My goal for this character was to make something able to farm Lokarr for his leveling set and clear Crucible to at least 150 but without making, in my opinion, a boring sword-and-board style tanky character. I achieved this goal and it was also fun and quick to level which was a nice bonus. 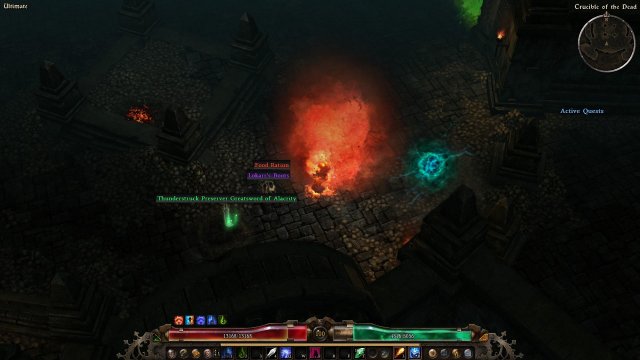 Detailed overview of my character: 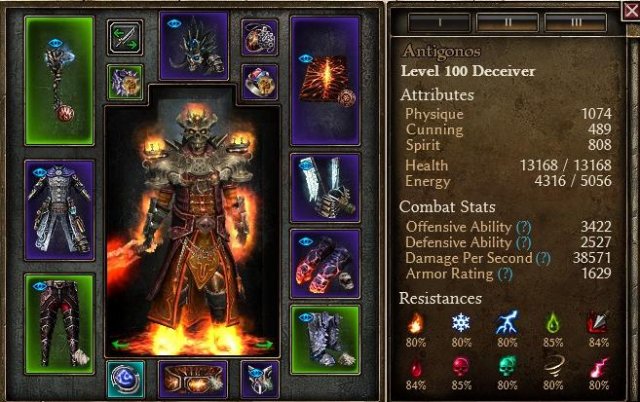 GrimTools works with shortcuts, so ‘C’ gets you to the Character Screen, ‘S’ to Skills and ‘D’ to Devotions.

I’ve always liked the Mage/Wizard archetype in RPGs, so when I made this character I decided to go with an Elemental damage caster with supporting negative Elemental resistance shred, especially as I had almost all the items and Legendaries I would need to support the build. Speaking of which, I must point out that this build is heavily gear reliant and the Monster Infrequents (MI) I have took a while to farm for (the weapon took over 800 Bargoll kills which is on the low side) so be warned. However, the boots can be crafted at a Blacksmith which can pose a problem if you don’t have enough scrap/iron bits but I have over 1,400 hours in GD so it wasn’t an issue for me.

With regards to damage, the character also doesn’t do massive single hits (highest I’ve had is 180k) but a LOT of moderate constant hits. I can get anything from two to four 30-70k crits every second, possibly more if I have free casts of my left click.

It also has mostly over-capped resists (Elemental resistance is ~82% over-capped for example), 26% Physical resistance, 2 on demand heals, 2 proc heals from Devotions, decent Defensive Ability (DA), 2.6k with Wayward Soul proc and 3.4k Offensive Ability (OA) with procs/self buffs. It also has -100% movement speed debuff on single targets and -60% AoE debuff. Nemeses are 90% resistant to slow mechanics but it can help to slow them just enough to keep out of range. Bosses/Superbosses are immune to slow.

My equipment choices were based on Elemental damage (obviously) but I also tried to fit in as many Mythical Legendaries with skill modifiers for negative Elemental resistance shred as possible. In combination with Devotions this character has a constant -120% Elemental Resistance with a possible total of -130% from the Relic’s Ignaffar’s Combustion proc. The amulet could be replaced with a faction crafted amulet called Heart of Malmouth for another -10% Elemental resistance but that would mean losing the Arcane Cataclysm proc which is a decent chunk of damage. The rest of the equipment is basically there for as much defense/resistances and + skills as I could muster.

The Cataclysm set I am using does mean you have to be within a 4m radius of your target to do the maximum possible damage, which is why I have all the heals and defensive procs to help with survivability. Though so far, only Ravager has posed a threat and I am still working on killing him solo, with a tanky friend he dies pretty easily in co-op. My problem with him is I get complacent and he ends smacking me in the face hard and fast and with 13k hp he annihilates me 🙁

I also chose the Cindertouch gloves for an extra pet proc, Cinderwinds, which scale with player stats and base damage do about 12k non crits with 3 up at any one time. The Fateweaver’s Raiment (chest armour) gives Prismatic Aura which gives 5% Physical resistance and 15% resistance to all other damage types. Another defensive aura I have comes from the Seal of Resonance component which gives 15% reduced duration to Stun/Sleep/Petrify/Entrapment/Freeze.

As you can see from the GrimTools link, apart from Tier 1 Devotions taken for the affinity most of my choices were defensive in nature. The only real damage Devotions I have are Rhowan’s Crown (for the Elemental Storm’s -32 Elemental resitance) and Blind Mage (for Elemental Seekers). The Blind Mage proc is nice as player-scaled pets share your OA and crit damage stats, amongst others, and I have ~65% Crit Damage so the Elemental Seekers have a large crit damage stat with their innate 62% Crit Damage.

You’ll want to try and get Word of Pain as near to Ultimate levels (26/16) as possible as it does a high amount of Elemental damage and can delete groups of enemies by itself. Deadly Aim is just a really good skill, not so much for the +% Damage bt for the +% OA. The Seal of Destruction is also very important for the granted skill Stormfire. It has no cooldown and with 165% Cast speed I can cast it twice per second and with it’s innate +25% crit damage I get 90% crit damage with it. This means it can crit for 30-50k’s twice per second which on top of all the other constant damage adds up quite quickly.

The only other skills i have are the two heals. Apart from the obvious benefits of the heals they give a large amount of buffs; +1045 Health, 32% Freeze/Petrify/Entrapment duration reduction, Aether/Chaos resistance from Word of Renewal and 138 OA, 12% Phyiscal resistance and 100% Acid/Poison resistance from Blood of Dreeg.

This build is really fun and simple enough to play overall, although gearing it might be an issue. As long as you remember when fighting Bosses/Lokarr to stay within 4m whenever possible so Arcane Cataclysm (which only has a 1.5 second cooldown) can max out your damage potential along with spamming Stormfire on left click, you’ll do fine. Normal enemies/Heroes/mini-Bosses just melt within 5 seconds, ususally before the first cast of Storm Box of Elgoloth ends.

The only thing I should mention is in Crucible: beware of the Aetherial Nemesis, Valdaran, The Storm Scourge. It’s not his damage that’s the issue but his effin’ teleport. I’ve only tried Crucible half a dozen times on this character but everytime I’ve gotten to 160 Valdaran spawns and ruins everything. He’s teleported me directly into Zantarin, The Immortal’s Vitality/% Health reduction shotgun attack, teleported me into the middle of Reaper of the Lost, Grava’Thul and Moosilauke and with their massive models and the arena I couldn’t move and ported me too far away from Iron Maiden so she Blitzed me and stunned me long enough for Grava’Thul to charge and annihilate me. In short, he’s an RNG based C U Next Tuesday that will wreck your day.

Also, as Lokarr is a Humanoid enemy he can spawn with random weapons so occasionally he will spawn with a big boy weapon and hit harder than he usually does so be wary of that, otherwise he’s a piece of cake.

Grim Dawn – How to Start New Games at Level 15+

Leveling up new characters can be a boring grind. This little guide helps you to save some precious time… and lets you start with 46+ skill points. Step by Step […]

For those of you who want to unlock the higher difficulties without playing through on normal first. ContentsGuide to Unlock Elite/Ultimate DifficultyInstall GD StashLocate Install FolderLocate Save FolderImport, Edit and […]