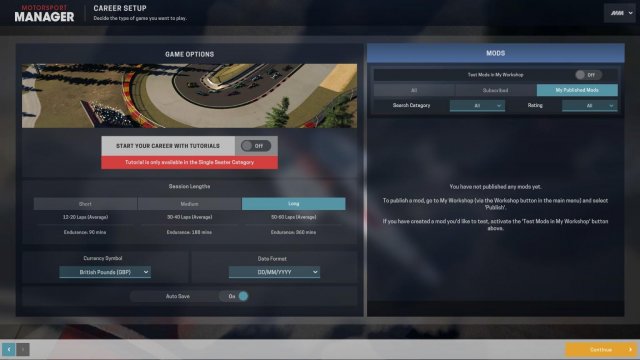 When starting a career the first thing you can chose is the game options. The first thing you should do is to turn off the tutorial. (If this is your first ever playing Motorsport Manager do not start your own team).

The only real choice in game option is how long the race will be. I myself prefer long race but if you choose short you can gain an advantage, that advantage is slim so chose what ever you your self prefer. If you haven’t played enough to know your preference just go with short. 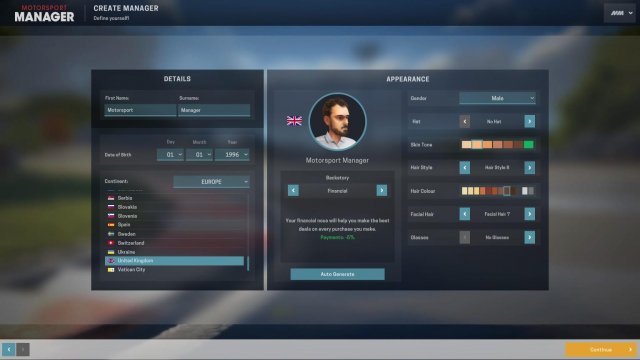 In create manager the only choice that will affect your career is the choice of backstory.

Have no advatages. It would be stupid to choose this one.

Dosen’t offer very much. You do get to suggest a rule for free which means you save a million, but you have to suggest a rule every season in order to save a million and there are easier ways to save money. You also get +4 vote every season, which I consider to be irrelevant because it is not very useful. I usually have 2-4 votes saved up after 2 seasons, because you only vote on rules that matter and if they don’t you abstain.

Ex-Driver is my favorite but it is not very useful in the begining when starting a own team. Because the increase to the development for your drivers is only useful if you have drivers that have potential and when you start a own team your first season drivers have no potential. This might be good in the later season but it dosen’t give you a good start. Ex-Driver also gives a boost to of +3 to feedback which is awesome, but it dosen’t make up enough for me to recommend you to use this backstory when CYOT.

Ex-Engineer is the first backstory I accept that you choose when starting a CYOT, because -1 day build time is always good but in the begining finnishing a part one day earlier doesn’t make much different since your biggest problem is still going to be to get up the reliability and preformance of the part you produce.

This is the one that I recommend. Financial gives you -5% on all costs, which is awesome since in order to get a good team you have to have money. Everything costs money that makes a team good, like HQ upgades, drivers, staff and car parts. With financial background you can save around 2 million in the first season that you can use to other things. 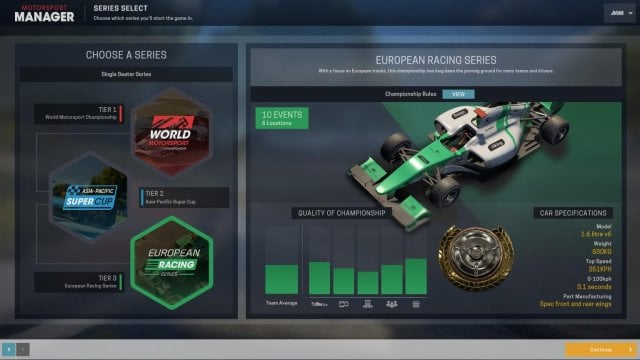 When starting a CYOT career always start in TIER 3 EUROPEAN RACING SERIES. If you don’t you are most likely to end up their anyway. 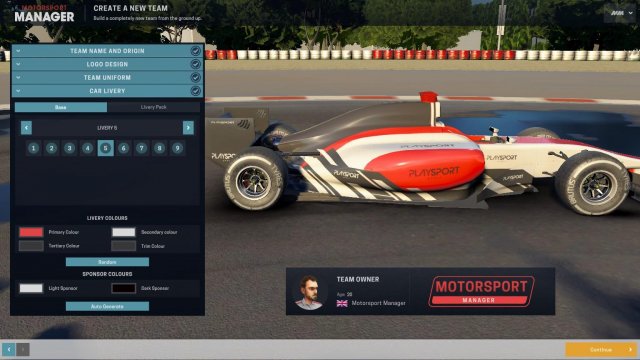 This screen have nothing that will affect your team. 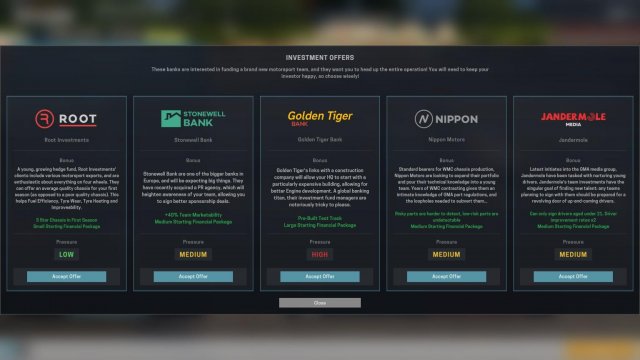 There are three original offers and two that you get after completing challenges.

Jandemole you get from completing a challenge. This one is not good for CYOT if you don’t want to change your self because most drivers are over 21. The medium financial package is good but you can get more or equal money with a better investor.

Nippon you also get from a challenge. This one you could use because low risk part will not get detected by the GMA and you get a medium financial package. Personally I don’t like this one because it feels like cheating.

People often goes for this one for two reasons, the low pressure and 3 star chassie. But I consider this to be the worst one you could use, because you only get a small financial package, pressure is irrelevant if you are realistic with chosing in which possion your team will end the season as and finally a 3 star chassie in the first season will at most help your drivers get 1-2 possions higher in some of the races, which over the course of the season will not really make any difference.

The best one is Golden Tiger Bank, you get a large financial package and a pre-built test track which is a free 8 million. (If you do deside to start in tier 2 Asia Pacific Super Cup, do not chose this one APSC has spec engine and the test track has no effect.) Having alot of money at the start is very importat. 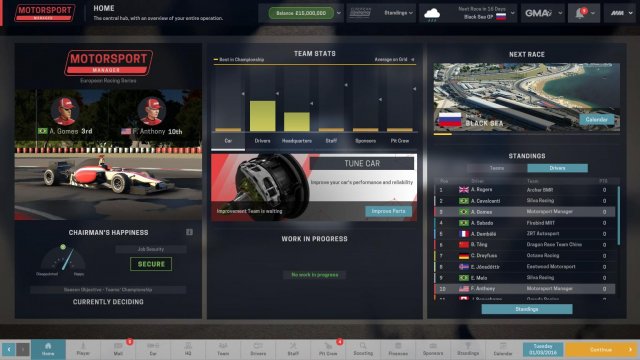 If you have chosen everything that was in the summary, then here are some first day tips:

First check the GMA to see what 4 rules that you will be able to vote on during the season. By doing this you can plan out which rules you want to vote for, against and which to abstain from in order to get more votes for the importat ones. 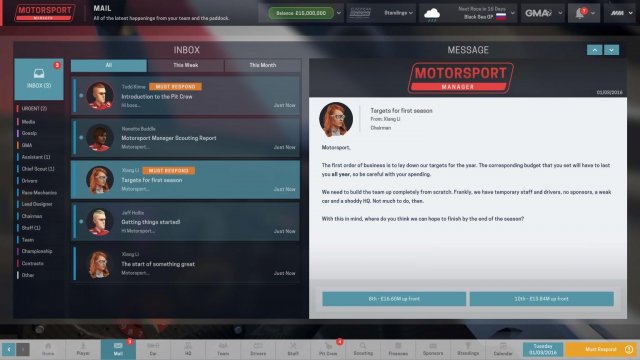 In the mail screen you have a mail from your chairman, where you can chose which postion your team will be on at the end of the season. If you think you can do better than what the chairman thinks you will get more money, and this is the only time I say that you shouldn’t chose more money, pick that you will end the season 10th, because if you do good in your first season you can end up 9th but you will have made your chairman angry if you said you would end the season as 8th. 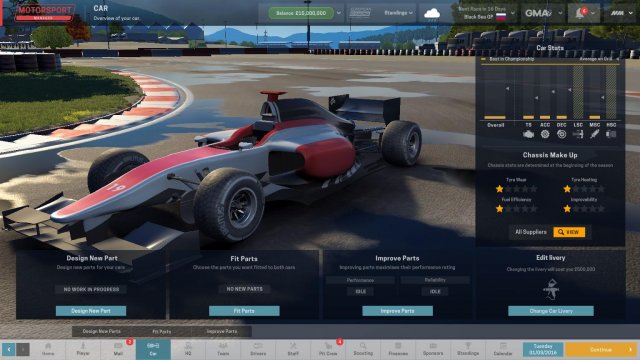 In the car screen start improving the reliability of your engines and start building a new part. 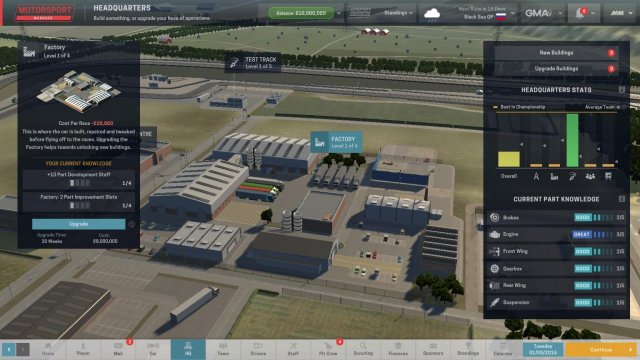 Go to the HQ screen and start building factory level 2, I know it costs 8 million but you will have more than 28 million if you have done what I said and getting level 2 factory is very important since it will help you improve the preformance and reliability of your car parts much faster and that will mean that you will have a better car faster. 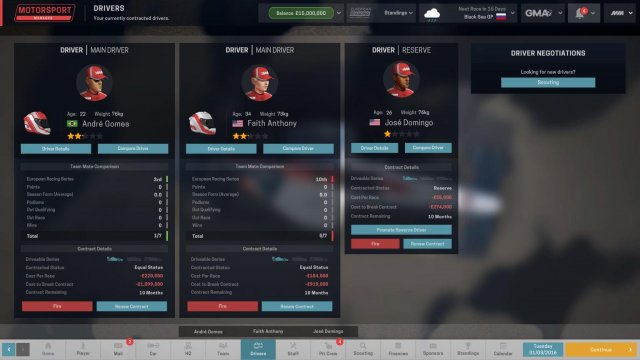 If you want to save money go to the driver screen and fire your reserve driver José Domingo because you can fire him for half the salary you would pay him over the 10 race season. So by firing him you basiclly save half his salary. 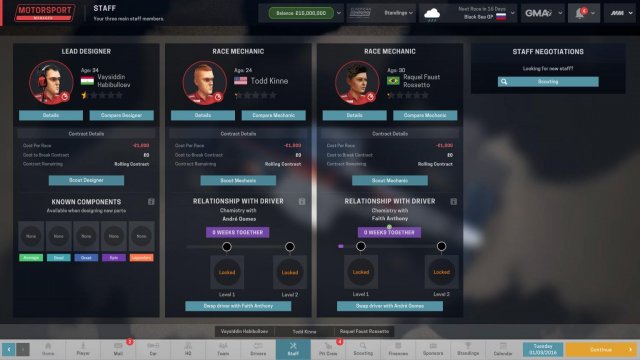 The next thing you should do is hire staff. You can hire who ever you thing is the best for your team depending on how you run your team. 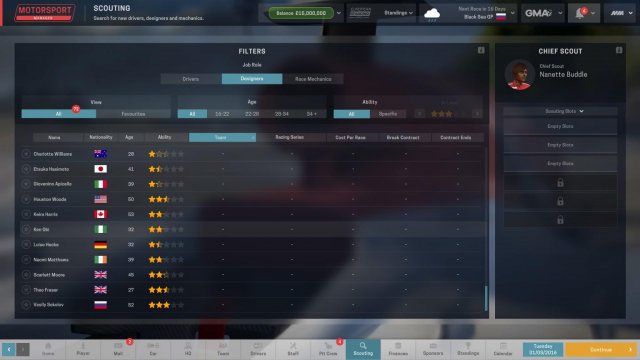 For the role of lead designer I recommend that you get one of these:

They both have the trait of unlocking an additional good component slot which is awesome in the begining since it will help you improve the car parts faster. 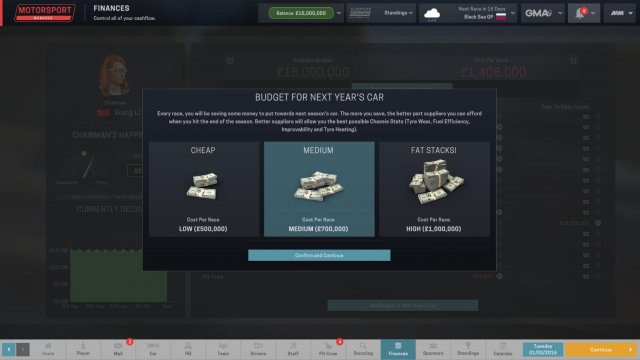 The first day is the one day with the most to do. After you have done all these you can start to advance time.

If you have choosen short races you can attempt a one pit stop races on the following tracks:

It is easiest to successfully do it in Milan, Italy but it is still difficult. In the other two it usually doesn’t work but if you think you will be last anyway you can try because sometimes it works.

List of all designers & mechanics stats and perks with description and tips. And the other part of the guide is power start with your own team. (You can use […]