Here I will show which things you need to do in blackwake if you want to be successful winning games with your team. 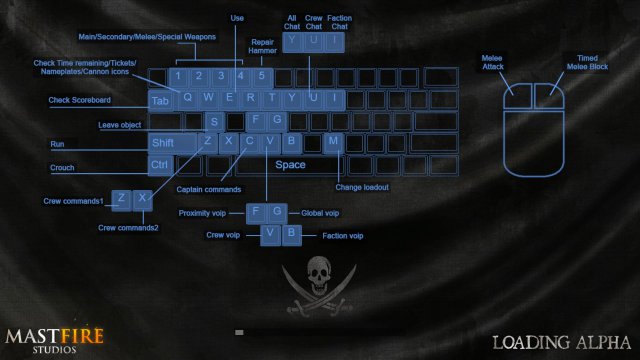 First of all when you join a server you will be asked which faction you want to enter. You can choose from pirates and the navy but it does not make a difference.

After that you can decide which ship you want to spawn on. Then you can select a main weapon, a side weapon, a melee weapon and a special equipment. In addition you will also spawn with a hammer(head over to “Repair your Ship” for more information). There are four main weapons at the moment: The standard musket, the blunderbuss, the nockgun and the hand mortar but you can only aim accurately with the standard musket. The other ones are more like shotguns and are used for close combat. I highly recommend trying out the hand mortar because it shoots bombs which is good for killing multiple enemies at once. Next we have the side weapons which will allow you to have even more firepower and maybe even save you from death when your primary weapon has no ammo loaded. 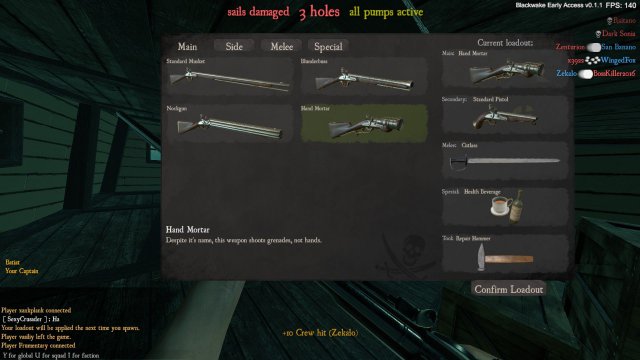 This time we have 5 options we can choose from. There is the standard pistol, the duckfoot, the short pistol, the annley revolver and the matchlock revolver. Here i would use an pistol with more than just one gun barrel because you will have an higher chance on hitting an enemy or maybe even more. Of course it will take longer to reload. 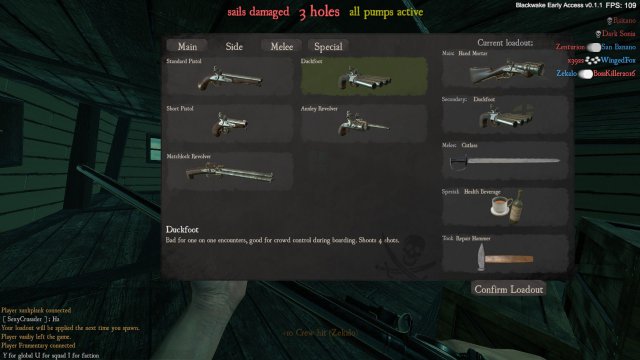 Next we have the melee weapons but it doesnt seem to me that it makes much difference which one you will be using. Maybe the dagger and the broken bottle deal less damage and attack faster than the rapier and the cutlass. Anyways you wont be using these weapons that often. 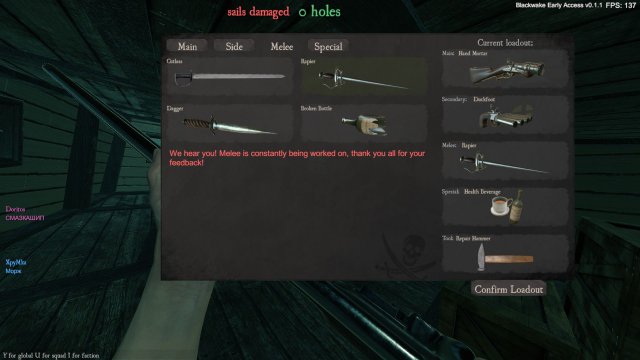 At last i will talk about the special equipment you can take with you. First of all there is the the health beverage which will be different in each faction. If you join the pirates you will have rum and in the navy faction you’ll have tea. This item will recover health. you will need to drink about three to four times to get back to 100% health. Then there is a tomahawk and a grenade. If i would have to decide from these two I would rather take the grenade because you have a higher chance of hitting an enemy than with a tomahawk. 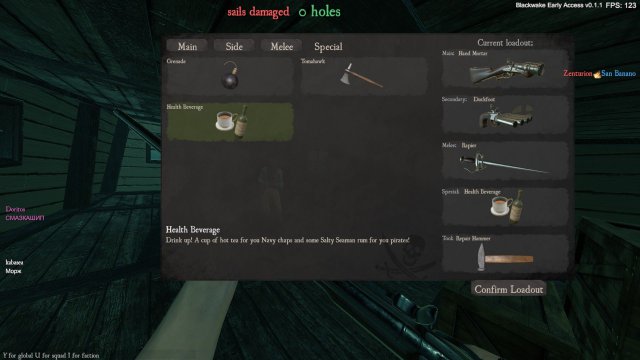 Next we go over to the main things you have to do on your ship.
There are several things you will have to do to keep up your ship: You have to repair your ship, pump out the water which is inside your ship and extinguish fire.

You will always spawn with a hammer which is used to repair holes, sails, this long pole right on front of your ship and cannons. 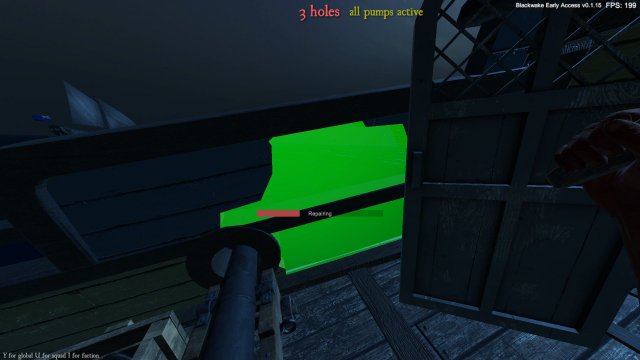 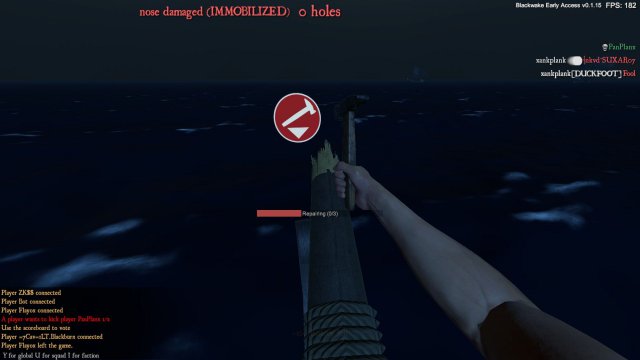 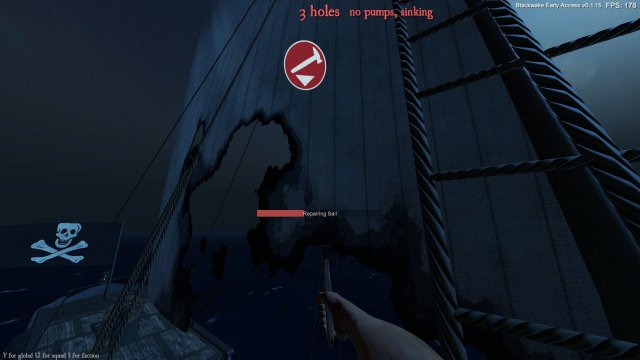 There are pumps on every ship which you can use to pump out all the water. On the Hoey the pump is in the middle of the deck right next to the main mast. On the Galleon there are two pumps
on the lower deck. 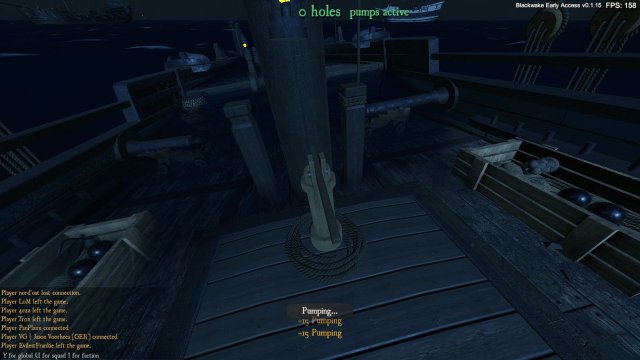 If you look around you will probably find some buckets on the deck. I dont know if there are buckets on the hoy too but on the galleon definitly. Just pick one of them up and left click while you are aiming at a bruning spot. 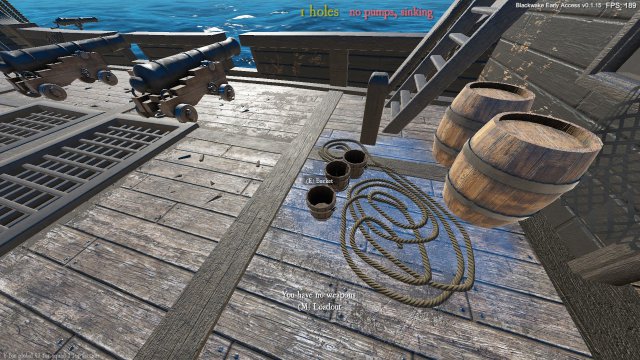 You have many ways of destroying other ships or killing people.

The most obviously method is using the cannons on both sides of your ship. Before shooting them you or your mateys need to power it with some gunpowder. You find gunpowder in these boxes beside the cannons. Next you will be choosing a ammunition type. You can choose from a normal cannonball or the grapeshot. You should use cannonballs if your target is far away and if your target is right next to you then you should use the grapeshot. If filled up with gunpowder and an ammo type you will need to push into the cannon with a ramrod (You will automatically equip a ramrod if you need it). Last step is just aiming for a good moment to shoot(by the way dont shoot randomly you will loose points). 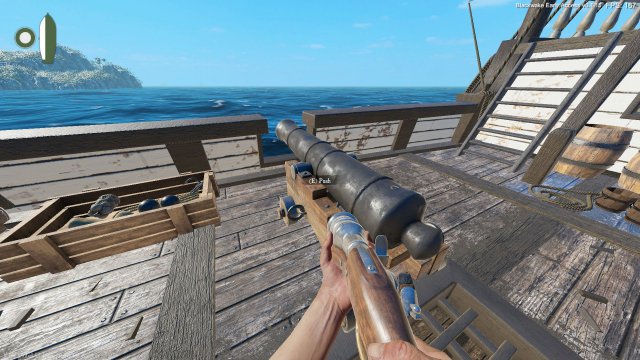 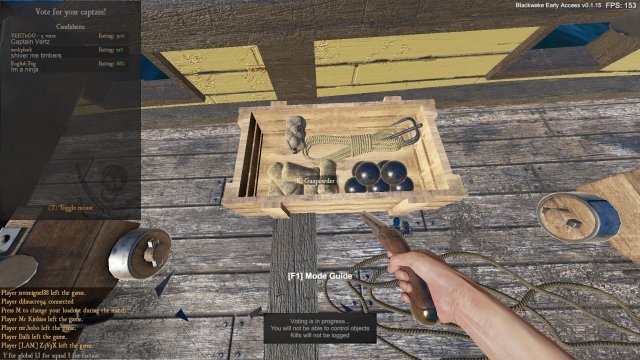 If one of these crates are empty you might just go into your ship’s bow and pick up a supply crate. If picked up it will consume 2% of your total resources. 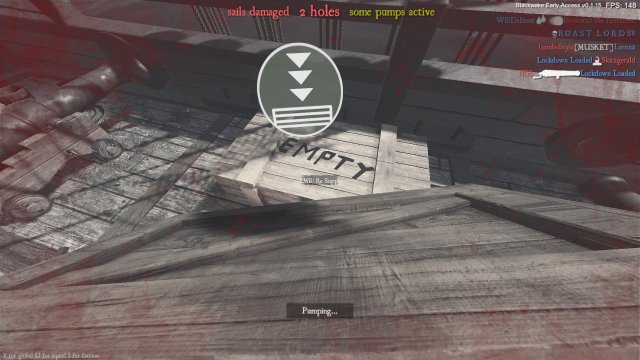 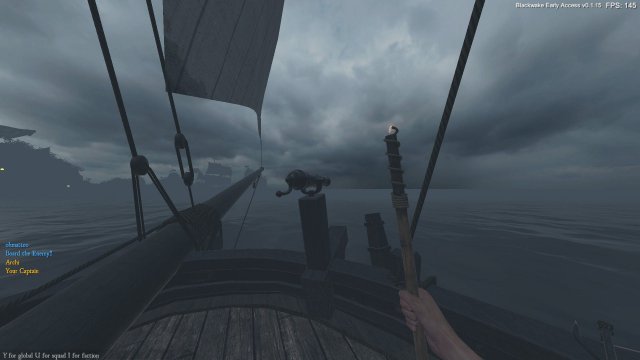 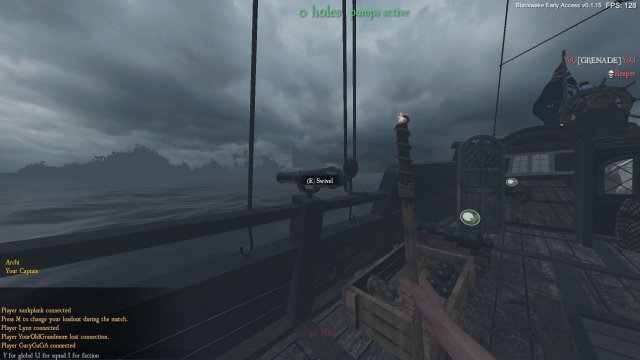 As Captain of the ship you may also just ram the ship you want to destroy but care your ship will also take some damage.

Blackwake – How to Aim Your Ship

There seems to be a lot of confusion as to what you should be doing if your captain isn’t barking orders. This guide aims to fix that. ContentsThe PlayerChoosing a […]