This is a basic guide on how to get started on Shaman, the easiest T2 class.

Getting Started with Shaman

Unlocking Shaman is usually pretty simple. Do a Prodigy run using character xp gear and stacking True Sorcery until you hit character level 175, then get to e300 using whichever class you like.

After you have Shaman unlocked you can try a run. You will probably have around 750-900 attribute points to spread around. This guide was written shortly after the implementation of the new 200 attribute perks so it may not match suggestions from older guides.

The priority here is to get the key 200 perks for this class. Int, Ins, Dom, Pat. The rest are optional and can be tailored to your items. If you are using Legacy boots you can stop at 160 Ins and let the boots get you to 200. Dump stat for me is emp for falconers gear. Note: I was wearing Bite Sleeves in the stat photo to equip Falconers.

Next you will need 3 sets of items. 1. Pet leveling gear (optional but speeds things up), 2. void mana gear, and 3. burst gear. Each set of gear will have a set of spells to go along with it.

Lets start with pet gear. Most people will have a decent set of Falconers unlocked by this point.
Using at least 4 pieces will get you the fastest pet build. For long idle runs you may want to swap out the shoulders for Artificers to boost dust farming. You may note I am using Chiropteric Rod instead of Branch. Rod works better for shorter runs and multiple bursts. If you prefer longer runs with 1 big burst you may want to swap that out for Branch. 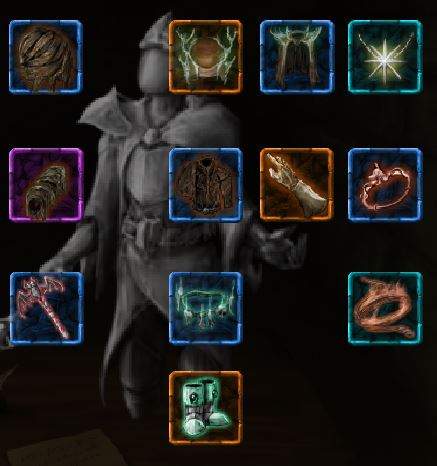 The spell set to use when leveling pet is usually this.. all on reckless:

Mostly you are working on getting your autoclicks and spell casts stacked.

For your first run you may only want to level your pet for a few hours before trying a burst. In later runs you can extend that more and more for bigger chunks of mana.

Set #2 is for void mana build. 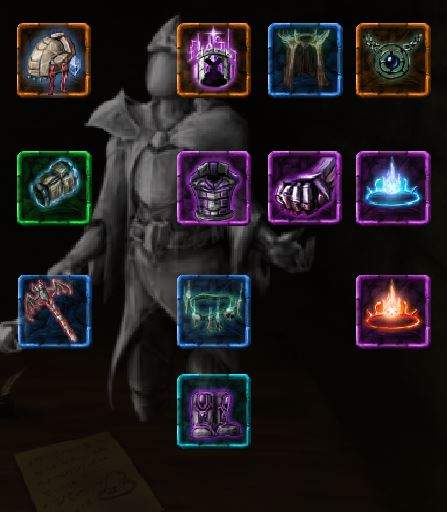 Your void mana gear should use at least 3 pieces from the Nether’s Embrace set that boost void mana per entity. Void profits won’t matter for this set since you won’t be wearing it when you burst. This is purely for void mana build. Don’t forget the legacy boots to get you to 200 Ins so you get a huge void boost.

Spell set for void build up is this.. all on reckless:

I usually hit max void within 10-15 minutes. After your void mana stops going up you are ready to burst. 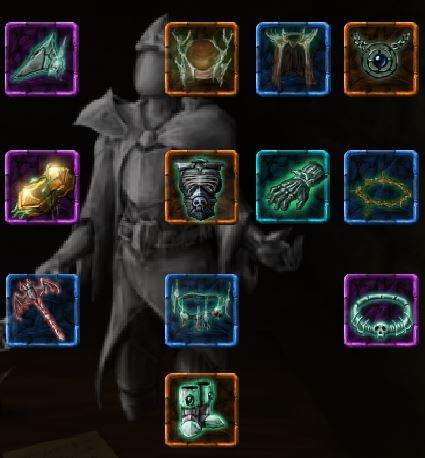 There are several ways to get good results here. This set is to boost autoclicks/crits/idle. Most are the BiS (Best in Slot) gear but you can swap these out for whatever you have that is leveled up and gets better results.

The burst spells I use are these… all reckless:

Ok so now you have the basics. You may want a bit of strategy to get you moving along….

1. Start a run and choose necro or druid then Shaman. I use a combination of pets to boost sources quickly. I start with Spellhound then swap to Anima (using Easymind Hat) for a bit then Simu to top all the sources off. Make sure you have whiplash equipped to speed up Simu.

3. When Simu has finished giving you sources, swap to Risen Giant. Equip pet set and spell set #1 and wait a few hours (or a few days if you are really patient). Collect dust from time to time. Collect bats if you are using Batstick.

4. After about 12 hours you should be at 1e7 autoclicks. You can now swap to void mana set and spell set #3 for void build up. Build up void mana for about 5 minutes then change to burst set and burst spells. Put all on reckless and let it run for a couple minutes. Then swap back to void build set and repeat step 4 as often as needed. This should get you e2-e3 every 12 hours. If you have good gear it will be faster. If you had bad gear it will be slower and you will need to wait longer. If you get stuck in a run that isn’t producing much profits just upgrade some gear or do some trials to get to the next big boost. Your big boosts will be upgrades to profits, hero power, pet power, summoning spells, incantations, and anything that multiplies profits of Forbidden Tomes.

To wind all this up… I am new to guide writing so I am happy to read all of your suggestions and criticisms (not really..I will ignore you). I am not all that smart (I am brilliant) so you should experiment and I am sure you can find ways to improve upon this guide and push out far higher profits for yourself (very unlikely) than I could get.