How to play Horace: the easiest, and dumbest hero in Armello. 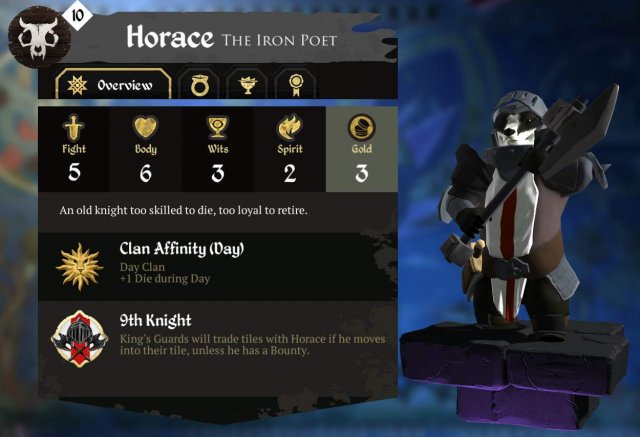 As a bonus, he finally gives some representation to the angry-short-guy personality type. Props to LoG for being inclusive.

You could try to mitigate your weaknesses with amulets and quests, but you’d likely be giving up your quest rewards in doing so. If you want to minimize weaknesses, go play a jack-of-all-trades character like Amber. Horace is for BRAINLETS. MASCULINE BRAINLETS.

Sprint gets an honorable mention for the rare case where you didn’t decide to pick Celestite as your ring for some reason.

You aren’t going to be fighting guards (hopefully), so Serendibite is pointless. Black Opal can help hide you from those nasty spellcasters, but you shouldn’t waste your precious AP on making sure your turn ends in towns. Amethyst is useless because you shouldn’t draw from the spell deck.

You know what they say about guys with small hands *cough*

Since you’re going all in on the fighting stats, learning how to manage your tiny number of cards is the only thing you’ll really have to think about when playing Horace. Basically, just follow these guidelines:

Pretty obvious rules. Don’t stress about them too much or get too attached to your cards. It’s amazing how every Wake the Trees will find it’s way to you.

Countering Horace is pretty straightforward. Treat him like you would any other strong, but stupid, hero:

My Thoughts and Recherche Since many people seem to struggle with this achievement and I think I quite well figured it out, I want to share my information to you […]

I’ve often observed other players under-utilizing Griotte or even passing her off as being not worth the effort to achieve victory with. The truth is, Griotte can be an incredibly […]

Take Decay and Turquoise. Get rot treasures when they present themselves, go for spirit stones otherwise. Get a starting set of equipment and start milling the spell deck for rot […]