This guide attempts to explain the various personal attributes in the game, from the basic stats that help establish your character, to those that dictate combat.

It’s an essential first step in understanding any game that you have an instinctive knowledge of the character you control. This is done by knowing their attributes. Thankfully, attributes tend to be similar across many games and genres, which makes it an easy (though less than ideal) option to rely on assumption rather than knowledge in order to win more than your fair share of encounters.

In this short series of mini-guides, we’re going to cover each of the game’s attributes in detail, so that we can explain why each matter and how you should approach improving them.

We’ll start with the most obvious and fundamental Basic Attributes, which form the basis of character ability and advancement. But before we look at the attributes themselves, there are a couple of things you need to be aware of.

The first is that you can massively affect your Basic Attributes before your character even exists. When you select ‘New Character’ you are given a series of three questions that, apart from explaining your presence at the start of the game, allows you to augment your Basic Attributes by 12 points (4 points per answer). Each Basic Attribute starts at 17, so, if you choose answers that add to your base Armour attribute, you can start the game with an Armour level of 29 – which equates to +36 to your Defence Attributes. Clearly, if you have a particular weapon you wish to specialise in from the start, you should tailor your answers accordingly. 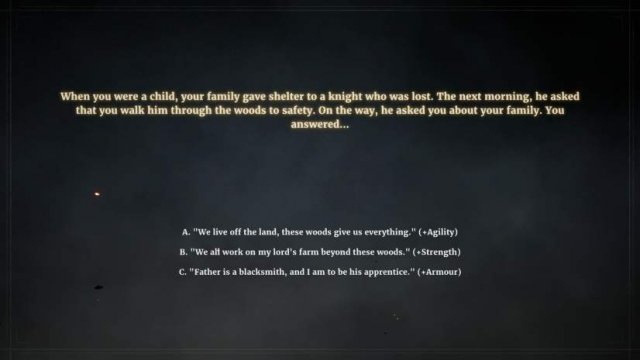 The second thing to note is that you receive a single Attribute Point whenever you reach a new level, which, since you start at level 1 and should reach level 10 within a few of hours, means you can make quite a difference to your character very early on in the game. Of course, it helps to know about each attribute in order to understand what those differences could be, so let’s look at them individually:

STRENGTH: As you might expect, Strength affects how heavily you strike in combat. It’s an important attribute for melee warriors who wish to rain down crushing blows upon their enemies.

AGILITY: As Strength is to a melee warrior, so Agility is to those armed with a bow or musket. However, Agility isn’t simply about ranged combat. Generally, Agility allows for greater penetration, but Strength delivers more damage. Don’t worry, we’ll explain the distinction in a subsequent guide.

TOUGHNESS: Not all characters can rely on Armour alone and those that are fast-moving probably would rather rely on their Agility to avoid incoming damage. In either case, an individual’s Toughness is their last line of defence. Once Health reaches zero, it’s game over. 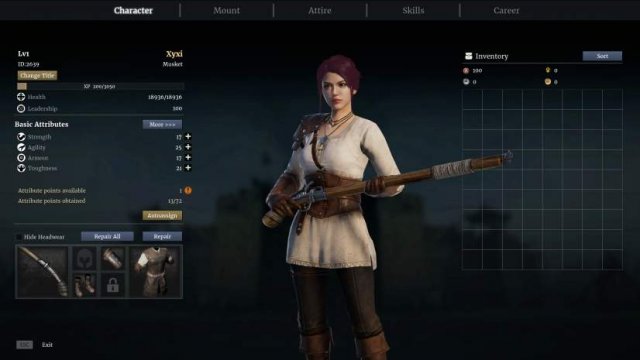 General Attributes are a kind of catch-all category that excludes those you can allocate points to (Basic Attributes) and those directly related to attack and defence (Combat Attributes). As a rule, they increase as you level, although some are tied more directly to what you have equipped at the time.

HEALTH: Each character (with a base Toughness of 17) starts with 16,700 HP, which is increased by the type and number of armour items equipped. Each level of Toughness also adds +100 HP to the total. Health can only be lost during combat encounters and is replenished through special abilities during combat.

LEADERSHIP: Leadership determines the number of units that a warlord can deploy in battle and, just as crucially, on the campaign map. Each player starts the game with 100 Leadership points, which can be increased through levelling and with the right equipment, up to a maximum of around 800 (lvl 60). For reference, a unit of basic Woodcutters (Rustic Age) requires just 40 Leadership points, while a single unit of Fire Lance Cavalry (Golden Era) will require 360.

STAMINA: Stamina is used during combat encounters when sprinting and rolling to evade damage and is replenished when not sprinting or rolling. Stamina has no bearing on damage or completing special abilities, only on whether a character is able to quickly engage or disengage the enemy.

CAPACITY: This has nothing to do with what’s in your inventory and everything to do with what you have equipped. If you can keep your Capacity between 20% and 70% of your maximum, it will have no effect. Above 70% and it will inhibit combat (reduced Stamina) and below 20% it will enhance your combat abilities.

MOBILITY: Not so much an attribute as an amalgam of different values that cast you either as a fast-paced assassin or a lumbering beast of war. As you level up, especially as a heavily-armoured warlord, you can expect your rating to change.

Combat Attributes are the stats that underpin the entire system of attack and defence. There aren’t many to worry about, thankfully, but how they interact with other attributes is an important part of understanding the part you should be playing in every combat encounter.

There are a few ways to look at Combat Attributes. The easiest is to categorise them by damage type, where there are three ways you can hurt an enemy (leaving aside more skill-based effects like poison and fire): either by poking at them with the pointy end of something (an arrow, sword tip or spear), hacking at them with a blade or sharp edge (such as a nodachi, poleaxe, glaive), or bashing them with the butt-end of a polearm or musket.

How much of each type of damage caused will depend on the weapon, of course, but there are three sets of personal attributes that determine the final outcome, Piercing Damage (affected by Agility), Slashing Damage (Strength) and Blunt Damage (Strength). Some weapons are able to deliver significant amounts of one type of damage or lesser amounts of all three. Some, like spears and muskets, deliver different types of damage from each end.

The amount of damage caused will depend on your Armour Penetration attributes, of which there are again three types (Piercing, Slashing and Blunt). There’s an important distinction to make here because while an arrowhead may be able to cause more piercing damage than a spear, on account of the speed of entry into bare flesh, arrows are more likely to lose a lot of their energy by having to penetrate armour.

While your Strength attribute is important to delivering Slashing and Blunt Damage, Agility helps to increase Slashing and Blunt Armour Penetration. What this means is, unless you’ll be wielding a weapon that consistently delivers a single damage type – such as most ranged weapons – it pays to not let your Agility fall too far behind your Strength. As a simple rule, if Strength is the primary attribute for damage, you’ll need to consider Agility if you want to maximise penetration – and vice versa.

Finally, there are the Defence Attributes, Piercing Defence, Slashing Defence and Blunt Defence, which are directly affected by your basic Armour attribute, as well as any armour items you have equipped. Most basic armours absorb damage equally well across the three types, with heavy armour being more protective (and more restrictive) than light armour items. As you progress, however, you will discover more varied blends of armour that reduce the impact of certain types of damage over others. So, for example, you can tank penetrating attacks more effectively than other damage types.

As well equipping and levelling your Warlord effectively for combat, the same basic stats apply to your units and trusty steed. Needless to say, fitting yourself and your units in ways that are complementary will be advantageous, so that you can either offset the weakness of your units in defence, or support their strengths in attack. Likewise, you will have to be mindful of overall group tactics if you are fighting as part of a cohesive force.

Compile of different topic that is relevant to new players that would benefit everyone, and I won’t have to repeatedly talk about the same thing to 100 different players over […]

Other Conqueror’s Blade Guides: Triggered’s Guide to Rebel Camps. Guide to Attributes. Classes Guide. Getting Started I am making this quick little guide to help answer some basic questions that […]