The Trendy Game in Mabe Village is home to one of the most fun mini-games in Link’s Awakening and also one you’ll likely spend a good deal of time in since it’s the catalyst for a few main and side quests, plus some fun collectibles. The game is in the southeast corner of your starting town and you can access it almost immediately after you’ve found your sword and can start slashing away at enemies and rupees to collect the game’s ten rupee entry fee. 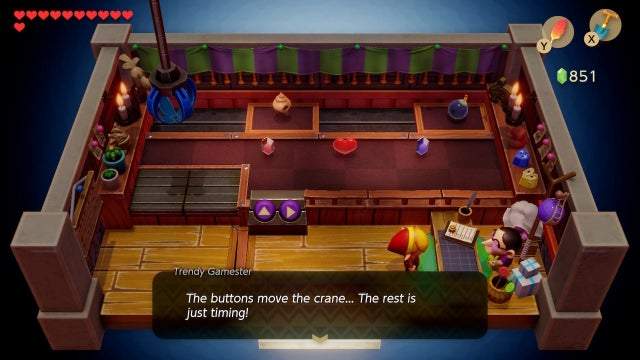 When you first enter the shop, you’ll see various iconic Zelda items like hearts and rupees, but more importantly, a Yoshi doll based on the iconic Nintendo character. You’ll want to go for this prize early on since it initiates the game’s long and rewarding trading sequence – an island-wide bartering quest that has you interacting with strange and wonderful characters all of the map and exchanging bizarre items until you obtain its final reward. This quest actually weaves into the progression of the main game, so you won’t want to miss it.

Among other items you’ll see pop in and out of the racks at the Trendy Game are two heart pieces, chamber dungeon tiles for Dampe’s Dungeon Maker mode, collectible Nintendo figurines that can be placed on pedestals around town, as well as rupees (the red ones are worth twenty and the purple are worth fifty) plus bombs, magic powder, and spare shields in case yours get devoured by Like-Likes in battle.

Winning the Trendy Game is fairly easy: simply pay the entry fee, walk to the giant directional buttons, and eye the prize you’re going for. Start by lining up your horizontal shot by holding down the “A” button and then releasing it when it’s directly beneath the center of the prize you want. and then your diagonal shot with the “X” button. You’ll see a small light beam shining down on the spot where your crane claw is about to land, and with any luck it will pick up and carry an item to conveyer belt for you to keep forever.

Items in the front row of the game will stay in one spot, but the two items in the back row are a little trickier since they’re on moving platforms. However, it’s fairly easy to predict where the claw will land with the right timing. Line up your horizontal “A” shot beneath the furthest point an item will move to the right on the conveyor belt, and then line up your vertical “X” shot to the very top of the room (the furthest point in a vertical line that it will possibly go, so basically hugging the top wall) but don’t release it just yet! You can actually hold this button down indefinitely, so wait until the item you want is as far as possible from your claw and then release it immediately as it begins its path towards you. The claw should descend and grab the item just as it starts to head back. If you pick it up and drop it, don’t fret, as the item will likely land on the non-moving surface and you can spend a few more rupees to keep trying to grab it and bring it to you. If the item falls between the conveyer belts and keeps getting knocked back and forth, simply exit the shop and reset its location back to its original place and try it again. 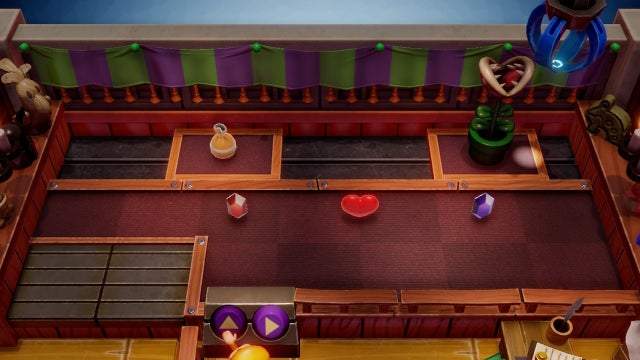 The purple rupee in this game (worth fifty rupees) will always appear in the same spot – although it does tend to cycle out with other items – and will let you play the game five more times. Grab it, and then exit and re-enter the shop to make it reappear, and then grab it again. Eventually you’ll get so good at grabbing this particular rupee that you’ll be racking up money in no time. By the way, this is a is a great way to quickly farm for items in the shop a few screens up. If you need to make a quick ten rupees to play the crane game again, the large grid of grass and bushes just north of the shop is usually rife with them, so you’ll never be a few sword slashes away from another go at the crane game. Keep in mind that items will cycle in and out as you clear them, while others will show up later as you advance throughout the main quest, with some even appearing after you’ve finished the game entirely. The Trendy Game is a fun, rewarding little mini-game that will have you racking up rupees so you can buy things like shovels, heart pieces, and more from the other shops in the game and with a little practice, you’ll be awesome at it in no time at all!

The Legend of Zelda: Link’s Awakening Guides: How to Get the Ocarina and All Songs. Key Cavern Dungeon Walkthrough. Trading Sequence Guide. Fishing is a simple minigame available in The […]

The Legend of Zelda: Link’s Awakening Guides: Fishing Pond Guide (Minigames Tips and Rewards). How to Get the Ocarina and All Songs. Trading Sequence Guide. ContentsKey Cavern Dungeon WalkthroughSmall Key […]