Various bits of information that will get you through certain bosses, or are just neat to know.

This guide covers various bits of gameplay advice I’ve written down while playing the game. There’s a real scarcity of guides elsewhere for this game, so… here you go. 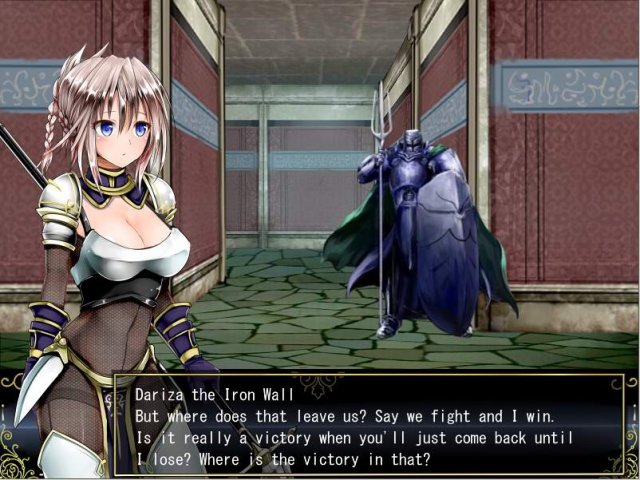 While in town, you can open the menu to change your equipment, use items or save by right-clicking.

To set your passive skill, click on the field in the status menu.

Casting a Thunderbolt during the same or next turn after casting Fayadaan (Luna’s water spell) will cause additional damage to all enemies.

The Feather Anklet prevents you from activating floor portals, which can help you access certain chests. If you’re trying to use a portal and can’t, take it off.

Octuple Assault requires some combination of MP buffs, a teammate feeding Luna with Mana Drops, and/or Spirit Pill (zero MP consumption) to be effective. It does incredible damage near the end of the chain, though; at level 25 the eighth hit can do over 2k damage.

To access the Street Stall at the Harbor, you need the Hunter’s Mark. Go to the Balsa Wilds and collect 10 Black Furs by farming the wolves (use the random encounter area in the bottom-left of the first level), then give them to the hunter in the area. He’ll give you the Hunter’s Mark accessory in return. (Remember that you can only carry 5 of any item at a time, so drop the furs off once you have the first 5).

Once you have the Hunter’s Mark, equip it to shop at the store. He’ll sell some stuff you can’t get anywhere else, including a few handy accessories, the Gunpowder Bomb and Lucky Coin.

(You need to have the Hunter’s Mark equipped, even if you’ve already shopped there before)

You need to enter the Underground Slave Market by day 8, otherwise you get a game over.

If this happens, go to the Crossroads and the fortune teller will offer to send you back in time: 1, 3, or 7 days. You retain your money, stats and progression towards completing the quest.

If Luna is a virgin, you can get the full 200,000 dinars for the slave broker by accepting the pimp’s “special offer”.

During street prostitution, if the client accepts your price, you should Renegotiate to raise it. Try to get the “correct price” for 2,000 bonus dinars.

To survive the needed 15 turns: Switch to the Ceremonial Spear, which heals its target. Attack yourself or your buddies when you run low on HP; otherwise let their attacks and Ray Pentagram wear them down.

There isn’t any reward for killing any number of the infinitely respawning enemies (AFAIK). But you may as well make them pay for their crimes.

You’ll want to be at least level 23 for this, and even then it’s a matter of luck; level 24 or higher is recommended. Farm enemies on floor 7 a bit if needed. You can steal Life Elixirs from Murtaziqs, too.

The required builds are shown below: 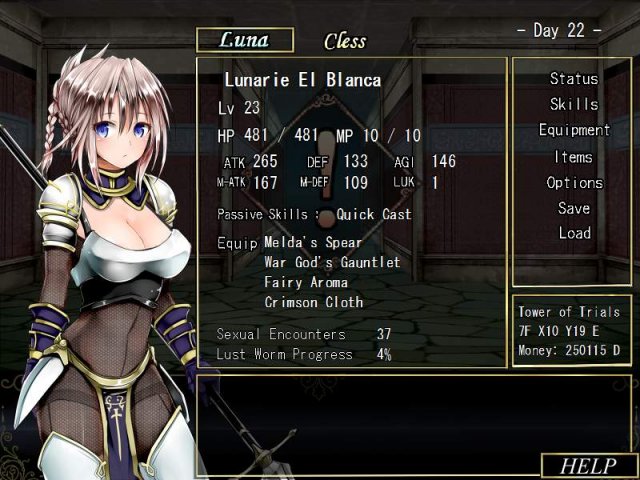 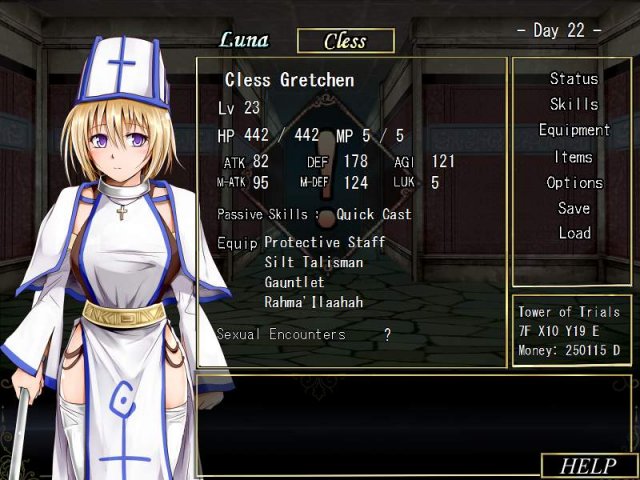 First skill (in your quick skill bar) must be Counter for Luna, and Bless for Cless.

Go into battle. Luna will quick-cast Counter, then every time Orman hits her, she’ll hit him back. Eventually you should kill him without ever getting an actual action. (Hold down Ctrl to make it go faster)

During the first phase, throw Gunpowder Bombs at him. Seriously, just do it.

Or steal his Inferno Blade, equip it along with bonus-damage items, and spam Dagger Dance. But this may require a high level to work.

You need a really strong character to even stand a chance. I recommend beating the Tower of Trials first.

Gunpowder bombs have no effect in the Tower of Trials or on the postgame Arena enemies.

This accessory upgrades Ray Pentagram. In addition to the arrows every turn doing more damage, it adds the Gamma Ray effect which causes massive all-target damage to the enemy.

Note: Gamma Ray will only be cast if the damage-over-time effect is not currently active (not yet cast, expired, or dispelled).

Found on Tower of Trials floor 8.

This item removes all buffs and debuffs from everyone in the battle, friendly or enemy. Obtained by completing the Tower of Trials.

Effects: KOs a party member instantly (or drops them to 1 HP if on campaign map). Not much point to this unless you want to see a defeat scene.

How to obtain: Available at start

How to obtain: Purchase from Item Shop in the second half of the game (after the dungeon raid).

How to obtain: Talk to the Man who Lost a Bet at the Dawn Shepard Bar. He’ll ask for 50 denars, which he uses to gamble again. If he wins, he gives you an item; the fourth time in the game this happens, it’ll be Recipe 3.

How to obtain: Tower of Trials 1F boss

Take Airi down to the bottom of the Shandora Ruins for a hidden boss. Beating this will get you Airi’s final weapon.

Take Cless and talk to the Antiques Dealer in the church for a sidequest.

Using Analyzer on a party member gives some “information” on her, including her physical measurements, hobby and “weakness”. Oh, Japan.

In the Qanat, you can use the Feather Anklet to walk through the water areas. Some of the channels lead outside the map and can lead to unusual items.

During the final battle against the parasite, Jill will stop you if you try to eat any of Luna’s cooking.

Lilitales – All Maps and How to Unlock Gallery Entries

A guide to all maps, and how to unlock all gallery entries. ContentsWalkthrough (Contains Spoilers)Prologue and Day 1Common RouteChaos RouteLaw RouteDancing – How to Max Out Audience Size, Hype and […]