This guide will show you what each Stat and Skill does, along with the math behind them.

Stats show your general combat effectiveness due to your Skills or other Buffs you currently have active. 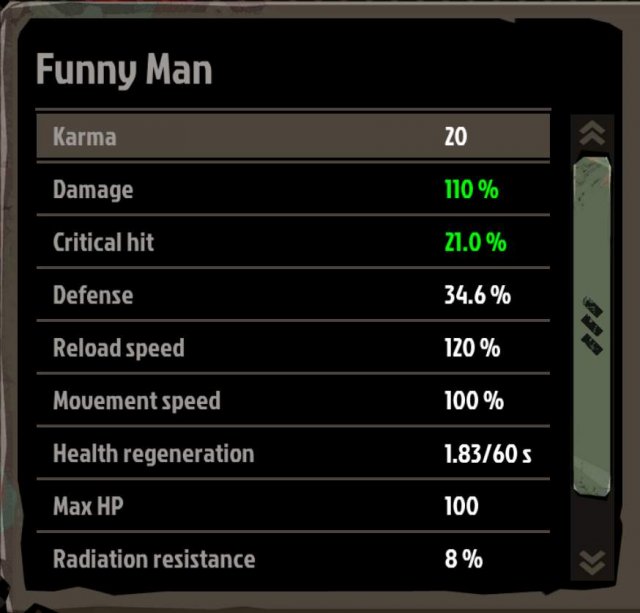 Anything highlighted in green is being boosted by an item or buff effect.

When selecting different stats the game will show you a short description, along with the math used to determine each one.

This is the only non-combat stat, it affects random encounters and some dialogue options.

It can be raised or lowered by dialogue options or certain choices and events.

It is a good idea to keep this high, as some random encounters can be very helpful.

This stat shows your overall damage multiplier due to buffs or item effects.

It does not show bonuses from your weapon skills.

The chance of any attack Critically Striking for double damage (Headshots can Crit for a total of 6x damage).

Shows how much an attack will be reduced when you receive damage.

Increased with the Defense skill, armor, or Perks.

The speed multiplier of all weapon reloads.

Increased with Perks and Buffs.

The speed multiplier of your basic movement.

Can be increased temporarily with Buffs.

The speed at which you naturally regenerate health.

Increased by the Curing skill and Perks.

The maximum amount of HP you can have.

Increased by the Health skill.

The Skills that Pay the Bills

Your Skills are passive abilities that can be increased when leveling up to grant bonuses for many aspects of gameplay. 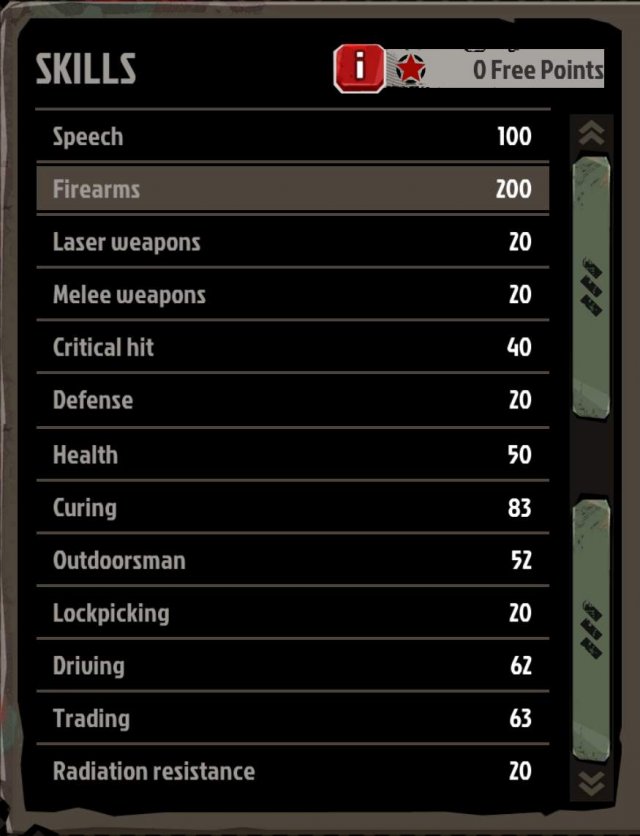 Skills can be increased up to 200.

The amount of Skill Points gained per level is determined by what Perks you have.

When selected, each Skill will give a short description and show the math used to determine their effectiveness.

Each Skill will start at 20 by default.

This Skill shows how good you are at convincing people to help you out.

There is no math involved on this one, just a point requirement that depends on dialogue.

Sometimes when talking to someone a skillcheck speech option will appear that allows you to either gain some free supplies or skip certain tasks if your Speech skill is high enough.

Not a very high-priority skill, occasionally allows you to get some free stuff.

This Skill increases how much damage you do with Guns.

Very useful, max this Skill first to save on ammo and kill stuff quicker.

This Skill increases how much damage you do with Laser weaponry and alien tech.

Useful if you get your hands on a Laser weapon and have plenty of ammo for it.

This Skill increases how much damage you do with Melee weapons.

This Skill increases your chance to inflict a Critical Hit.

Each Point increases your Crit Chance by 0.15%.

Very good skill to increase your damage output after Firearms Skill has been maxed out.

This Skill increases the defense stat of worn armor.

Each Point increases an armor’s defense by 1%.

Low-priority Skill, as you shouldn’t plan on getting hit much unless you cant kite zombies well.

This Skill increases your Max HP.

Each Point increases your Max HP by 1.

Good Skill, it’s good to have at least 100 HP to not get 1-shotted by bandits.

This Skill increases your healing item effectiveness and health regeneration.

Each Point increases healing effectiveness by 1% and health regen by 0.01 every 60 seconds.

Medium-Value Skill, you will be using plenty of bandages later in the game.

This Skill increases your chances of avoiding a Random Encounter.

Escape chance is set by the Random Encounter itself, your Vehicle and Outdoorsman Skill will be added together to determine your chances.

Low-Priority Skill, if you have high Karma you wont see ambushes very often.

This Skill reduces the speed of the Lockpicking minigame.

Each Point decreases the speed by 0.4%.

Depends on your skill, if you find yourself running out of lockpicks you might want to increase this.

This Skill reduces how much Gas is needed to travel.

Each Point decreases Gas consumption by 0.3%

If you have the Ultimate PC Edition this Skill is useless, if not it might be worth dumping some points into.

This Skill reduces the cost of buying items from Traders.

If you have the Ultimate PC Edition you can infinitely grind quests making this skill almost pointless, but lower prices are still pretty nice.

This Skill reduces the damage of all Radiation effects.

Each Point decreases Radiation damage by 0.4%.

Not very useful, Radiation does low damage and you can simply heal through it with bandages.

A detailed guide on how to perform a field vasectomy on the 2nd Boss of Springfield, Rocket. The Secret Strat Minor spoilers for the story in Springfield. This advanced guide […]