This guide rolls back the veil of mystery and despair surrounding tourism and reveals how to make gobs of money with pure tourism.

How to Get Filthy Rich with Tourism

This a guide to making money with straight tourism, no exports. Whether tourism is more or less profitable than an export industry is not the subject of this guide.

While the game makes a big deal about the Tourist Type (Relaxation, Backpacking, Cultural etc) you don’t need to pay the slightest iota of attention to it, since tourists of any kind will utilize services of any kind.

Unlike Tourist Type, you absolutely must pay rapt attention to the Wealth of tourists because it is incredibly rigid.

I would strongly recommend catering to only a single wealth level, either Well-off or Rich. While Rich tourists are more flexible in what they’ll utilize, services for Well-off tourists are wasted on them because it’s not like they pay extra and they’ll generally be unhappy with their experience.

The profitability of tourism is incredibly sensitive to travel time. This is because on Tropico when a tourist wants to visit a building, they pre-book a slot at the moment they decide to visit. That means the slot is locked while the tourist travels across the map. That slot isn’t making you any money during that time. As such you want to make a tight blob of Hotels and Attractions so that travel distances are very short. You can also use busses to try and speed up travel times.

A big chunk of your revenue will come from “Rents”. So then, we want to know how to maximize that profit. Basically, the amount tourists pay to stay at an Accommodation is fixed by type and independent of housing quality. You can electrify your hotel and set the budget to max but the tourists won’t pay a dime extra to stay there and the hotel will be much less profitable (don’t upgrade if you care about profits!).

Housing Quality does affect the tourist ratings, but as long as your hotels are generally full there is no need to invest into upgrades or higher budgets and you might even consider lowering the budget.

You should tick the “Tourists only” box. This prevent idiot tropicans from claiming a visitor slot and displays the tourist fee (I think the tourist fee is charged to tourists whether or not the tickbox is ticked, but it’s nice to see what tourists are paying).

To maximize the profit from an attraction we want to maximize the Service Quality. Generally an attraction will generate maximum money if set to maximum budget, amusingly that also increases the tourist happiness because tourists freaking love getting fleeced. You can also get any upgrades and choose work modes that increase service quality and fee. Of course more visitor slots are also useful by allowing more tourists to come and get fleeced.

I’m going to do a Cold War Walkthrough, that will rapidly accumulate a Scrooge McDuck money pile using Tourism as the prime money maker.

If you want to play along using the same map then these are the map settings: 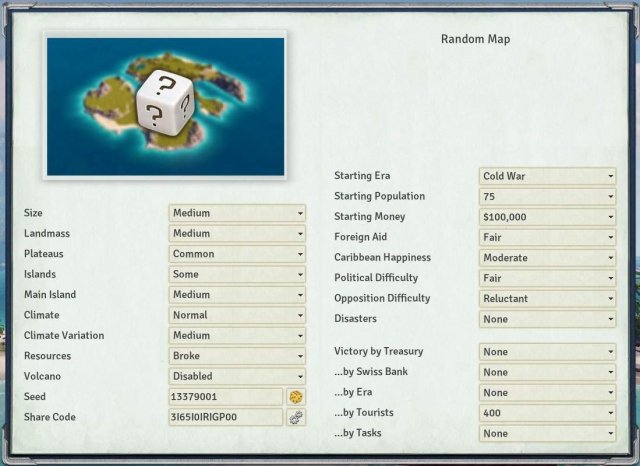 Of course this will work for pretty much any map settings within reason.

I’m using the El Presidente Customization Trait of “Savant”, this awards 1 Raid Point and 1 Knowledge Point per day and streamlines things a little.

It doesn’t terribly matter much what Constitution you enact. But I go with everything which favors Liberty and Environmentalism.

Set research to Good Old Days (enact it once it finishes), and immediately enact “Food for the People” and “Happy Meat”. 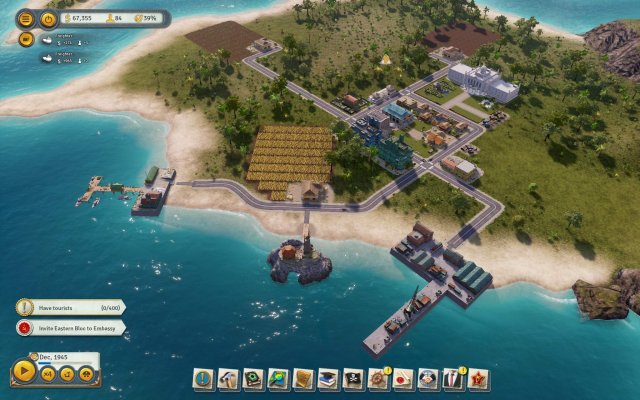 I start out by building up Civic Town a bit. The very first thing I build is a Pirate Cove, which is set to “On a Dead Man’s Chest” and tasked with stealing a Wonder: I go with the Brandenburg Gate but it doesn’t terribly matter which you choose (if progress is disrupted, just pay cash or wait). Once this heist completes I recommend using the pirates to kidnap workers.

I make some Tenements, a Tavern, a Clinic and a Chapel. I also make a bunch of food production buildings (Corn, Banana, Pineapple and Fish), I reduce their budget to 2 stacks of cash to make them less attractive than the tourist buildings. I also reduce the budget for the Port and Teamster’s Office because we hardly need them.

With the civilian population adequately cared for it’s time to build Tourist Town.

The centerpiece for Tourist Town will be an Ancient Ruins because it’s a good cheap money-spinner. There are two ruins on this map, I go with the one on the other island because there’s more room to build. 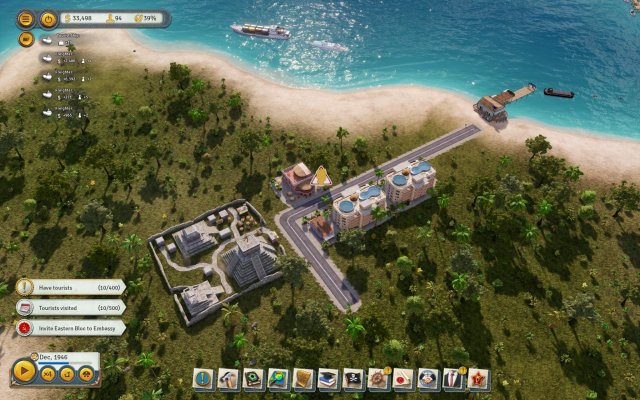 The Tour Office Tour Destination is set to an area of trees with no buildings: 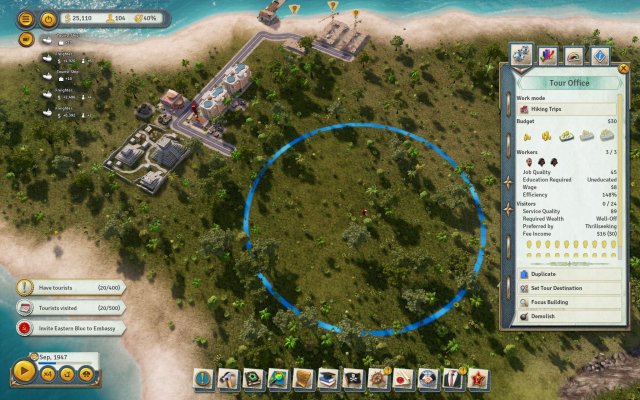 I build a couple more Hotels and the tourists start flooding in: 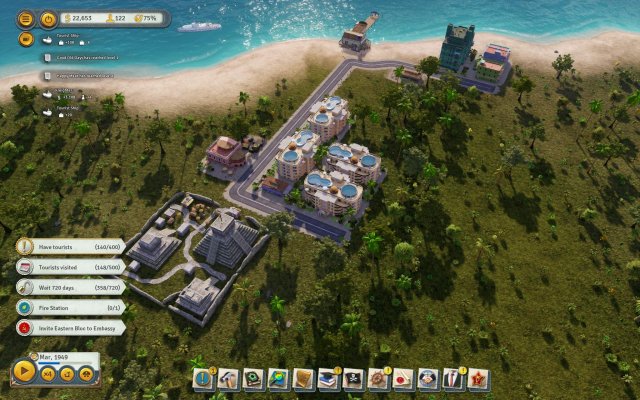 Five years into the game and Tourist Town is turning a very tidy profit of around 20,000 per year: 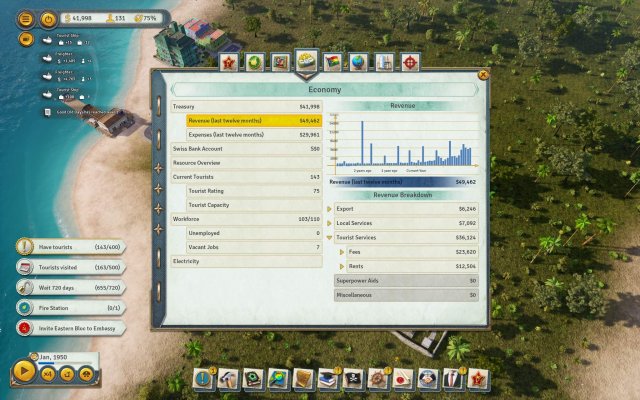 Seven years into the game and I’ve recouped the initial investment, with over $100,000 in the bank: 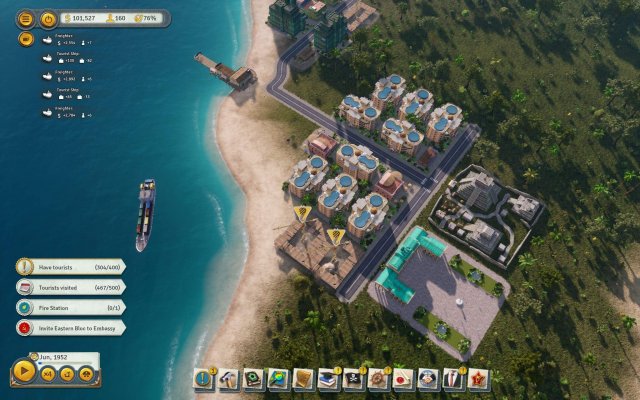 After a couple of setbacks my Pirates had returned with Brandenburg Gate and I built it next to the Ancient Ruins to minimize walking time.

Also Tourist Town has accumulated more Hotels and a second Restaurant. At the top of the screen we can see the small residential area for the employees to live: tourist buildings do not require workers to actually attend work in order to function, so we don’t need to care how long it takes them to get to work, it’s just to stop them building shacks in Tourist Town.

Also in the seventh year I advanced into Modern Times by fulfilling the tourists requirement. 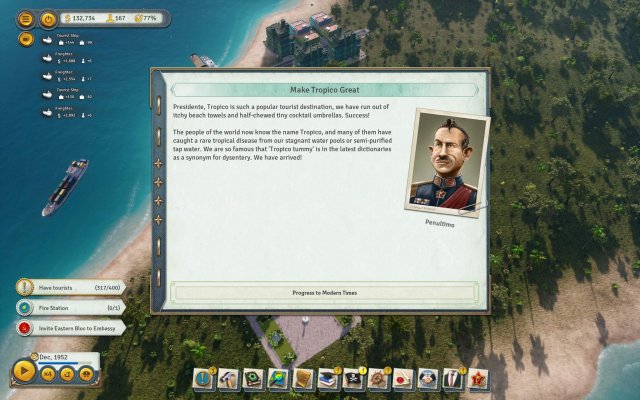 I’m not actually going to modernize though, there is precious little benefit to providing electricity and stuff. 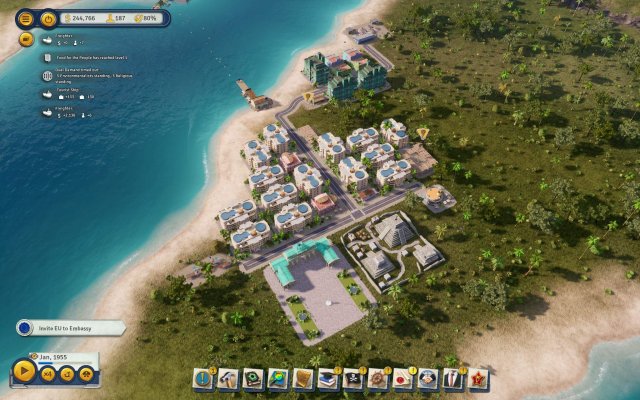 Tourist Town has grown with more hotels and more attractions, like Hang Gliding and a Cocktail Bar (note: everything I’ve built uses only uneducated workers and requires no electricity).

At this point I’ve won the game according to the victory condition I set (400 tourists) and just won the election with a landslide of approval.

The yearly income is over $100,000 with 90% of that coming from tourism (the yearly expenses are less than $30,000 not including construction and blueprints). 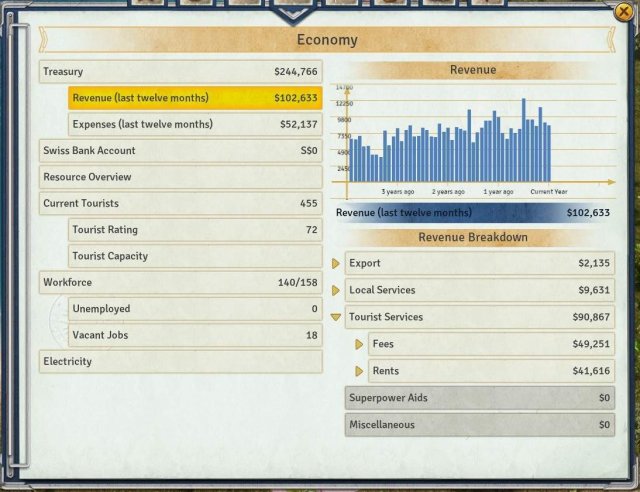 Of that income slightly more than half is from the attractions and entertainment, with the rest from the hotels. 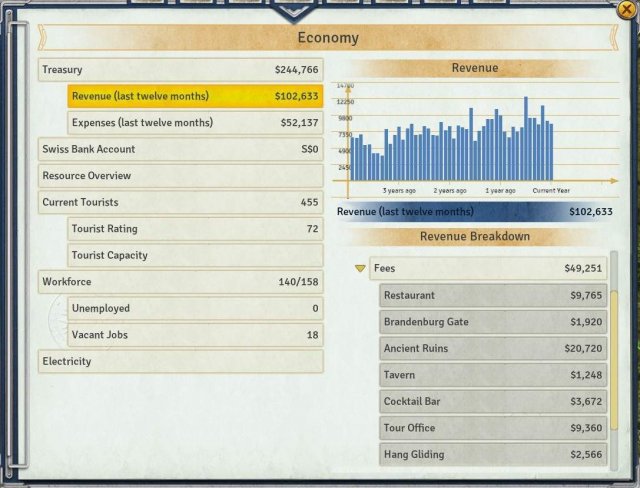 The next most profitable is the Tour Office which pays for itself 3 times per year.

Then come the two restaurants (individually they make only 5000 each) which pay for themselves twice per year.

The Brandenburg Gate is not a big money spinner, but it does draw tourists.

Also the Hotels take roughly 2 years to pay back their cost. They are profitable but serve mainly to allow tourists to visit the big-ticket attractions.

I hope this Walkthrough has been educational regarding the profit potential of Tourism.

Tourism may or may not be more profitable than exports (I think it probably is, at least at small scales). But one thing for certain, is that when done well it’s a very stress-free way of earning very good profits. There is no logistics, no teamsters, no traffic and no irregular paydays, just a blob of hotels and attractions churning out money 24/7 until the end of time.

In this walkthrough I’ve only explored a fraction of the potential of Tourism, since I focused exclusively on Well-off tourists and services using uneducated workers, requiring no electricity and mostly those from the Cold Wars. This approach probably does offer the best returns on investment and profit margins, but if you follow this approach you’ll have no shortage of cash to experiment with other tourist wealth levels.

Step by Step Guide Shacks popping up everywhere? Despite your best efforts, you can’t get rid of every single one and you’re sick of shacks between beach villas ruining your […]

I have not much to offer but some conditions could be vague and confusing for some players so I made some simple guide for it. Hope this helps. I’ll omit […]