Colony dying because of starvation, thirst, radiation? Here some guide to improve it.

Many people, including me previously, believe this game is imbalance and too challenged. That’s actually not true, the real issue is on the overdevelopment & under-accumulation of resources.

To better show what i am trying to say, take a looks of screenshot of 2 playthrough with different approach below, both at Season 73: 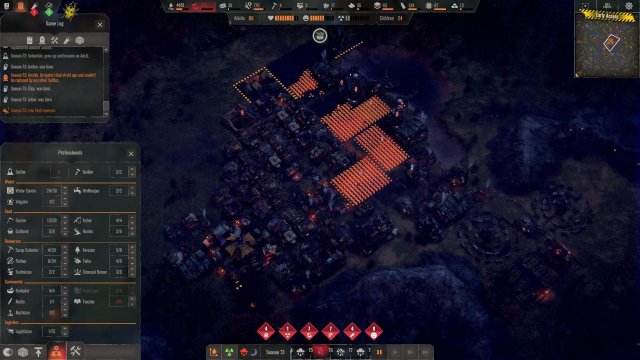 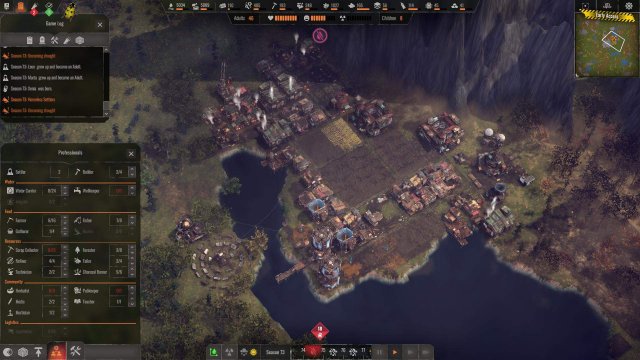 For first case, the town was doomed 10 seasons later due to starvation & over radiation, despite i have a lot of farms, hunter lodges, gatherer huts & fisherman hut.

For second case, my town was much smaller with only half population, but my food reserve is 20 times, tools 50x, clothing 80x. This town continue to survive for another 63 seasons without big issue & now about the same size with playthrough 1.

The key differences between these 2 playthrough are i waited very patiently in this play. I didn’t spam house to address homeless issue, everytimes i have food & water surplus season i let it keep accumulating, until i have 5000 of food before i add another house every 5-10 seasons. I did the same for my tools & clothing, actually most of those tools & clothing are made with only 1 production building each.

I do have old citizen occupying houses and sometimes empty houses without occupants that made my population drop after some times, but normally after another 2-3 seasons (when old folks died off) new couple will move in and having offspring. However, that can be address by turn off building that have big surplus (herb, tools, clothing & etc) that have enough reserve to last through the cycle. Things start to get better after having around 8-10 houses and 3-4 cycles as the ratio of young to old citizens getting stabilise.

Play it patiently, you can beat the game.

Ok, not the irrigation bug, that really irritated me.

Some guide for those struggled by radiation & drought:

Start by building 1-2 farms with Bell Pepper, that give you constant & fast food turnover. At the same times, build a large Orchard, it will take a few seasons to grow, but once it’s matured it will provide you with a lot of fruits every season (oh ya, trees don’t wither during drought!).

Build it as soon as possible, as it allow you to auto-cover your farm & rainwater catcher during radiation rain.

Herbs is very fast to gather in this game, but make sure you rush to build Medical Centre if people are sicked, only medicine cure them. I build 2 MC to ensure constant stocks of medicine, this prevent disease from spreading before you produce enough medicine.

Forester always chop trees first before replanting it, so it’s good to have second lodge to focus on replanting from time to time.

One of the midgame issue is nearest scrap piles are far away. you can help by building road to reduce travel times.

From the in-game description, a market is a place where food, water, essentials, etc are collected from warehouses, town centre, water tank, etc. But that is not all. What Is […]

A brief guide to make the “Shut up and take my money!” achievement a bit easier, and help people understand the mechanics. How to Obtain Shut Up and Take My […]

A guide to the basics of Endzone – A World Apart. Common Mistakes In the beginning build up to ten houses! You don’t have to house all you settlers, if […]