This guide will cover all your wizards needs.

I’m currently rushing through star system 14 as I’m writing this and thought I might give some tips for those starting out with Wizard, assuming you didn’t transcend yet and only did a few ascensions or none at all. But it also will contain some strategies, which might be helpful for veteran players, too.

Before we start: Don’t worry about choosing the wrong nodes and thinking you need to start a new Wizard. Wizard is way more forgiving than Cid regarding that, technically there is no wrong element and thus you can’t screw up (except you really want to). You can even out “mistakes” with each ascension pretty easily. But more on that later on.

Most people probably played Cid before and wonder how different Wizard is compared. The only thing they do share is that you can still buy equipment, upgrade it and get items from the shop. Also do both have the Level Graph where they can spend points after each level to learn stuff.

Everything else, except the core gameplay of traversing worlds and star systems, is pretty much different. For the Wizard each Star System has 50 worlds, while Cid has 30.

Cid uses an Automator, which needs to be learned and enhanced through the Level Graph. While the Wizard has a Runecorder, which records all the inputs you do and replay those to your likings. More on the Runecorder later on.

Overall you will spend less or nearly no time at all upgrading things for the Wizard (except in the early game), as most of his gold will be converted to damage through Transmutation (passive effect which enables itself while playing your recordings). You still need to buy new equipment to increase your damage, but that is something you want to automate, too.

The Wizard and his spells can be intimidating at first, but I will explain most of the Wizards’ features from now on to make the start as easy as possible. If you are curious about a specific topic, use the navigation to the right.

To make my life a bit easier and more understandable for you, I gonna use abbreviations and explain the most common terms here.

The Wizard has three elements to his disposal: Lightning, Fire and Ice. Each element has a direction on the Level Graph as can be seen here: 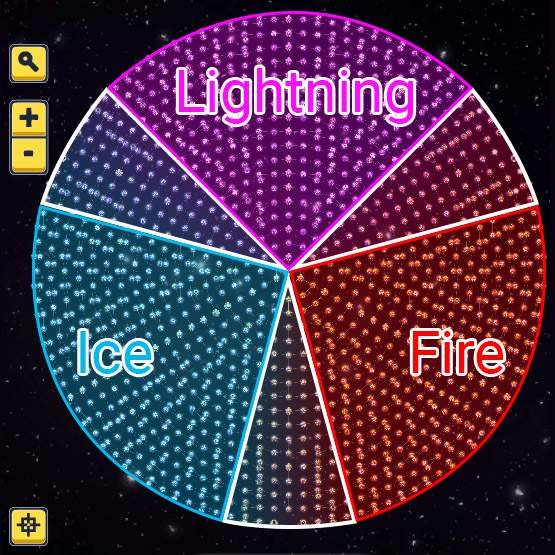 In the center at the start you will have 4 basic nodes which you only need to unlock once and then never again:

The white areas between the elements are Combining-Nodes, which will boost effects/stats for both elements connecting: 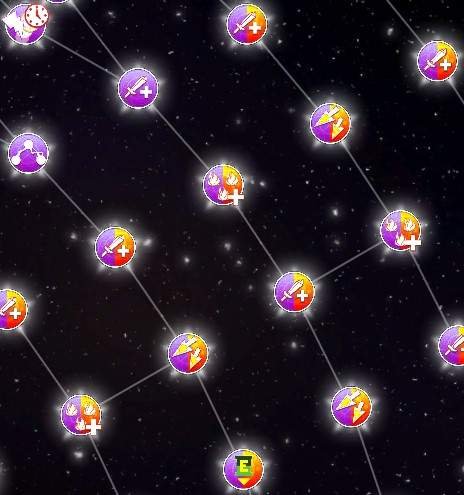 This feature is your bread and butter for optimized gameplay be it active or idle. 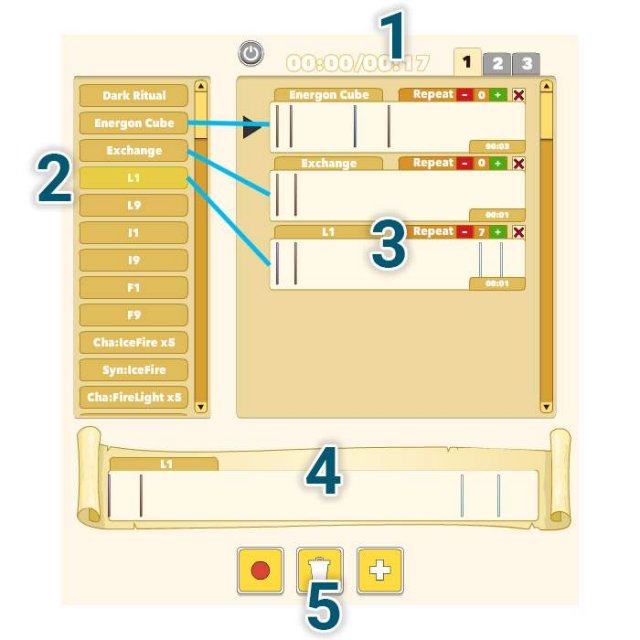 From Left to right: Power on/off to run your Runecorder, the current and needed time for your rotation and lastly your Runecorder sets you can switch between.

Each item is a Recording which you can name in whatever way you want.

When dragging a Recording into your rotation you can see them stacked under each other, they will run in that order. You see a small number which allows you to repeat a certain spell several times if you want to, before going to the next. In this example the rotation would be:

After that it would repeat from the beginning.

When recording a new spell or looking at one already created you can see details of the recording here. Each pin color represents a rune you used and the light blue ones are for clicks. Yes, you can record clicks, too. The further to the right a pin is, the less time you needed to stop the recording and thus more efficient. In the picture above you can see the pins of Exchange left and a lot space to the right, that is because I pressed the runes super fast, but the spell still needs it’s one second cast time. So don’t stop the recording after pressing the runes, but wait until the cast is actually done.

Pretty self explaining, you can delete, remove or add a recording here. If you want to re-record an existing recording then select it and press the record button again. It will update every set, where the spell is used, too.

The game doesn’t tell you much about how some of this recording behaviour works, so let me enlighten you with a few tips:

Each element has a basic signature:

Nodes of each element

Talking about stacking, everything above 100% will get you additional tries which is often described in the Node. “Chain” for example will add more monsters to hit after every 100%.

Ice Buff (Triggered by any Lightning or Fire spell):

Lightning Buff (Triggered by any Ice or Fire spell):

Fire Buff (Triggered by any Lightning or Ice spell):

While learning Combining-Nodes you will notice Synergy spells or buffs which can be learned.

There are 3 types of Synergy nodes:

Each of these need their own kind of charge, which is always noted in the spell info. To cast the Lightning-Fire Synergy Buff you need 5 of its charges. In this case is one charge a Lightning, Fire and then Lightning Spell in that order. You can shorten the charge gathering up, instead of:

It only matters that they alternate between each other. Also while not being noted in the spell description, they do add additional Fatigue stacks when applied, so keep that in mind with your energy management.

Generally speaking are all Synergy damage spells wasted Mana, that includes especially the special types. The only real good stuff are the buffs, but more on that on strategies further below.

ContentsGenerallyRule #1Rule #2Rule #3HintsExample for an AFK-Automation Build Generally Automator works like a priolist. 1st come, 1st gets. You have to follow some rules. Do not follow em and you […]