A guide about how to oppress your vassals and stop being a simp.

Every vassal has a secred boldness rating that is based on their traits. If you have 45 more dread than their boldness, they will be terrified. 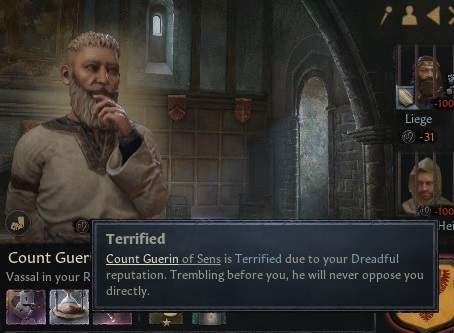 Many traits affect boldness but the one you should keep on mind is “Brave”. Brave trait gives a massive boost to boldness and such characters will never ever be terrified of you. If you have a brave vassal execute them immediately. They probably won’t accept imprisonment so use assassins.

Conversely, “Craven” trait gives a big minus to the boldness. Such characters will almost always be terrified of you, even if you have zero dread since their boldness is in the minus. They will also be easily arrested.

Clan Government Is Not Compatible with Stalinism

Feudal vassals give levy and tax based on their obligations. Its only obligations that matter, so you can just dump them into medieval gulag and be done with it. If they are terrified, you can leave them outside, they still won’t do anything.

Tribals give levy and tax based on your level of fame. As with feudals you can do whatever you want as long as your fame is high. If you’re playing tribal make sure to do a lot of battles, they give massive fame. I attack a powerful country like HRE and farm fame by battles.

Clan vassals give levy and tax based on their opinion of you. Since you’re keeping them in a constant state of fear and tyranny they won’t give you anything, even if they can’t rebel to you directly. Crown authority forces them a minimum amount of levies and vassals but its too little.

So while you can keep them in line by dread, you will be very weak. Don’t use the hard rule tactics with clan governments. Those play a lot closer to CK2, keep your vassals happy and all that simp ♥♥♥.

There is a catch. Doing bad stuff to prisoners of your own religion will lose you 100 piety. Piety is hard to come by and you need it for your holy wars. How do you fix this problem?

Simple, get the second perk of the left side of torturer tree from intrigue lifestyle. Its called “Divine Retribution” and it prevents the piety loss from executing and torturing. After this, torture to your heart’s desire!

I Can’t Imprison Anybody!

Yes, its all fun once you get the snowball going but it might be hard to do so. How do you start your rule of fear if everyone is just looking for a reason to rebel anyway?

You need to play your vassals against one another until only you are left. Get the third perk from the left side of schemer tree. 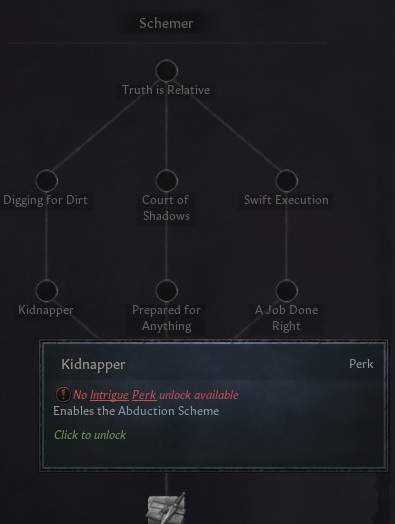 This perk allows you to kidnap people (duh). Simply kidnap your strongest vassals and have them in house arrest. They will be forced to stay loyal to you. Then try to imprison the lesser vassals. If they will revolt, use your jailed vassals levies to crush them. Then torture and execute a few and enjoy your stable realm.

To kidnap people your character needs to be skilled in intrigue. And the kidnappee needs to be low in it. Otherwise your kidnap chance will be very low.

Don’t worry though, there is another way to force their loyalty. You will need to form an alliance. In the middle ages alliances were formed by marriage. Simply marry one of your close relatives to one of theirs and the alliance will be formed. As long as alliance stands that vassal won’t join factions. This is a temporary remedy though, your allies can still revolt against you after a failed imprisonment, they just can’t join factions. Ally a few of your powerful vassals if you need to buy more time.

If your character sucks at intrigue, you will need outside help. Form an alliance with a strong third country. Make sure they are at peace, then instigate your civil war by trying to arrest one of your vassals. Call your allies to war. That will tip the odds in your favor to win the war. Every rebel will be arrested and you will be free to do as you wish.

This is usually faster than kidnapping but waiting for your ally to finish their own wars can take some time. If you don’t wait they might focus on their other wars and leave you to your fate, even if they join your wars. So don’t start the civil war while your ally is busy!

I will explain how to start your rule with Philippe, but you can do this with any feudal or tribal realm. This is a good example, as Philippe is a weak king surrounded by robber barons.

Zoom in your map and take a good look at your vassals borders. Check out who has the most levies. Its the duke of Aquitaine and the duke of Champagne. Break your bethrodal and marry the daughter of Duke Aquiatine. This should buy me enough time to make my move. I couldn’t form an alliance with Champagne but Aquiatine is quite large and should be enough to prevent others from rebelling.

Philippe will probably suck at intrigue (I had 4) so you will need to do this through a civil war. In my game William the Bastard Conqueror had conquered England but was in trouble against Norway. I married my brother with his daughter and helped him win the war. Next he got involed in some iberian wars, so I waited until he was at peace.

I attempted to imprison the duke of champagne. It was a 0% chance but I’m trying to start a civil war anyway. He declared and about half the country seceded with him. Not more because I had gotten an event that gave me a little bit of dread, and the duke of flanders was terrified. I called William, he crossed the channel with 5k troops and we crushed the traitors in a two year war.

After the war I easily arrested now terrified duke of toulouse and only one strong vassal remained, Duke of Aquiatine and my ally through my sister. I imprisoned my sister and beheaded her, then attempted to arrest the duke. He rebelled. William and I crushed him but I could probably done it without him, most of the vassals were loyal at this point. I imprisoned his heir too.

With that final revolt the realm was in my absolute control. I could now look towards other realms and aggressively expand like any medieval ruler should. I was able to do all this by 1078 but you can probably do it faster. Willy took his time in Iberia and I had to wait.

Things You Can do Afterwards

Now that you wrestled power from your vassals, here are some of the things you can do:

This tip is important:

Now that everyone is terrified of you, they will never oppose you directly. However, they can still plot your death. In fact, they probably are doing it right now! They want to kill you and make Trotsky the new king. If you survive an assasination attempt or something, do what is written below immediately!

To prevent your death and put these traitors where they belong, you must imprison them all. Once imprisoned, they can’t plot your death and you will be safe. First, get the “prison-feudal complex” perk I mentioned above. With it, you can arrest everyone at usually 100% chance. Now you can start arresting the traitors.

But how will you know which vassal is a plotter and which one is loyal? Very simple, just follow the guideline below:

The purge should take one or two years. Once you think you are safe enough, imprison more just to be sure. Then you are probably secure, as people in gulag can’t plot. You can hang the axe and rest easy.

Important Note: You probably also obliterated your best generals. Invite new ones from abroad and give them counties. You need good generals to win wars.

You are in absolute control of your realm now! You can do as you want and make your country great again!

In this guide I describe to you how to obtain the achievement “Going Places” in Ironman-Mode. How to Obtain Going Places Achievement How to Get Your Kingdom For this achievement, […]

Crusader Kings III – Guide to the Mother of us All Achievement

This a comprehensive guide for one for the hard achievements installed with the vanilla version of CKIII, “Mother of Us All”. This achievement requires the player to start as one […]