This is a guide about how I escape predators. Obvious spoilers.

Most likely the first lizard you’ll see. Greens are extremly easy to avoid. Climb up a pole to easily get over and past them. 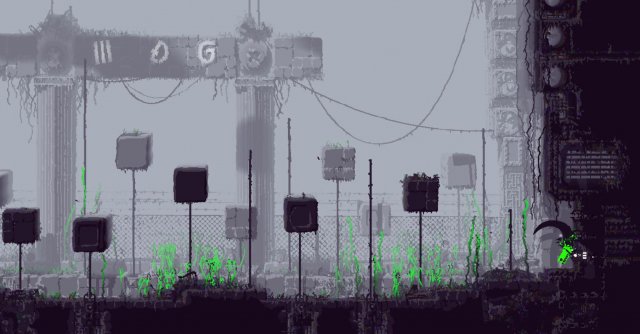 Avoiding pink lizards might be a bit harder than avoiding green lizards, for pinks can climb poles. But you have the abilty to leap so leaping and even simple jumping can help you escape pink lizards.

Once you get to Industrial Complex, the blue lizard will most likely be the first lizard you see. Blue lizards easy to avoid, despite the fact that they have a sticky tounge and can climb the background. Their tounge is short, so they’ll be running towards you slightly slowly. Blues are also the easiest to kill. One spear can easily injure the blue lizard so that it will most likely be caught in the rain. Another spear will kill it. I usually spear blue lizards who are annoying me, but if your caught with a blue without a spear then throw rocks at the lizard constantly, for the rocks knock it down from the background and stun the lizard.

White lizards are like blues, but stronger. They’re faster, have a much longer tounge, and use camoflage. I belive they can take 3 or 2 spear hits to kill, but for white lizards, I recommend throwing rocks at it constantly and running away.

Salamanders are the only lizard I found in Shoreline and they sometimes appear in Drainage System. Salamanders are aquatic lizards, mostly waiting at the bottom of the water and looking like debris. Getting caught by salamanders on land is safer then in the water, for salamanders are fast swimmers. If your caught by one in open water, swim to land. Something I usually do is to go underwater, press the jump button, go to the surface, and do all the steps again. This stragety is helpful if your being chased by anything in open water. Remember to stop doing this stragety when your slugcat’s eyes are closed when you emerge. 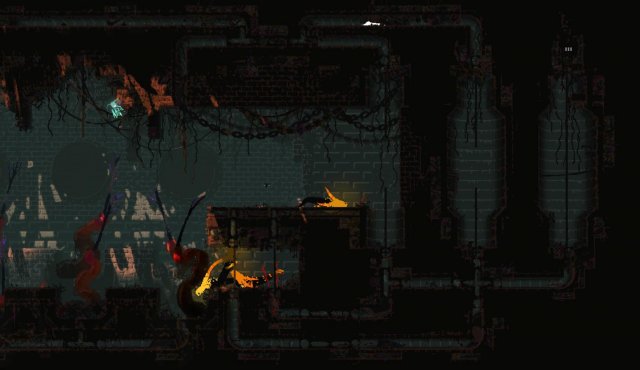 Black lizards are lizards that only live in extremly dark regions, such as Shaded Citadel and Subterranean. The dark areas they live in are usually tunnels or simply small spaces. Black lizards are blind and only navigate through hearing and feeling around. Due to this it is easy to trick the lizards to go away from you.

The fastest, rarest, and strongest lizard. Reds can easily outrun your slugcat. They can also climb poles and can spit at you to slow you down or knock you off poles. They’re the hardest to klil, which I’ve never personally tried doing. Red lizards only spawn if you kill lizards a lot, and it takes lots of time to do so. I recommend trying to not spawn in a have much because I befriended the only red lizard I had spawn. Catapulting it with rocks might work if your caught in open land, but that’s all I’ve got. Remember that if your bitten once by a red, your dead no matter what. 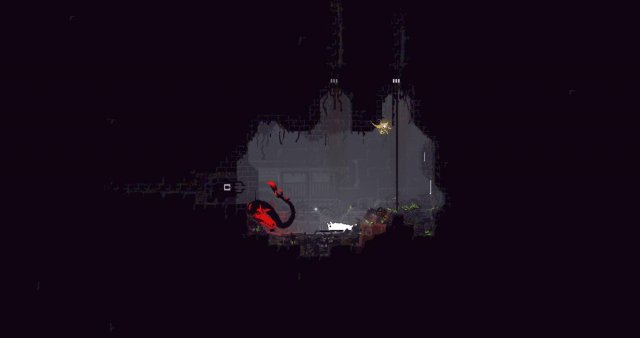 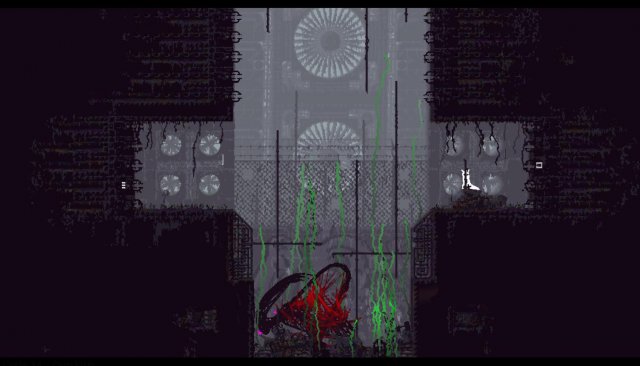 Vultures are the only predator that can fly, and the only predator lizards fear. (Sometimes lizards are scared of the slugcat) Vultures will spawn in by decending from the sky, which you can see by a vulture shadow in the background. Vultures luckily only spawn in rooms that are exposed to the sky, and are large so they can’t get you if your deep in a tunnel. They do, however, have a long neck that can pluck your slugcat out of tunnels. Vultures are hard to kill, though I usually use a explosive spear on their body and then spear them as much as I can. The sound of threat music starting and a vulture shadow is a sign that a vulture is appearing, so get to safety as quick as you can. Vultures also can’t travel through tunnels. 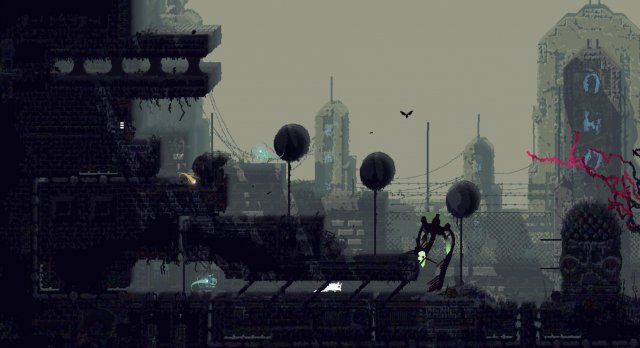 Scavangers don’t attack you to eat you like the other predators on this list, but attack you as self defence. To get past scavangers safely, I recommend dropping any spears or bombs you have (By pressing the down and pick up button at the same time) and crawling past them. Doing this at scavanger tolls doesn’t work unless you’ve given them a pearl and the threat music stops or is very quiet. Scavangers also have a low chance of attacking you if you’ve gotten The Cheiftain acheivement. 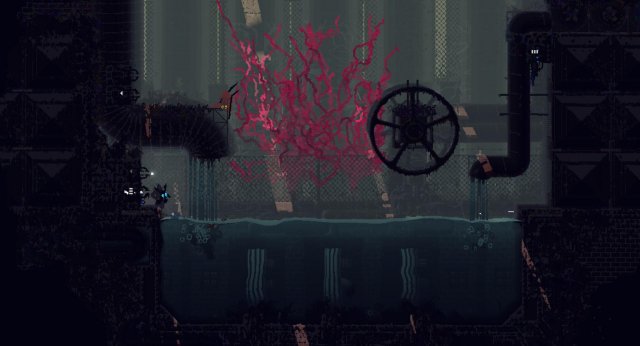 I decided to put these two in the same section due to the fact that the only difference is that Daddy Long Legs are more larger and stronger. I spent a good amount of Rain World running away from these two predators. Both daddy and brother long legs are blind so hitting a wall with a rock can easily distract them. Also note that daddy long legs will only send out one tentecle to feel where they heard something, while brother long legs will go there itself.

The leviathan is a rare yet dangerous predator that only spawns in the Shoreline’s deep water. It is unkillable as far as I know but I find it easy to avoid. Getting onto land will stop it from getting to you and while swimming towards land, you could use the stragety I used for getting away from salamanders. If a leviathan gets near you, it’ll open its mouth to eat out. It is possible to escape its mouth if your fast enough.

These spiders only spawn in the Shaded Citadel, so I’ve given them the name of citadel spiders. The citadel spiders usually go around in groups to hunt. Alone, the spiders are afriad of your slugcat, but in groups they’re strong and attempt to kill your slugcat. It is possible to kill them, which is rather easy. Throwing simply rocks can take care of a group of citadel spiders quickly. The spiders are also afraid of light from scavanger lights and blue glowing bulb’s light when they’re thrown. The bulbs can be found in Memory Crypts, and in some areas of Shaded Citadel.

These creatures will most likely be a challange at first, but will soon be easy to go right past. They only sense things by movement, so move slowly to go past them. I’ve never tried killing one before, but if you throw a spear at one, it will be temporarily stunned, allowing you a moment to race by.

I’ve only found these birds in Memory Crypts, but I’ve heard that they also spawn in the Subterranean. They are extremly fast and will easily outrun your slugcat. When they run, the feet of the miros birds makes a clicking sound that you can hear from far away. Hearing the clicking is a sign for you to run into a tunnel for miros birds are large like vultures but can still pluck you out with their long beaks. You can also climb up a pole to escape miros birds but only climb up a pole if the miros birds are already on your screen and there are no near tunnels.

Worm Grass is a predator that you could easily not see through your entire play through. They
sometimes appear in the highest regions of Subterranean and thrive in Farm Arrays. The ones in Subterranean are always in small, grey patches, and sometimes the ones in Farm Arrays are the same. To get past these patches, I usually run and jump right through them. If too many grab onto you, then you’ll slowly be brought to the center of the patch, and eaten. Some of the patches in Farm Arrays are huge and a red color. These ones can’t be jumped through and you’ll need ato ride a reindeer to get past them. 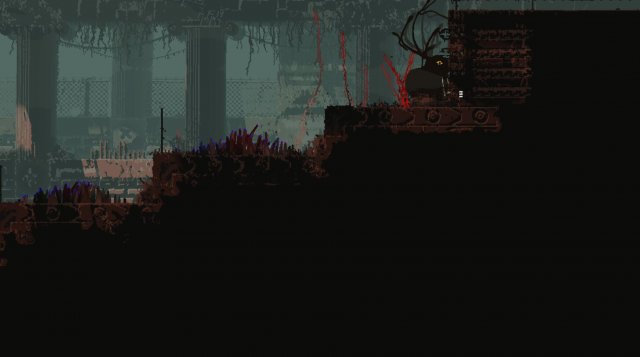 Rain World – Tips and Tricks for Getting Started

Before you Play the Rain World game, you will definitely want to know these simple but useful tips and tricks. If you have any tips feel free to share with […]

Rain World is a deeply difficult game, both in terms of mechanic and in how willing it is to make itself explained. Here’s a few tips to make your first […]