A short guide of all the weapon types and their proficiency bonuses in Empire of Sin.

Types of Weapon and Bonuses Overview

This guide will provide a full list of all the different weapons and proficiency bonuses that you can gain from your gangsters’ in the game. This guide is just here if you do not want to remember everything off the top of your head or you are just curious about what bonuses each weapon type provides and how they work. It is by no means comprehensive.

The game already explains most of the bonuses quite clearly but I will give a brief explanation of what each bonus does anyways, especially for the more confusing or vague ones.

I won’t explain how combat works as there is an in-game tutorial that explains it anyways, and that is also not the purpose of this guide. If you’ve ever played any XCOM games then you’ll also be familiar with this game’s combat system.

You have probably learned most of these with the game’s tutorial or from experimenting yourself, but I’ll still reiterate them nonetheless.

First let’s go over the list of weapons within the game. There are 7 types of weapons in total that you can earn proficiency bonuses from, which are:

The more you use a weapon, the more proficient your gangsters will be at operating that weapon. Certain types of gangsters can only equip certain weapons. The game tells you what they can or cannot equip in their stats menu.

Each weapon has a different niche and are effective at different ranges, so be wise when choosing which weapon you want to use.

Consumable throwable items (e.g.: grenades, dynamite) do not count as weapons, and thus do not benefit from this system.

To gain proficiency, you will have to kill a certain number of other characters, be it thugs, the police or any other hired gangsters. Each time you hit the threshold, you will “rank up” in that weapon’s proficiency and unlock a new bonus. You can increase that “rank” up to 5 times.

The requirement for each rank increase is at 10, 25, 50, 75 and 100 kills respectively. They are independently counted for each weapon, so if you want to level up say a pistol when you haven’t used it before, you will need to get 10 kills with it, regardless of how many kills you have made with other weapons.

Of course, proficiency is also separate for each individual character. 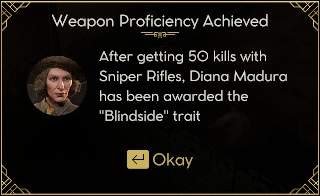 An example of meeting the requirement for 50 sniper kills.

Only the killing blow is counted, so you can use whatever you want to take down the target’s health, just make sure the final shot is from the weapon type you want to rank up.
Letting fights end by Bleed Outs does not increase the kill count.

A lot of bonuses increase this stat, so this needs to be explained.

Marksmanship is your accuracy stat in this game, and most of your gangsters have anywhere between 50 – 150 accuracy. This means even a +10 bonus can be useful. It also seems to influence your critical chance, although how much I cannot say.

Marksmanship from 150 and above will mostly guarantee your shots land regardless of cover or even range penalties, as it will increase your accuracy beyond 100%. The game doesn’t show it though, so you’ll have to check for yourself.

So… Make sure you have a good marksman for fights.

Pistols are one of the 2 types of secondary weapons of this game. It can be equipped by anyone regardless of class

The weapon itself has low damage and suffers from an accuracy penalty when aiming from medium range or further. However, it benefits from an accuracy boost when aimed at close range and has a low firing cost, meaning it can be used to save ammo for your main gun when picking off enemies who are close to you when they are at low health. 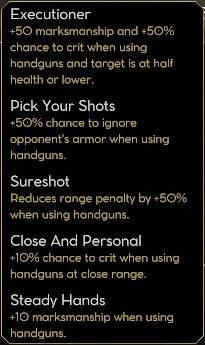 This just means your shots will be more accurate. Nothing important.

This is also a straightforward bonus. Remember, it’s close range or less. 10% isn’t a lot though.

This means you have less of a accuracy penalty when aiming longer distances. Such as a 20% penalty becoming a 10%, or 10% to 5%.

Armor reduces your damage dealt. This gives you a 50% of ignoring that reduction. You’re not going to use this as a main damage dealer anyways, so this isn’t as useful as you’d think, but it will help.

This bonus gives you a huge accuracy and critical chance boost when the opponent is at half health or lower. With this, you can reliably finish off someone, even at a far enough distance.

A good all rounder weapon, the SMG excels at cost efficient multi hit attacks. However, the weapon does incur minor accuracy penalties from equipping it. Its main attack is a 3-hit burst fire. 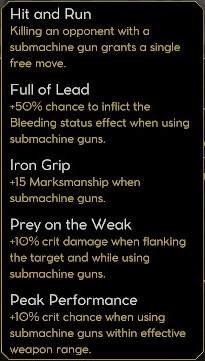 Within effective range means at medium range or closer. its around 7 tiles or less.

The critical damage bonus only applies to flanked enemies. This means shooting from where they’re exposed. This means the target is not in cover from where you’re aiming.

A chance to apply the bleed status debuff on hit. This just means they take 20 damage every turn if they are bleeding. It lasts for 2 turns if successful, I think.

Whenever you kill someone, you get 1 AP worth of movement for free. You can opt to skip it. If used with the “Kill Chain” skill, this means you can reposition yourself for free after every kill.

Machine guns are like submachine guns, but it fires a 5-hit burst instead of 3. The tradeoff is the extra AP cost. They also usually come with armor stripping properties. They get slight penalties when firing at longer ranges, and slight bonuses when at closer ranges. 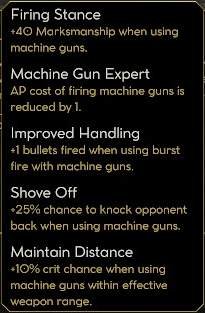 Like the SMG, extra critical chance when using it. Remember, it’s only effective when at medium range or lower.

This bonus makes it so that enemies can be moved from their positions when shot. Careful, this can work against you if you accidentally push them outside of your vision.

Now, instead of a 5-hit burst, you will fire a 6-hit burst. Yes, it consumes more ammo.

This is a beautiful bonus as you can now move before you shoot, instead of standing in place if you want to attack.

So, more accuracy. What’s not to like, especially with this big of a boost?

This weapon is unique in that it has 2 variants. The standard main weapon, and the short-barreled secondary weapon. It is primarily a crowd control weapon, but it is very limited by its effective range. Its accuracy takes a big dip once at medium for further range, but it gains a bonus when at around 3 or less tiles away.

This weapon type comes with its own unique action named ‘Shotgun Blast’, which fires at every enemy within its cone of range. 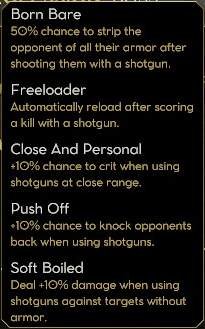 Most enemies don’t have any armor to begin with, so it’s a free damage boost.

Another knockback effect bonus, like the machine gun one, but with a lower chance.

You would want to be at close range when using this weapon anyways, but yes, more critical chance.

This. If you can suffer through the low accuracy of the weapon, or have enough marksmanship to make up for it, this will make it worth everything. Essentially you will never have to reload ever again if you can kill someone within 2 shots.

Well ain’t this convenient for bosses and tough guards? What else do you want me to say?

The cost of this attack depends on your distance form your target, so you have to consider your movement stat. The damage it deals is dependent on your equipped melee weapon. This is your last resort weapon, so you’ll more likely than not never rank up your proficiency on this either way.

There’s also the fact that you can’t position yourself since if you use 2 AP to get to an enemy the game just ends your turn anyways even if it let’s you to perform a melee attack for that same cost. So you’ll usually be wide open for counterattacks afterwards. 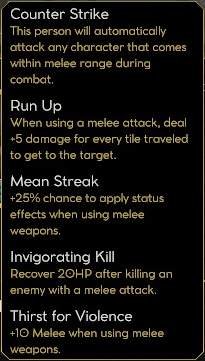 Yes, this attack’s damage depends entirely on your melee stat. Not your marksmanship. So, yeah. This is nice.

This a very straightforward bonus. Useful if you don’t have a doctor or healing items available.

Melee weapons usually come with status effects, so this is welcome. If you ever use them that is.

Not bad, not bad. Still, it will leave you open if you can’t finish the target.

Anyone that walks within 1-tile distance of you will be facing a counter attack. However, as of writing this, the skill itself is bugged and doesn’t work. It’s also only useful for street thugs if it does, since every guard has a gun.

One of the 2 long range weapons in the game, until you have high marksmanship, this is the usual choice for long range engagements. Even in late game when your boss has enough marksmanship to make up for it, if you’re firing from one end of the street to the other, a rifle or sniper rifle is still preferable.

This weapon suffers from a penalty at close range though. 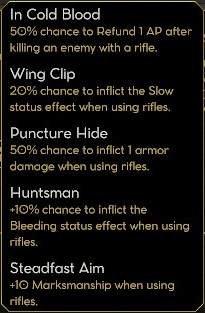 Well, bleeding targets are always good, yes? Although dead targets are better. Rifles have enough damage to cause the latter more.

Well, it’s better than nothing. I guess.

Like bleed, just less useful. I’d take dead enemies over enemies that take longer to get to me. But hey, if they stay out of their effective range, that’s good, just rare.

Normally, this is a useless skill due to its turn ending normal shot. However, when used with ‘Kill Chain’, it turns into a monster. You can potentially stack up to 4 AP (the game’s hard AP cap) if the game is nice to you, meaning you’d have more than enough to kill everything. The problem? This combo is only available to boss characters.

A weapon with a very long effective range and the ability to damage armor. It does however, have a high AP cost that forces you to stay still if you want to attack, and suffers from a heavy close range penalty. 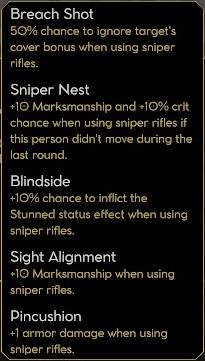 Well isn’t this just dandy. Seriously, this is nice.

Useful for making those that survive unable to do anything. Although the low chance and high base damage of this weapon makes this quite unlikely to happen.

Nice. Though you will have to stay still to receive this bonus. If you’re playing sniper, you’re not likely to move anyways.

This is important and useful. Cover bonus is a 30% accuracy penalty at full cover, and 15% for half. If you don’t have the marksmanship to back yourself up, this will.

Empire of Sin – Cheats (How to Enable the Dev Menu)

This guide will teach you how to enable and use the developer menu. This particular guide is focused around the dev menu and commands I’ve found. ContentsEnabling The Dev MenuCheats […]