This guide will show you how to survive like a boss and turned your base literally into a fortress.

How to Obtain True Grit Achievement

What Is True Grit

True Grit achievement can be obtained by surviving up to 100 days either in Dread or Nightmare Zone. 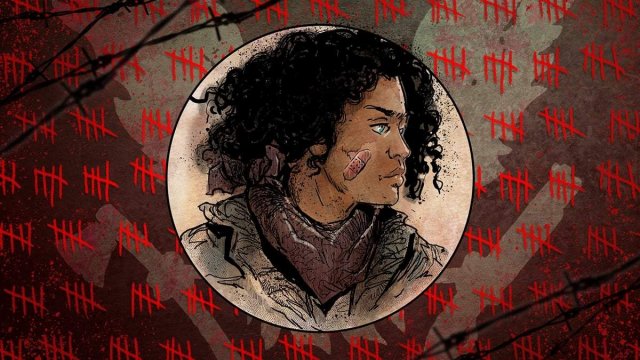 Before doing the True Grit achievement, i reccomended you to speedrun the required Boon above the intended dificulty you want to play with. In my case, i speedrun in Lethal Zone with 3 of my legacy pool survivors armed with a lot of C4, Scentblocks and Plague cure.

Make sure you have these two Boons: 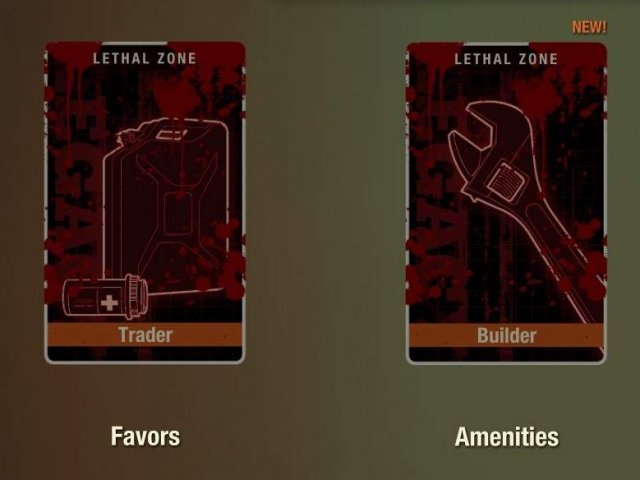 Amenities will grant you free electricity and water without any fuel cost and noises that results into increasing threat level. This Boon is OP, period.

Want to cheese off a bit? make sure you have a huge headstart. Favors will granted you 4000 Influence to spend with and Boon Traders which is a friendly enclave that sells you resources. Influence can be used for outpost building at early round and Boon Traders can be recruited as members too.

Before starting your True Grit adventure, make sure you select any of 3 survivors you sure to bring along. In my case, i’d go with the original 3 survivors from the tutorial mode, yep they still alive.

Make sure before ending the previous game, you stacked their inventory with useful and rare mods, craft parts, textbooks and even weapons. 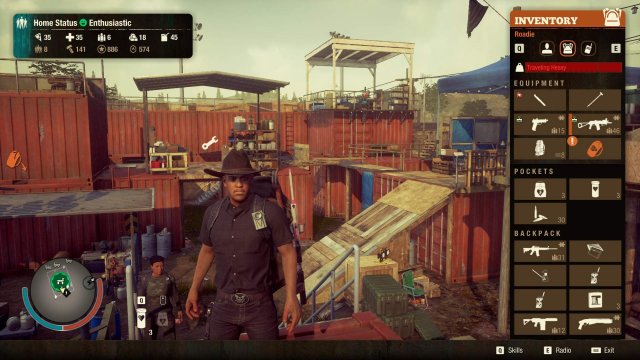 As you see here Roadie bring some heavy guns and ammo press beside a vehicle kit. 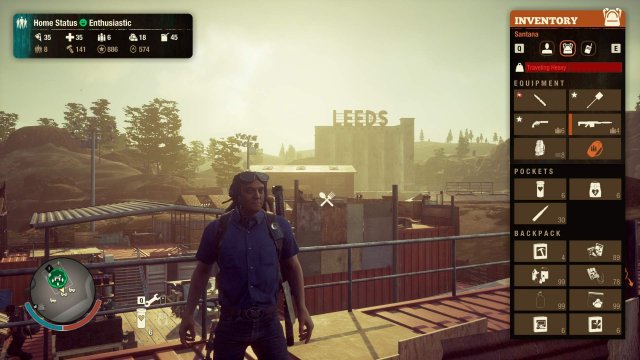 Meanwhile Santana are bringing craft parts such as seeds, ethanols, chemicals and even circuit parts alongside textbooks. Since he have maxed resourcefullness skill, he could carry a lot of books. 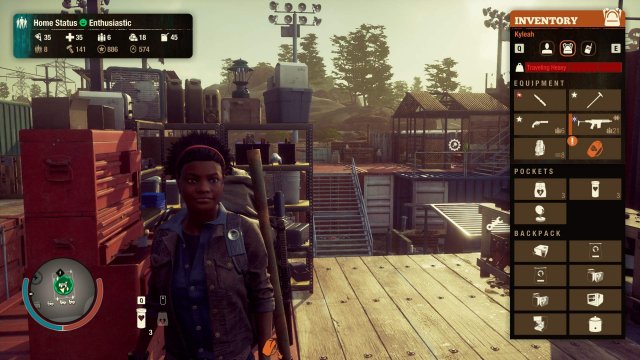 For Kyleah, she will be bringing tons of mods, make sure the mods you bring along are rare such as Network Relay for extra 2 outpost and Espresso Machine for crafting espresso shot to prevent fatigue.

Make sure three of them hauling some resources rucksacks too, ammo and building materials are a good choices.

Upon Settling in, What to Do?

Best place to live in? Meagher Valley of course. Best base to settled in for 100 days or maybe forever? Whitney Field all the way. 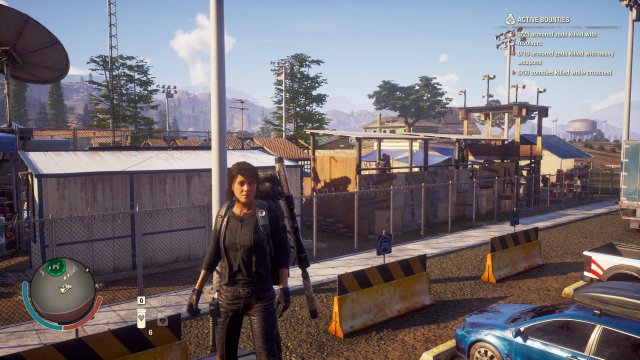 You can settled in with Clarington House first and upon reaching max capacity beds (6 survivors) you can either move to Mazzara Farm, Camp Kelenqua or Squelones Brewing Company and after you get 8 survivors in total you can move to Whitney Field.

Base Build and Management

I think you already know how resources increases and decreases works so let’s skip that.

In order to build an effective base of operations, use this method: 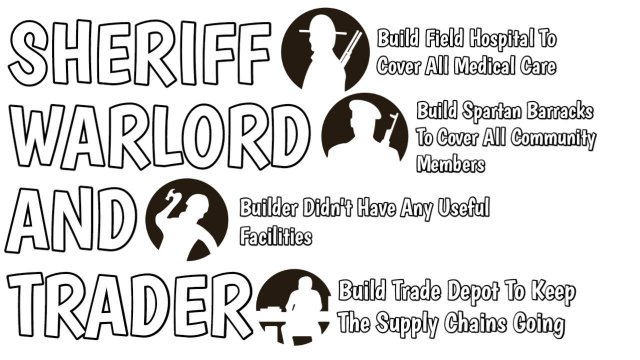 In my situation, a Trader lead my community, so upon moving to Whitney Field, build Trader Depot and Barracks first, after its finish demote the leader, and promote a Warlord, then upgrade the Barracks into Spartan Barracks to cover all community (8 beds) then build an armory (optional) because i need to craft some pro suppressors. As soon as all completed, demolish the armory and demote the leader, then proceed to promote a Sheriff this time, to build Field Hospital. As soon as you’ve done with your work, demote the leader then promote the Trader back.

After some time, my base layout look like this: I managed to get Red Talon Workshop Prefab thanks to my friend bringing it to me, thanks Bad-Rum Roger:)

You can build either Garden or Hydroponics, both have pros and cons:

It’s important to keep you community economy in great shape. 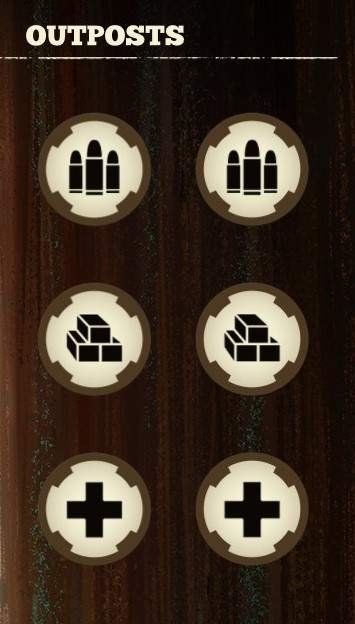 So how much i make for total?

P.S. Built-In facilities don’t have upkeep cost and workshop also dont have it since they have recycle feature which they produce 1 materials per day.

If your base are stable and secured, start making friends and establishing a network of human survivors. Getting them into “Allied” status is a rewarding experience because they will provide you with certain bonuses, giving you a bit edge in game.

Such example is my allied groups: It’s ok, take your time to build your community, you can keep expeling people who being nuts with you so you could keep finding best recruit to join your team.

Ladies and Gentlemen, meet my community, The Company. 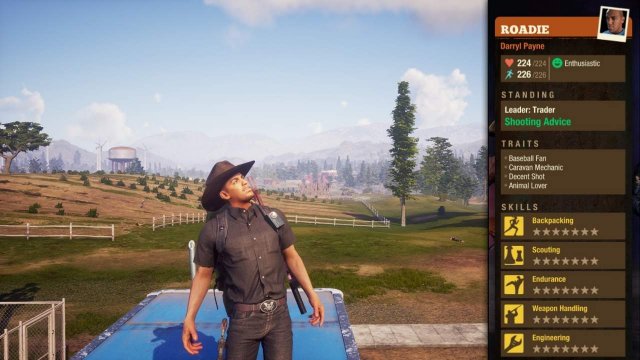 The current leader of The Company, Roadie realizes that leading a group of human is not an easy task. But being survived for a very long time, he is battle-hardened and wiser. Roadie armed himself with AKS-74 Valentine as his primary and OSS Silent Night as his secondary and RTX Crusher as his melee weapon. Being alive alongside his sister, Kyleah is invaluable to him. Together as sibling they overcome all challenges ahead. As a Caravan Mechanic, Roadie is good with tools and comfortable in his workshop. The second in command for The Company also she’s the sister of Darryl Payne. Both of them escaped the zombie apocalypse and went to an Army Camp where they met the soldier and doctor. Roadie owes Kyleah his life. Being Angsty means you have to be tough and strong. Kyleah uses Huntley-Basher PDW as her primary and OSS Silent Night as her secondary and Tankhammer as her melee. She always keep the water running and electricity working. 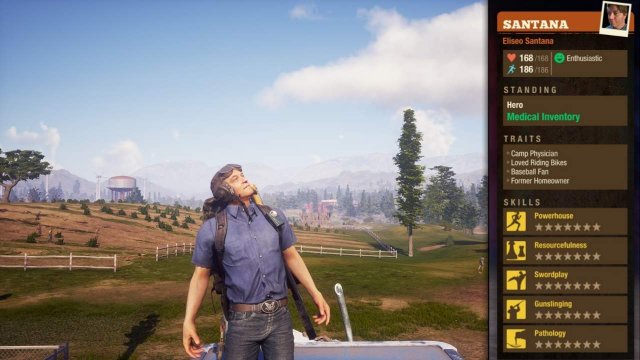 Meet The Company’s medic and the most OP Character i have in this group. He will hack and slash you until there’s no chunks left, he will dropkick your butt into coma, he will one-tap you noobs in a very short time. Santana is one of the 4 original survivors from the tutorial alongside Roadie and Kyleah, they’ve been together all the time, so it’s fair for them to stay together and forever. Santana also the one and only person in my legacy pool that survives Lethal Zone Twice so you should know he’s tough as nails. Santana possesses some of the strongest armaments in this game. He’s been equipped with M99X1 Timberwolf as his primary and OSS Silent Night for his secondary alongside Fire Axe as his melee. 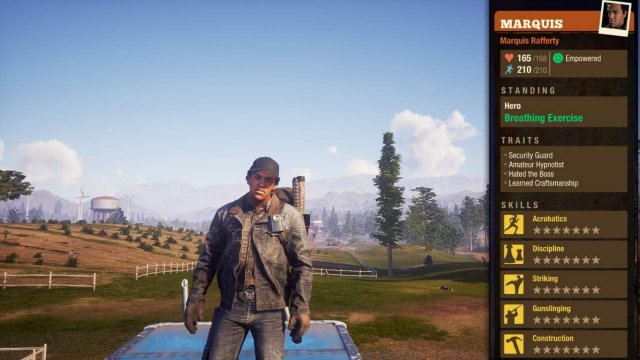 Working as security guard, although he never fired a bullet, the zombie apocalypse change his views. The 4th member of The Company and the former member of The Boon Traders. Marquis is not a gifted person when it comes to Construction, however he perfected his work by reading various books about construction, craftmanship, design and structure. He also hate his former boss. Regardless of situation, Marquis is invaluable when it comes base defense. Being armed with M99X1 Timberwolf, Suppressed G17 and Police Nightstick. Working as a high school teacher, the jobs crap, the payments crap but she still enjoyed nonetheless, Beck thought her skills was useless in the zombie apocalypse. But what she didn’t remember is she’s a Chemistry teacher. As the 5th member of The Company, Beck took care of munitions. She could make ammo with double of its amount with much less required parts. Beck also an expert when it comes to well…..Boom stuffs. She’s armed herself with a Modified Raider’s AR-15 with Holographic sight and selective fire mode with Sawed Off Model 1887 as her secondary. She also use German Antique Trench Tool as her melee. 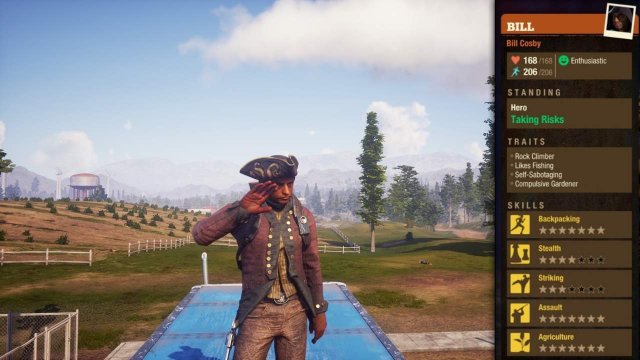 We randomly found Bill at an abandoned barn where he’s badly injured and in need of painkillers. Besides giving him the medicine, we also decide to took him into our group, Though he’s quite weird because he’s like to roleplay as Pop Culture character “Gentlemen Cadaver”. But one thing that can’t be denied is Bill is good with plants. As a botanist, Bill likes to take care of our community’s garden. As the 6th member of The Company, Bill will make sure that food supply remained intact and stable. Besides gardening, Bill also loves to fishing. Because of his eccentric taste of Pop Culture, Bill only use exotic weapons such as Sea Dog Blunderbuss for his primary and Model 29 for his secondary. Bill also use Bilge Rat Shovel as his melee weapon. 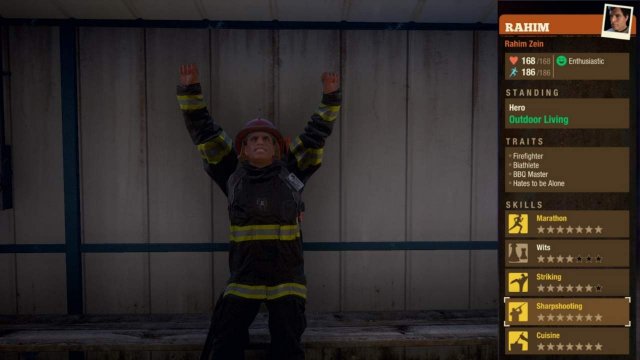 As a person who survives 9/11, Rahim have see a lot of lives lost. At a certain point he didn’t feel anything even on zombie apocalypse. However Rahim have a soft spot for his beloved group. Although he’s a firefighter he’s a pretty good when it comes to food and cooking. As the 7th member of The Company, Rahim make sure that his troops are well fed and happy as long as he have a functional kitchen. But when it comes to nutrition? well Rahim is not good with it. That’s what Allie loves about him. Rahim is unique because all of his weapons and clothes are from Critical Response Pack. He’s armed with M590A1 Shotgun as primary, Suppressed G26 as his secondary and Fire Hatchet as his melee. 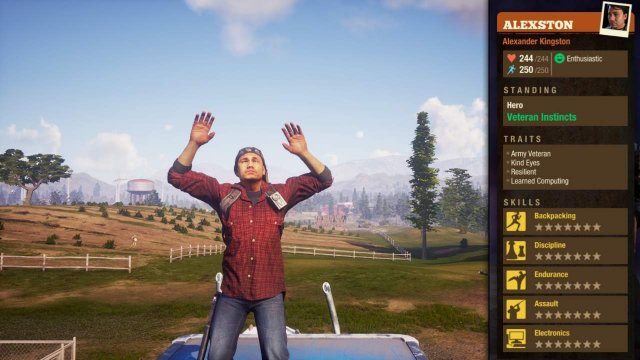 One of the 3 members of the former Surviving Soldiers who’ve been recruited into our community, Alexston is the oldest member in our group. He presumed he’s the oldest because there’s a time he will encourage us with “If the old man could fight, so do you”. Alexston is very wise and always careful with his action. As the 8th member of The Company, he provide recon for our scouts. Alexston also have a kind eyes and until a certain point, everyone in the community consider him as dad. Although Alexston is a retired Army Veteran, he never failed when it comes to combat, he first gain infamy when he survives an encounter against a pair of Blood Juggernauts with only a broken AK-47 and some handful of pipebombs. Alex loves to use his GSG-W as his main weapon and F45 Tactical as his sidearm. He’s also love his melee weapon, The Freedom Winger. 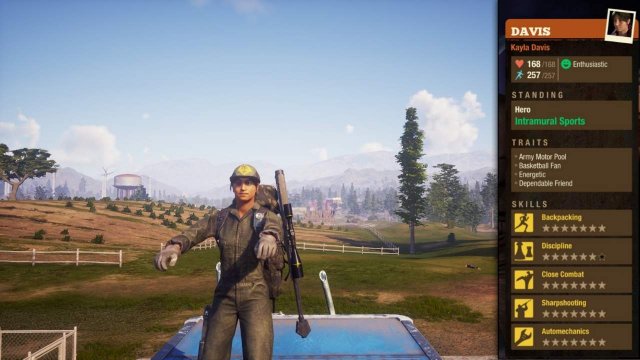 One of the 3 members of the former Surviving Soldiers who’ve been recruited into our community, Davis stationed in an Army base across Europe as a Auto Mechanic Engineer. Although she’s doesnt see any combat, she proved to be very reliable on the field. As the 9th member of The Company, she’s an expert when it comes to Automechanics, she have ability to build powerful vehicle gear that could turn some beat-up truck into an armored tank itself. Since she’s used to carry heavy equipments, She’s been issued with a bulky Model 99-50 and F45 Tactical. She’s also good in CQC only second to Allie with Echo X3 Karambit. 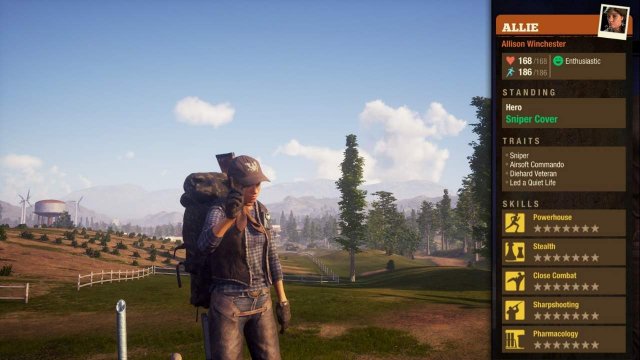 One of the 3 members of the former Surviving Soldiers and probably the newest member of The Company. But don’t let that pretty face deceives you. As a former US Sniper in Afghanistan, she’s a sharpshooter on steroids. Although rumour has it that she have a feelings for Rahim because there’s one mission where she gifted Rahim a box of seeds (No pun intended) as a thank gift to him for taking care of the community and keep all of us happy and well-fed. Allie being issued with Police Sniper Rifle, Modified Trumbull Gatekeeper and Supressed G17.

How to play through Nightmare Mode, relatively easily. ContentsUseful Tip for Surviving Nightmare ModeEasy NightmareBest Way to Kill a JuggDo Not Enlist a FollowerUse Your Car RoofDo Not Fire Guns […]

State of Decay 2 – Tips and Tricks for Getting Started

Before you play the State of Decay 2 game, you will definitely want to know these simple but useful tips and tricks. If you have any tips feel free to […]