This guide will help you understand where to place your companions and yourself and hopefully make your gameplay smoother.

The difference between good and bad formations is the difference between winning and losing. A good formation can help you win against impossible odds while a bad one can make your Pc get oneshoted by a lucky babau or your friendly mage being oneshoted by an attack of opportunity, this guide will help you clear some things about ai and make your characters more efficient

Where Does Each Character Go?

Before we proceed, I will break down every class to these roles, each role will be decided by you and how you’ve built your party:

Tank: The character that will draw the enemy mobs attentions, and survive their hits, high AC and hp usually, but a dex bad isnt bad either. Dont forget to give them conceal bonuses (like blur) too.

Melee dps(mdps): These are your squishier damage dealers, picture rogues, slayers, barbs etc, characters that will dish out high damage but can die easily or very quickly.

Mages: Either control or dps mages, these are your arcane spellcasters and sometimes buffers

Healers/Buff: These are your characters that specialise on keeping your other characters alive, usually clerics.

Ranged Dps(rdps): Again, these are your ranged dps, divine hunters,rogues, rangers etc. They specialise at dealing damage from afar. 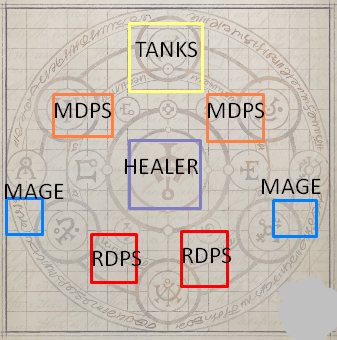 I will explain the reasoning behind this below.

Tanks Should be the first thing the enemy sees, this will draw their aggro into them, becareful when you pull mobs using your mage/rdps to always put them behind your tank and to send your tank to attack them once they approach your desired position (e.g a chokepoint or a door). This will draw their attention away from the mage, and into the tank. A tanks job is to keep the enemy’s attention.

Mdps cannot take many hits but instead can dish out huge damage, thats why you put them near your tank, so once your tanks have the enemies attention, they move in and start striking. if you put them too close to your tanks, they might draw enemy aggro so be careful

Healers stand at the center of the formation so their heals and buffs are in range to affect all your party members and not the enemies (move them a bit back if needed) they are not supposed to be in the frontline, as thats what the tank does. One person is enough to tank a lot of mobs, esp if the healer keeps healing him/her.

Mages are placed at their side so their spells, especially their cone spells do not affect party members, if they were behind the tank you might accidentally hit your own using color spray or burning hands for example, their position allows to attack enemy mobs w/o risking team damage (esp with spells such as banshee scream)

Rdps is quite straight forward, far from the enemies but still within their attack range to attack them. They can also be used to shoot down any mobs that decide for some reason to ignore your tanks and go for your healer mage. The reason for why you allow the healer/mage to be taking the hits instead of your rpds in case of a “slip” are 2 reason. 1) mages and healers can defend themselves incredibly well (see: cloak of dreams, mirror image, some heal spells not provoking attacks of opportunity) while your rdps will provoke an attack of opportunity with every hit they make, and if they make for instance, 5 hits per turn, thats 5 attacks of opportunity.

Note: Remember to always pre-buff before hard fights, enchant your weapons at starts of dungeons and to always check enemy Saving throws to use control spells more effectively.

Pathfinder: Wrath of the Righteous – All Restored Crusader Relics Guide

This is a guide to all of the restored relics in crusade mode, and what gear you can get from it. It should be noted that some of the relics […]

A melee build that bury anything in a storm of bites and fists. Areelu / The Hand of the Inheritor / Deskari / Baphomet were utterly crushed in a turn. […]

Pathfinder: Wrath of the Righteous – How to Solve Slab Puzzle

Slab Puzzle Solution Guide Core of the Riddle – Blue The solution. Recommended for You Pathfinder: Wrath of the Righteous – How to Defeat Hosilla and the Water Elemental Pathfinder: […]