Burning Hells is one of the most uniquely designed sets not only for Warlock, but also in the entire game. It offers quite a few different ways in building around it as well as the potential for endlessly scaling damage output. I was originally planning for this to be another triple progression guide, highlighting the possibilities for both speed farming and endless pushing. However what ultimately put me off of that idea was the fact that I couldn’t keep any sort of gear progression in check between the different builds, because every iteration used completely different mechanics and items but also had one ultimate crutch – spamming Soul Warp scrolls since they have no cooldown. That is what you have to do on Warlock to solve most of its issues when it comes down to it and then it doesn’t make much sense to present two other different build variations that ultimately achieve the exact same thing. More importantly though it’s a life-based build, making the mastery requirement for entry a measly 470 mastery levels so it makes even more sense to build into it early assuming you have the necessary gear. So with that in mind let me begin by telling you…

What in the burning hells’ does this set actually do?

First up it makes Flaming Hells stack infinitely. While that passive states it can only be triggered by a Warlock fire skill, in reality it also works off of Quadruplets’ fire skull because they’re inherently allowed to trigger player on-hit effects. The set’s 3-piece bonus further enhances that synergy since the skulls count as companions but not as a companion skill which enables Flaming Hells stacking five times for each triggering hit. The set also enables a Demonic Fury mechanic that this build completely ignores.

The aforementioned synergy with Quadruplets ultimately allows us to scale different sources of companion damage as the base of our Flaming Hells, then through the use of Instant Combustion rune forcefully Detonate it which also opens up scaling through attack speed stacking. The highlight of this build however is using Crown of Innate Probability which doubles all of our passive skills’ trigger chances. The notable mentions include: 100% Combustion, 100% Hell Caller, 100% Sudden Death, 50% Soul Feast, 50% Spirit of Torment and finally the coup de grace – 100% Corpse Shatter. Every chilled mob we kill explodes for 30% of his maximum HP which is then also transferred to a Combustion proc and scaled close to ~10x times. This simply means that all you need to do is to kill one affected mob and it sets off a chain reaction blowing up everything on your screen, making it insane when it comes to clearing random anomalies but pretty mediocre at bossing. 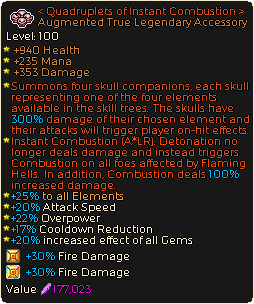 Quadruplets TL – Gives us four skull companions, one for each of our main damage elements. All four of them count as direct damage sources so they individually trigger our “life on hit” as well as all of our various passives. The fire skull will be the base source of damage for Flaming Hells while the frost skull will apply our Bone Chill. They also don’t count as a “companion skill” for our set bonus.

Instant Combustion LR (Anomalous) – Turns Detonation into our main trigger for Combustion, essentially allowing us to scale it with stacking extra attack speed. 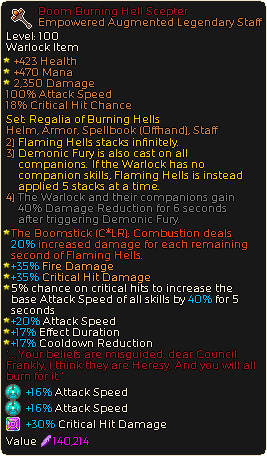 The Boomstick LR (Crafted) – An amazing buff for our main damage dealer, essentially allowing us to scale it through “effect duration” stacking. 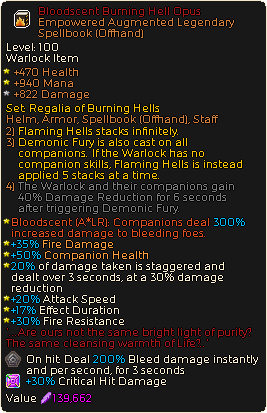 Bloodscent LR (Anomalous) – One of the best runes for scaling our companions’ damage, enabled by the socketed Hematite gem. 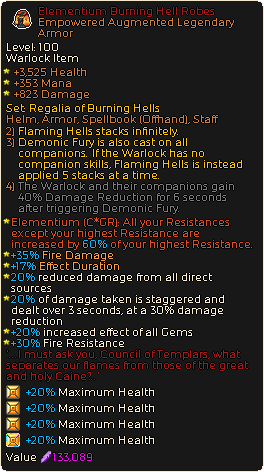 Elementium GR – The easiest fix for capping resistances on any build. The resistance of choice here is Fire just for thematic purposes. 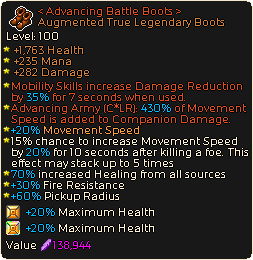 Advancing Army LR (Crafted) – Amazing damage boost for our companions based on our movement speed and it works with the Kill Haste enchant. 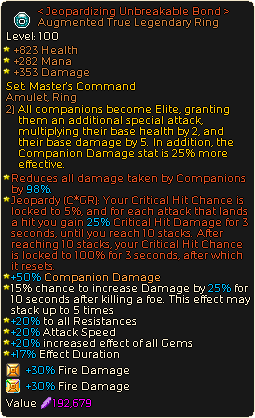 Unbreakable Bond TL – Master’s Command is an essential set for any companion based build.

Jeopardy GR – Saves us from rolling crit chance on gear and it gives us a lot of extra crit damage. 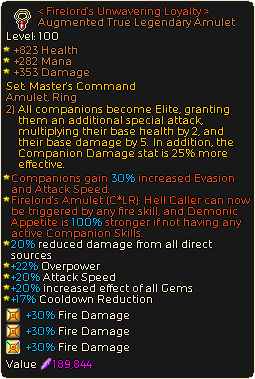 Unwavering Loyalty TL – Master’s Command is an essential set for any companion based build. 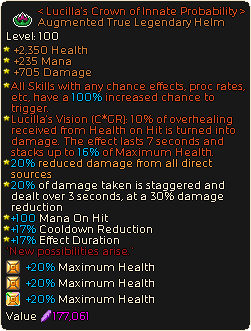 Crown of Innate Probability TL – An insane boost to all of our passive procs and triggers, pretty much the centerpiece item of this entire build.

Lucilla’s Vision GR – The source of our base damage. The biggest con of this helm/archetype is the build-up and maintenance of the damage stacks which is done entirely by our four skull buddies, so if you’re going back to town don’t forget to quickly sick them at the target dummies.

Note: The mana leech enchant is only needed up to a certain point and can be re-rolled to extra critical damage. Once you get closer to 3k mastery you will have enough of a mana pool to sustain entirely by triggering Soul Feast. 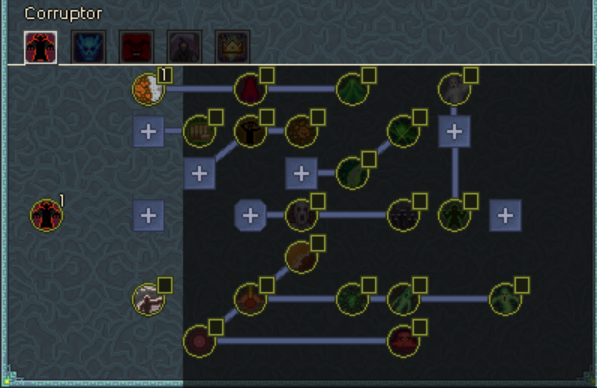 A lonely but extremely important passive point for some attack speed. To spare you the details – we need 268% attack speed (with Enrage enchant) to get over the 8-frame breakpoint and this build gets 269% all thanks to this seemingly insignificant skill point. 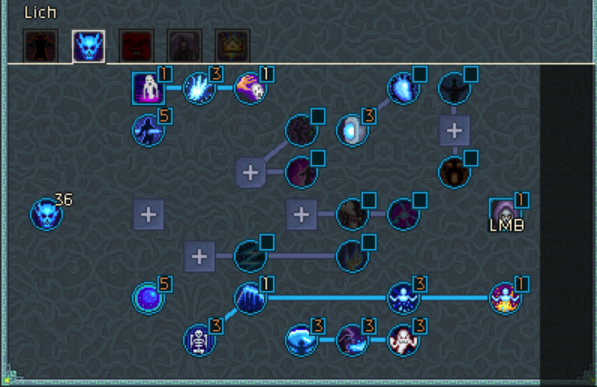 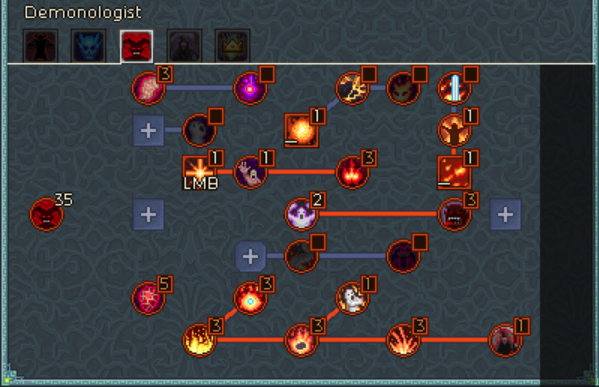 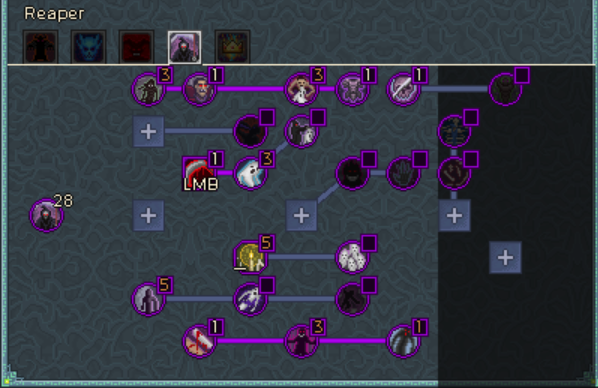 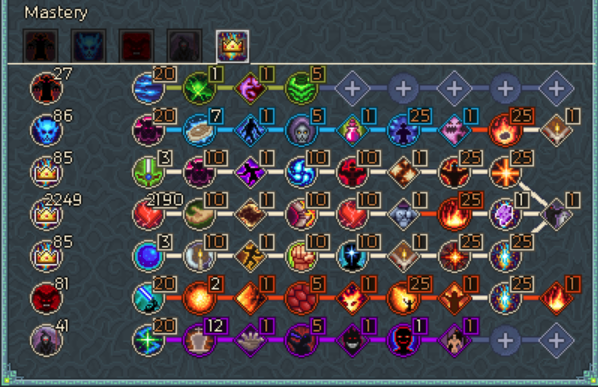 Lich Mastery – Chilling Haunts + Ghastly Grasp give our spirits some amazing crowd control and we also get huge damage scaling for both Corpse Shatter and Combustion.

Class Mastery – The most unusual thing here (and on our gear) would be the lack of Crown Slaying which sadly just doesn’t work for companions. You can swap Picker-Upper for Crafty to get some extra mats during leveling.

Demonologist Mastery – This build wouldn’t work without Widespread Inferno because it enables our Combustion to proliferate through entire mob packs. Sadly we can’t benefit from Demonologist Focus since the base source of our damage is our fire skull which doesn’t count as a skill from that tree.

Reaper Mastery – Some semi-useful passives here with Death Come Near Me as a finisher.

A total of 470 mastery as minimum requirement after which you dump everything into Health.

Ritual of Banes, Fire Nova, Fire Storm do not need to be cast so just use the X from the options to remove their buttons.

Use Codex of Soul Warp for movement and enabling the DR bonus from our boots. Alternatively you can stock up on Scrolls of Soul Warp through gambling, effectively solving all of Warlock’s clunky issues. Scrolls don’t have a cooldown which also frees you up to use Codex of Healing Touch on auto-cast, making you near immortal.

This video is kind of a bad representation for the build since I am comitted to using a Codex for warping. If there’s one archetype in the game that makes best use of scroll spamming it has to be a life-based companion build, since Soul Warp force teleports all of your minions next to you. You just jump a few times between packs, your fire skull proliferates your Flaming Hells and then you spam Detonation until the screen blows up. Rinse and repeat. Theoretically there’s no upper soft cap for the build since Corpse Shatter’s damage scales off of mob HP – if you can tank it then you can (eventually) kill it.

Have an alt problem? Want to level from 1 to 100 in under 10 minutes? I know I do. Beware spoilers included! Note: This will only work for softcore characters. […]