Don’t read this until you’ve finished the game and had the true literature club experience! This is a guide for players who are looking to see everything they missed the first time. Contains spoilers and won’t help first time players.

So, hopefully you’ve had the Literature Club experience by this point. You haven’t seen everything until the end credits roll, so make sure you’ve gotten that far before reading this. If not, turn back now–this guide won’t be of much interest to you. It won’t help you and won’t make much sense. Contains spoilers, of course.

Are we ready for this?

This is a guide to finding little things that you may have missed. To see all the dialogue, a special ending, and other events of interest. It also explains a little bit of how things work, but won’t be very specific on most details so you can experience them for yourself.

It covers every major secret that exists inside the game, but may have a few minor omissions. It doesn’t tell you how to get all of the CGs, what to do when you have choices to make, or how to progress through the game.

Throughout parts of the game, there will be little files created in the game folder that you can open and look at. These get deleted later on, so it’s a good idea to keep the game folder open if you want to see them. The first of these is an image file created on the morning of the festival. After that, there will be some text files created, with messages presumably from Monika.

You may remember a scene where you see an error message on the screen that an exception has occurred. It actually creates a real error report file in the game folder which will contain a bit of dialogue, also from Monika.

The character files and some other messages are codes containing interesting things when deciphered, but if you want to learn more about that, you can visit this discussion on Reddit. 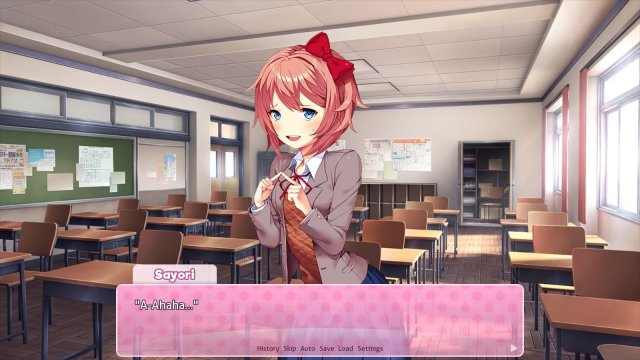 I won’t cover how to play the poem minigame here, but based on the words you pick, each girl will either love your poem, hate it, or think it’s just okay, and there are a number of variations based on their evaluations. This is how to see all of them. 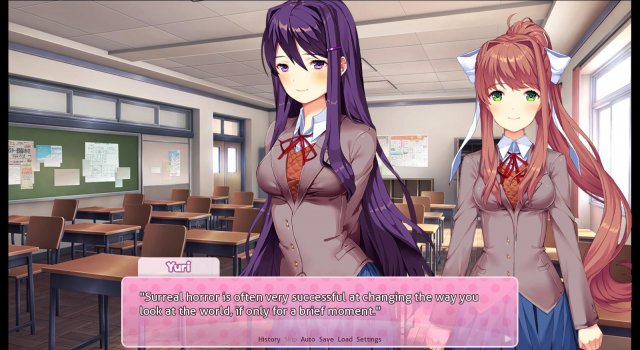 The second day is basically the same as the first arc. There is a random event related to Natsuki (see random events below).

Monika’s dialogue follows two paths depending on who your first poem appealed to. On the second day, she makes condescending remarks about the girl who liked your poem the most. On the third day, she either greets you warmly and starts the first discussion about Yuri if on the Natsuki route, or tells you that you saw something you shouldn’t have on the Yuri route. On the fourth day, she shows a glitch poem if on the Natsuki route, or dismisses you with one line if on the Yuri route.

The glitch poem is different if you’re on Windows and in fullscreen mode. 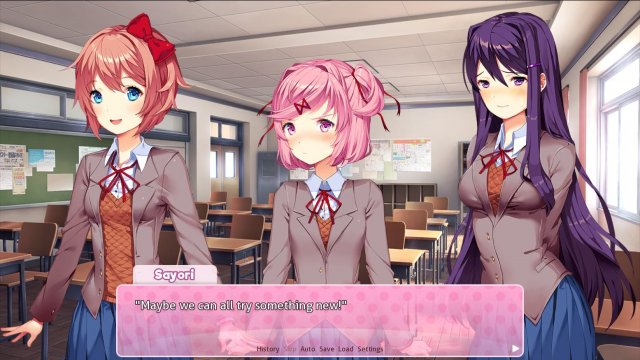 In the second arc of the game, there are a number of scenes that happen only some of the time. This will make every playthrough a little bit different. Here are the list of things you might see.

The special poems you get are decided in advance for each playthrough. There are 11 of them, and 3 are chosen at random. You’ll have to play a few times before you see them all in the game.

You might get a different message instead of the usual “this game is not for children…” (1/4 chance). Some of these are funny.
You might also get a creepy version of the menu where the characters are in black and white (1/64 chance, once per playthrough).

After Monika brings you to the classroom, you might get glitch Monika (1/3 chance)
Beginning on the first day, you might get a special classroom background with Sayori. This can change during the days at various points, too, but there’s a 1/6 chance each time.

If you wrote a poem that Natsuki hates, her eyes might pop out for a few seconds (1/3 chance).

Yuri might be broken on the screen when she appears (1/3 chance).
Natsuki might suddenly have a weird moving realistic mouth as she says several nonsense words as black text (1/4 chance).
After you get a special poem, the game screen might become red and distorted and the music will be altered to give you a sense of dizziness (1/3 chance) or you might get a special Sayori-themed mouse cursor (1/3 chance).

At the beginning of the day, you might see an distorted image of Sayori’s face. This has a 1/16 chance of occurring, but only if you didn’t see the Sayori eyes image during the poem minigame the previous night (see below).

You might see a drawing of Sayori with scary blank eyes after you finish the poem each day (1/6 chance, once per playthrough).

End of days 2 and 3 – you might see a glitch text word (1/401 chance per word). None of the girls like these. If you click one, some weird things start to happen to the graphics and sound. There is a 1/11 chance of hearing a girl say ‘ba’ when you click on a word after this, once per playthrough.

End of day 3 – Monika sticker hops from off the bottom of the screen (1/11 chance). It still counts for whoever normally likes the word.

Ghostly Yuri sticker hops when you pick her word (1/101 chance, once per playthrough).

At the end of day 3, during the poem minigame, take a look at Yuri’s sticker, particularly her arms.

On day 4, you’ll be given a choice of who to help. It’s difficult to not choose Monika, but if you manage to choose one of the others, you’ll see a special screen with Yuri’s eyes to make sure you pick Monika.

During the nice weekend with Yuri, she has 1,440 lines. They doesn’t mean anything, though there will be a long and familiar block of text in the history. If you quit the game and restart, you’ll be taken forward to the next panel of her scene. 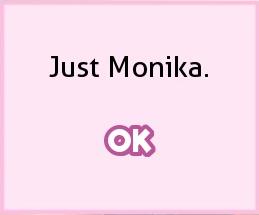 She has different dialogue depending on what platform you’re playing on to tell you where the character files are. You’ll probably see the one for Steam since you’re reading this.

If you’re running either OBS or XSplit to record the game, Monika will perform a prank to scare you.

If you’re not streaming, Monika will check to see if your character’s name is different from the one on your computer. She has some dialogue if this is the case.

Monika has 54 conversation topics, though you won’t see one if you didn’t see her glitch poem by going down Natsuki’s route during the second act. You’ll see each one before they repeat, at which point, you’ll get the skip option. Try using it for a special message. She also has a message if you try to save, and several if you quit and restart.

There are two basic endings to the game that depend on whether you’ve seen all of the CGs or not, but there is another, depressing way you can end your game.

If you’ve started a new game, but haven’t reached the part where you enter Sayori’s room the second time, deleting Sayori’s character file will make the game end in static as soon as it starts up, then a sad picture and text appear.

Starting a new game with Monika’s character file deleted will upset Sayori, and she will delete everyone and shut down the game, leading back to the aforementioned ending. 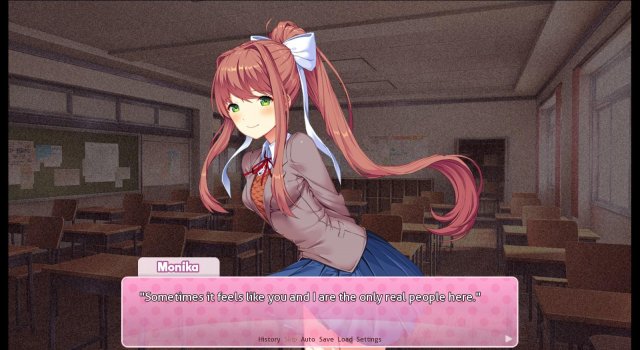 You may notice that the game doesn’t store saves in its saves folder. Where they actually are depends on your platform, but should you try copying a save to protect it from deletion and then load it later on, you might just get scolded by Monika for cheating.

And that’s basically it! There are a few minor variations based on poem order that aren’t covered, but you should be able to find those easily. 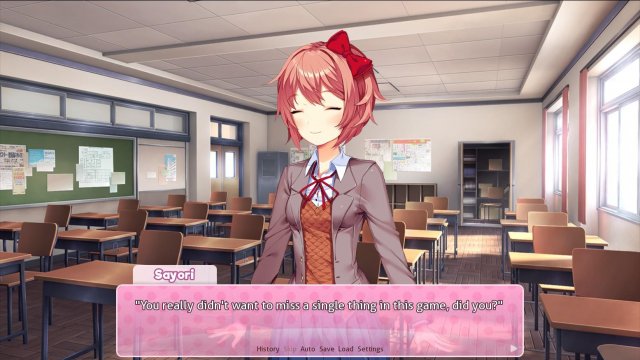 Other DDLC Guides: Walkthrough (Girl Guide). How to Unlock Monika’s Bonus Route. Secrets Guide. Monika Route This is where the boys start getting separated from the men. Monika’s ending is […]

Don’t just reinstall the game everytime it says so! How To Close the game before doing this. Try to experiment on deleting this file during in-game. IDK what happens TBH… […]

Yuri.CHR is hashed with BASE64 and it contains a secret message Part of the Message If you found this note in a small wooden box with a heart on it, […]