A guide to surviving and (hopefully) thriving as a mission running Spy!

For my Spy captains, I like to go in with the aim of eventually moving into crew combat which is why my Attributes and Skills are the top priorities. 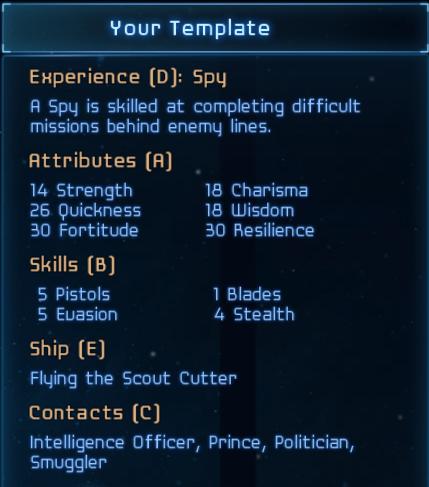 High Fortitude gives my captain high HP to reduce the chance due to crew combat, ship combat and random accidents.

I play on Hard (first captain permadeath level) and so Resilience for Death Save (every point of Resilience = +1% Death Save) and Morale is a very important stat.

Quickness aids in both Initiative and Weapon Accuracy for Pistols. Also contributes to melee and ranged dodge. This makes it quite important to keeping our captain alive and deadly in combat!

Charisma and Wisdom are raised slightly to help with Skill + Attribute tests encountered when doing missions.

Strength adds some HP, but is less effective than Fortitude. It also improves accuracy for swords, LMGs, HMGs and snubbers, but this captain only uses Pistols, meaning that the Minimum Strength of 14 is more than adequate.

I have found that in general skills are best left to the crew, with the exception of Captains going into personal combat. This is why this template has skills at priority B, as having 15 points of bonus skills combined with top-tier attributes will make this captain a fighting machine!

1 Point in Blades to let us use an offhand blade for extra Parry (melee defense). I never use this to attack with, but for a 1 skill point investment you get +3 Parry, so its worth it.

4 Points in Stealth. Stealth is used both with Stealth armour (+1 evade per stealth up to armour max), and also to improve crit chance for the Spy while in Stealth Mode (more on that later). As the best stealth armour I have seen in-game (bought from ex-merc) has a max of +8 stealth evade, a stealth of 4 (when combined with the stealth points from the Spy job) seems a good compromise to make effective use of the stealth armour nice and early on, without wasting too many points that can go into evasion.

5 points in Evasion Pretty self explanatory, dump all extra skill points in here. Although our captain has high HP, we really don’t want him to die in crew combat and risk ending our game.

As for a crew combat captain, Attributes and Skills need to take the top 2 priorities, now everything else has to find a place in the pecking order.

Starting contacts are important for mission-focussed captains, and the Intelligence Officer, Prince, Politician, and Smuggler all offer Missions. All but the Prince also buy Intel, which will be handy for when we start Spying. The Prince is an excellent starting contact, offering Trade Permits, Faction Rank, and Edicts (Bounty Hunter Warrants)

Travelling in a tiny ship with a small crew will mean people level really fast, so having Experience as a low priority won’t be a hindrance for long

Flying aroung in a Scout Cutter may not seem to be the wisest choice for a Star Trader, but a market-leading Fuel Consumption of 1 fuel per AU and low hyperwarp cost make it a cheap option to run long range missions with. A small crew also helps keep costs down and experience shares high, but don’t expect it to do anything other than fall apart in ship-to-ship combat.

Your Captain may well be built for combat, but on a ship as cramped as the Scout Cutter compromises must be made. You can always respec talents (while in orbit or landed, cost $2500) when you want to transition into more of a bounty hunter role

The Sly Move talent is great, allowing you to auto-pass those pesky stealth test on missions.
Scouring Search is also good, upgrading a ‘Risk’ Card to an ‘Intel Reward’ card while spying. This talent will dramatically increase the effectiveness of your spying.

If you can get Spy to level 11, the Secrets Unbound talent offers a chance of gaining intel every time you enter orbit of a system.

I tend to build the Captain as a Spy/Military Officer/Combat Medic or Spy/Pistoleer/Combat Medic. Sometimes I will add Smuggler into the mix if I can’t afford a sole crew combat focus.

In my experience, combat medics get targeted a lot by enemy fire in crew combat, so assigning that role to your captain who has a massive dodge pool will hopefully ensure the survival of those crucial healing talents.

With this in mind, use the Disappearing Act (Buff, +35% Parry, +35% Dodge, Engages Stealth Mode, +(10% + Stealth) Critical) talent to enter Stealth mode for even more evasive goodies, and then use a combination of Shadowed Fire (Pistol Attack with +25% Ranged Accuracy, +25% Dmg, +2 Armor Piercing; Requires Stealth Mode to use) for Damage and E-Suture/Cleansing Purge for healing.

If you want to make the captain more of a healer, I would recomend changing the template to include extra Doctor points, as this will make a huge difference in effectiveness. I tend to take a separate combat medic anyway to let the captain focus on killing, but the option is there.

On a tiny ship like the Scout Cutter, you only have 2 other officers and need to make them count, as they have to cover all the remaining specialties.

If you haven’t taken it on your captain, take Miltary Officer for the Stiff Salute talent (automatic ship combat draw with hostile Military Officer or Zealot) to help you out if you get caught spying or end up displeasing a faction. The military officer talents should focus on the Patrol Card game, particularly with Commanding Sweep, which replaces a risk card during Patrol with a “Rep Gain” or “Influence Conflict” card to make gaining Rep easier

Your Quartermaster should consider taking Contract Bargain to help stop people leaving (not that that’s usually a problem in a non-combat build, but accidents happen)

Your ships doctor is vital for keeping people healthy – I would probably push straight to level 5 to ge the Life Saver talent (prevents crew death) to cover most eventualities.

Smuggler for Hideout talent to prevent mission cargo/passengers/prisoners being discovered can be very helpful to allow you to surrender to Hostile faction officials without fear of failing a msision.

Engineer gets Port Maintenance for free component repairs upon landing.

Merchant is very helpful for gaining contacts fast, plus the pirate getaway talent Jettison Cargo – also the Negotiation test auto-pass talent will be invaluable in missions.

Diplomat also has talents to increase mission pay, so that another good choice.

The initial problem with the scout cutter is the severe lack of crew bunks (12). This means that you start the game understaffed, however this can be easily sorted out by dismissing one of your soldiers (as your captain will take their place in crew combat anyway) and hiring a new pilot instead from the nearest spice hall. Later on, as your crew levels you will have sufficient surplus Ship Ops to dismiss a crew dog or two to make room for some specialists.

As you will not be relying on ship to ship combat for some time, you may also want to dismiss your Gunners, but think carefully as they do have some useful talents for Patrolling, and are very useful for when you upgrade to a larger ship.

The other option is to upgrade your barracks to level 2 at a Starport, which will give you plenty of spare bunks (18 crew total).

Bounty Hunter has some great Crew Combat talents, like Hunters Challenge and Unfaltering Ire to deal morale damage to the enemy. Once someone drops below 40 morale, they become liable to be stunned and miss their go, with a higher stun chance the lower their morale. Due to space constraints with the number of officers, I normally try and hire one as a crew member.

This section is all about customising your ship to best suit your Captains activities – spying and mission running.

All of the weapons. Seriously. If you end up in ship-to-ship combat you’ll likely be wanting to escape anyway, so more than maybe 1 torpedo tube is a waste of space. This also lets you dismiss Gunners (although you may want to keep one around for talents later on, for when you upgrade ships)

Stuff to Replace it with

Use the initial 27 weeks or so (where you only get trivial package delivery missions) to your full advantage, taking on as many as possible to maximise rep and money gain.

I tend to play the early game pretty cautiously, making full use of combat avoidance talents like Stiff Salute. I creep around the galaxy running Covert Ops missions and Spying to gain Intel.

I tend to find a handful of miltary ranks help in making encounters go smoothly, plus the mission pay increase is most welcome.

I will usually use this time period to make friends with a few other factions via patrolling to gain easy reputation bonuses, and hopefully gain some cross faction contacts. At this point, try and avoid getting mass negative rep with any factions – your ship is VERY fragile and we don’t want to be fending off Bounty Hunters!

Intel is sold to contacts that I want services from, or for faction rep (selling Intel is the easiest way to repair poor reputation with a faction, providing you have an appropriate Contact with that faction that will buy it)

The advantage of a small ship like the Scout Cutter is that despite the ship being small and maintenance costs low, mission payments stay the same so your profit margin is higher!

Crew also level much faster, which is vital for gaining the higher level talents that will make this build a success.

At this point, my crew has levelled up to level 6-8 or so, and I have a good bankroll of cash. Now is the time when I start to branch out into Bounty Hunter missions, having hopefully bumped into one or two appropriate contacts along the way.

Make sure you only accept CREW COMBAT based bounty hunter missions!

We still don’t want to be having particularly low rep with any faction, so keep on patrolling and selling intel to keep things more or less cordial.

This is where you can start thinking about moving up to a larger ship, using your existing crew as the core and bringing on new hires from your network of contacts. Military rank brings better recruits, and is a worthwhile investment.

By this point, you’ll have a powerhouse of a captain in an awesome ship, so maybe it’s time to track down some legends…

This is a Mini-Guide, aimed at providing players with a cheap and solid ship. Introduction In the unforgiving Void your most important possession is your Ship. It’s is your principal […]

This guide will help new players understand the ins-and-outs of Crew Management, what is killing your crew and causing them to leave, and how to fix it. ContentsIntroAvoiding Physical and […]

This is a map seed with a short guide on what to do get you on track. Descriptions on why this is an easy map seed is included. Can play […]