A guide on LA Jomon…

This nation is set on Japanese lore and has a variety of unique game summons, ninja assassins, underwater fortresses with strong shrimp and shark warriors and the Ryujin dragon shapeshifting mage. LA Jomon nation is dependent on invading underwater provinces and creating forts to create early Ryujin and to conquer the seas. This nation has extremely high competition when it comes to water if LA Atlantis is in the game. Ranged units tend to be a problem with this nation because none of LA Jomon’s units have shields.

La Jomon has access to every magic path except for blood, with death being accessed through a conjuration summon. 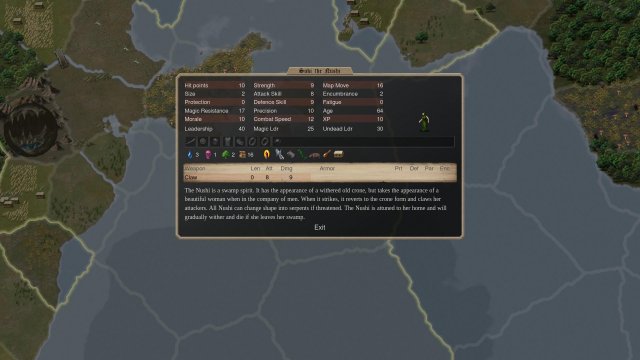 This mage costs 25 water gems and can only be summoned in swamps. She cannot leave her home for long without dying, but she is a very powerful mage that can shapeshift into a giant snake. This is your only way to access death for your nation. If I have enough spare gems, I empower her in death to make skull mentors and cast death rituals. In the late game, you can empower her with fire and she can summon Dai Oni, from the EA version of this nation. This may not be a super exciting thing once you summon them because you dominion doesnt have turmoil so you have to find somewhere or somehow to increase unrest so they summon onis. But other than that they can be super cool because they are sacred and super powerful. But i’m not sure if summoning the most powerful Oni should be in conjuration 8, where I can just wait half a year or so to summon a titan.

The main goal for LA Jomon is for them to get into water usually and use their Ryujin and shark warriors to kill everything. This is hard because the waters are usually contested by the water nations that will be rude and claim you stole their water. So most games you should prepare yourself to get into the water somehow, whether it be by SC pretender, items, mercs or one of your national heroes.

After you get into the water, everything gets a lot cooler with your new capabilities. You get to recruit your Ryujin, which I like to thug up and sent out with crab general thugs and take stuff because it makes me laugh and works, so win-win.

It would be smart to invest in a dwarven hammer early in the game when possible and give it to a mage that can forge many ice brands, vine shields and a reinvigorating item. Regeneration rings are pretty nifty to have too and important, but not necessary unless solo thugging. You can have a nature mage behind your Crab General and cast regeneration on him and protection, just remember he is a crab so he is slow and has a hard time getting to the front lines sometimes. Your Ryujin and Crab Generals are pretty thugable and can really help you out a lot in supporting your armies. The only thing you should really be afraid of when you send these guys out is facing anything that tramples units (undead Behemoth) and LA Atlantis units because they have magical weapons and are cold resistant. Their sacreds also have weapons that weaken whoever they hit, which is really bad for thugs. 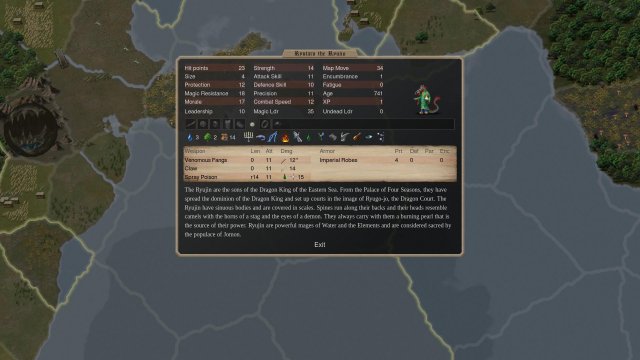 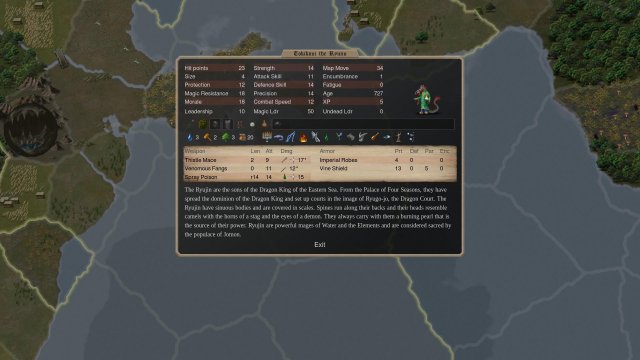 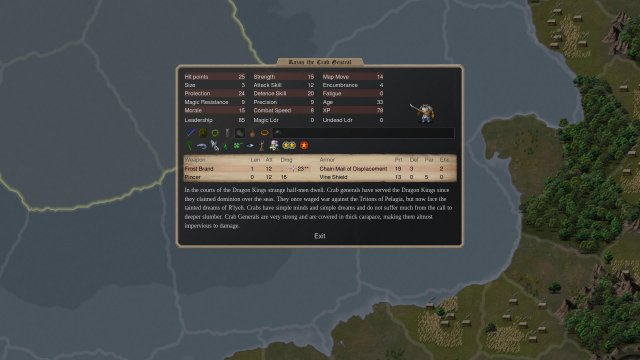 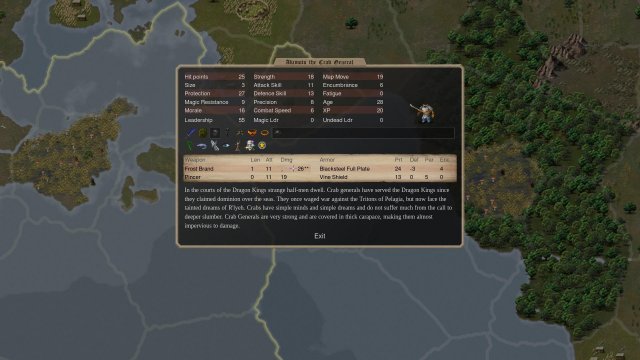 LA Atlantis is a pain to deal with because they have units that are cheap with some resource intensive really elite units. They are also cold resistant so they pretty much have one over you in every way, including being in the water faster and easier than you. I have heard that when certain nations are played that they feel like are a direct counter, that they will lose and should restart the game. I ask that you reconsider, and face this challenge, so you can learn from your mistakes and be a better dominions player.

If you are having trouble fighting them underwater, invest in evocation 5 and use the spell poison cloud. You might need to use another spell to not kill your own units from being poisoned. Poison does not affect undead, so you would need a way to kill their undead that they raise. This is another unfortunate weakness that you have: no underwater recruitable priests. There will have to be priests or mage priests sent underwater with water breathing items to help fight the undead if needed. The evocation 6 spell ‘cleansing water’ is a water spell that does damage to many undead and demons each cast. 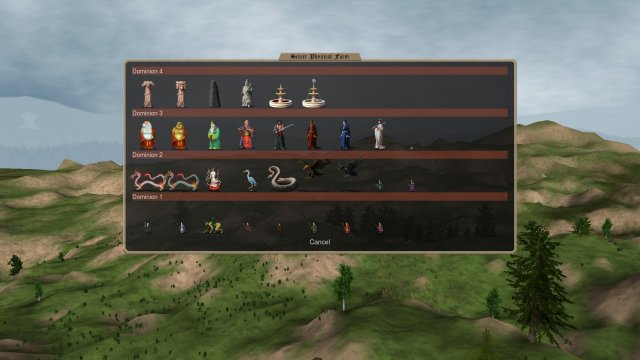 These are the pretender chasses choices that you have. This part seems to be very difficult for many that choose this nation because they want a good bless with good scales and fast SC early expansion, but that is hard to create without tanking some scales. Some choose to have blesses focused on their mages, and others aim it towards their capital only units (which I never use).

Your scales should take at least one point of production because most of your units are resource intensive. I like to have one order sometimes so I can have more room to recruit my shark warriors and aka-oni samurai, but this is in no way needed. Growth would help in the long run when running into problems with income, luck gives you interesting heroes, one at least that can take units underwater with him. If you are very lucky or plan on using luck in your pretender creation, keep this hero in mind. Magic scales seem tremendously useful and can really help you with getting through levels in conjuration and having early battle mages. Strategies that are based on using shark warriors would be very resource and recruitment intensive, but may prove effective if supported with mages. I like for my bless to be strong with this nation and tank my luck and magic scales, and my bless being aimed towards my sacred mages because the two capital only sacred units seem usless compared to what one Ryujin could do.

In a briefer explanation: you should have production and growth at least. Depending on how strong you want your bless you can tank luck to misfortune by one or two and drain by one. Luck gives you gems, money and a total of three heroes. Only one of them is worth having because they have two water and has water breating (40), so twenty human soldiers.

I am going to show you two examples of pretenders I have made or seen be used that seem to be useful for LA Jomon. 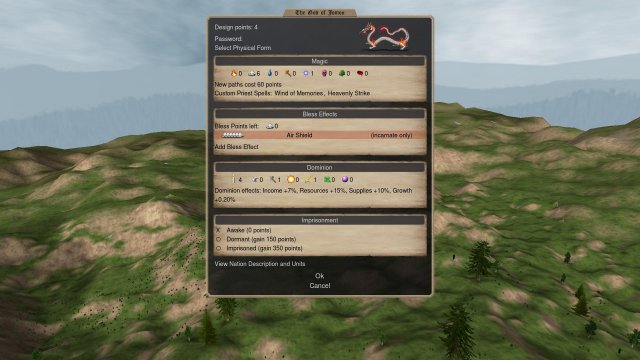 This is one of the common ways to play this nation because it solves the problem with units not having to deal with arrows and getting into the water quickly to build a fort. People usually choose to take negative scales for more magic and blesses or for more production. I personally do not agree with this pretender type because it does not fit my playstyle, but it is quite game changing as soon as you build your first underwater fort and Ryujin. If you do choose this way to play, please keep in mind that your monks that have air can grant air shield on many squares each casting. Any commander with one priest level and one air can do this very useful spell.

People like this fast way of playing but the Celestial Dragon is not too great without buffs, so it is possible that he may die if sent out not scripted to do mistform, ethereal body or astral shield. Also keep in mind that fatigue may make him die early and be weak before being able to actually attack the enemy, try keeping his fatigue and any thug’s fatigue below 30 before they hit battle or they will suffer stat penalties. 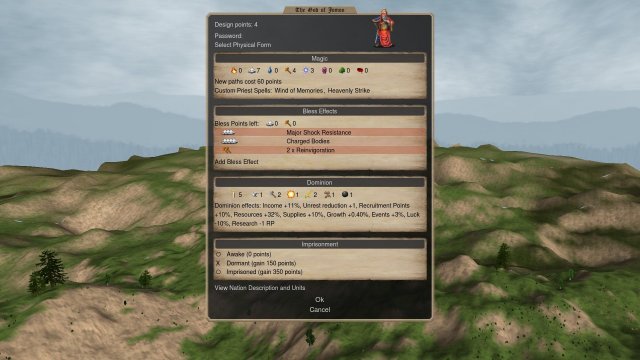 The Celestial General is a titan that is chosen for his three paths in magic and ability to have good blesses that can be focused on your sacreds. He is also a good SC when geared up but I would put some flying boots on him just in case he needs to run away. I have chosen him in the past when I want a good reinvigoration bless for my sacreds and sometimes a far caster too for the mages.

Dominions 5 – How to Pretender, Bless, and Thug Design

This is a quick and dirty guide on building your pretender, your bless, and your thugs, by giving a general overview and a list of good options available. ContentsGuide to […]

Some MP and online terminology for game concepts. Dominions has its own terms and nomenclature, developed over time as people played the game. Here i’ll list some and what they […]

Dominions 5 – How to Buff Air Elementals