Don’t play well with other AI civs? Wondering why Pedro suddenly goes bananas, or Cleopatra hisses like an Egyptian she-snake as she randomly decs a war on you? Outraged that Peter the Great has all his troops all over your border, but demands you move your troops, which are in fact on your side of the line?

Or maybe you are just eyeing that Secret Service achieviement for actually playing a diplomatic game with the AI. Whatever your reasons for pondering their bizarre seeming behavior, a diplomatic & peaceful game is not only possible in Civ VI, but it is much more realistic, and extremely pleasing gameplay than with Civ V’s phony voting system, and provides a change up from just tramping them under your hooves because you know you’ve got the power. We will try to explain our view of AI behavior and agenda, with some examples from our gameplay. This can be accomplished in MP as well with Co-op if desired.

Agendas: Everybody’s Got One 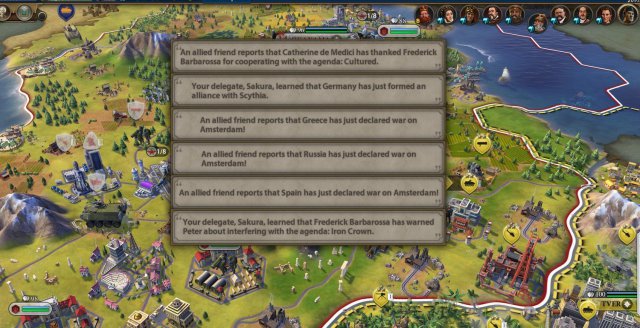 Every civ leader has both a personal agenda and a hidden agenda. As you can see in the Rumors pictured above, the AI civs are verbal now about who is stepping on their agenda.

The personal agenda is a character trait and is always the same. For example, Pericles has the Delian League agenda. He likes Civilizations that aren’t competing for the same City State Alliances. This means that if you have Pericles on your map, don’t send more envoys than he has there.

The hidden agenda is assigned at random, and changes from game to game. For example, I played as Hojo for a Science Diplo victory. Russia was right beside me, and had the hidden agenda Exploitative. This meant he clears all features and improves a high percentage of tiles. He dislikes civs with a low percentage of improved tiles, or that found national parks.

Meanwhile, Teddy Roosevelt was on the other side of my hemisphere, and he had the hidden agenda Environmentalist. This means he doesn’t clear features, and he founds national parks. He complains when you chop down trees.

Their agendas were conflicting, so I had to be careful about chopping down too many trees if I wanted to be friends with Teddy. Yet, I had to look productive for Peter the Great. This sounds harder than it is, because each program is looking out for its own best interests. That will be explained more in other sections.

Gorgo was the most reticent leader I was able to ally in that game, simply because her personal agenda is “With your shield or on it,” which means she dislikes civs who have never gone to war. Her hidden agenda was superior air power. Tomyris is Backstab averse, and hidden paranoid. The quandry here was that I was playing a peaceful game and couldn’t go to war to please Gorgo. But, I had airplanes & choppers late game, which I used to kill barbs for the Spain AI, and Gorgo was pleased with me 😀 Fortunately, Tomyris was just glad that she was on the other side of the world from me, or she would have felt threatened by my air power and deterrance military. 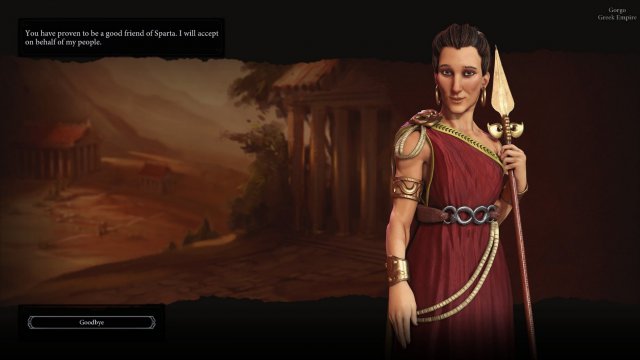 First, some general observations about AI behavior in Civ VI:

You do not have to settle on the other side of the world to win. If you do, you will come into a whole new world with established civs, and most likely invade personal space. I chose to stay home for my Science Diplo game with this achievement and was able to ally 8 civs at once.

You could call it bribery. But, it’s always been human nature to love gifts. Even bosses on the job love gifts, even though this always seemed inappropriate or unethical in nature to me as an employee.

The 1st approach to an AI should be to answer politely and send a trade delegation for the measley 25 gold. Introductions matter. Don’t see this as a net loss, because they will usually respond in kind. And, if they reject it, you won’t lose anything here anyways.

Expect to trade twice the value at 1st with the ruder civs. Some are more easy going & will give you a good deal at the beginning, but usually you will only get a deal similar to 150 gold for 10 GPT for 30 turns. If you have very little to give, even giving a tiny amount in exchange for nothing is a gift, since it is the thought that counts with the AI, as with humans.

This trains the AI to think of you as being an investment. They will see that they need to be your ally, because you are a net profit for them. They even often act surprised that you are actually gifting them. It seems to be disarming with AI as with humans.

As soon as the AI is willing, go ahead and establish an embassy in their capital. Some will immediately. Many won’t.

If you get the cold shoulder when you ask for a Declaration of Friendship, it’s because the AI feels like it doesn’t know you well enough yet for that level of committment.

Instead, create some tangible lines of communication by asking for open borders. Then immediately send a trader to their most productive city, so you benefit as well. They love this, and will even tolerate things that irk them if you begin trade fast enough. Also, you are making yourself vulnerable to them, since they can use those roads & open borders to trample you later. But, hey, friendship is about trust.

If you are rejected at this stage, as you will be by aggressive leaders like Gorgo, then repeat the gifting phase until they’ve softened up a bit, and you’ve impressed them perhaps with your reputation, most likely through the Rumor System.

Then, once you have open borders & are trading with the civ, the next steps are to ask for a DOF and then an alliance. Then ask for a Defensive Pact, whether you get that or not. It definitely seems optional for success.

You’ll notice the little moving leader icons have indicators that change with your developing relationship. A green circle means Declared Friends. The little Flag means Alliance formed. After that, there is no difference in appearance when moving to different levels of access.

If at any point, the leader rejects a proposal, then trade more and gift more. This can be done back to back in one turn, as in gifting 10 gold, then 10 more.

So you’ve got open borders and are trading with a civ. Then you’ve DOF’ed, formed an alliance, and have Research Agreements & Defensive Pacts. You move from Open access to secret access during this process.

Now, it’s time to cement the deal with a final gift, which can be done immediately after the alliance, but just in a seperate transaction usually. I usually give something nice, like a luxury (diamond perhaps.) Then when you reopen their screen you will see you’ve moved to Top Secret Access. It definitely seems to me that a gift after everything else is needed.

After that, you will find it very important to pay attention to the end of Alliances. Always be ready to renew those treaties instantly. Otherwise, fallen negotiations will result in the AI declaring war on you before you can declare war on him. They definitely seem paranoid to their vulnerability, because you may see them moving towards your border with troops as the time for elapse nears. This is simply a defensive tactic. Renew and you should be fine.

If you are aiming for Top Secret access with 5 civs, then you will have to be sure to maintain the relationships you already have while working on newly met civs, by following the same strategies you’ve used thusfar. Trading and Gifting. Trade every route you can establish. And, gift early and often. 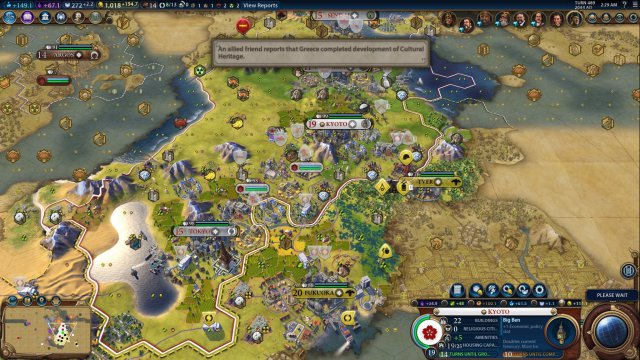 This game I played as Hojo with a diplomatic Science victory turned out to be the most fun of any I’ve played, and it was the most satisfying victory yet. But, it was an intense game, though I was never at anytime at war. And, it was extremely realistic. Peace is often not cut and dry, but often a Cold War. It was certainly an edgy Cold War in that game. Throughout the game, I had to tolerate troops from a variety of civs marching around in my territory. I had to watch them closely, and pay attention to the rumor system, which was even more informative with all of my allies feeding me info. If a civ had troops circling my capital, I hurriedly opened the trade window and presented them with a substantial gift. In every case, even when it was rumored that Peter planned a suprise invasion, this tactic backed him down. I started the Japan game second, after beating the Religion victory with Russia. I skipped around a bit in games, and had been away from that Japan game for a couple of games when I came back to continue it. I noticed immediately that Russia was circling a satelite city I’d founded, Fukuoka as pictured here. Because of seeing the reaction of other leaders to founding cities in other games I’d played in the interim, I realized I had forward settled him and penned him in when I founded that city. He was unable to expand. So, I opened the trade window, and simply gifted him the city for as much gold as I could get, which was all of it, over a thousand. He withdrew the troops and backed away. No war was declared, no fighting took place, and I really lost nothing of value. But, I gained enough gold to do some substantial purchases that early in the game, more than the cost of a settler. Then I built up a deterrance force, I also made sure to keep a network of counterspies in my Civ to prevent acts of sabotage.

Civilization VI – Gifts of the Nile Deity Difficulty (As Egypt)

This guide will tell you how to win as Egypt (Cleopatra) in Gifts Of the Nile on deity difficulty. Other CIV VI Guides: Five Tips for New Players. How to […]

Five Civilization 6 Tips for Beginners 1) Be aware of the ‘show city details’ button. This has many uses. First of all it summarizes how your city is doing, and […]