A detailed guide on becoming a Creature of the Shadows as well as what abilities vampirism grants your character.

It is important to note that there are two types of Vampires in Skyrim. The Vanilla base game common Vampires and the Dawnguard pure blooded Vampire Lords.

Although both Vampires and Vampire Lords have roughly the same abilities and appearance, Vampire Lords are more stronger and have the ability to transform into a Vampire Lord as well as access blood magic in that form. 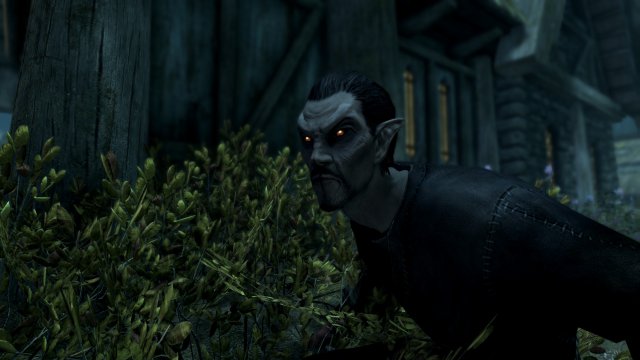 There are multiple ways of becoming a vampire, and different ways for both types of Common and Pure-blood Vampire.

Upon becoming a vampire the character will have blood orange glowing eyes as well as a gaunt face and pale skin, your character will also be commented on by NPC’s such as “Your eyes have a hunger to them” or “my god, your as pale as the snow!”.

To become a common vampire of Skyrim, your character must find a vampire enemy, they can be found in caves such as Broken Fang Cave and Movarth’s Lair etc.

You character must contract “Sanguinare Vampiris” by being attacked by a common vampire in battle. Killing a vampire will make you lose the chance to become a vampire unless you encounter another. Once you have contracted the disease you must wait three in-game days as your disease progresses eventually turning you into a vampire.

To become a Pure Blood Vampire your character must be bitten by another pure-blooded vampire, fortunately this is easily abtainable early on during the Dawnguard Questline.

For those who don’t want to be spoiled for the Dawnguard Questline, you will come across a point where you will be asked if you want to be turned into a pure-blooded vampire or be banished. Obviously you’d choose to become a vampire.

Powers and Abilities as a Common Vampire

Vampires have certain powers and abilties which can grow stronger the longer you don’t feed on blood, however, the more powerful you get the more Skyrim’s citizens are untrustworthy of you.

Vampires have a few base effects: 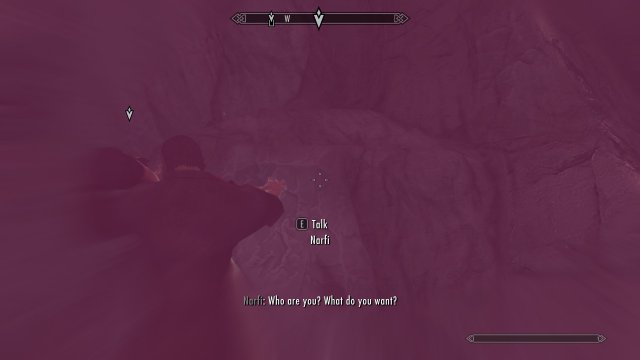 Vampires must feed to retain their blood thirst and to revert back to Stage 1 of Vampirism so their vampiric nature is not revealed to the world.

Vampires can feed by sneaking by a sleeping human and select them to which two options pop up “Feed” or “Pickpocket ______” selecting feed enacts an animation where your character bends over the person on the bed and bite into their neck, the screen will go red and then they will go back to sneaking.

Vampires are Stage 2 can also use Vampire’s Seduction to feed, using it on someone awake and standing they will be calm and then selecting them and selecting “Feed” will enact an animation where they will move the persons head to side revealing the neck and bite into it, the screen also goes red and then the vampire will retreat back to their spot.

Powers and Abilities as a Pure-Blood Vampire 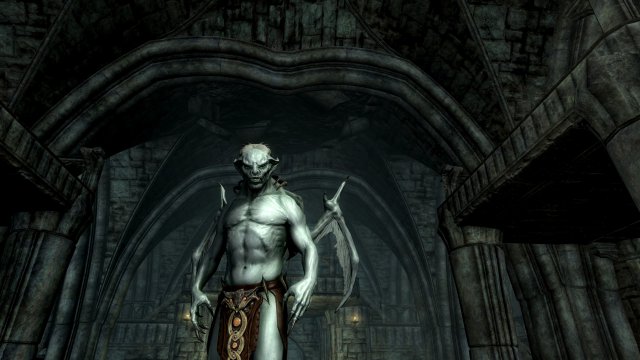 After transforming into the Vampire Lord form, the vampire lord will hover just above the ground with blood magic making them levitate and they will hold up thier arms holding two spells: Drain Life and Raise Dead.

Drain Life is the spell on the right hand that is there by default and cannot be changed. It acts the same as Vampiric Drain but as a explosive projectile, it is the primary way to feed within the vampire lord form and recieve perk points in the vampire skill tree.

In the left hand there can be a variety of spells, switched between each other in the favourites menu:

In the Vampire Lord form, vampires can activate their powers dubbed “Night Powers”:

Within the Vampire Lord form, the vampire lord can decend to the ground and attack with their claws. The claws can be deadlier with the use of the “Poison Talons” perk.

Feeding as a Vampire Lord 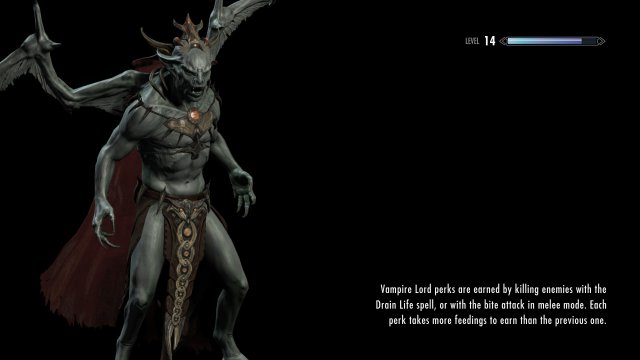 Feeding in Vampire Lord is different to the normal vampire form, feeding more and more grants a perk point to be used in the Vampire Skill Tree, feeding can be done by killing a being with Drain Life spell or a power attack bite in which happens while walking and randomly when attacking a human with low health the vampire lord will grab the human and bite their neck.

Unlike Werewolves, Vampire Lords can stay in their vampire lord form for as long as they like and can use the “Revert Form” ability to transform back to their normal vampire form. 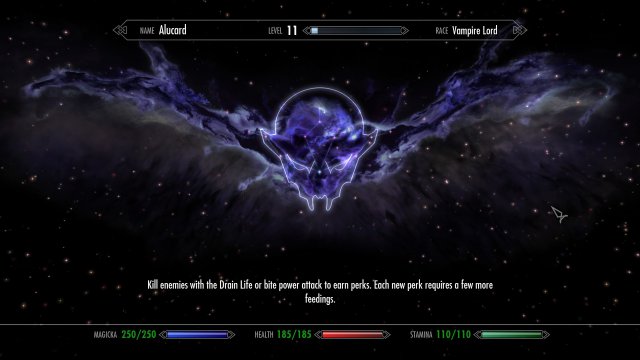 Within the Vampire Lord, vampires can access their Vampire Skill Tree in which they can use perk points to upgrade their powers and abilities.

Amulets of Night Power and Rings of Blood Magic

Through the Dawnguard expansion’s Vampire side, your character can recieve two radiant quests from Feran Sadri, “Amulets of Night Power” and “Rings of Blood Magic” to which you will be rewarded two Amulets and two Rings that can affect your vampiric abilities in Vampire Lord form if you wear them just before transforming.

Curing Vampirism is the same way for both Common Vampires and Pure-Blood Vampires.

Talking to inn keepers and asking for rumours reveal that a wizard named “Falion” in Morthal is studying Vampirism, when visiting him your character can ask if they can be cured and Falion offers to cure them if they can give Falion a filled Black Soul gem.

Once given a Black Soul gem Falion will ask to meet at an unmarked location called the “Summoning Stones”, when there your character has to stand in the middle of the summoning stones while Falion does a ritual, the screen will go black and once the screen comes back Falion will notify that their Vampirism is cured.

Opening up the console with the tilde “`” key located left of the number 1 key on the keyboard and typing in “setstage 000EAFD5 10” or using the “showracemenu” command and switch between the races and back to your characters original race, as well as the “changesex” command cures vampirism.

How to get maximum Fortify gear and potions in Skyrim Special Edition. ContentsIntroPreparationWhat Sorcery Is This?!SmithingAdditional Info Intro In this guide I will show you how to use the alchemy […]

The Elder Scrolls V: Skyrim – How to Level Up Quickly

In this guide, I will cover a few methods to level up yourself and certain skills quickly. These methods will not involve any sort of exploits or mods. Other Skyrim […]

A detailed guide on becoming a Child of the Moon as well as what abilities lycanthropy grants your character. ContentsBecoming a WerewolfPowers and Abilities in Human FormRing Of HircineThe Rings […]