Jeffrey is great for single and multiplayer games. Early game, he doesn’t shine as much as some other characters, but even on simple items the durability boost is nice. Even with the bone knife, it can seem that some mid and late game items drop at fairly low rates, so to be able to craft items, especially clothes with increased durability, is really nice for yourself and your friends.

William is another great character for both single and multiplayer games. His boosts early game are very nice, the cold resistance doesn’t seem like much, but helps more in blizzards when you don’t have the resources to sleep and are eeking it out, and the defense makes it so you are not insta-gibbed by boars, and with the defense bonus’ of late game skills/items, make him a good team tank to draw aggro from wolves.

Vivian is another great character for both single and multiplayer games. Throughout all stages of the game, the bonus wood and ore gathering are sweet, and if you die allow for you to catch back up a little better, as early game is really demanding on those resources. The crit chance I have seen proc fairly consistently, both as initiations on boars, and attacking wolves from range from behind. However I would not bet on it for most situations, it is just a nice surprise now and then. Highly recommend upgrading speed on her ASAP, as chasing situations will lead to from behind attacks which may proc the crit.

Robin is the first character I would recommend as primarily for multiplayer. His stats don’t particularly lend to any portion of the game, in fact his stamina recovery, which is the best of his stats, isn’t even available until you unlock sprinting (ok its the first unlock but still). The bonus to ranged attack power is nice, as it is nice to have a ranged person in your squad, but the mats can be expensive both for arrows, or just in terms of item slots (arrows, throwing stones, bow)

Oliver is another character for both single and multiplayer games, however I almost wouldn’t recommend him for single player as Vivian is far superior. Vivian will gain boosts of +2-3 ore/wood per swing when gathering, whereas Oliver will receive -2 to -5 used wood/ore on common low level creations, and -20 to -30 on his personal few times per game building upgrades. You can do the math with time saved in swings per full stack for Vivian, and the flat item discounts for Oliver, but if you take my word for it, Vivian wins. In terms of roles or particular boosts, he does decent in the beginning with trap making when you are trying to cut every corner to get that first boar, and the same in late game with trap crafting when the mats costs more, but overall Vivian beats him out as she has a similar and better perk, and the bonus crits as well.

Like Robin, I would recommend Cole for only multiplayer. His melee attack power won’t really shine until mid to late game when you are tossing aggro back and forth between him and William, although maybe it will save you from a wolf that didn’t hit your traps or something. Same with Robin, his stamina recovery boost isn’t unlocked right away. A cool guy to give the machete to though.

Are you playing with your little brother? Or maybe your homie is drunk? Do you like playing recklessly? Chang is perfect for the person who is probably going to die a lot. His skill cost thing is kind of helpful when you are trying to reach fur as fast as possible in the early mid game, but where it is really going to shine is if your associate or yourself is pretty much guarenteed to have a more reckless playstyle, and you know that person will be dying, and restarting often. My favorite is gathering xp, as it improves faster in the mid game when the xp cost is greater but you are still slammin resources.

Anna is a cool late game character. When you have your food and cold under control, and the only thing that you have to worry about is getting ravaged by two wolves, Anna can turn the tide there. However, although useful at all stages of the game, the impact on early to mid game is kind of lackluster. I still have not crafted adrenaline on her yet, but I imagine if you did, even in single player she would become a powerhouse, you just have to get there first.

Outcome: Jeffrey is my personal favorite just for my playstyle, but I think in a multiplayer game every character is viable in one fashion or another. My least favorite is Oliver, as I feel Vivian beats him in every catagory, so I would really only choose him in an 8 player game. My dark horse recommendation is Anna. 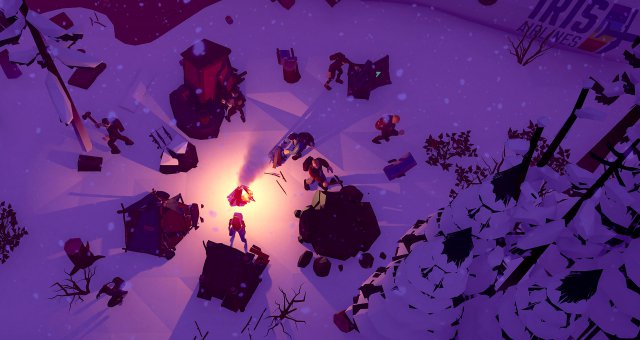 Again, I feel like this game is designed to be played around multiplayer, so I will be making recommendations in that light. I will also do my best to avoid spoilers. I also assume that you know how to equip items, lay traps, use the basic controls, etc. Also, it may be my method is not the best one, but it is what I have found out so far.

The Gist of Early Game

In the beginning, you start at the plane. If you havn’t played the game before, I recommend following the tutorial, if you have, I would skip it as the crafted torch really does nothing for you and is wasted mats.

First thing first: Craft yourself tools, and get to gathering. A basic gameplay mechanic is to place a fire next to the tightest density of resources, so you can gather 3-6 trees, or a whole stone node before having to leave the radius of the fire and lose your heat. Your main priority in the beginning is to get 2 rabbit traps, and upgrade your workshop to level 3. Any shrooms, berries, etc is just a sweet bonus.

The reason for this is simple traps are the money maker for early to mid game. A note on traps: Rabbit traps are great, but sometimes rabbit pathing leads to them just being wasted (Thats why you carry two, to place on either side of the rabbit and hope it gets attracted to one of them) Ideally, with rabbit traps you place one, run away and then the rabbit immediately runs to it and dies. The next best thing is you place it in a choke point like real life, and then unlike real life, chase the rabbit into the trap at the choke point. However some rabbits are really resistant to this and will run past you instead of routing down to the choke point. I have found the best method is place two traps, both as close as possible, but where the natural rabbit pathing will take it, and hope for the best. Sometimes it takes a little time.

Back to simple traps. These guys are the bread and butter: Why? You group three simple traps, attack a boar, and then lead him into all three. If you hit him once or twice to start, he will definitely die. Sometimes it only takes two traps, but three is the guarenteed number to prevent a chase. Maybe a trap gets wasted if you place three, but if you place two and it runs off, you wasted two and now you don’t have food. Simple traps are the bread and butter that will take you all the way to the late game.

Ultimate Guide Gather 30 wood and 20 ore before anything else. Craft a workshop and your shelter right beside the planes fire for warmth during blizzards.  Use the leftover wood […]

Where to find the eight types of seeds for your HUB “Home Sweet Home”. Other The Wild Eight Guides: Basic Tips and Tricks. Ultimate Guide. The Seeds After you gain […]