Hi, just completed the New Home Map in Frostpunk on Survivor mode and wanted to share what i painstakingly learned to be a good starting build order.
Since this map snowballs at some point and gets hard to lose, the start is everything, together with some luck.

First distribute your workers correctly. Theres pretty much only one way:

With the first ressources, build your 8 shelters, a medic post and a workshop. Also, fully staff both latter. You’ll have atleast 5 sick people in first night. Of course, activate the heat as late as possible, which would be 17:45 and deactivate it at 8:00, at least at the first days where it’s -20 degree only. That way the children manage to collect enough coal.

On second day you need to get started on food. Build a hunters hood and a coockhouse. But before you start to prepare meals (2 children are enough), get “Soup” first, which will be your 3rd law.

You might need to balance coal, steel and wood with ~5 workers, so you keep enough coal and have enough wood/steel for research and buildings. Especially since the next thing should be the beacon. One doesn’t actually have to rush it, though. Many events are scripted. The most important thing is to go and rush the automaton. Don’t go to Gloomy Cave, it’s the one with the Baer and either way it’ll be bad or worse for you. Too many new peaople early will starve you. If you are lucky you can go to Crash Site, which might have a nice stack of valuable wood. Else do the first couple Main Quest Spots. Just don’t go to Manchester!

Then it’ll get way colder and you don’t want to let your people collect the ressources unprotected. Get a Gatheres Hut on a double pile of coal and to the bottom right double wood + steel a little later. And you should have built and manned a second hunters hut, else it’s over soon.
You can get a second workshop and probably want a second medic post if too many are sick.

From there on it’s a lot of balancing the economy. The most(!!!) important thing is to not break promises and to not get to 0 Hope or 100% Discontent. You can reset then unless you have a robust foundation, like days 20-30. Also, lucky scouting can help.

The two most valuable outposts are by far the steel and steam engine ones, you should get both.
If you have 2 sawmills and can get 3 coal mines up, the map is almost won. Be very careful with the Emergency and Extended Shifts. As soon as you go to Manchester or the forced Event happens, you get to choose between Faith and Order. Faith is easier in my opinion. And don’t leave the choice screen. You can choose a law there even if it is still on cooldown.

From there on, choose as requiered.

Then it pretty much depends on your ressources. You want T1 early for Generator Range, so all houses get heated. Don’t bother with Steam Hubs if you can avoid them. Stick to Coal Mines, they’ll be enough. Sawmills are enough as well. Most of the time the steel will be the bottleneck, that’s why you’ll need the outpost.

Don’t rush for Automatons, use them very late to automate the Mines, Steelworks and Drills without the need to heat them.

Discover every spot except Winchester. It’ll give you a lot of time to stabilise your city.
You can pretty much take in everyone easily, but mby avoid the 35 children. Sounds cold but children just eat and won’t do much in your midgame. They didn’t in mine, because i do not choose Child Labour All Jobs Law. It’ll make people mad. For same reason i avoid Corpse Disposal, Triage and get House of Pleasure late.

Here a screenshot from my playthrough. As you can see, one can easily have a ton of ressources. 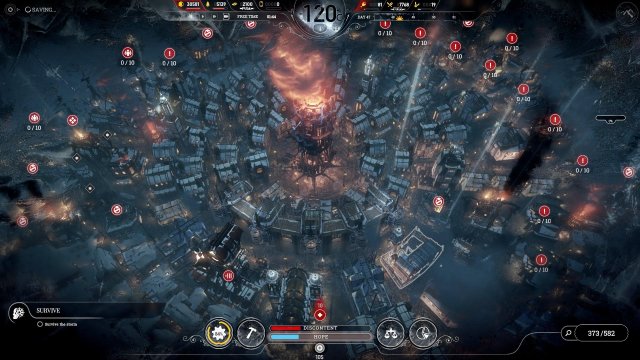 A comprehensive walkthrough on the unlock conditions for the Golden Path hidden achievement Other Frostpunk Guides: Some Basic Hints and Tips. How to Build a Successfull City. ContentsHidden Achievement Guide, […]

Frostpunk – How to Get Winterhome Achievements

If you’re a busy man and want to get both relevant Winterhome achievements in one go, this guide is for you. Contents100%ing Your Dreadnought on Winterhome SurvivorIntroductionChapter One: The Bare […]

Frostpunk – How to Build a Successfull City

This guide will advise players on how to build their cities, advice on laws and exploration. From the early game until the storm. ContentsIntroductionEarly Game – Getting StartedMid Game – […]