How the Syndicate and Its Four Parts Function

New league new mechanics.
This league has a lot of mechanics.
You’re going to learn them to get fat loot.

There are four sections of the Syndakit: Transportation, Fortification, Research, and Intervention.

Transport will try to protect some glowy pillars filled with souls to a portal. Timed but not usually a hurry.

Fortification will set up a fort in some part of the map, and defend it with their lives. Breaking open the door will spawn lots of enemies, can easily get swarmed watch out. Usually there are healing totems; remove those.

Research will have a dank den for you to walk into, and the Syndakit will try to destroy the intel before you get there. Either rush the leader or try to kill all the priest lookin dudes with the lazers and banners. Lots of mobs will spawn, i recommend phasing in your builds, and lots of aoe.

Intervention is just like it sounds: they’ll teleport into your map and try to take you out. Depending on how many buddies show up you could die real quick, so run away asap and kite if you’re worried about dying.

This Board is Confusing, What Does It Mean 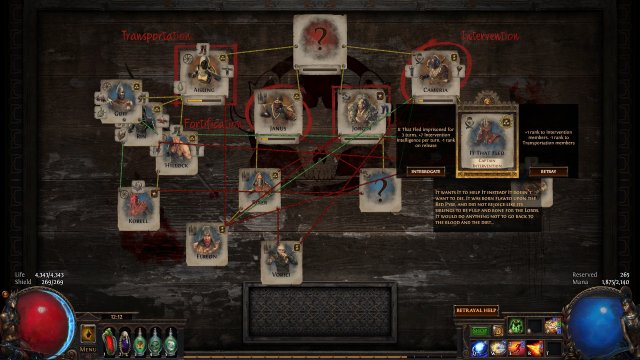 Alright let’s take a look at the board huh (press v ingame to see at any time). 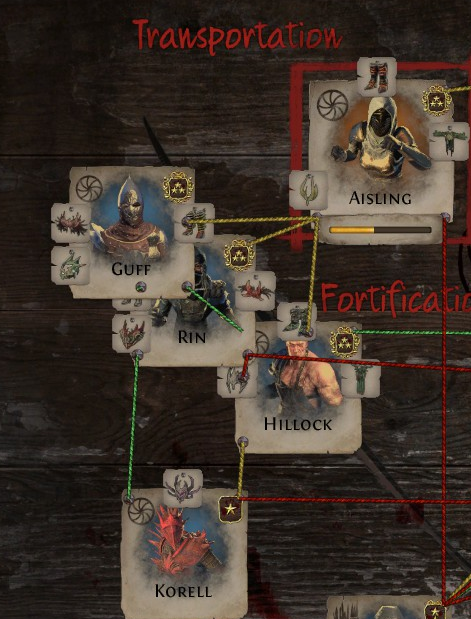 Yellow Lines means they’re in the same branch of the synokate, and will have a room in the safehouse. The max is 5 members.

Green Lines means they’re buddies with another member. Very important as they’ll show up to defend each other more often during the league events (which means more loot), and will enable betraying each other later on. This is key as it enables very very big gains of intel. Someone betraying a hideout leader will give you +40 intel.

Red Lines means they’re rivals and will try to fight each other periodically. I don’t really like it as it makes fights more confusing then they already are. Try not to have too many red lines. You can remove all rivalries within the syndokat with a bargain option sometimes.

The Intel Bar Under the Leader you need 100 intel per section, which includes the mastermind. Interrogating a rank 3 safehouse leader will give 12 intel over all, so you’ll need quite a few raids to reach the big bad.

WTF Should I Do: Interrogate, Bargain, Execute, Betray?

Members will always have the two options to pick from: interrogate or other.
The other can change depending on how many members there are down at the time.
Having 3+ will always make you kill/imprison one.
Be sure to check your options after every choice.

You always have the option to interrogate/imprison. Imprisoning does a few very key things.

+ Will always provide intel towards the safehouse/mastermind.
+ Will always derank the member -1, or if was a leader, completely.
+ Will remove the items they have.
+ In 3 turns they go free.

Everyone’s different so who you want to interrogate is up to you.

Killing a member will make them stronger and they’ll get more loot in the safehouse raids.

+ Will always +1 rank, unless they’re max.
+ Will give them an item so they get scarier.
+ Will let them give more stuff at the end.

If you like what the dude is giving, i would always make sure they’re rank 3 before the raid. It really does make the difference at the end.

I don’t know if an itemless rank 3 does the same damage as a rank 0 but its worth testing.

There’s a wide variety of events that could happen with this.
It’s better to figure them out on your own 🙂 You’ll learn as you go.
But really, if they say drop currency, unique, map, or scarab. Take it. Big drops.

+ It can do anything.
+ Get those drops man.

This is the big one. Major board changes and big intel gains.
In order for a member to betray another, they must be allies. Make everyone green lined for more chances!

+ It’s the name of the league lol. It’s important!

Walking away. If you don’t like what they’re offering, and you don’t want to remove their rank/position, just walk away.

Don’t mess your hard worked board up; no loot is the price you have to pay.

Everyone wants different loot so your opinions are your own and that’s ok (spoilers). 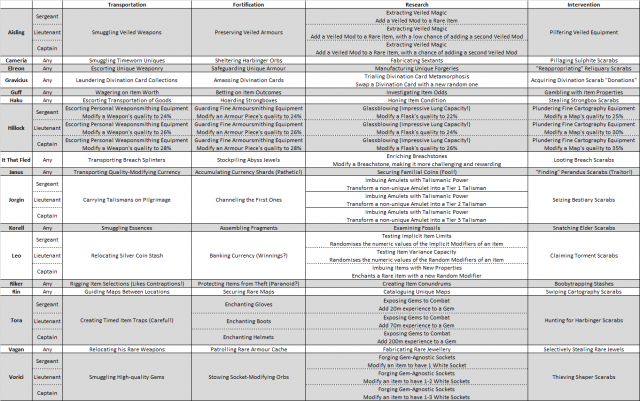 It’s difficult getting the leader to show up in the normal events so if you can upgrade them, do it for sure.

I don’t really care for the rng stuff from guff and riker but that’s just me. Guff can be really good for crafting es gear. Riker can remove some rng with uniques. Update riker is alright now.

+++ Gravycius (lots and lots of div cards, i got a fated connections (6link prophecy) here).
+++ Tora (lab enchants, need +3 rank for helmet).
+++ Hillock (overqualities armor), very important for 6 linking chances.
+++ Cameria (harbinger currency).
++ Riker gets ‘take a unique’; pick one unique out of 7 or so, 8 seconds to decide.
++ Elreon (unique armor).
++ Korell has fragments? if you can get the mortals or shaper guardian keys he’s really good then.
+ Aisling (veiled armor).
+ It that fled if you really need abyss jewels.
+ Leo is ok here, gives currency.
+ Rin is ok here, if you need rare maps for the unid challenges.
+ Jorgin gives items with a bestiary mod (aspects), pretty good.
+ Tora (lab enchants, need +3 rank for helmet).

— Vagan sucks.
— Janus sucks.
— Cameria is way better in the other 3 branches.
– Gravycius turns a div card into another? i can turn in gambler sets too. better everywhere else.
– Honestly i’m not sure what haku does here.

The rank of the intervention leader matters as it determines what kind of scarab you get (rusted, polished or gilded). I don’t know if it is supposed to be like this but that’s how it currently is. This is very important if you’re going for the use gilded scarabs challenge.

Members to Watch Out For / End of Guide

Really just be careful this league, try to get 0% chaos res. 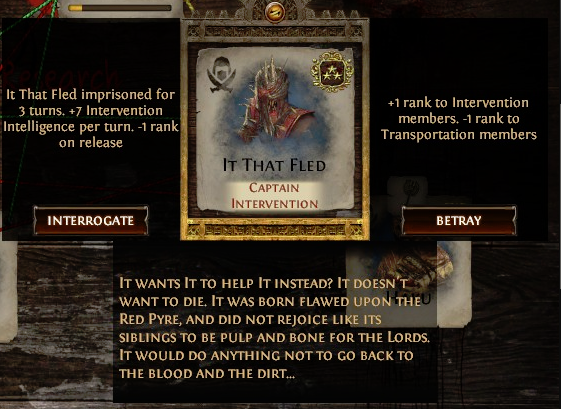 Path of Exile – How to Obtain Invested with Blood Achievement

Path of Exile – How to Make Any Builds (Beginners Guide)

Experimenting with custom builds is part of the fun of PoE, but making a successful build is a complex process. There are many issues to consider, and planning your build […]

Straight forward guide no sh*t. Simple tips to level up fast for every level range. Also including general tips. ContentsHow to Levelling FastFrom Level 1 – 30From Level 30 – […]