Get ahead of the game and see all the possible helicopter landing locations. Use it to quickly plan your success with your squad, devise a plan of entry, advantage and most importantly, plan of escape! 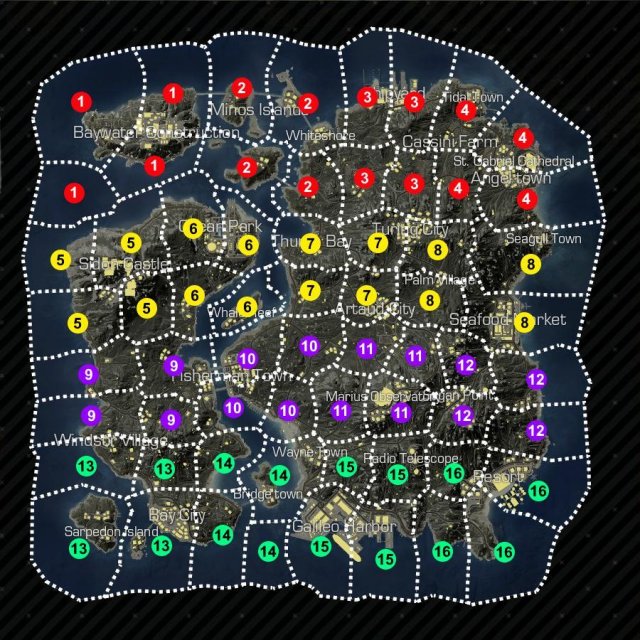 Please read this short briefing that’ll show you how to work this guide effectively and quickly for when you’re racing against time in a match.

Step 1)
It’s advised to begin this process when there is only 4 safe remaining tiles and the helicopter tile has been identified. This will give you 4 minutes and 15 seconds to prepare before the helicopter location is revealed. Using the in-game map, find the final location tile where the helicopter will land.

Step 2)
Refer to the guide, look at the large labelled map above in the ‘introduction’ section.

Step 3)
After identifying the final tile with the number on the map, use the index finder (list on right) and select the number the helicopter is landing in.

Step 4)
This’ll take you down the page to the specific details of the four tile under the number. Example: if the helicopter is landing in the very top right corner of the map, click ‘4’ on the index finder. Each number covers 4 tiles, this is to shorten the index finder. Every 16 tiles/4 numbers are given a separate colour. This is only to make it easier to find the tile you are looking for if you’re scrolling down the guide rather than using the index finder.

Step 5)
Look at the tile which the helicopter is landing on, here’ll you’ll see every possible helicopter landing zone within that tile. There is no way to know which spot where it will land beforehand. 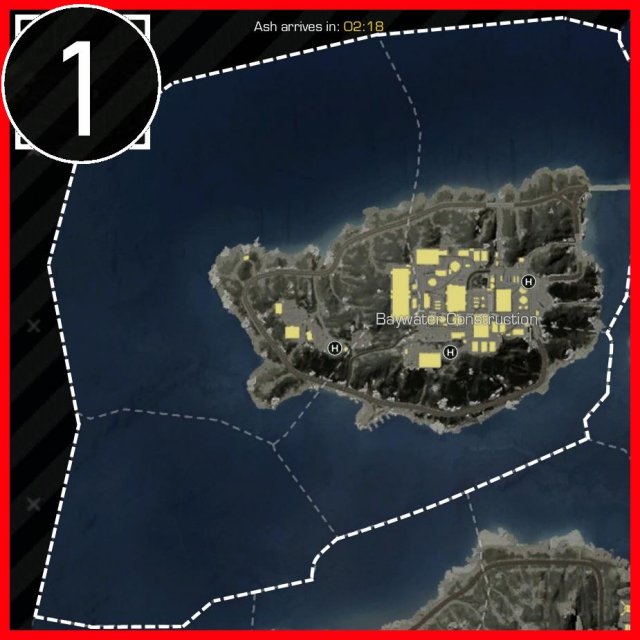 Hints: The surrounding area is mostly flat with 2-story buildings that can provide cover qhilst climbing the ladder from certain angles. The South is quite open and some people may rely on boats to get to the surrounding area. Beware of people exiting the submarine at the south of the island! 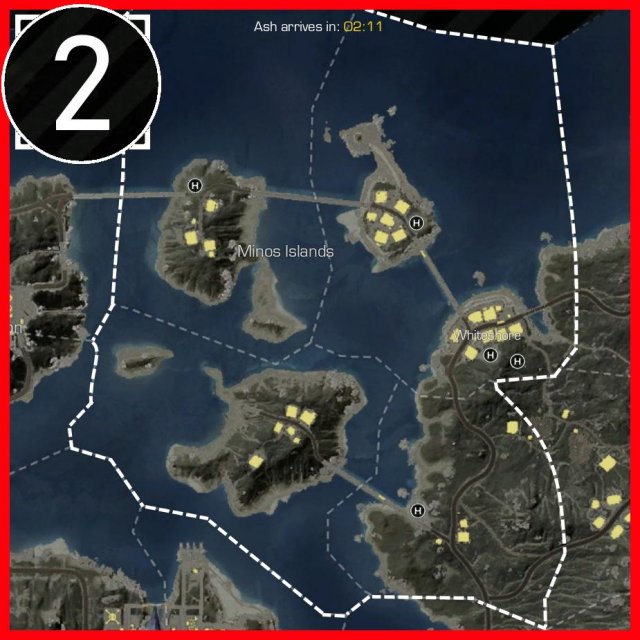 Hints: The surrounding area is most ocean, with bridges connecting the islands, boats and swimmers will be expected. The ground is open and flat making it easier for long distance weapons to spot and eliminate. 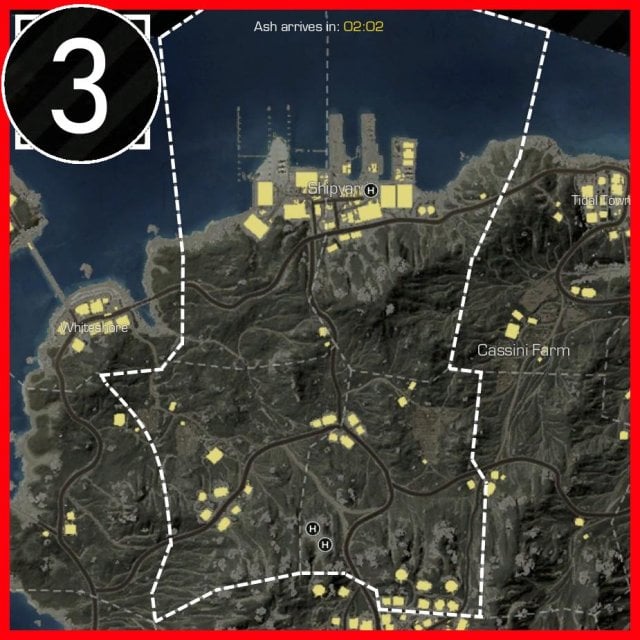 Hints: Mostly flattish farmland with straw and crops to hide in, with a few ripples of hills it’s difficult to get around undetected. The southern parts of the surrounding area is watched over by big hills from the south and east. The north-side offers protection with large buildings although it can get crowded quickly! 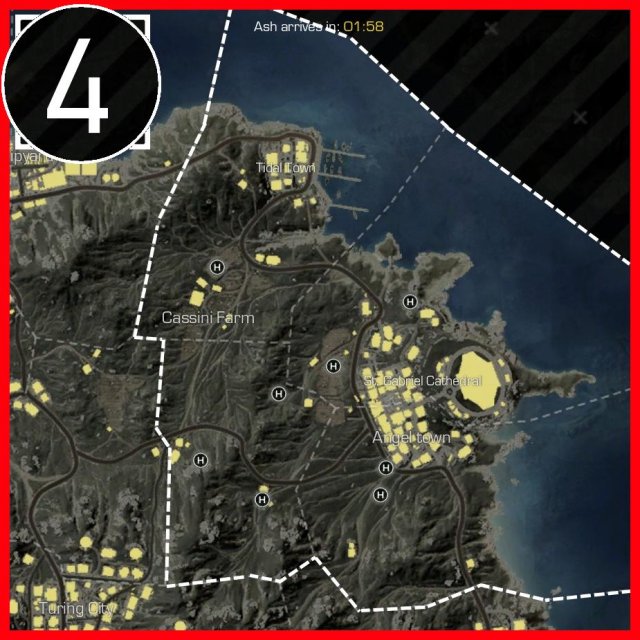 Hints: The north eastern map of the map is raised by big hills (almost mountains) that take a lot of the space besides the city. It’s a lot easier to go downhill than up but beware that the south-west of the surrounding area can get quite busy as players run to the safe areas. 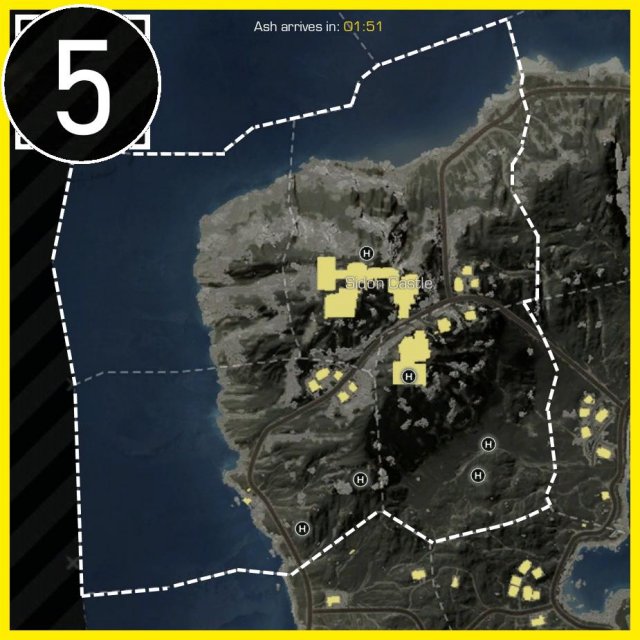 Hints: Much of this area is dominated by the mountain with the castle ruins. With steep cliffs, it can be difficult to enter from the north. The south is again, quite open making it difficult to avoid conflict. 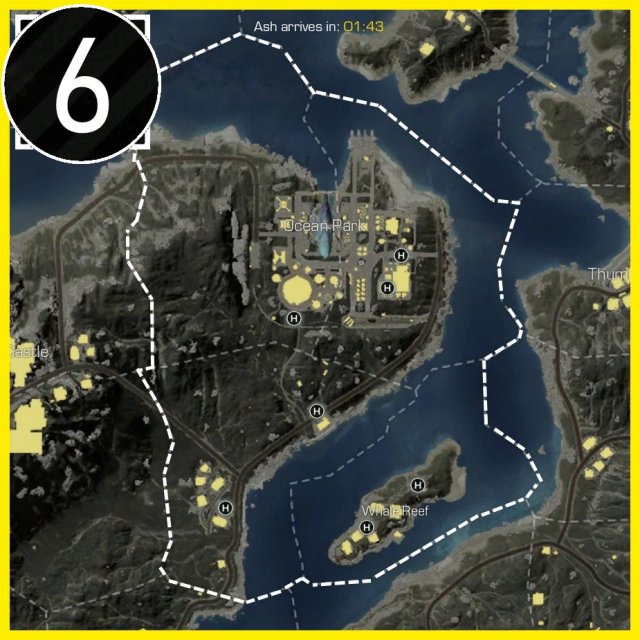 Hints: Being close to popular spawn locations, violence is almost certain, not many people are usually left alive by the time the helicopter arrives. In the Ocean Park itself, the ground is full of obstacles and cover. To get a position of advantage, try coming from the west hills of hiding high up in the park. The south side is quite open and full of boats beaching the shores. 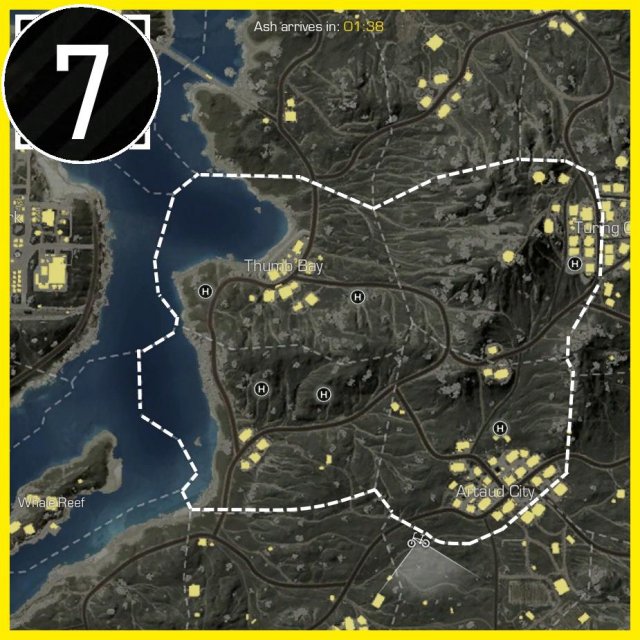 Hints: A big mountain ranges separates the north and south sides of this area which means being in the middle is a good place to quickly get tot he last zone in the area. Trees can offer some protection and the windmills are common sniper spots. Be aware, a recent patch (Early February 2019) installed ladders in some windmills that allow players to reach the very top! The east side goes into the popular city where quite a few people spawn at usually. 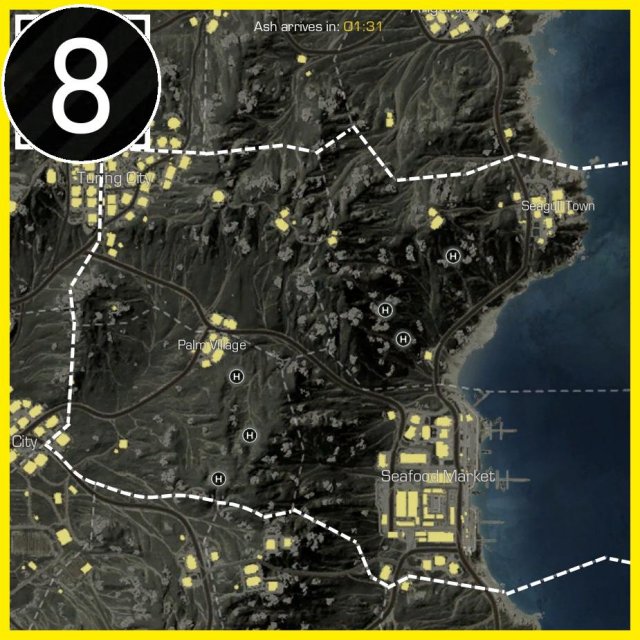 Hints: Similar to the area above, this area is separated by a mountain range, but this separates the west and east sides. With dense forests and a few buildings, cover is easy to find, but it’s also easier to walk right up to an enemy climbing a hill. 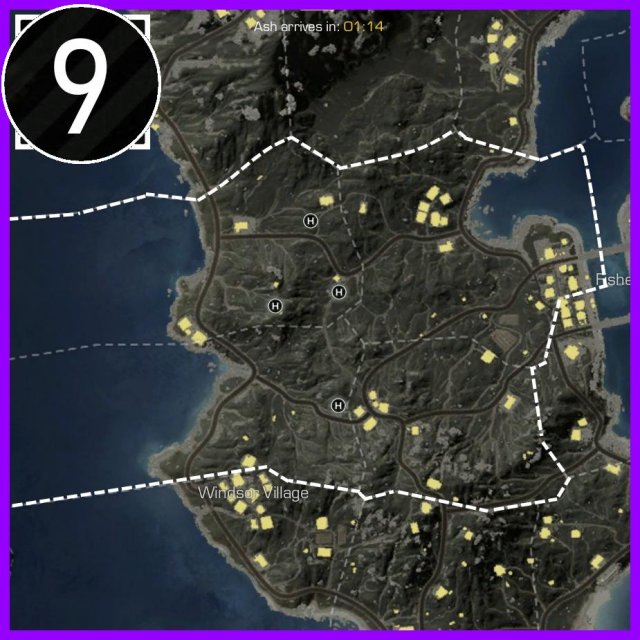 Hints: Usually quite area when it’s not the in the last few tiles of the game, the area is very open and flat. Assume there’s a sniper on every hill watching ‘No-Man’s-Land’. 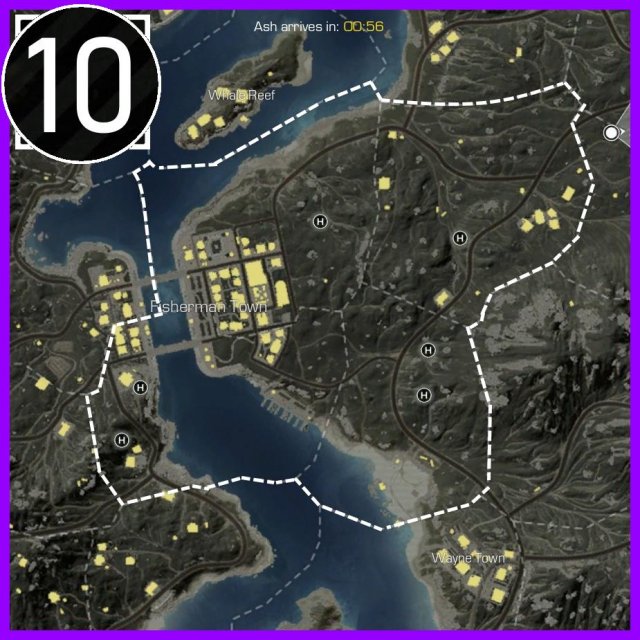 Hints: Being close the the centre of the map and featuring FisherMan Town, this place is quite bloody, and there isn’t usually many players alive by the time the helicopter arrives. The south-west side is tricky because of the river that separates potential landing zones. 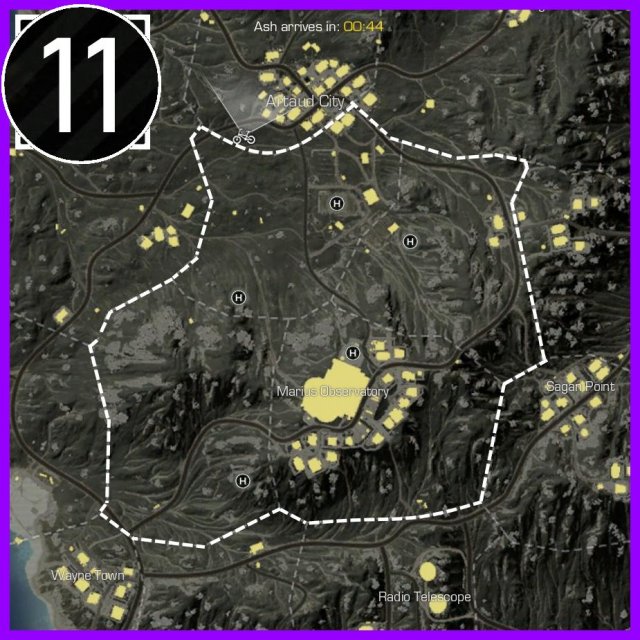 Hints: I personally find this area isn’t commonly within the last few tiles but when it is, it’s an up-hill battle for most people, literally! The City sits on top of a cliff watching over over the North, west & south sides. But players can climb ladders at the base of the observatory complex from good cover. 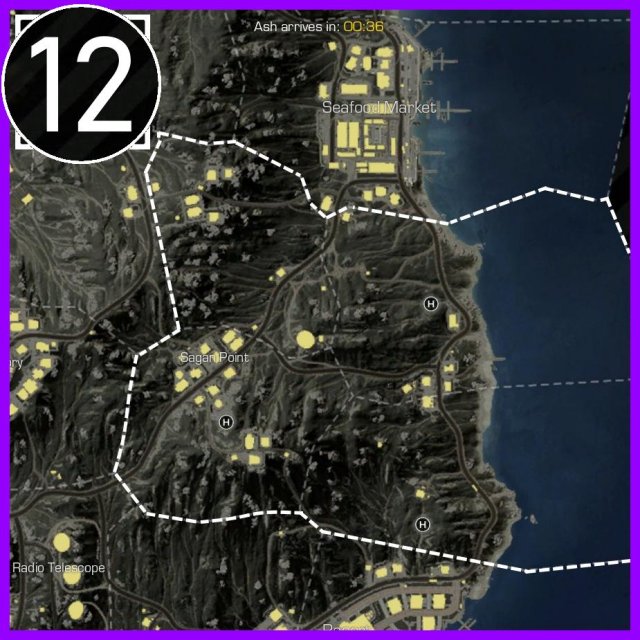 Hints: Mostly a one-sided climb as the area sits on a hill rolling down to the coast, dense with tress and cover, this area frequently has long engagements that can pass the ‘Ash Arrival’ timer. 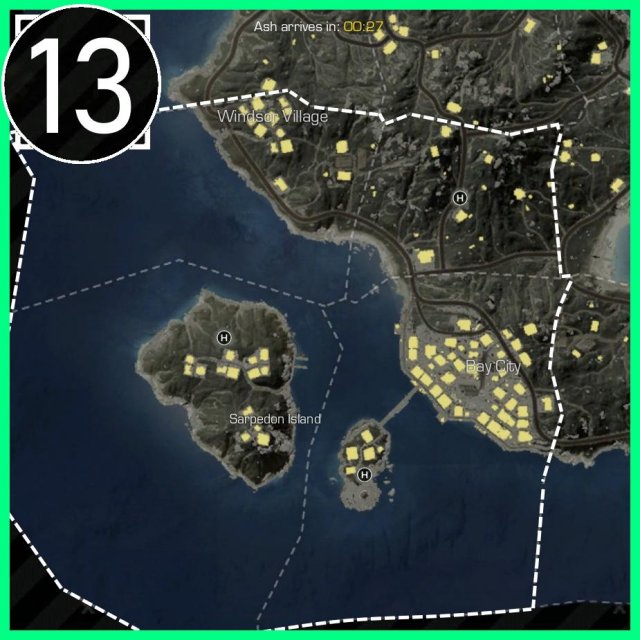 Hints: ‘District 13’, this area is reasonably open, split almost evenly between water and land. It can be tricky to move abut if the last zone is on the island in the south-west. The whole area is rather far away from the rest of the map which means a lot of people enter via boat of the bridge to the east or walk/drive down from fisherman town. The lighthouse offers protection and height if needed 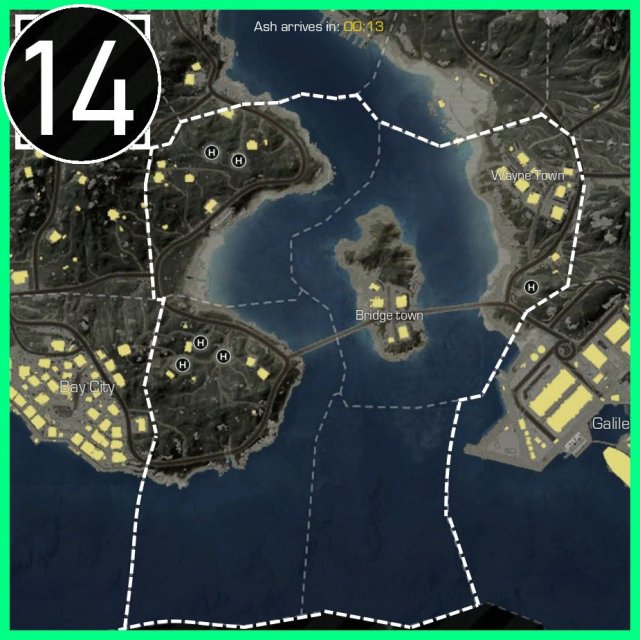 Hints: Traditional battle royale ‘bridge ambushes’ are common in this area. With most of the landing zones on the west side of this area. Boats have a lot of beaching opportunities here. 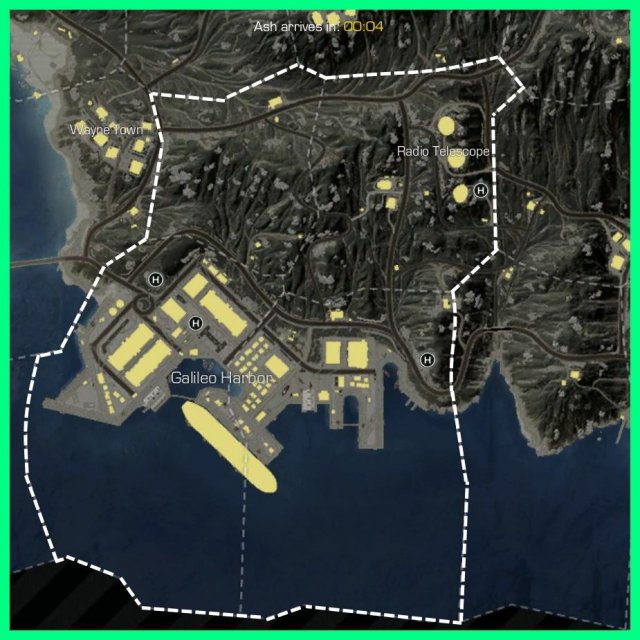 Hints: The harbour is populated with cranes, ships and buildings that offer cover and sniper positions. The north side is mostly hilly and the satellites offer good cover if you can climb inside the dishes. The potential landing zone behind the dishes are behind reasonable hill cover but snipers in the north can pick off climbers easily. 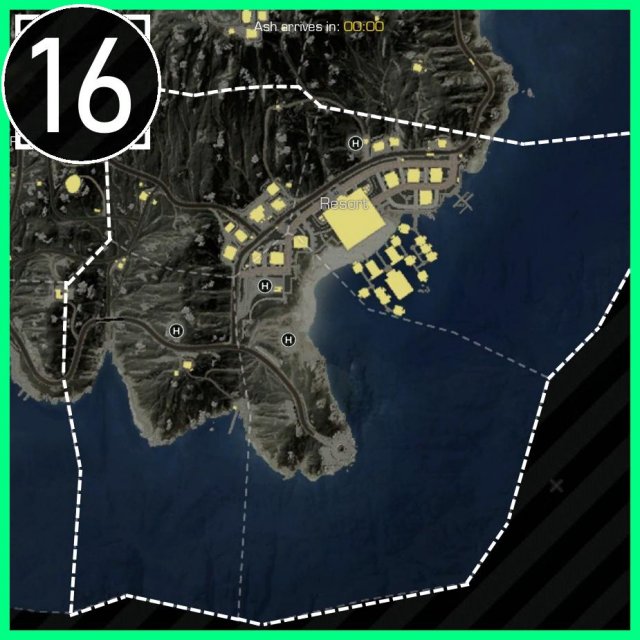 Hints: A reasonably open area with only a few tall buildings. The north side is dominated by the hills that go down to the beach. Lots of cover from all angles is trenched in well.

In this guide ill briefly go over every gun that is currently available in ROE. Other ROE Guides: Basic Beginner’s Guide. Basic Tips and Tricks. ContentsThe AttachmentsPistolsShotgunsSubmachine GunsAssault RiflesDMRs – […]

Other ROE Guides: Basic Beginner’s Guide. Weapons and Attachments Guide. Basic Tips and Tricks 1) You can switch directions on the zipline simply by pressing backwards (S) while riding; useful […]