Ever Adventure’s 2D combat takes place in real time, not unlike the classic Street Fighter series. The player’s character can move left or right and perform all the common combat actions. This is different from the traditional 2D, 3D turn-based games in that gamers are free to control the character however they want, making the outcome of the combat much more difficult to predict. Countless possibilities exist in Ever Adventure’s 1v1，3v3 and even 5v5 mode. At the same time, our game is also different from traditional ARPGs as it’s tailored for mobile gamers.

Virtual buttons in the bottom left of the screen controls forwards and backwards movement.

Double tap to dash, a good way to boost speed or dodge attacks.

Can manually tap or activate auto attack to damage your target.

Each class has its own auto attack special effect, it can also be used to start certain combos.

Keep in mind that each class has different basic attack speed, for example warrior is the slowest（cannot dual-wield, but each attack does more damage）and rogue is the fastest （dual-wields light weapon and each attack does less damage）.

Your character can equip up to 4 skills during combat.

Skills can only be cast manually, unless you are in auto-combat mode where the AI takes care of casting skills.
We recommend you research your next opponent and combat mode so that you can pick out the most suitable skills, talents and runes.

Each class’s talent branches into different skills, they can be very different from each other.
Each skill can also be slotted with runes, evolving the skill effects.

Each skill will cost varying amount of mana and have different CDs (displayed for players).
Choosing the opportune moment to cast your skills might trigger combos and other surprising effects.

You can mark targets in combat, this helps target prioritization.

At the same time, you can lock your target, in case your mark gets mixed up or canceled.
Some skills can cleanse the target lock effect, such as a defensive warrior’s taunt.

During combat, you can determine enemy number, class and casting progress by looking at the avatars.
If multiple enemies are stacked up, you can high-light your target by clicking on their avatar.

Should your enemy be working towards an AOE or such powerful spell, click their portrait and cast your disruptive skill.

The game allows players to turn on auto-combat（click the robot icon in the top right during combat).

Once toggled, the AI will assume control of your character’s movement, attack and skill casting until the end of combat. 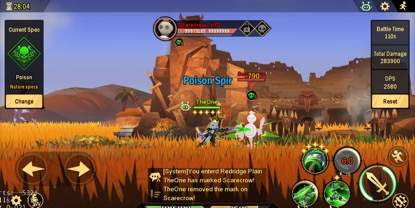 The game allows any player to bring 1 companion into battle, you can of course opt out.

The companion will fight automatically and you won’t need to control it.

Under special circumstances, such as campaign, there might be multiple companions fight alongside you.

If all members（NPC companions included）reach 0 HP, then the fight ends and victory is determined.

Players can click on the damage rank icon in the bottom of the screen to view combat damage ranking.

It will display the top 4 players, damage from NPCs are not included. 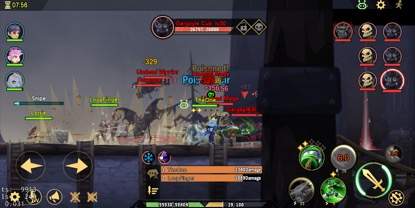 Players can manually type messages during combat, they can also communicate via quick messages and voice messages.

Quick messages are pre-set messages that players can edit and compose in Game Setting’s Chat menu.
To voice chat, simply toggle (button）it, and speak while still having both hands controlling your character. This is perfect for group fights or boss fights. 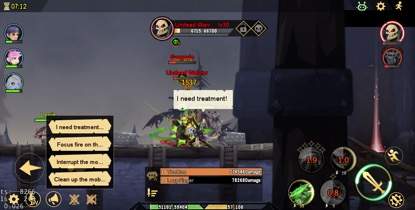