Hi, Aliturae here with another guide to help you out with aspects of the game! This time, I will be talking about Jewels and Magic Symbols!

You might be wondering what jewels are, how you can get them, and how you go about using them in your gear! Well to start off jewels are gems that come in 4 different types for almost all stats currently in the game! The 4 types are Red Squares, which focus on attack stats, Blue Triangles, for defensive stats, Green Circles, for augmentation stats, and Hexagons, that can have any of the stats. Hexagons aren’t listed in the table because one of the 2 differences between them and the other stats is that not only can they be every stat, but that they can be put into any socket! To obtain sockets you first must get 5 weapon or armor socket scrolls from the Guild Broker Shop, Field Boss Coin Exchange, or by Purchasing them with Diamonds! Weapons and Armor have 2 sockets each, and the socket type obtained after opening them is random.

Additionally Hexagons can be obtained from dismantling gear of at least Rare quality, as well as from fusing other jewels in the Jewelry option in the Growth Tab.

Why Are Hexagons Special?

So not only do Hexagons come in every stat type and fit into any socket allowing for you to fully focus on desired stats, but they also have a 30% additional stat allocation compared to other jewel types. This means a level 7 Attack Hexagon (547 Stat) will give more than a level 8 Attack Square (494 Stat), and almost as much as a level 9 Attack Square (568 Stat). All gems increase at roughly 16.5% per level, so for a Square, Triangle, or Circle to be better than a Hexagon it would need to be 2 levels higher.

Recommendations on Jewels to Use and Leveling!

First and foremost, I am a player that prioritizes damage over defense, so I will go over my own opinion and focus before going into other types. I prioritize attack jewels as my squares as they work for both pve and pvp content, penetration for triangles as it is the only offensive option for the socket, and skill attack for my circles, as the only other real option is HP and I prioritize damage over survivability. For players that want more a defensive build, then defense or pvp defense triangles, and HP circles. For Hexagons, I only use attack stat.

When leveling up jewels failures before +5 do not affect the overall jewel. However once your jewel is +5 or greater every enhance has a change to be a “Big Time Fail” which will prevent you from further enhancing it. Failed jewels still provide stat when equipped. To stop the jewel from failing you need to use adjust material which is abradants, or a jewel that is of equal or greater enhance level that has failed already. Jewels that are not Hexagons can be utilized as adjust materials for Hexagons.

My strategy for leveling up jewels is as follows: I first got the jewels of each type that I desired, which were attack, penetration, and skill attack for the socket I had on the gear I was using. I then used all jewels to enhance them up until they reached a big time fail while keeping 2 additional jewels of the stat so that I had others to work on after the current jewels in my gear became fails. I pushed my circles to +8, triangles to +9, and squares to +10 without adjust material. I found it relatively easy to get jewels to +8 and the first jewels I wanted to replace with hexagons were my circles! Once I had 10 circles of +8 or greater level (some of them didn’t fail at 8) I started to fuse all my circles together to obtain Hexagons. The reason I got 10 even though I couldn’t put 10 of them into my gear because I didn’t have 10 circle sockets was in case new gear I leveled up that became a replacement for my current gear did have circle sockets on them. Once I started to get attack Hexagons of +6 I started to reduce how many spare circles I had in equal amounts. These spare circles were not a waste as they could be utilized as adjust materials. I did the same thing for triangles, but my benchmark level was +9 instead which was harder to get. Again my reasoning being that each level above +9 became exponentially harder to get without using adjust material. Now for squares, even though my goal was to get them minimally to +10, I continue to enhance attack squares instead of fusing them! This just means that if they fail at a lower point than a jewel I currently have they become adjust material, and if they go higher than I jewel I have I swap them out. If you are prioritizing a different stat, or have few sockets of a specific type you might use other jewels to do this. For my Hexagons after +5 I never try to enhance them without an adjust material, and I consistently try to only use adjust material of an equal level because each level becomes harder to increase. I save my basic Abradants for when my Hexagons are +9 as this is a major benchmark to go up from, with advance Abradants needed starting at +10. Since I only want attack Hexagons I use all other Hexagons as material to enhance them.

By the time you reach level 7 (all symbol slots unlocked) you will most likely get at least one grade 7 symbol.

Rate of Getting Each Grade of Symbol 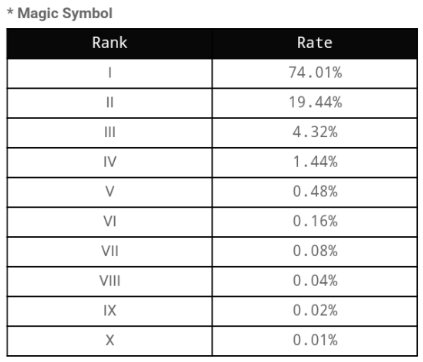 To begin with, it costs relatively little to level and roll magic symbols. As you pin additional symbols the cost increases, with a large jump at the max of 5 pinned symbols compared to just having 4 pinned. When leveling my magic symbols I didn’t pin anything below grade 6 unless it was a Sky Eagle Grade 4, or Berserker Grade 5. Even then, I never pinned my 5th magic symbol until I reached maxed level and had a satisfactory symbol to pin. This was just to maintain lower cost levels and to reach max level as soon as possible. Some people may find pinning grade 2 or 3 symbols of Attack or PvP Attack (Boss Attack if needed for bosses) to be helpful as this doesn’t increase the cost too much for the benefit received.

Once max level is reached, and you have 5 symbols you are happy to have pinned, along with a satisfactory roll of symbols unpinned save up roughly enough resources (I recommend only using symbol stones at this point especially) to roll a minimum of 30 times at once. If you find a new symbol better than a current pinned symbol do the trade, and either stop to accumulate more rolls (as you now have at least 6 good symbols worth pinning but only 5 to allocate) or keep rolling. I would recommend that you stop to accumulate more to guarantee you aren’t stuck with some bad symbols in your unpinned. My reason for 30 rolls worth is that typically you will see 1 grade 6 symbol in this time frame, as your lowest symbol increases up it would be worth saving up longer as well. My recommendations are 65 rolls if you want a grade 7, and a minimum of 100 if you are looking for a grade 8 or higher. Due to the probability factor it is almost as likely to see a grade 10 as it is to see a grade 8 in that many rolls.

I will leave any of the more defensive oriented symbols out of this list as any benefit from them comes from a personal preference and a more class based desire. Warriors and Assassin being constantly in melee may desire more defense than a Mage who can stand far from direct conflict and deal damage.

Depending on how much Pen you have and your build there is some variation in ranking of symbols with Pen on them and symbols with Skill Attack. If you are a build that has a fair amount of critical or cooldown, skill attack will be valued higher. If you are above your desired Pen amount it will lose value. One point of note is that the Pure White Unicorn is 3% better than Royal Mage even though it only has skill attack on it.

My opinion on what 6 symbols you want to look for (5 pinned, 1 unpinned) would be a combination of Aradune, Archangel, Planerin, and Dawn Aurora. From a defensive perspective Dawn Aurora has a slight bit more defense budget than Light of Regeneration has Pen, while also having a fairly large amount of PvP Attack. Even though I am more offensive in prioritizing stat, it is worth noting that some defensive stat is required to be able to perform at least 1 full rotation of skills.

Aliturae here with another guide on Talion. This one is focused on the exchange shops in the game and what is worth buying! This will be fairly text heavy, so […]