A guide for the specialised [Protector] sophon ship the “Deka”.

The Deka is a sophon Protector ship. 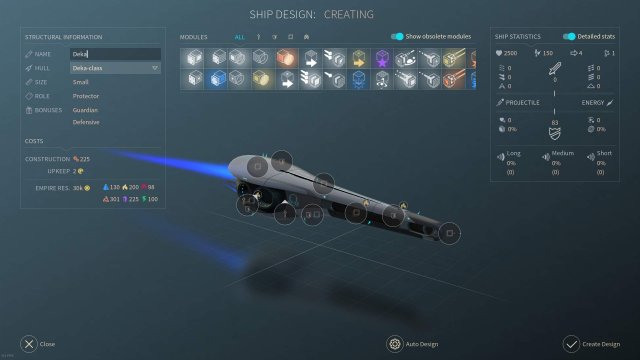 Protector ships role is to draw fire away from friendly ships and possess 10% better shields and hull plating for absorbing extra damage. Protector ships often provide a supporting role in addition with their support module slots. This particular ship is lacking in the defence department but can substitute defensive power via support modules if a defending role is required. Otherwise this ship is best suited for a unique specialised support role as it has a total of 6 support slots when fully upgraded.

6 support modules on a 1 command point ship, sold yet? (well 5 normally get used as 1 will be used for an engine if not 2 for most part of the game) Hiding these fragile ships behind a coordinator vessel is highly recommended if not then massing deka’s is also an option.

As you can see in the image above we have the following Module slots available.

We can use these support slots to build specialised ships to fill a variety of roles.

Listed below are a bunch of variants with an image of what their setup should roughly look like. 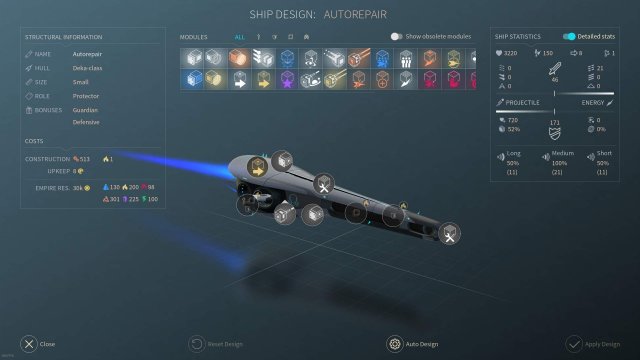 The +20 science per destroyed command point is available upon game start and will be one of your earliest deka options. Can’t go wrong with Gaining science for kills. Brought to you by the Sophon gang. 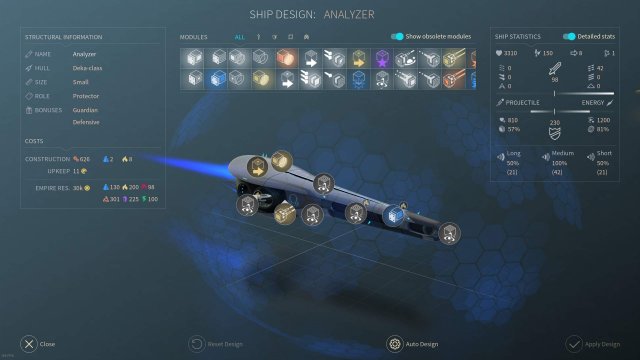 Sophon freemove module is only available via the science questline.

This ship boasts a massive 20 movepoints super early into the game even without the titanium upgrade slots. Also provides an absurd amount of vision the only thing it’s missing are probes.

Great for exploring the galaxy Also great for spying on the enemy. 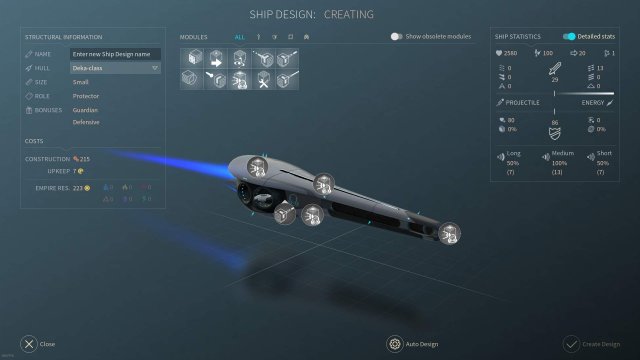 Thats per each siege unit built of course, can stack some serious sieging.

This vessel can also follow a larger fleet around and never have to see a day of combat. 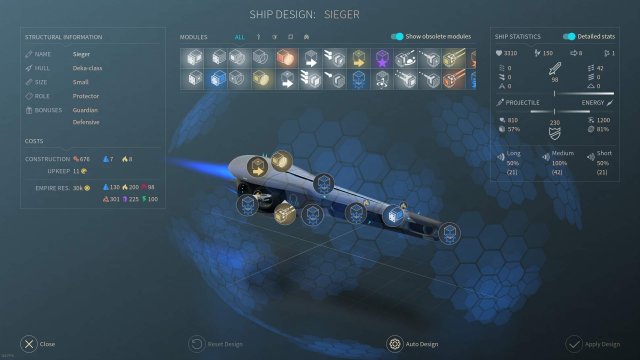 Similar to the sieger This vessel also does not need to see combat and can trail behind a larger fleet.

Dedicated dropships to transport your troops to invade systems speeds up the process and more importantly being able to deploy more troops per attack makes your ground forces a lot stronger. 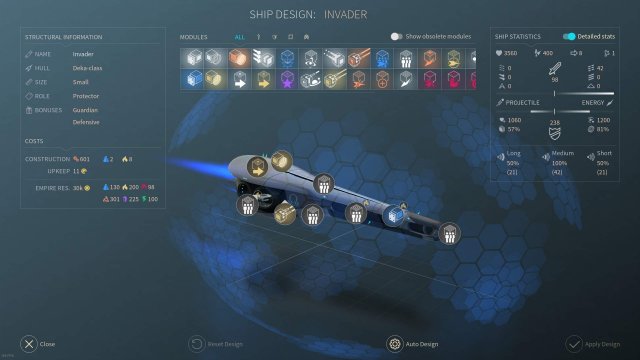 A very experimental model I must admit only working with theory here.

How many shots are fired in an up to 120 second fleet battle I’m unsure of.

To use this variant highly defensive ships must be used such as the coordinator to hide these protector class ships behind along with damage reducing tactics. The goal is to not destroy their fleet but kill off their crew whilst enduring minimal losses. If they have less manpower on fleet invading your systems will become alot harder.

If they lose their max manpower on fleet during combat their fleet will lose their +20% damage bonus from full fleet. I’m not sure if this actually works but big if true. 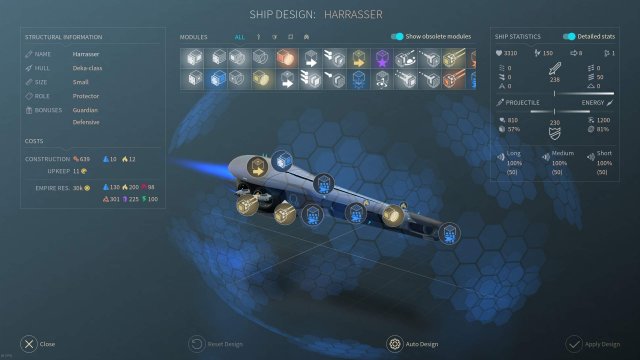 A Standard setup for being a protector.

Featuring slugs for anti missile and flotilla shields to protect itself and other ships. 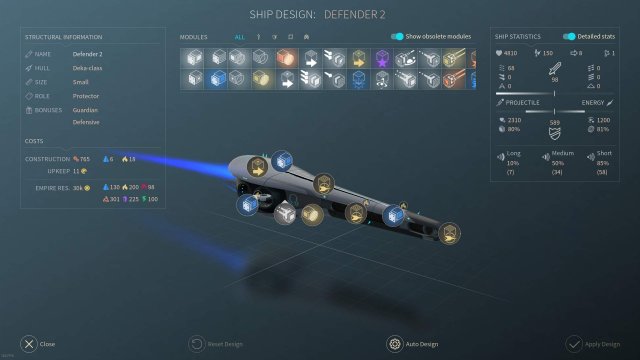 Getting rather expensive now with the strategics but If looting enemies is your thing here you go. 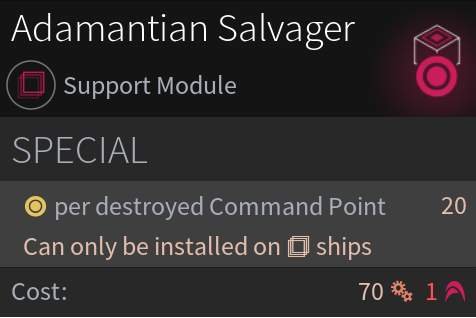 A repair rig while costing a massive 6 adamantite per module this vessel will repair your entire fleet by 25% after the battle and 25% per phase for up to 75% repair during a battle. Could combo well with a harrasser defensive setup. A very strong but costly variant. 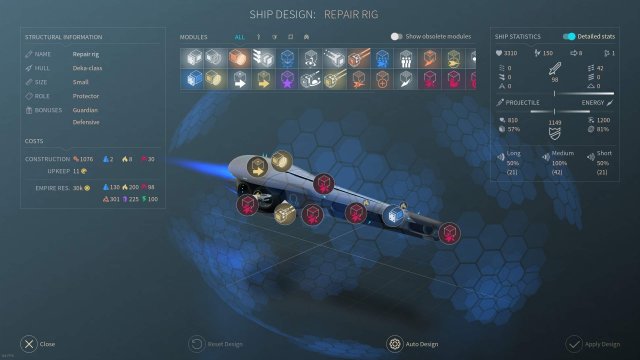 The evasive manoeuvers tactic grants +30% evasion at long range and +15% at medium range and rapidly closes the gap into short range. lasers railguns or slugs reccomended. 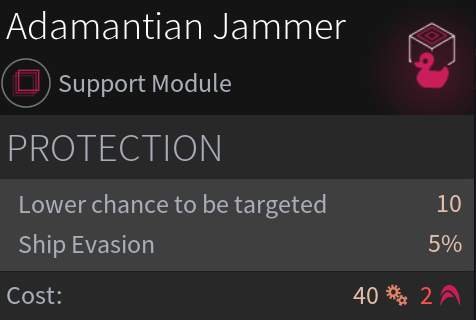 Costs super expensive orichalcix and influence is less important later in the game so render this model redundant but it’s here anyways. 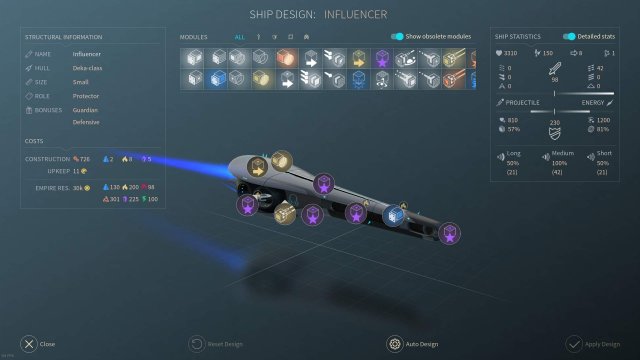 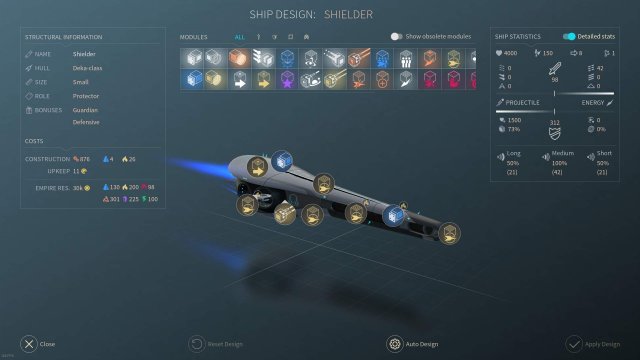 As you can see regular shielding is vastly better than a flotilla module on its own not to mention defence modules scaling on larger sized ships while support modules do not but lets give it the befit of the doubt and see what we can do.

If a raw hull plating fleet is made to counter enemy kinetic weapons it would be expected they would switch into energy based weaponry. In theory a backup fleet of these could approach to reinforce them with energy based defence.

A coordinator is recommended to be used here to guard the shielder’s and hopefully absorb up to 100% of enemy fire. as long as the flotillas coordinator(s) stay alive the rest of the fleet should survive.

The coordinator is to be fitted with full defence in mind with majority hull plating but still at least 1 energy defence module as the energy resistance gained via flotilla shield is minimal. Flak also is ideal for missile defence.

While not particularly efficient with flotilla shield scaling the coordinators should absorb all damage and provide kinetic defence while dekas provide energy defence.

Calculating how many flottila shield ships you need to maintain a healthy kinetic/energy defence balance will be needed. heres a basic coordinator for reference. 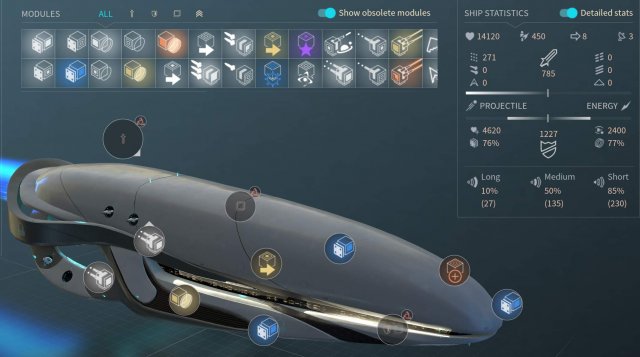 This guide will cover the ins and outs of the Cravers, both for beginners and players looking to increase the difficulty level up to Endless. ContentsFaction OverviewEarly – Mid Game […]