Play 3v3, 4v4, and 5v5 games both offline and online in FIFA’s brand-new street football mode. This page includes FIFA 20 VOLTA tips for winning matches in modes such as Kick Off, VOLTA Tour, and VOLTA League.

VOLTA is a new, small-sided mode in FIFA 20 which allows you to play street and indoor football. And it’s huge — VOLTA includes 17 unique locations, extensive customization options, and a variety of modes for you to get involved with. 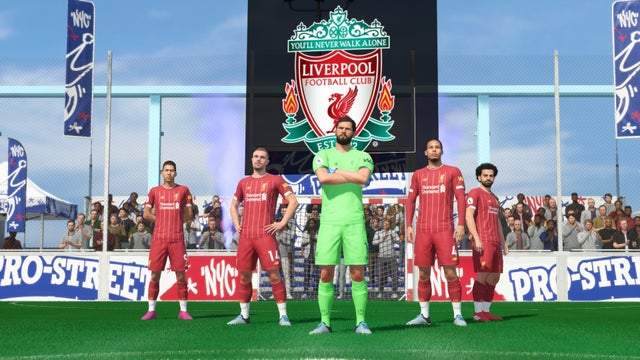 The four VOLTA modes in FIFA 20 are as follows:

All of these modes include the ability to play 3v3, 4v4, and 5v5 games. Some of these are split into Rush formats, in which there’s no dedicated goalkeeper, while 5v5 features a Futsal variant, allowing you to play indoor games with specific rules.

Keep It Simple To Win Games 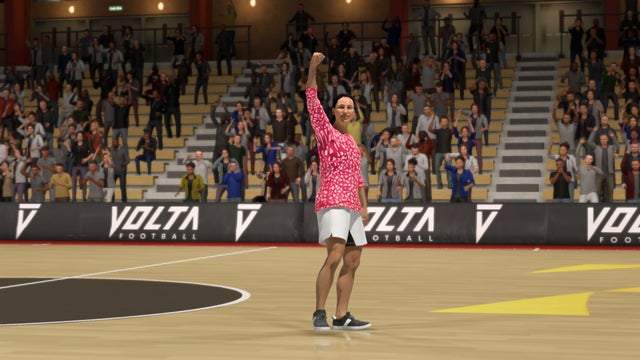 VOLTA brings back memories of the FIFA Street games of old, which prioritised flashy tricks and over-the-top goals. But this isn’t FIFA Street — it’s a more grounded take on the small-sided game, and as such, you need to play a more realistic style of football to succeed.

You can still perform amazing skill moves by holding the right and left triggers while moving your player, but they’re not as important as they used to be. Instead, focus on simply doing the basics — passing into space and playing intelligent defense — and you’ll find yourself winning plenty of games.

Use The Walls To Your Advantage 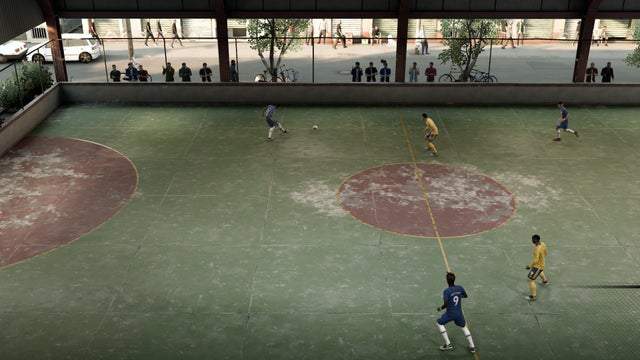 In matches where walls are present, you can make use of them in highly creative ways. Try passing off the wall to bypass defenders, for example, or simply launch the ball off it to make an important clearance.

The walls are a great way of fooling online players in VOLTA League, who usually anticipate more direct passes. Try bouncing the ball off the nearest wall to confuse the opposition, and you may just lure them into a poorly-timed tackle, leading to a goalscoring opportunity.

Work On Your Shooting Accuracy 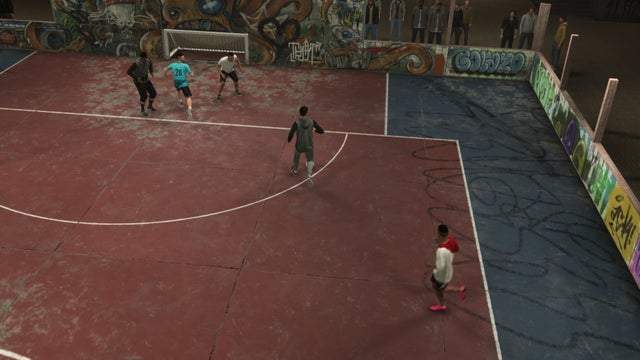 While FIFA 20’s 11v11 gameplay typically offers plenty of assistance with shooting, the same can’t be said of VOLTA. To score goals, you’ll need to master its unique manual style of taking shots.

This means shooting is less about power, and more about your accuracy with the left-stick. You need to aim in the exact direction you intend to shoot, or the ball will miss the goal entirely.

If you need practice, try switching FIFA 20’s shot assistance controls to Manual or Semi. Get used to aiming your shots more accurately, and you’ll find yourself scoring more goals in VOLTA as a result.

Avoid Rushing Out Of Position 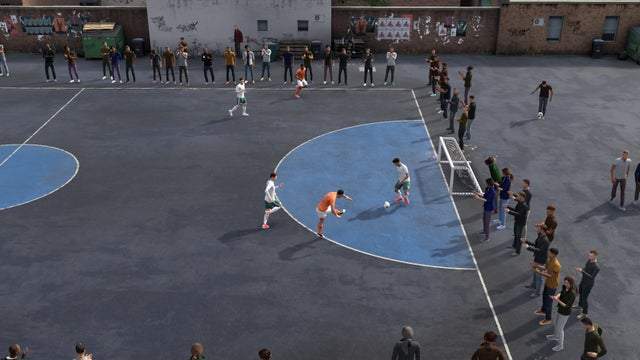 As there are so few players on each team in VOLTA, managing their positioning is key. Dragging players out of position often leads to clear-cut opportunities, and therefore plenty of conceded goals.

This is particularly important when playing with Rush keepers, as you always need someone protecting the net. The best way to monitor your players’ positioning is to identify team tactics ahead of each match, and take note of which position each player is playing.

How To Improve Your VOLTA Team 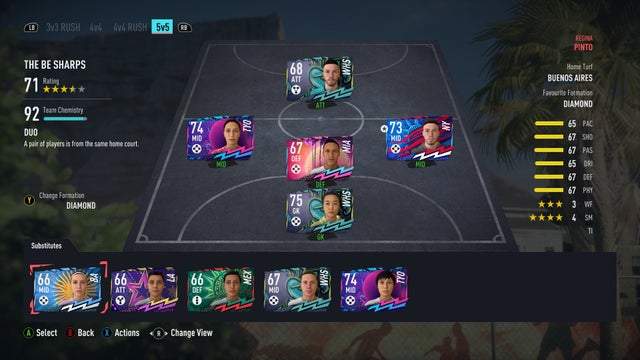 While not as in-depth as in FIFA Ultimate Team, you’ll still want to keep an eye on Team Chemistry in VOLTA. Your squad’s Chemistry has an effect on how well they perform, and can be enhanced in a few simple ways.

The best way to boost it is by simply playing your team members in their assigned positions. You can also improve it further by accommodating players’ favorite formations, giving you a slight edge on the pitch. 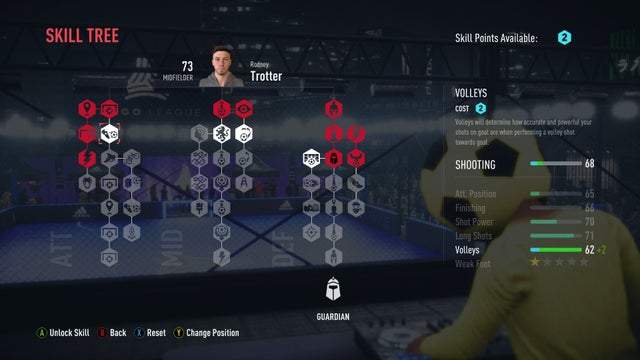 Your created player benefits from attribute upgrades every time they complete a game in VOLTA, but any Skill Points they earn need to be applied manually. This can be done via the Skill Tree section in the menu.

The Skill Tree allows you to customise how your player develops over time. Want them to be a prolific finisher, pacey midfielder, or perhaps a defensive powerhouse? Apply your Skill Points accordingly.

Recruit Players When You Win 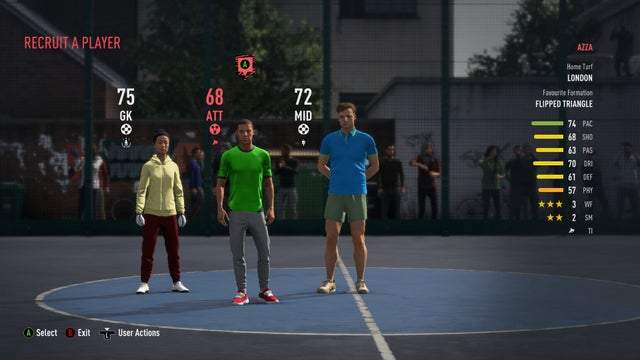 When you win a game in VOLTA Football, you’re typically offered the chance to recruit a player (a copy of someone from the opposing side) for your team.

Naturally, it’s best to opt for players with the best ratings, as their stats can’t improve over time. Their customisation features also don’t carry over, so you’ll need to apply vanity options manually.

And when you lose, don’t worry — you still get to keep your own players. You might, however, come across a clone of your created character in the future! 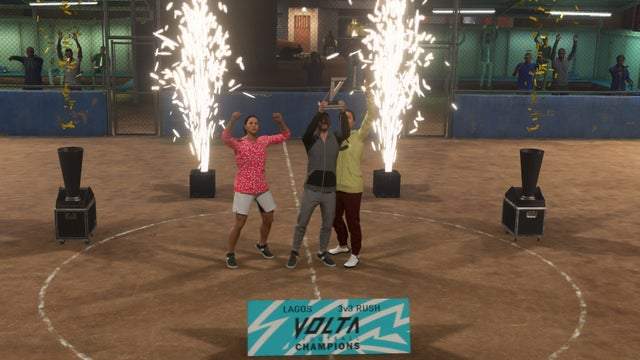 You get a few hundred coins for winning games in VOLTA Tour and VOLTA League, allowing you to acquire new items in the Shop. To earn thousands of VOLTA Coins at once, however, you’ll need to start winning some tournaments.

In VOLTA Tour, this means completing the multi-stage tournaments at a difficulty level of your choosing. In the online-based VOLTA League, you’ll need to acquire enough points to earn promotion to a higher division.

Who are the best players in FIFA 20? This guide will include information about various statistics in the game. FIFA 20 Guides: Tips and Tricks. VOLTA Guide (Tips and Tricks). […]