This guide explains how to obtain some achievement. For example: I’m a King and a detective and The one I love.

This guide is dedicated towards the developers and staff members who work hard at the Steam forums. I somewhat got encouraged to write this by seeing the first guide is by TinyPixxels. Thank you for your hard work.

This guide does not cover explanations or walkthroughs for all achievements. My reasoning is that most achievements get activated by default simply by playing, while others are sufficiently explained in the achievements listing of the game.

I picked this title, since I consider this certain achievement – “I’m a King and a detective!” – is hardest to get. After that I throw in some extras. So do not expect too much this time around!

I am wishing you fun and joy with the game – and success in getting all achievements! 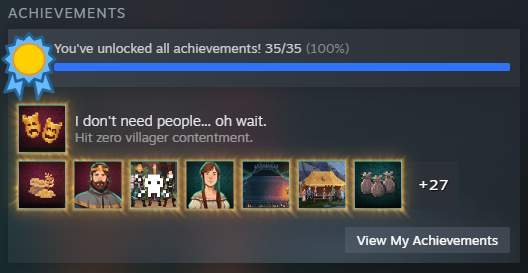 I’m a King and a Detective!

To obtain this achievement, you have to “Find all evidence and clues for Royal Trial.”

While finding the clues might be simple, finding the ones you have to ask – suspects and experts – can be a little of a hassle. You need to follow the leads and hints carefully and thoroughly. To be straightforward towards you: I came across all suspects by mere chance.

There are three items which will be needed for the achievement and come in use for the Royal Trial.

Finding the tooth is the easiest. Questioning the witnesses will lead you straight to the dungeon master who will hand over to you the very first evidence. 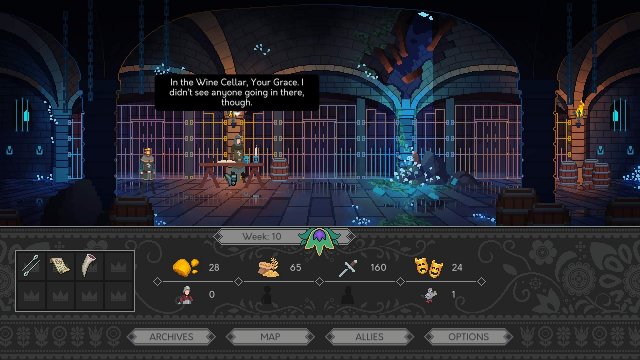 Lady Lena will be able to tell you more about the possible meaning of that item. Afterwards you need to wait a little before you can seek help of the hunter (1W), who will join you as the story progresses. 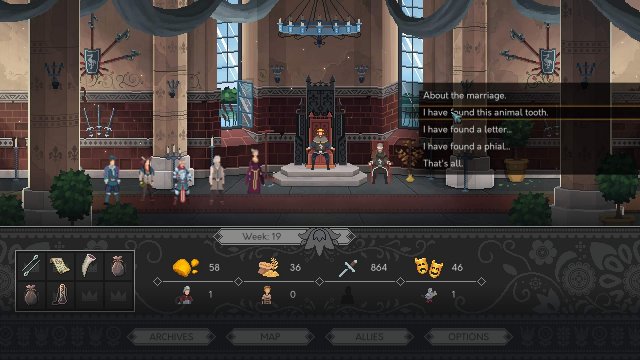 Have you noticed the crack in the garden? Someone abused it as a secret stash. Time to find out what lies below. 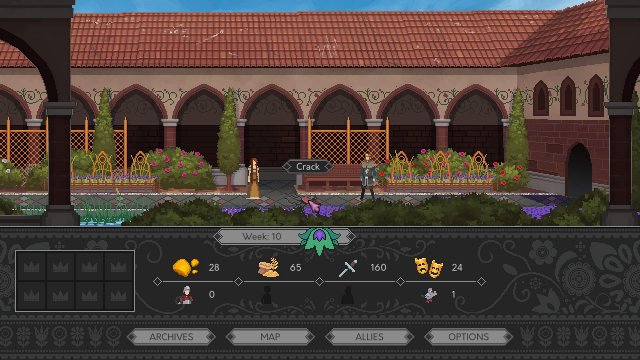 For that matter you need something thin, but not as large as a sword. Thankfully, Aurelea loves to knit. Her needles will come in handy for two achievements. You can “borrow” them from the Bed Chamber. 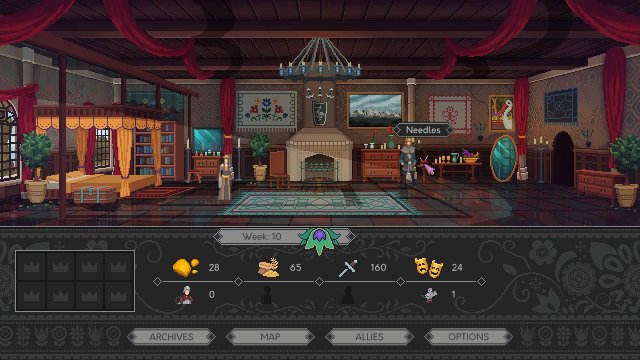 After retrieving the letter we can ask the general to ask around (2W). The ornaments used gives us the needed hint, that the art acquirer Grego can tell us more about the possible origin of the letter. 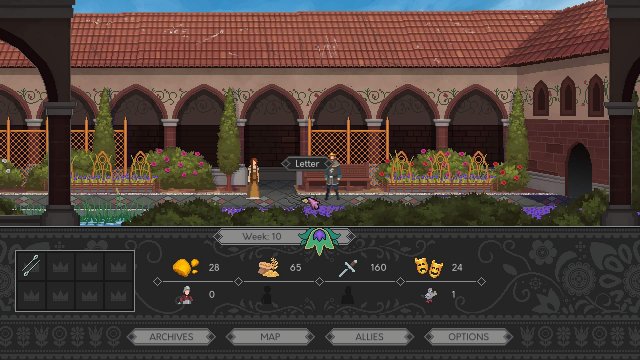 A lot of people with the forums keep asking about where and how to find the phial. I was pretty sure it cannot be missed, but for completion matter here is the guidance – starting with the message you get on the 17 week. 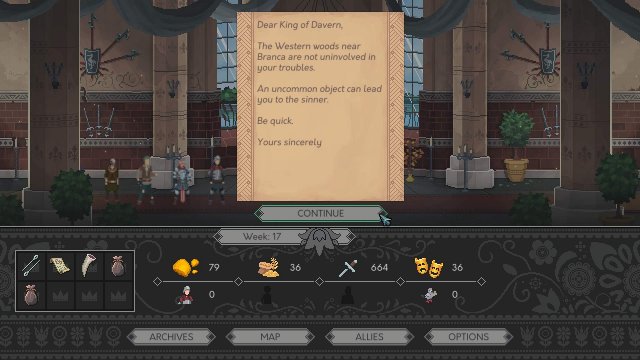 The message triggers a new location, which is according to the message not lasting for long. Worry not for not having your general ready in time! At the same day the witch will join your ranks, making it unmissable to fetch the phial in time! 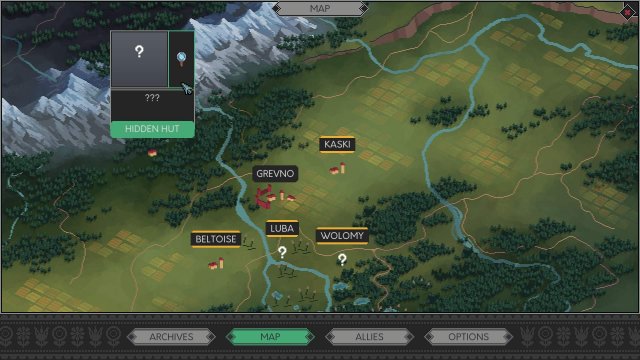 The witch is also the one to seek out for the expert clue. Last but not least it happens that Lurs recognises the phial to be used to store Oracle Dust. All the evidence are pretty clever pointed towards the suspects at the Royal Trial. 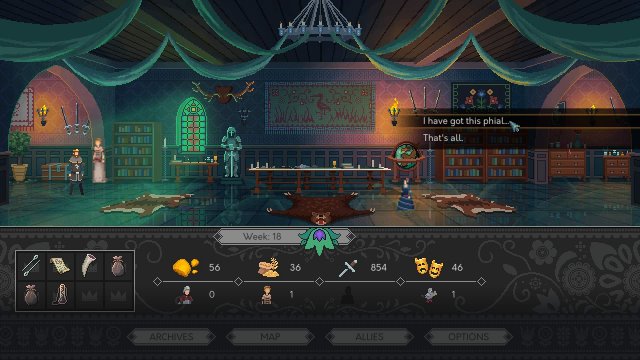 To sum things up, here once more the details by the experts and hint givers. 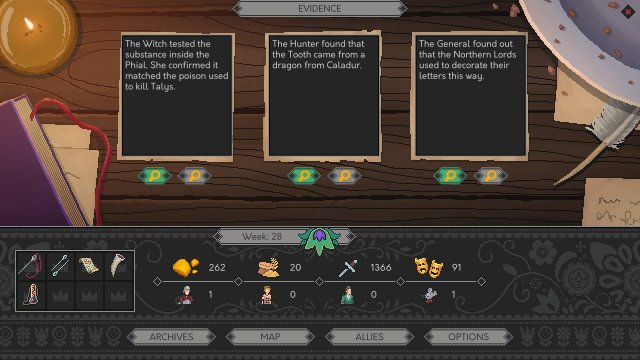 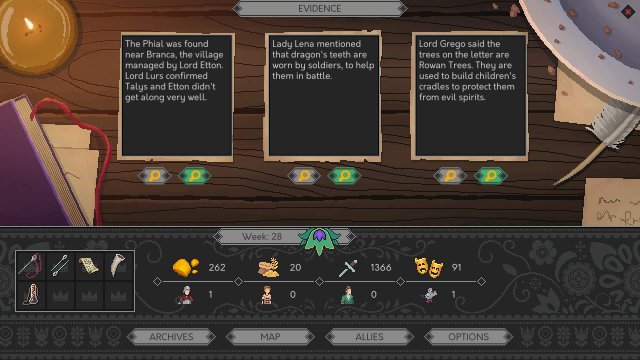 With all evidence and clues gathered you can shout out “I’m a King and a detective!” at the Royal Trial!

What now follows are a few additional extras. Some tips and hints about achievements which might be not so obvious. Enjoy!

The One I Love

The biggest difficulty about this one is – it is completely optional and it happened that at first I forgot about the gift at the same week (23), until the nightly session started to happen. It is quite a tricky one, since you cannot buy the gift but need to be creative about it. 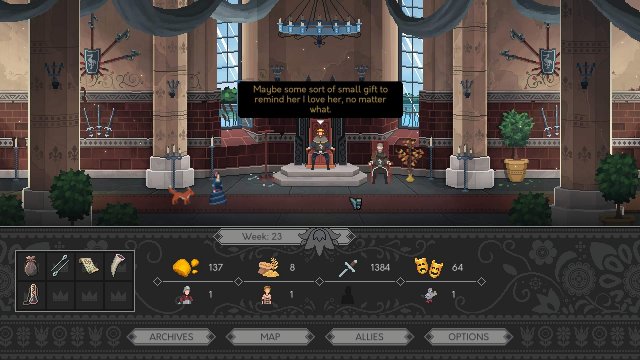 First, you need the needle which was also used to uncover the crack in the garden. Then you grab the ball of wool in the Council Room. 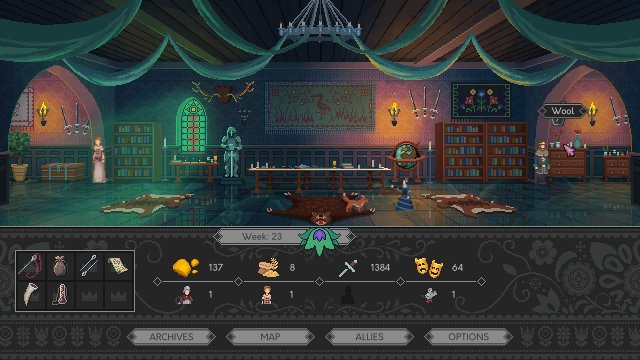 Combine the needle with the wool. The last “ingredient” for the gift can be found at the castle gate. Together with the old fabric you create a simple knitting of the King & Queen with a heart between them. Cute. 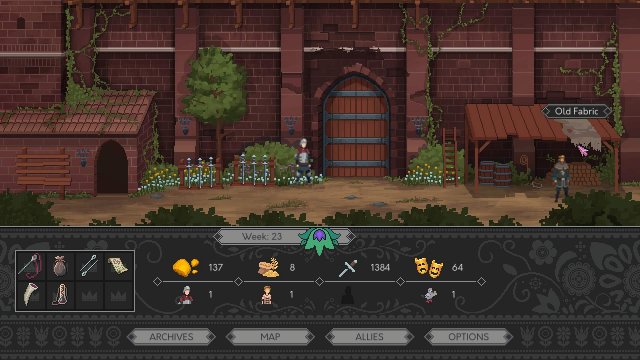 Important note: currently with the version 1.0.3 of the game, the achievement is unobtainable.

To give this guide a finishing – here are some less obvious hidden achievements.

Yes, Your Grace – How to Get the Perfect Ending / Family Matters Achievement

There are several different endings available in Yes, Your Grace. Here is how to get, arguably, most perfect ending possible! ContentsThe PlanMiddle DaughterYoungest DaughterThe QueenThe Rest The Plan Here is […]

Yes, Your Grace – How to Expand Resource Base (Monetary Tips)

The purpose of this guide is to provide monetary tips without spoiling any of the major plotlines. I’ll start with an Economics 101 crash course and then review a few […]

A detailed guide on how to get the Mad King achievement. ContentsHow to Obtain Mad King AchievementOverview1 – Kill the Deserter in the Prologue2 – Kill the Radovian Bandit3 – […]