In this guide I will cover:
How to Distribute Stat Points on Your Troops, Tanking Strategy, Focus Fire, Skills That I Like and Use a Lot.

How to Distribute Stat Points on Your Troops

Stat Points are received when you level up, like skill points. But stat points are a bit more vague on what they do. There is a description for each of the four stats, but it is unclear how much they actually affect the character. Here are their names and descriptions.

Strength controls how much damage the character deals with close-combat weapons, like swords and maces. It also improves the effectiveness of some skills. Strength also increases Cause Stun + Stun Evasion

Dexterity controls how much damage the character deals with long-range weapons, like bows and crossbows, and also contributes to finesse weapons like daggers. It also improves the effectiveness of some skills. Dexterity also increases Accuracy + Evasion

Endurance controls the maximum health of the character. A higher endurance allows more hits before falling in battle. It also improves the effectiveness of some skills. Endurance also increases Health after battle + Wound resistance.

Intellect controls how much damage the character deals with magic weapons, like staves and wands. It also improves the effectiveness of many skills. Intellect also increases Chance free skill use + Power after battle.

This is how I recomend the stats to be dispersed.

If you like your troops to have matching stats, then this tactic isn’t for you. Tanking is a strategy that specializes your troops, one guy is really good at taking a beating, there are a few healers, a few damage dealers, and one well-rounded team. So, how do you pull this off? Well, you have to consider what each of the classes are good at. Warriors are the damage sponge, clerics are the emergency healers, rangers are the long term healers, and the damage dealers are the mages. The warriors have a skill called ShieldWall, this skill demands enemy attention, meaning they can’t directly attack anyone else. Make sure that the warriors default fighting style is adrenalin, adrenalin prevents the character from being stunned, which will remove the skill, also, don’t use any other skills while it is active, it will remove the skill, and don’t attack with the warrior for the same reason.

As soon as the skill is active use the ranger skill Natures Balm, and change the cleric’s fighting style to radiance if you have it. Then you heal the warrior as needed.

Note: this tactic is only worth it if there are more than three enemies. 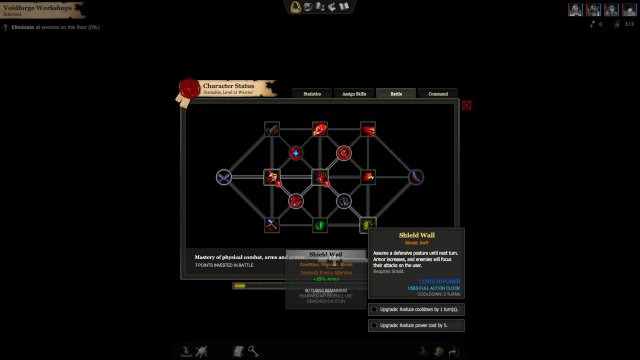 Also try to focus all of your attacks on one foe, preferably the weakest one you can attack, this can help a lot because if they go down faster there are less things to worry about.

Ok this is a list of skills by class that I use with great regularity.
You can get Most (if not all) of these skills before your character reaches level 5.

A look at the nature tree. Explains the uses of skills in the tree, as well as describing the ins and outs of how it functions. Other MDG Guides: Fighting […]