A look at the nature tree. Explains the uses of skills in the tree, as well as describing the ins and outs of how it functions. 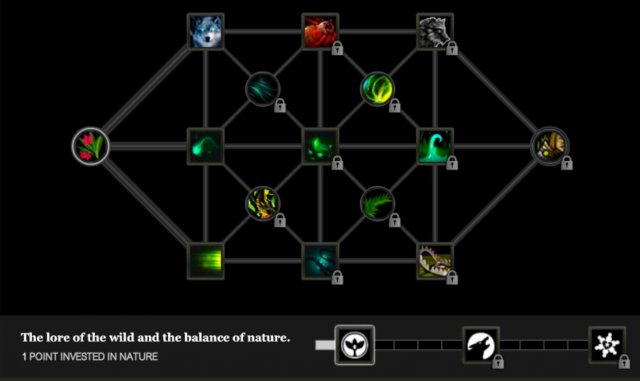 Summons a friendly wolf to an empty space on your side of the battlefield. The wolf can growl to debuff enemies and remove a bit of their action, and it can also pounce targets infront of it dealing extra damage. Very strong skill. The wolf has very high damage and very high health. Additionally the ability to pounce the backline can be absolutely devastating. The growl ability won’t be used very often.

Summons a firendly bear to an empty space on your side of the battlefield. The bear can charge the backline when there is an empty space directly infront of the bear, and it can performa quick attack that deals reduced damage. Generally superior to the normal wolf but inferior to the dire wolf. The charge ability is not as good as the pounce ability that the wolf has, however you might be able to get more use out of swipe than growl.

A superior version of the normal wolf that costs slightly more to summon. Once you get this there’s no real reaosn to use the normal wolf anymore. For medium length fights you’ll normally want to summon direwolf then follow up with a bear. In very long fights it’s normally best to wait until you can summon two dire wolves.

Greatly increases the targets health regeneration as well as giving them immunity to poison. A very strong skill that will heal for a huge amount over a few turns. The only downside is the delay on the initial heal. Sometimes you’ll find yourself in a situation where you need a heal asap and by the time nature’s balm works it’ll be too late. Regardless this is a great skill, you just need to use it on time, not when someone’s already on deaths door. Additionally it can be used to purge poisons which is a great added upside.

Heals for a reduced amount as well as removing wound conditions from the target. This skill is largely inferior to the “Heal” skill available in the divine tree. It serves mostly to provide a direct heal when it’s needed to save a party member who would most likely be dead before nature’s balm could take effect.

Resurrects a fallen ally with low health, and a natures balm condition. In many cases second wind is inferior to the resurrect available from the divine tree. This is because often times, since allies resurrected with second wind start with low health and an empty action clock, they’ll simply get killed again before the nature’s balm condition has a chance to kick in. When they are able to take a turn before getting taken down again however, this is a great skill. The mana cost is hefty but the effect is definitely worth it. Strongly consider picking this up on anyone with the nature tree regardless of their build because having back up resurrects is always a good idea.

Increases the target’s speed by 15, half action. This ability is much stronger than it seems at first sight, 15 quickness is a very large amount. Swiftness is best suited as a filler action for non damage dealing nature users who have already performed all of their important actions. You’ll most likely find yourself using this on the hermit as opposed to the ranger as a result. Swiftness allows supporting characters without much damage potential themselves to provide supporting damage by increasing the damage output of major damage dealers in the party.

Provides retalition damage to one rank of the party based on level tier, half action. Another option for providing extra damage as a supporting character. Most useful against high evasion, high speed, and high armor enemies. This is because retaliation damage cannot be evaded or resisted, and it does more damage depending on how often enemies attack. Whether you want to apply swiftness first, or apply thorns depends largely on the effectiveness of your damage dealers, and the enemy team composition. Thorns becomes less useful the more well geared your party is because of the scaling method, unlike swiftness.

Set’s a trap that causes enemies attacking effected allies to have a 50% chance of being stunned, half action. Unfortunately this ability isn’t nearly as useful as it sounds. Often times when this does land a stun it’s against a target that doesn’t need to be stunned. Additionally against many high priority targets such as healers and conjurers this simply won’t work. The final issue with snare is that since it only has a 50% chance to stun, enemies that have even a little bit of stun resistance have a tendency to simply ignore it.

Call of the Wild

Gives full starting action and reduces the cost of summons in half while outdoors. An okay passive when it’s active, but unfortunately most of the time this will be useless. Don’t worry about picking this up until all of your other, more important, abilities have been skilled up.

Reduces the cost of all of the users skill by 5 while they have an animal companion on the field. Not a game changer but decent for helping with power management. Most of the time this will be active so you can, for the most part, just treat it as a constant static skill cost reduction.

Grants +40 evasion while standing on a tile with a terrain condition. The evasion bonus from this skill is very significant and often means you should prioritize beneficial tiles for your nature user. Greatly increases the durability of the user, making it a strong enough skill to prioritize over most other passives and skill upgrades.

At the start of each battle one random friendly tile is given the healing herbs terrain condition causing it to give extra healing received, healing done, and health regeneration. Cannot cause multiple terrain conditions on a single tile. By itself this a decent ability that can sometimes provide a small extra bonus to the a single team member. This can also however help you use camouflage more reliably because of the increase herb lore provides to positive terrain conditions available.

Reduces the cost of nature’s balm as well as increasing healing done and health regeneration. Scales with level tier. The bonuses provided by healing lore help to increase the survivability of the user, give a little bit of help with power management, and increase the effectiveness of herbal remedy. The health regen is the primary selling point of using healing lore because of the large amount of regen given by it. Additionally it can help put herbal remedy closer to being on par with the divine tree’s heal. Useful as a default stance if nothing stronger is available.

Grants armor piercing, a sizable amount of magic resistance, and causes attacks to purge buffs from enemies. You’ll use this mostly for the on hit purge that it provides. Very strong at circumventing enemies who are demanding attention, as well as enemies with very powerful buffs that need to be taken care of such as the arachnoid incubators. Note that this will only work if the attack damages or afflicts the target, meaning this is often times not going to be able to purge an absorption ability from an enemy. The extra magic resistance and armor piercing are mostly just bonuses added ontop of the primary ability of force of nature.

Gives a minor buff to armor, as well as a massive buff to cold and flame resistance. Unfortunately for being the final stance available in the tree, this is painfully underwhelming. Sadly you’ll rarely ever use this because the bonus provided just isn’t that good most of the time. The armor buff is very small compared to other fighting styles like arcane armor, and resistance to two random damage types isn’t that useful. Perhaps if this gave 50% resist to all non weapon attack types this would be more useful, but in it’s current state it’s just too underwhelming.

A powerful buff that provides a large buff to damage, armor, health regen, power regen, and enemy attention to a wild companion summoned by the user. Can only be active on one unit at a time. A very strong buff to your summoned animal that greatly improves it on all fronts. Often you’ll use this between your first and second summon to occupy the cooldown turn. Much more helpful for dedicated supports than for hybrid damage based builds. 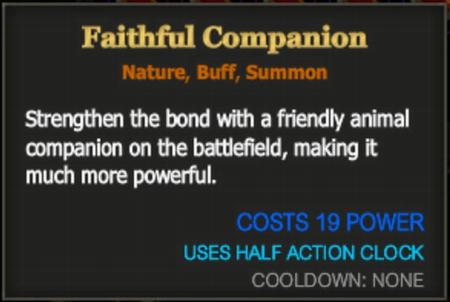 Deals flame damage to the target and applies a damage over time effect that has a chance to reapply to enemies adjacent to the flaming enemy each time it deals damage. The spread wildfire effects can also spread. This is the only direct damage ability available to the nature tree, and it’s a rather interesting one. The damage it does to a single target pales in comparison to what the sorcery tree can provide, however it has the capacity to deal AoE damage. Against long, drawn out fights with a large number of enemies wildfire is very likely to stay applied for a very long duration after it’s applied. Acts as kind of a set it and forget it ability that helps to deal with tough groups of enemies, as well as providing a damage ability to the nature tree which normally doesn’t have any options for dealing direct damage on its own outside of summons. 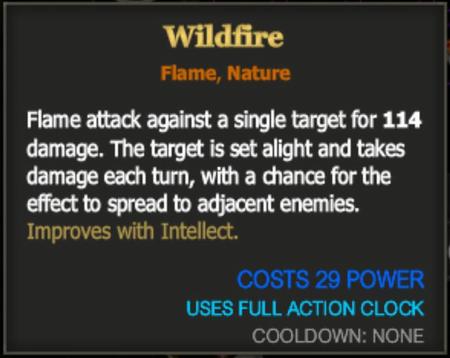 Applies nature’s balm to all other party members. Very useful for dealing with mass poison as well as keeping your whole party insured from damage. Acts as the nature tree’s mass heal, and is definitely a very strong healing ability that gives a strong argument for building a nature user as a healer. 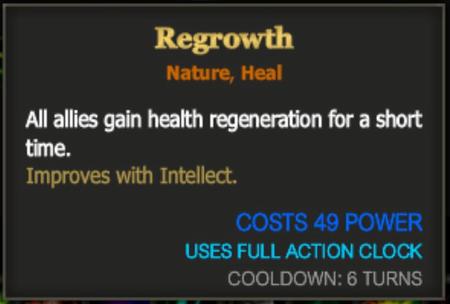 In this guide I will cover: How to Distribute Stat Points on Your Troops, Tanking Strategy, Focus Fire, Skills That I Like and Use a Lot. Other MDG Guides: Beginners […]

Monsters’ Den: Godfall – How to Prepare Your Fight

Recomended Equipment So, you have four level 1 fighters and you’re on your first mission, good for you! So, how do you prepare for a hostile encounter? Well, what I […]