How to ascend, what you do when you ascend, and more fabulous information about ascension. This guide covers the Tek Cave and the Tek Boss.

Ascension is a long and lethal process through which your character gains levels. To ascend, you have to get all the artifacts, kill all the bosses, make it through a long lava cave full of carnivores, and beat another boss.

In return, you’ll get the ability to level up by 5-15 more levels. Ascensions can be done repeatedly, so long as you have what it takes. 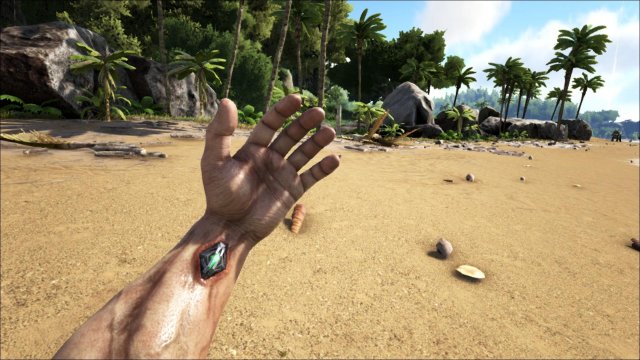 Implant after a gamma ascension. If I did a beta or alpha one the implant would turn yellow or red.

Sidenote: Ascension is currently possible only on The Island map.

Now that you know what ascension is, ask yourself: “Do I actually want to ascend?”

Bring powerful (non-flyer) dinos that can deal high damage and take heavy hits. These include:

Generally though, a legion of high level rexes and 1-2 yutyrannus is a safe option. You may also want to bring a few sacrificial dinos to lure the giga(s) away/into lava so you don’t have to deal with them.

For the Tek Cave you can bring 50 dinosaurs, and an indefinite amount of people, but you only have five minutes before the doors to the tek cave close. For the boss, you can bring anything that survives the cave.

Dimorphodons spawn in droves in the Tek Cave, and they attack riders rather than their mounts. In addition, one of the Tek Boss’s attacks can both dismount and stun you, leaving you to the mercy of the boss and its minions. In addition, the Tek Cave averages 58 celsius, and the area the Tek Boss is fought in can reach -28 celsius. Bring fur and ghillie, possibly flak if you have good enough temperature bonuses. If you can, try as well to bring multiple sets.

For weapons, ranged weapons can be used to lure distant enemies into lava. A sword or pike might be a decent option as a backup, in case your mount dies or you get dismounted.

If you’re going to bring herbivorous dinos, bring vegetable cakes. With carnivores, you’ll similarly want to bring meat, though the need is lessened by the large amounts of meaty enemies you’ll be facing.

For yourself, bring insulating foodstuffs and possibly some buffing ones, like Enduro Stew. Medical brew and blood would be a good idea too. Also bring the basics, like a canteen and cooked meat.

As for non-food, parachutes/grappling hooks will save you from accidentally falling into lava. 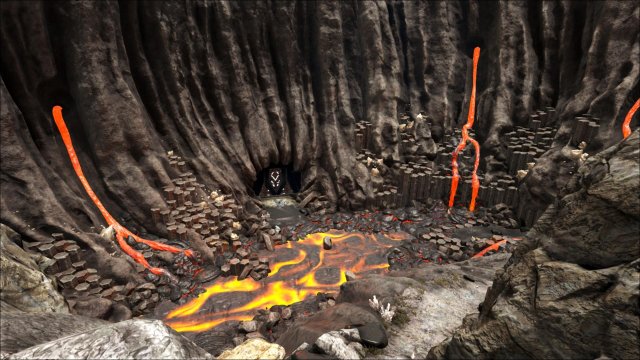 Be very careful when landing though. The flowy part on the left side isn’t a different colored rock with lil lava streams in it. THE ENTIRE THING IS LAVA! I learned this the hard way. 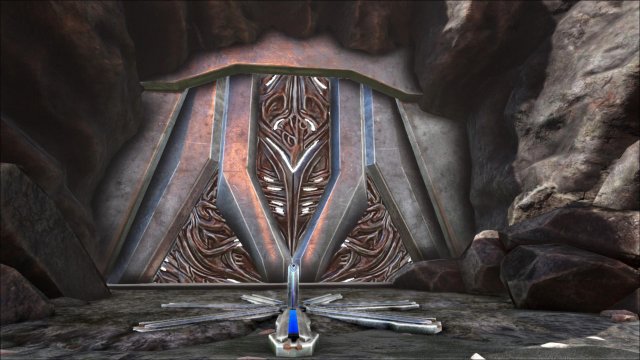 Land somewhere, walk up to the front of the intimidating doors, and deposit your trophies into the trophy receptacle. Select what kind of ascension you’d like.

The doors will open up into the vast and spooky Tek Cave. The doors will close in five minutes, so take that time to quickly load your dinos into the cave. 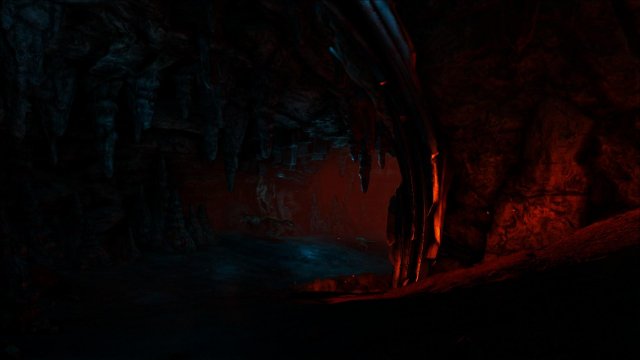 Once in, you’ll have to fight the miscellaneous carnivores that litter the cave. These include:

There are ways to traverse the cave without fighting, like crawling past with ghillie armor and cactus juice or gliding past with an archaeopteryx, but you’ll have to fight a boss at the end, so not bringing combat mounts is not recommended. 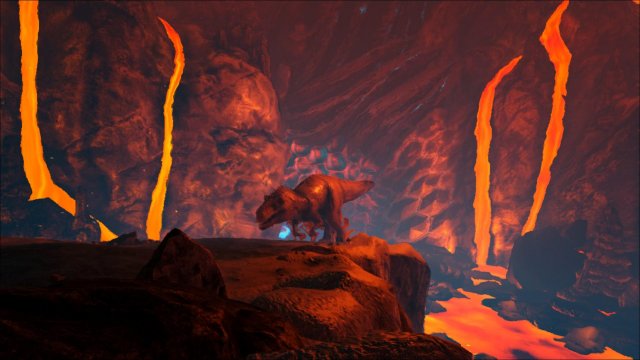 Finally, at the tail end of the cave, is the lava bridge leading to the teleporter leading to the boss leading to ascension. If you’re doing a gamma ascension, this will be your first guaranteed giga.

You can try and fight him, or you can lure him into the lava. Get a parachute and jump off, then grapple up at the last second. Alternatively, send a rex into the lava and shoot it with a pheremone dart if you have one. 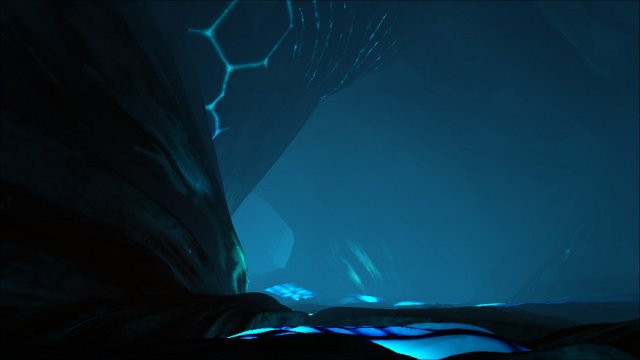 After getting past the giga, you’ll find yourself in the Tek part of the Tek Cave. No lava here – it’s ice cold. This is the -28 celsius part I was talking about, so get your warmest gear on, eat your warmest food, and cuddle up to your warmest dinos. Just walk on through – no dinos in this part – until you see the glowing sphere known as the teleporter. 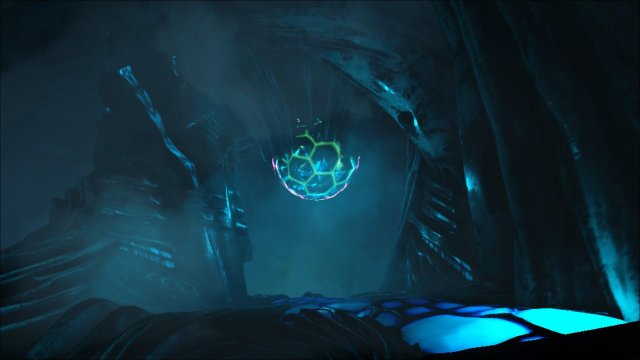 Once activated you’ll have a minute to get all your dinos onto the platform with you. Then, once the minute is up, you’ll be warped up to the next part of the guide.

Side note: You can’t use beds or sleeping bags in the cave, dinos can’t leave through the entrance once in the cave, and if you log off you’ll die while in the cave.

This section is mostly just exploring. If you want practical information, skip this section. 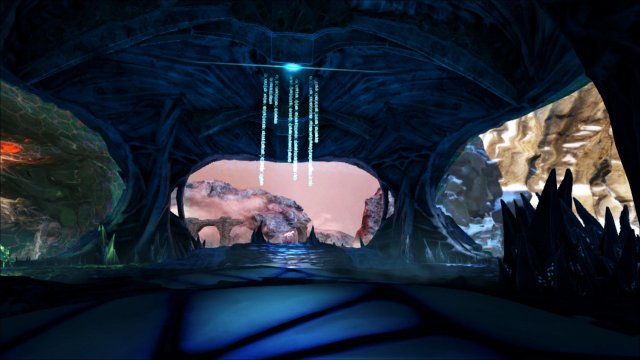 Once teleported, you’ll find yourself in some kind of alien surveillance station, along with three windows to the boss arenas. Behind you is a hallway leading off towards more alien stuff. There aren’t any enemies here yet, so you can relax, but it still is freezing cold. 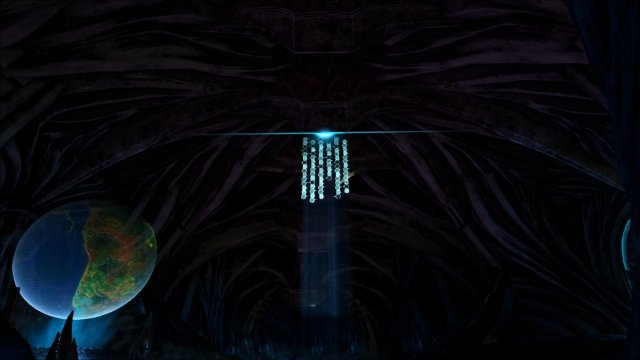 The hallway has a spinning globe on the left, the way forwards ahead, and some items of interest on the right. 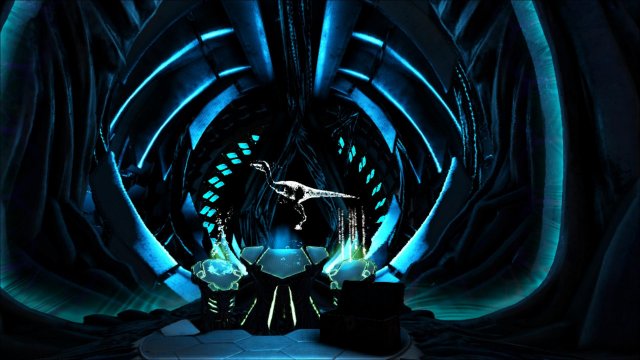 The right: A machine showing dinosaurs, and an explorer note (Mei Yin 31). 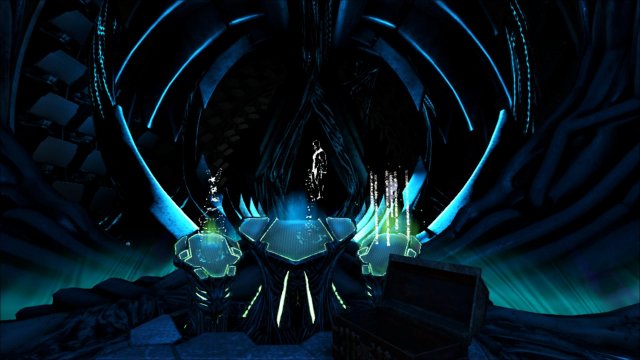 Keep going straight, and you’ll pass another globe, plus a machine with another note: Rockwell Record 29. 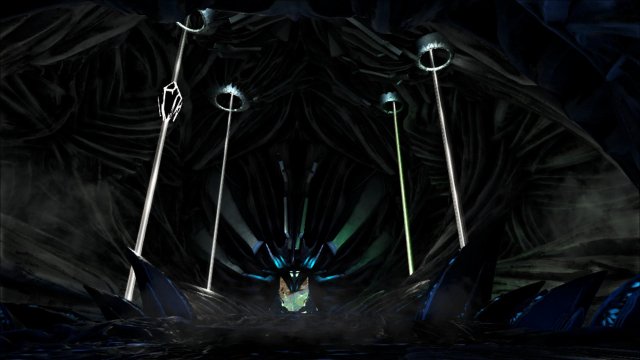 You’ll pass a room with what looks like loot beacons. 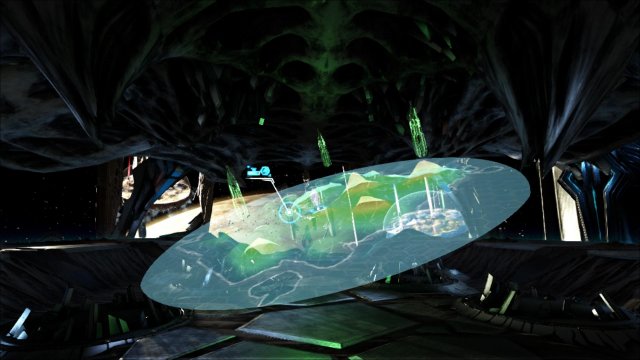 Finally, you’ll reach a big room with a big tilted 3D map. At the end of the room is what looks like a giant implant. Make sure your dinosaurs and you are at full health, and that you’re ready for anything before taking any steps into the room. 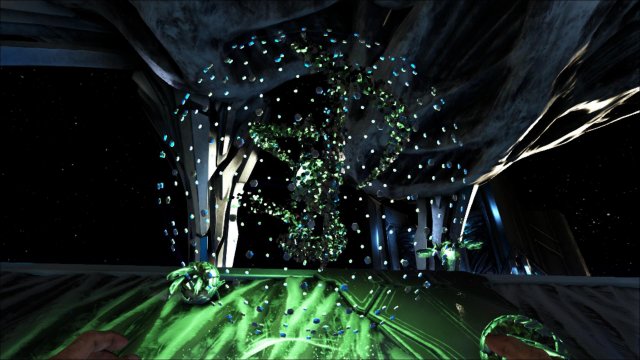 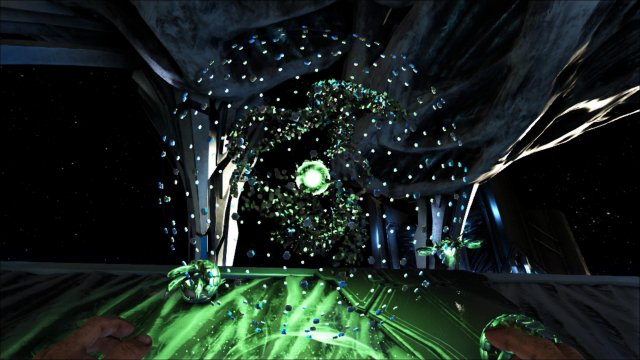 The Overseer is the Tek Boss. It has ~60k health on gamma level, presumably more on higher tiers. While technically, it is lacking in health, it makes up in… other ways. When it first awakens, the Overseer will look a little like this. In this form, it’s immune to damage and doesn’t move/attack. Instead, it summons its minions. 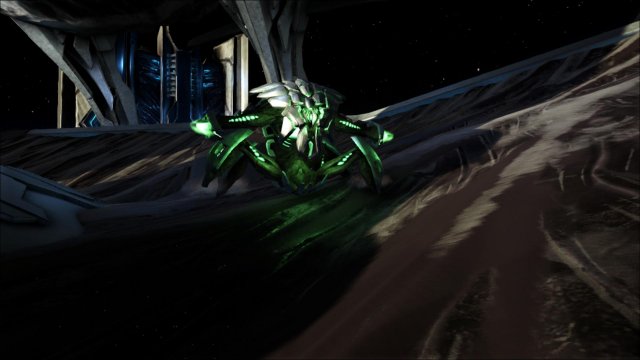 This is a ‘Defense Unit’, one of the Overseer’s minions. It can turn into a ball and roll, and attacks things. They have a few thousand health (in gamma), and explode when killed. 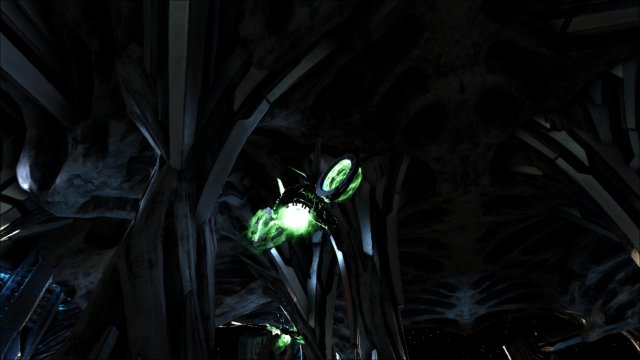 This is the Overseer’s other minion. This one will hover, out of your melee range, and shoots blue projectiles.

Sidenote: I wasn’t able to get its name yet. When the overseer isn’t being immune to damage, it’s either doing nothing or shooting lasers. The lasers deal damage, but they also stun you (and your dinos) for ten seconds, causing you to automatically dismount. This can be dangerous, especially since this attack follows the mass-summoning of minions.

While it may seem like you should avoid the Overseer most of the time, you should actually be attacking it as much as possible. That’s because the majority of your time vs the Overseer will be spent fighting its shapeshifted forms – that’s right. Shapeshifting. After a certain amount of time the Overseer will transform into a version of the Dragon, the Megapithecus, or Broodmother Lysrix. If you kill its form, it turns back into a regular Overseer, with the same amount of health it had before it changed. Unfortunately, it’ll summon another batch of minions every time it reverts.

Sidenote: Each form you destroy gives a message like you killed the boss. As the Dragon, it breathes purple fire (with fire effects) and has a bite attack. As Megapithecus, it has a rock throw attack and a punch. Broodmother has a stamina draining bite and a slowing attack. Repeatedly attack it between forms and you’re sure to win. After killing the Overseer, he’ll drop a glowing map of a solar system. Approach, and one planet in particular will expand. Near the edge of the room is a small, metallic sphere. Get close to it, and the screen will start to go white. 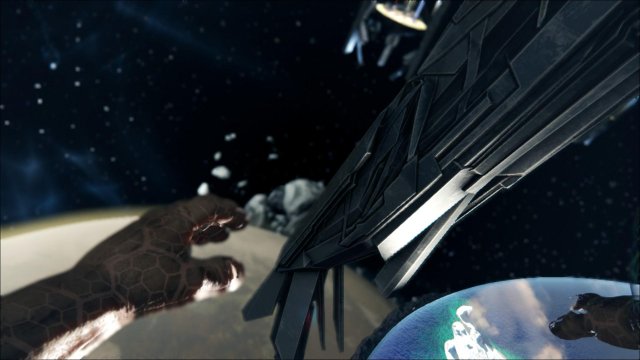 Then you’re blasted out of the space station. To this acid trippy lightshow (I think it’s like a cluster of Arks or something). Where do you get Silica Pearls in ARK? That’s a good question – this guide will show you how to easily farm silica pearls for use in your electronics, saddles, […]

ARK: Survival Evolved – How to Tame a Spino (The Island)

Spino Taming Guide KO Strategy Taming a Spinosaurus takes a considerable amount of time, even greater than that of a Tyrannosaurus. Torpor is depleted rapidly, at just over two per […]