A guide to getting every achievement in Hiveswap!

This guide will contain spoilers for all parts of Hiveswap: Act 1. Most achievements should be easy to get without a guide, so maybe give them a go on your own? This is to help anyone who’s completely stumped.

OVER? BUT WE JUST STARTED!
Contact Jude for the first time by walkie-talkie.

LIGHT WEAPONRY
Get batteries from the radio in the kitchen, and use them with Joey’s flashlight.

WHY’S IT EVEN LOCKED
Spin the globe and get the key to the attic.

NOW WHAT IN THE HELL IS GOING ON IN HERE
Make it to the attic.

ACCIDENTAL ASTRONAUT
Talk to Xefros again after you’re told to look for Dammek.

LET THE RUMPUS COMMENCE
Be Xefros.

IT’S A LIVING
Make it to Dammek’s living room as Joey.

G R U B B _ _ S
Decipher Dammek’s flavour of the week and complete the second game of Snake as Joey.

CELL YOU LATER
Complete Act 1 with the E battery from Grandpa’s universal remote in your inventory.

BATTER LUCK NEXT TIME
Complete Act 1 without the E battery from Grandpa’s universal remote in your inventory.

DON’T ENCOURAGE HIM
Give the Bubsy poster some dog treats.

HOPE SPRINGS ETERNAL
Use the ballet shoes on the slinky up near the attic.

NO. THEY’RE YOURS NOW
Try putting the E batteries back in Pa’s universal remote.

THEY’RE STUFFED
Feed dog treats to the three taxidermied bear-ish creatures in the living room, the narwhal hidden in the basement, and both the deer and the lion head in the trophy room.

WHERE THEY BELONG
Throw the pogs in the trash, by the fridge in the kitchen.

MAY I HAVE THIS DANCE?
Tap-dance and ballet at the dancers in the basement.

PERIOD-APPROPRIATE REFERENCES
Fax some pogs with the power back on, also by the fridge in the kitchen.

ACTIVITY RECORDED
Locate the mysterious figures out the hidden window in Jude’s treehouse. 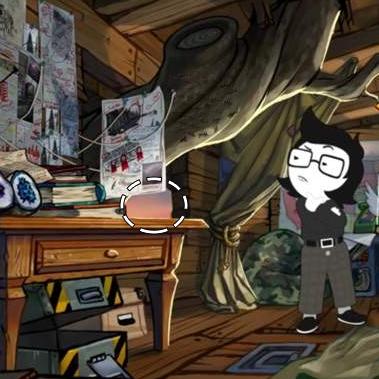 SEQUENCE BREAKER
Try firing a flare at the evil-looking mansion out the same hidden window.

RED AND GREEN HERRING
Fill a sack with two of the same marble.

THE LONG GONEBIRDS
Examine Jude’s bird cage after sending each pigeon out, including one last time during the final STRIFE sequence.

BIRDGEONING TALENT
Use Byers on the piano and listen to his haunting refrain.

SURELY HE HAS SOME ADDITIONAL PURPOSE
Use Byers on 30 different objects.

SERIOUSLY, DON’T EAT THE MUMMY
Throw some spice on the mummy hidden in the attic under a chair.

CONVEXED
Use the bent spoon on the pile of bent spoons.

PLAYING WITH POWER
Use the cuebat with the pusher playbook.

VENT FRUSTRATION
After crawling through the vent, send Byers back the way you came.

JUNIOR VETERINARIAN
Use the bowl of milk, dog treats, Alternian bestiary, and Alternian veterinary kit on Byers. The milk must be in the bowl to proc this achievement.

BOROS
There is no known way to legitimately unlock this achievement as of now. It is very likely that there’ll be a matching achievement called >OURO, either in Act 4 of Hiveswap or at some point in Hauntswitch. Bottom line, don’t think too hard about it for now.

Fastest way through the game (as far as I can tell). Will give basic instructions on where/when to do things, but will not go over things you are assumed to […]

A guide for zipping through the game’s gameplay! Harley Manor You’re playing as Joey unless specified here. Joey’s Room Grab the tap shoes next to you.  Walk left a bit, […]