This guide is less about setting up your species than it is about managment of your empire. Whatever you choose for ethos and traits will obviously impact your playstyle, but lets run under the assumption that you will adapt this guide to suit your species particular niches. 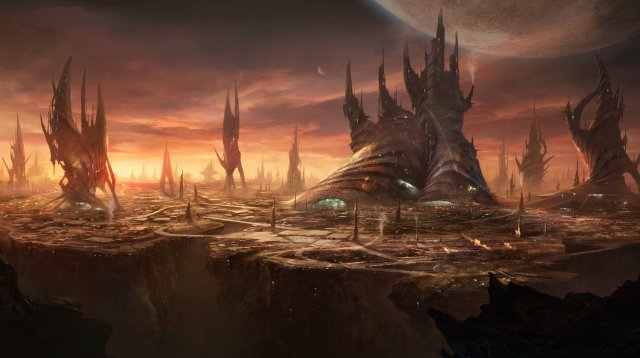 I tend to play fanatic militarist/militarist and materialist. I make them strong and intelligent. To offset this, I make them sedentary. I have yet to go through a game where sedentary caused me problems, as it deals with migration and resettlement and they are two mechanics I never use. 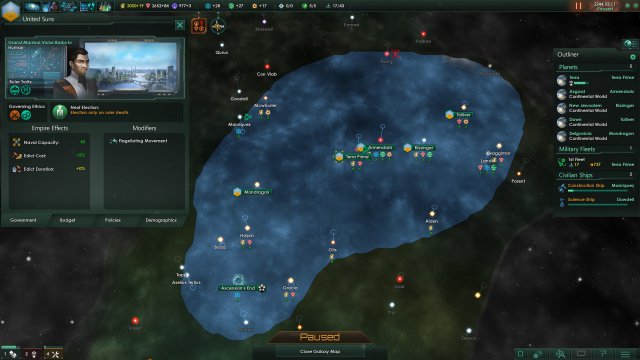 Research and Military strength are good fits to my play style. Namely conquer everyone and everything and be better prepared to do so. Right now, Stellaris is not a game you can win diplomatically, at least not nearly as easily as militarily. Oh, you could befriend, vassalize and absorb to reach the threshold of owned colonized planets, but the way modifiers are set now, you are much more likely to struggle to get a meaningful alliance, to vassalize neighbors without doing it through conflict, and in general playing nice doesn’t seem to pay off nearly as well as carrying a big stick. You want nuance and federations? Be a xenophile pacifist.

The heart of this guide is managing your core worlds. These worlds matter most, you’ll likely colonize them first, and should be the most beneficial planets you own. 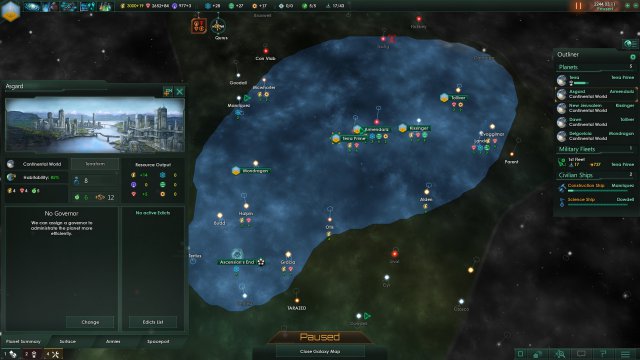 Here we can see my five core worlds in a early game. I have one selected, Asgard. Asgard has a lot of food, is generating a substantial amount of energy credit, and a mediocre amount of minerals. A lot of food is good while you are still trying to fill a planet with pops. Once its filled? Surplus food doesnt do any good for you. Re-spec tiles, making sure not to starve, but don’t be running a world with 26 food, its a waste of tile space. 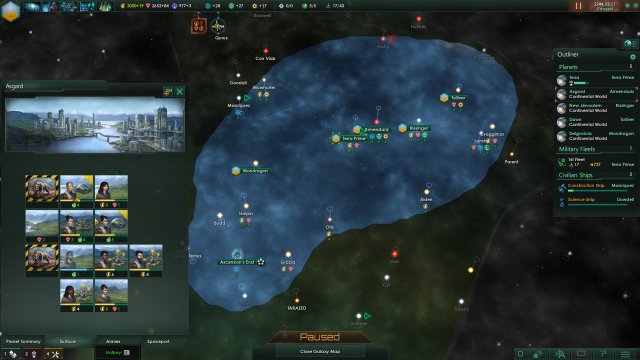 Its important to play to the strength of the tiles. occasionaly you will end up with tiles like the two you see above with one energy credit and one mineral. My experience is this, if your planet is already heavy in one of those resources, play to the strength not the weakness. Certain buildings will give you percentile boosts to overall production of a resource on a planet. Better to have those two extra buildings be adding to the total to increase the yield from the percentage. Short of it? Specialize your worlds in minerals, or energy credits. If you are running a pretty even split, consider passing that world to a sector. You want specialized core worlds.

While you can techically be “in debt” with minerals as well as energy credits, i’ve never run into it. Even though energy credits have a lower storage ceiling that minerals, you want to hit that ceiling and stay there. You can and obviously need to splurge and spend those credits, but don’t feel like your doing something wrong if you hit that credit limit and stay there.

Colonize Colonize Colonize. When you first start the game, you need to research colony tech IMMEDIATELY. If you pass it up, it may be several shuffles until it comes up again, and in the meantime you’ll have been having to play with one hand tied behind your back.

Your core planets is at first limited to five worlds (or more depending on government type, but lets stick with the base 5 for now). Depending on your start, you may or may not have 5 worlds of any type in your sphere of influence. You’ll need to survey. Fun fact, move your fleets ahead of your survey team. While they won’t survey a planet and allow it to be colonized, they will identify if a colonizable planet is even there. Also, they deal with the nasy threats that otherwise send your science ship running scared. Plus the trail of debris they leave behind gives your something to scan. Its a Win/Win/Win.

Cherry pick worlds or colonize whats closest? Tough one. Personally, I don’t think you will find such a diversity of worlds you can actually colonize in the early game that you will have to pick and choose. Here is the more pressing issue. You colonize your first five worlds, your still early on and the next planet you colonize is going to put you over the limit. Firstly, thats what sectors are for. If you are running high on energy credits (as you should be) its not so bad. You can hold onto that sixth world for a little while before Sectoring it out. This allows you to tailor it before the AI takes over. While you can always gift credits and minerals to sectors, you can only give them a rough idea of what they should spec their systems for. If you have them respect tiles natural resources, you will have a diverse output. Which is fine, thats why you will have specialized your core worlds.

When one of your core world systems has multiple habitable planets things get interesting. You can’t sector out individual planets, so waiting for your core limit to go up is advised. If the system has two really promising worlds you can colonize right away, do it, versus opting to colonize another system. It can be a toss up, but I think you are better off having 4 systems with 5 worlds if you have a choice. 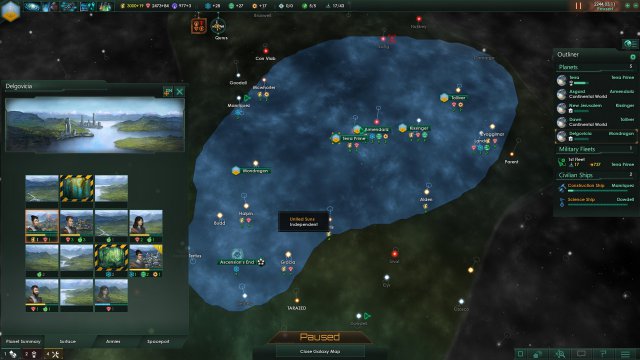 Geographic location does not matter when it comes to core worlds. It would be sure nice to be able to highlight core worlds on the map in some way (talking to you paradox). Outposts are handy but only when you need to snatch up amazing systems ASAP. Otherwise, you are better off using colonies to grab territory. Having lots of influence is handy when you have a lot of sectors and a lot of factions. But you will not run into that in an early playthrough.

Your stick. It needs to be big. Make your fleet work. Yes while its in orbit its maintenance is lower. But then your admiral isn’t clearing the way for your science ships, zapping baddies for debris, and scouting ahead to cherrypick which systems to survey first (the ones with world types you can colonize). 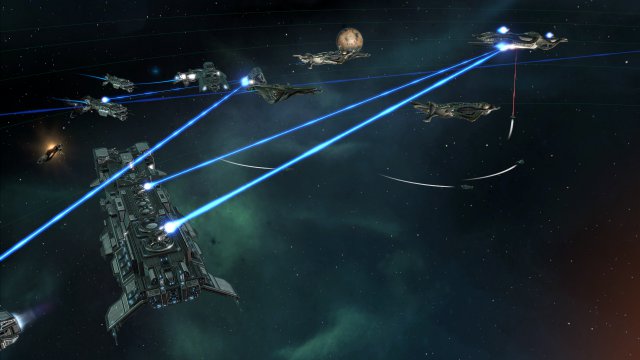 Keep your fleet upgraded, but do so in managed steps. Don’t upgrade everytime you get one new component researched. Your fleet should be busy, and upgrading costs downtime along with minerals. Make the downtime worth it. Better a few long overhauls where a second fleet can be out working then a pit stop every few months for the newest deflector or a slightly higher tier weapon.

Now, here’s the rub. When you update your design, you might use the auto-complete button. That results with ships often with an excess of power. Now, you can’t save ship designs with negative power. But do ships with a surplus of power run or fight any better than ships with little or no surplus? To my knowledge? No. Excess power on ship designs is like excess food on planets. You are wasting resources. I tend to build designs that are expensive. If I have the surplus energy to make a design have higher tier weapons, I will. This goes to the arguement of quality over quantity.

Make sure to keep an even spread of small medium and large weapons. Until its addressed in patches (which it already will be) battleships and cruisers have sections with high limits of small and medium slots. Those are well suited agaisnt fleets of corvettes and destroyers.

I tend not to specialize my ships too much. But corvettes and destroyers are for engaging each other, while cruisers and battleships are for taking on everyone, if they are built diversely. Keep an assortment of weapon systems on board. Do not specialize in one weapon type, even on one ship and then build another with a different type. When able, every ship should have at least two different weapon types, not just two energy types or two ballistic.

The truly random section of the game. The random, card deck style system used by the game means you will not always research the same things in different playthroughs. Your ethos will help dictate what techs pop up. Certain research missions will up the progress towards a specific tech and make it available as a research option. Truly, this is the section where your luck comes into play as much as anything but I have some suggestions. 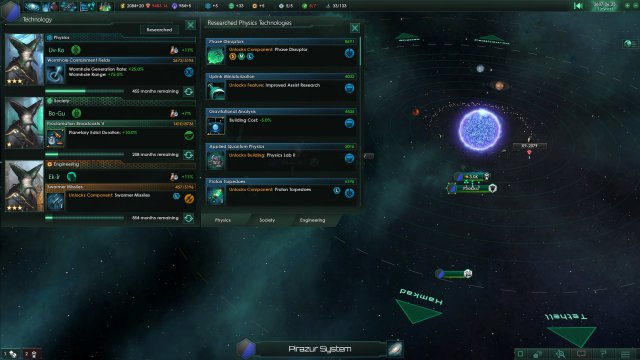 Diversify your weapons as soon as you can. Like I stated earlier, you need to have option in multiple weapon types when you design your ships and upgrade them. Is it better to have options in all three categories or higher tier options in two categories? Again, I go to quality over quantity.

Shields are your friend, research them early and often. Same with energy producing modules. A module giving you more power placed in the right spot means more room and options for weapons and shields.

Research tile blocker removal whenever possible. Your core worlds don’t do any good if you are not utilizing every tile available. This tech also lets your sectors to clear and use those tiles as well, making them more productive, giving you a higher tithe.

All these considered, if you are having a hard time deciding what to research, I default to the cheapest choice in terms of research points required. The sooner you get the tech, the sooner you can implement it and have it benefit you. It also reshuffles and presents the deck again more quickly. The only times I will pick the most expensive option is if it is a rare card that I actually want (I ignored psionics a half dozen times and it kept popping up anyway the one time I had spiritual ethos) or a tech that can 1. Improve my fleet through new ship class or 2. give me a higher tier weapon in one of the two or three categories I am focusing on, like say plasma throwers (energy armor killers), torpedoes(shield ignorers) , and kinetic (high rate of damage no speciality).

There you have it

This guide is just one way of playing the game. Play to your strengths, and most of all, play to have fun and enjoy yourself. Unless you are on an achievement run. God have mercy on you.

In this guide I’ll explain what liberation wars are and how to do them, and the kinds of cool things you can do with them. Guide to Liberation Wars How […]

Console commands can be accessed by opening the console ingame. To do this, press the Tilde Key (~). For US keyboards, this may be Shift + #. Console Commands (Cheat […]