A brief walkthrough of the ‘Fires of Defeat’ game-start mission which can be a bit hostile to new and experienced players alike.

This guide is designed to shed a bit of light on the Fires of Defeat gamestart mission where you are asked to destroy the Zyarth Expeditionary Fleet and outline one method of completing the mission. This mission is challenging and it is quite easy to get blown up when you least expect it and close calls are fairly common.

This gamestart has an awful starting ship even compared to the other starting vessels. Its a jaguar with only the following:

But what this ship lacks in ability it more than makes up for it with charm, speed and a lovely red paintjob that makes it that touch faster. The player relations are equally not great with the Free Families at -5 and Zyarth at -21 meaning the Zyarth Patriarchy will shoot your combat ships (the starting Jaguar also falls into this category). It’s a good thing the jaguar is nimble and fast enough avoid gettin cleaned up by the slightest burst from a pulse laser. Now to get a better ship and reclaim that honour.

Options are limited to get a better ship. Those 15,000 starting credits can of course be used to start trading with the Free Families, Teladi or any other faction that won’t turn that sharp red profile into a molten husk. Trading this way, however, can get a bit tedious and time consuming (this can be important as it has been observed by others that the Expeditionary Fleet has a penchant for getting blown up by the Xenon which won’t complete the mission or yield the achievement). So how else to get a ship? A wonderful, if illegal and immoral, method is piracy. Flying to any of the Free Families sectors (Heart of Acrimony II and Tharka’s Ravine VIII are lovely this time of year) will offer near endless amounts of dispersed Zyarth Colonial Police patrols that are great to add to your portfolio.

Once a lonesome ship (fighters are generally better but if you’re brave you could go for a Dragon or a Cobra) has been identified stay out of range of any weapons (5km at a minimum if unsure) and get behind the ship. Now just gently remove the shielding and most of the hull integrity. From there only shoot the ship once it is already regenerating its shields so there’s less risk of destroying it. It may take a while as every time the ship gets hit there is a chance for the pilot to eject with a 30 second cooldown but eventually the pilot should bail. The second-hand ship may now be claimed and I recommend selling the jaguar to have a little more credits. Upgrading from a scout to a fighter is probably not enough to take on the Expeditionary Fleet so I recommend repeating the process with a Dragon (Dragon raiders are okay too but they aren’t particularly resilient and you don’t want to annoy the Free Families).

With a Dragon corvette and a bit of cash things are a bit easier but its likely that money is still short (I only had about 400,000 in the bank after selling my jaguar and a chimera donated by Zyarth). Again trading is an option but it can still be a bit tedious at this stage. My approach was to just steal more ships (I stole 3 Dragons and a Cobra) and sell them. This money is essential to upgrade the playership to take on the fleet. The loadout I used was 4x Tau Accelerators and 2x Thermal Disintegrators with Flak turrets and maximum split engines and shields and left me with 6,000,000 to spare. Ultimately, just upgrade to what feels like a comfortable playership in any other game. Missions are also great to do in this time to build up to at least +10 with at least one faction to get those better weapons. With a bit of cash saved up and a ship armed to the teeth it is now time to take out the fleet.

Destroying the fleet is best split into two stages as the ship will have to get refitted once in the middle. First is the destruction of the escorts and second is the destruction of the destroyer (see the next section for the destroyer component). The fleet has a fair few escorts considering there is just one destroyer to protect and consists of 4 Dragon corvettes, 4 Chimera heavy fighters and 8 Asp fighters packed into a “point guard formation”. A good strategy is to rush in headfirst using travel drive and hope some of the ships will breakoff to follow. Once some of the ships turn to follow, drop back to cruise speed and lure them out further (Leaving travel drive on causes them to lose interest). Once there at a sufficient distance from the destroyer and the other escorts flip the ship around and engage them. This process can be repeated with increasing ease until all the escorts are destroyed. Now its refitting time.

Time to become a Destroyer destroyer. Simply refit at a wharf or equipment dock that is +10 from all those missions and switch out all weapon emplacements for torpedo tubes using money from all those gifted ships (it doesn’t really matter which version of torpedo tube but the mk2 version carries more torpedoes which is more fun). Now with enough torpedoes (a fully kitted dragon can hold 52) that inadvertently setting them off would make a flash brighter than Akeela’s Beacon its time to take the fight to the destroyer. 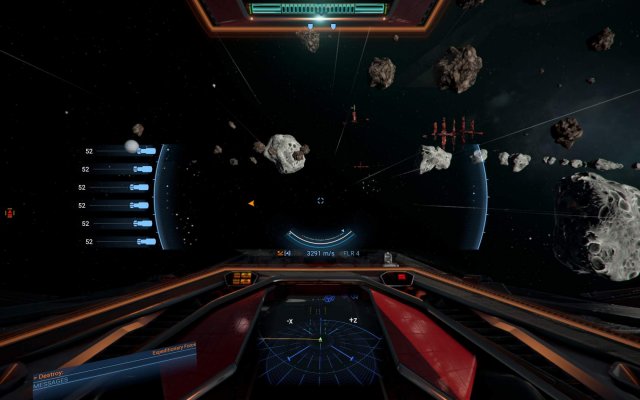 Blowing up the destroyer isn’t that much different from the tactics to take out the fighters except turning flight assist off is mandatory. Point the ship so that the ship is inclined just underneath the Rattlesnake’s belly and engage travel drive (corrections can be made if the ships aren’t close enough to colliding without actually colliding). After everything is aligned correctly switch off flight assist while leaving travel drive on and point the nose of the ship to face the destroyer and release the torpedoes. It is very easy to miss or have the ship hit the destroyer before firing but that’s okay because There’s plenty of torpedoes to spare. Before beginning another pass with the torpedoes just check that the torpedoes are reloaded. Make as many passes as necessary to destroy the rattlesnake, in my dragon it only took 18 torpedoes used 6 at a time in 3 passes but I’m sure it can be achieved with less.

With the fleet and destroyer blown up that completes the mission. Its easy to check if its been completed correctly as there should be a message from the free families and an associated reputation increase, a severed head in the inventory (no really, a severed head) and the achievement should complete.

Other X4 Guides: Gameplay Tips. How to Get Unlimited Money (Cheat). How to Hack Data Vaults. How to AutoMine. Crystal Mining Guide. Docking Made Easy. Sector Map. ContentsI Dropped Into […]

Now I will tell you about the easy money making scheme, which I sincerely hope will get fixed. Other X4 Guides: Gameplay Tips. How to Get Unlimited Money (Cheat). How […]

Don’t like to make factories and in general sim games? In this case, you have the spirit of a pirate. This game is slightly confusing and requires a lot of […]