This guide will explain players how to make their own mod for The Last Spell.

Guide to Create a Mod

What Can I Mod in The Last Spell?

For the moment, you can only add your own localizations in The Last Spell. However, that will change in the future!

How to Create My Mod in The Last Spell?

You first need to create a “Mods” folder in this folder %Appdata%/../LocalLow/Ishtar Games/The Last Spell/. Then, inside this folder, you must create a folder with your mod in it (you can name the folder as you want).

In the new folder for your mod, you need to have a file called “manifest.xml” and a folder called “Localization”. If the folder doesn’t have them, then it won’t be considered a mod.

Once that’s done, your mod is enabled ingame!

Check if the mod is active

When you launch the game, you should see a button in the upper left corner of your screen in the main menu. 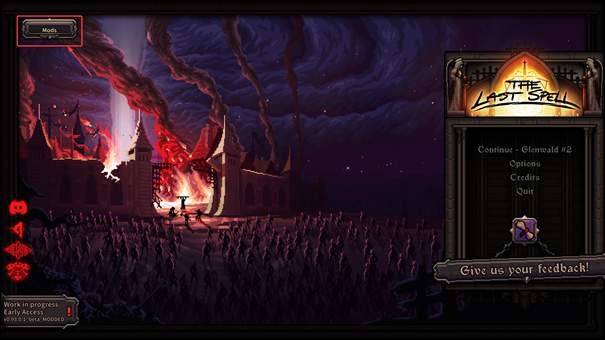 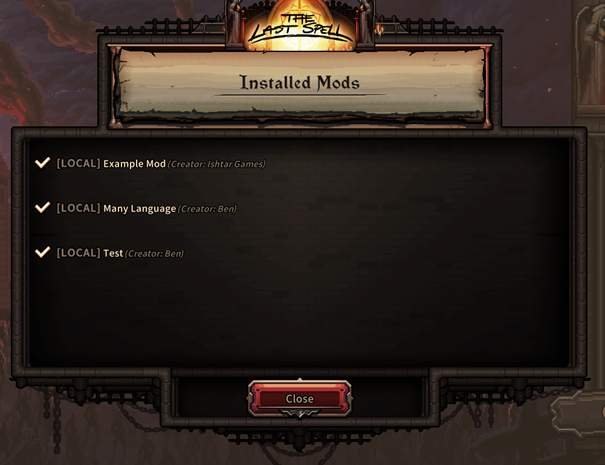 The button will open a menu displaying the currently active mods ingame.

When you’re subscribed to a mod on Steam, then you will automatically download the mods to which you’re subscribed. If you’re also the creator of this mod, then you’ll technically have 2 version of the mod. So, one of those version (the Online one) will be greyed out, to prevent any bug or issue).

Publish a mod on the Steam Workshop

If you want to publish a mod on the Steam Workshop, you’ll need to be in “Developer” mode.

In Steam, you need to right-clic on “The Last Spell”, “Settings”, and a menu will open.

In the last line called “Launch Options”, you’re going to write the password to unlock the “Developer mode”. The password is “-dev”. 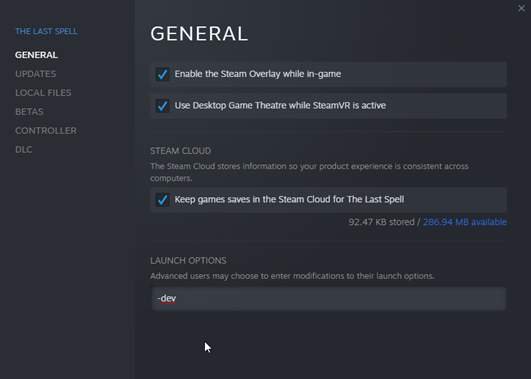 Once that’s done, you need to launch The Last Spell, and go back to the “Mod” menu. Now, you should have a screen that looks like this. 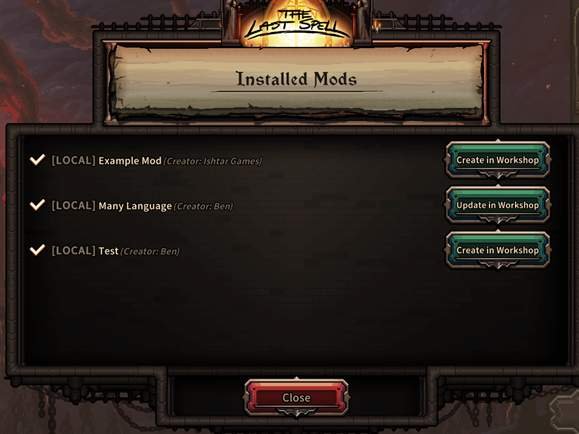 You need to click on “Create in Workshop” to upload your mod in Steam.

Once that’s done, a file called “steam_workshop.txt” at the root of your local mod will be created. The file is actually a number representing the ID of the mod in the workshop. Don’t modify or erase that file because you’ll need it to publish updates for your mod!

If you have the mod locally, and you’re in developer mode, the button in the menu will change and will be named “Update in Steam”

You need to be the creator of the mod to update it! Otherwise it won’t work.

Upload a thumbnail for Steam

If you want to create and upload a thumbnail to it’s displayed on Steam, your image:

We suggest making square images, because if it’s not square, then it will be resized and may end up looking less good!

This guide helps with the changes to the build orders for the new update, where now you only start with two workers which makes the mines early on really hard […]

The Last Spell – List of Portrait Codes for Female Characters