This guide will show you how to build and program a logic chip solar tracker using olny four chips.

You will need the following materials to complete this build

as many solar panels as you want.

Setting Up The Solar Panels 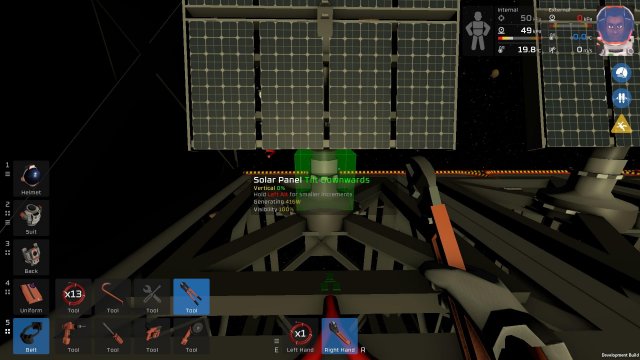 Build your panels with the power and data ports separated. After the panels are placed use your wrench to tilt them to vertical 0%.

Then use your wrench at the base to rotate them to face the sunrise.

Set Up The Logic Chips 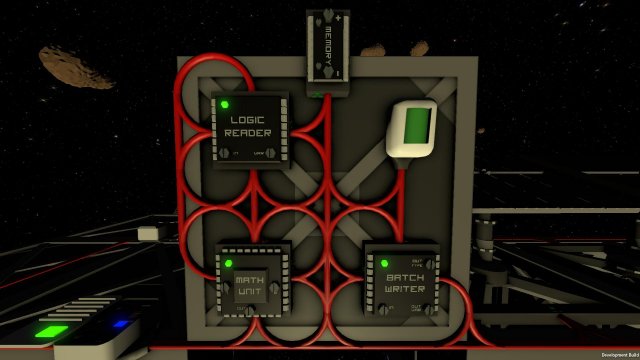 When building the solar sensor be shure it is facing the sunrise, if it is not it will read the solar angle wrong and the tracker will not work right.

Build the first input/output chip as a reader which will take the solar angle from the sensor and send it to the math unit.

Build the processor chip as a math unit, it will divide the solar angle and send the result to the batch writer.

Build the other input/output chip as a batch writer, it will act as a group controller and change the vertical angle of all your solar panels at the same time.

The memory chip will contain the number the math unit will use to calculate the vertical angle the panels should be at based on the current solar angle. 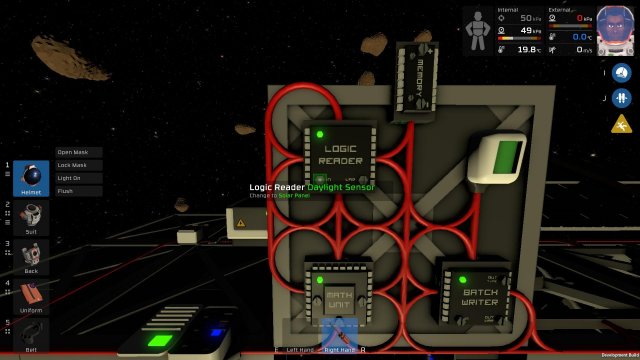 Set the input to Daylight Sensor. 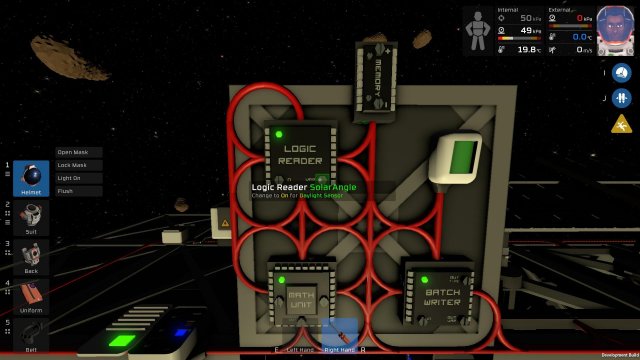 Set the variable to Solar Angle. 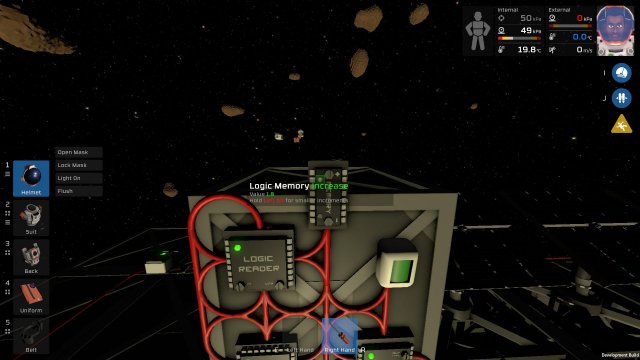 Using the small screw on the memory chip set it to 1.8, you must use Left Alt to change the number in tenths. The reason we use 1.8 is there are 180 degrees of sunlight but only 100 positions the panles can be in. If you divde 180 positions of the sun by the 100 positions of the panels you get a divisor of 1.8
So if the sun is at 90 degrees the math unit divides by 1.8 giving the panel an angle of 50. 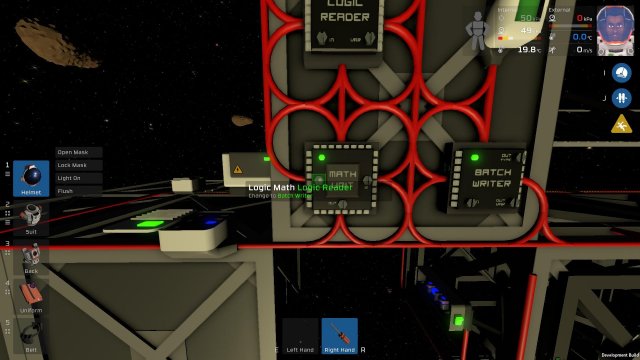 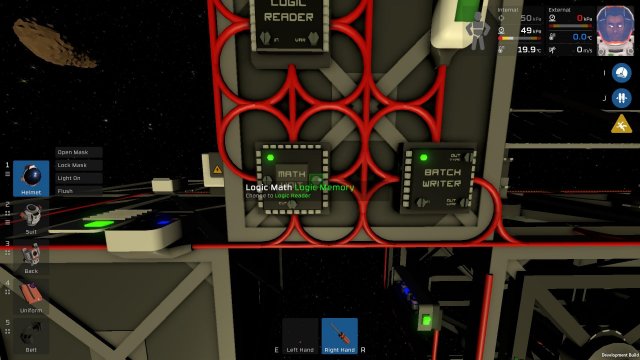 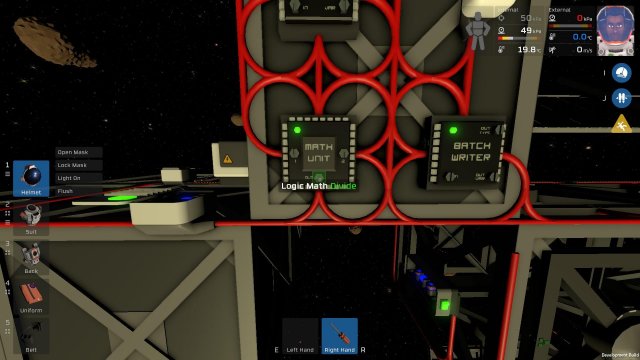 Set the output to divide. 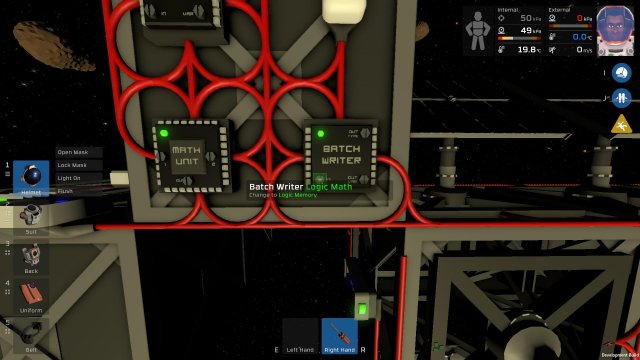 Set the input to logic math. 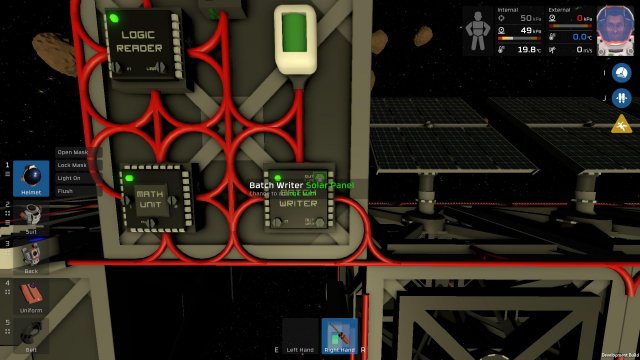 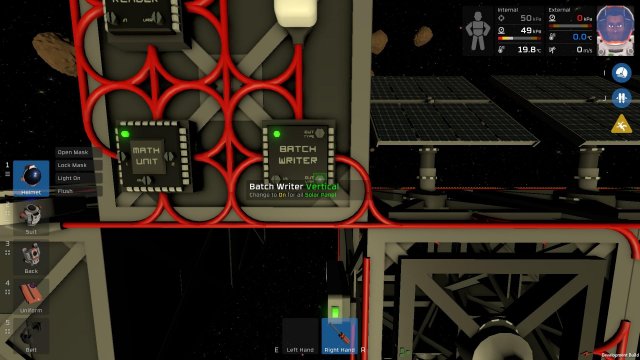 Set the output variable to vertical

That’s it your panels will now auto track the sun. After the sun sets the panels will reverse direction and track the sun through the night and reach 0 at sunrise. This is usefull as you can tell how much longer night will last. Also you can add panels to your system without changing the logic system in any way.

A guide to show you how to make a very small footprint canister handling setup that can mix most desired mixes, do strait gases with O2,H2,N2, and also empty waste […]

Stationeers – Guide to Your First Pressurised Base with Airlock

A simple but detailed guide for a simple base in a pressurised enviroment and how to mantain it. Other Stationeers Guides: Super Simple Steel Smelting. Super Simple Autocycling Airlock. Building […]