A simple easy setup for controlling temperature in your base using wall coolers / heaters. 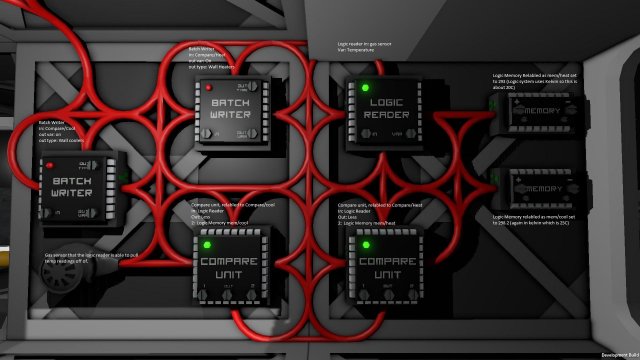 Alright so here is a simple thermostat design.
Heat kicks in from 0 to 20C then at 20C it cuts off.
Cooling kicks in from 25 on.
The circuit used wall heaters and coolers that are on the same circuit, I would recommend to put the heating/cooling system on it’s own apc so as to make sure it’s only turning on the ones you want to be on.

If you havent labled anything, this is the time to start, lableling the compare and memory unit

Bill of materials minus wiring… haha…

Note, on the picture on the compare/cool compare logic chip, for out it says less, this should be greater, not less as you’re setting the upper limit for the thermostat.

Stationeers – Guide to Your First Pressurised Base with Airlock

A simple but detailed guide for a simple base in a pressurised enviroment and how to mantain it. Other Stationeers Guides: Super Simple Steel Smelting. Super Simple Autocycling Airlock. Building […]