The art of Alchemy is one of the most useful skills in the game. This skill is also closely related to Herbalism which seems to be of not much use, yet in fact, it is equally rewarding. In this guide, you are to know how to improve both skills with great efficiency, how to obtain certain ingredients (both rare and common ones), and in what way would they improve your gameplay. This guide will also include a partly explored map of mine and tell you how to utilise the location markers to help with your alchemy preparation.

Reason: Why you may want to develop your Herbalism and Alchemy

Alchemy is the main resort of obtaining potions (as well as poisons). It allows Henry to brew useful potions on an Alchemy table at low cost. However, it is time-consuming before Henry unlocks Routine I perk. The good news is it is easy to level up. With a bit of investment, you can get an almost unlimited source of different potions. Also, you can then have tons of saviour schnapps, which can save you from a frastrative crashing.

Herbalism can benefit Henry in many ways. First, this skill itself increase the range of his herbal harvesting. With a high level, Henry can instantly reap an entire garden’s belladonnas with only one touch. Second, it provides positive perks like ‘Flower Power’, ‘Horsenip’ and also a hidden one ‘Resistance’. It is easy to level up this one as well.

Alchemy: What is an Alchemy table? How to operate it? 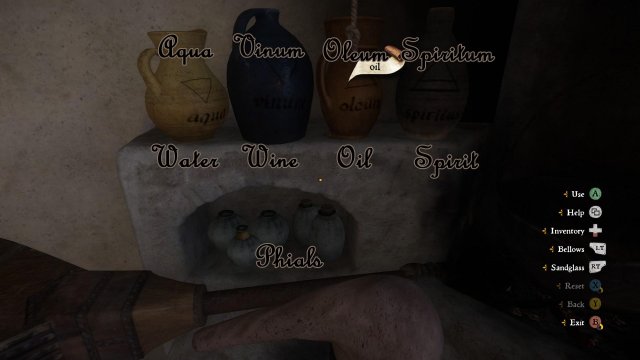 There are four jugs of liquid on the left of the Alchemy table, labelled with Latin and alchemy symbols. They are aqua (water), vinum (wine), oleum (oil) and spiritum (spirit). They are used as the ‘base’ of a potion. The first step of brewing anything is to pour one type of liquid into the cauldron. 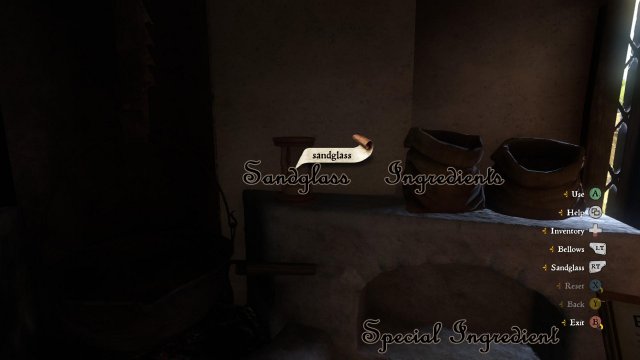 There is a sandglass on the right of the table. Sandglass is for time-counting but actually it is of no use. I will explain it later. All the selected ingredients will be placed here as well. Standard herbal ingredients are on the top of the table, and anything that is not herbal (for example, mushrooms, antler and charcoal) will be put below them. If you snatch something wrongfully, you can always put it back. 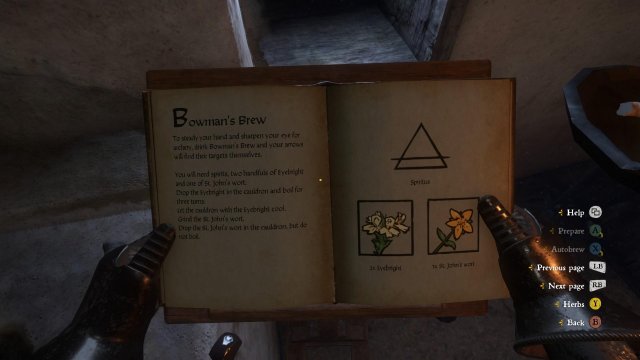 To the most left is the Herbarium, where you can find recipes you have already discovered or recoreded as well as descriptions of different herbs. 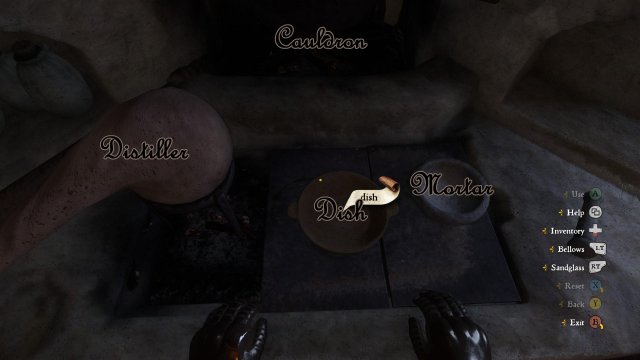 There are three different pieces of equipment in the middle. You can grind herbs with Mortar. You can put herbs and grinded materials on the dish for the next step of your cuisine. If you mistakenly grind something else and want to get rid of it, you can put the thing on the dish. (But you won’t have it back)

Heating is pulling the bellow. There is no necessity to operate it with the mouse or the right rotation because there is a hotkey for it. There is also no necessity to use sandglass for time-counting. Pulling for once is to heat the vessel for one turn, twice is to heat it two turn, etc. P.S.: Don’t mind the boiling visual effect. Even if the description says ‘boil it for 1 or 2 turn’, you still need to heat it for only 1 or 2 turn.

To collect a potion, you need a phial. You can choose to collect the potion from the cauldron or through distillation. If you want to distil your brew, you will need to heat it up as soon as possible.

P.S: Though it is not necessary, Henry should always learn how to read, or he cannot even understand the Herbarium. He can learn how to read texts in your mother tongue from Uzhitz’s scribe. (But not Latin) Uzhitz is at the North-East of the map.

UPD: Though Henry can always buy formulas from Alchemists, yet once Henry successfully brewed a potion for the first time, the process will be instantly recorded in the Herbarium (if he can read and write). A recorded recipe is open to the ability of auto-brewing, which perk can be unlocked at Alchemy level 10.

Alchemy: How to level up quickly?

The experience accumulation is related to the price of your potion. So it is a good idea to brew massive amount of Lazarus Potions with tons of valerian and comfrey. Both plants are common and cheap, and Lazarus Potion values 110 Gloschens with ‘Snake Oil Salesman’ perk. You can easily earn back the money for your recipe book (or you won’t have to) and level up to level 10 really fast.

Once you hit level 10, unlock the ‘Routine I’ perk and you are free of the annoyance of riddling with equipments.

Herbalism: How to level up the skill quickly?

Initially, before Herbalism level 5, you are not able to pluck up a lot of flowers at once. So there is no shortcut. Just randomly pluck up dandelions, poppy, valerians, chamomile, St. John’s wort, comfrey and Marigold — they basically grow everywhere. Once you hit level 5, you can depart to search for gardens — they are mostly distributed deep in the woods which makes them difficult to find.

This guide includes a map that shows the area I have explored, and you can follow it to find these gardens. Once you find a garden, pluck everything swiftly with your level 5 herbalism. Not very long you can unlock all those fancy perks of Herbalism (‘botanist’ is basically useless.) 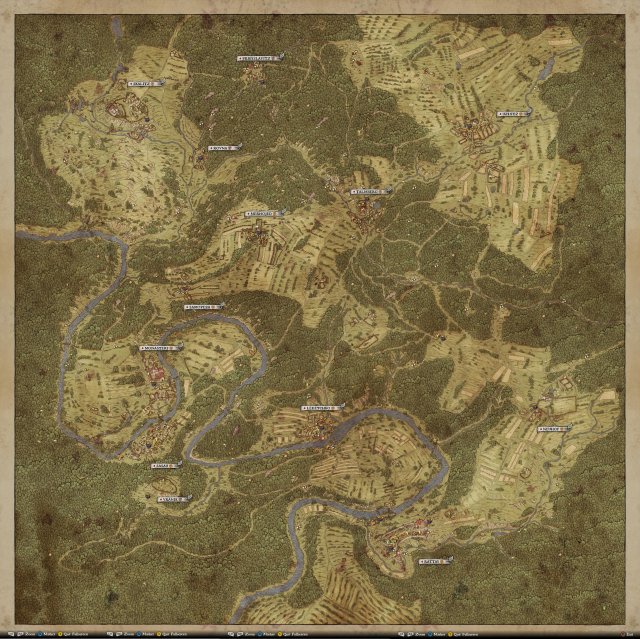 You can harvest the plants you desire from a certain garden — just remember what the garden is growing. (I might make a catalogue out of it later)

Most herbs are common as long as you follow the Herbarium except henbane, herb paris and belladonna.

Henbane literally does not exist in this game (deleted, I assumed). 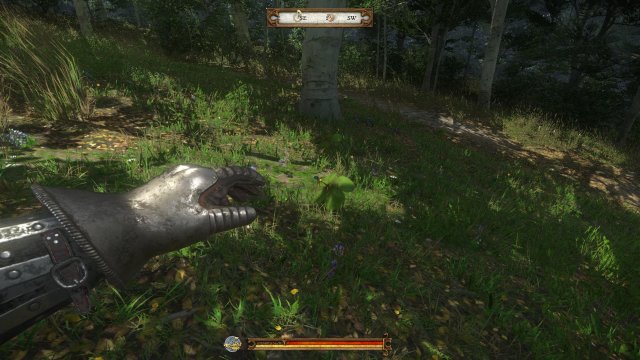 Herb paris can be found in dense forest, but you need a sharp perception to spot it (I mean you, not Henry). 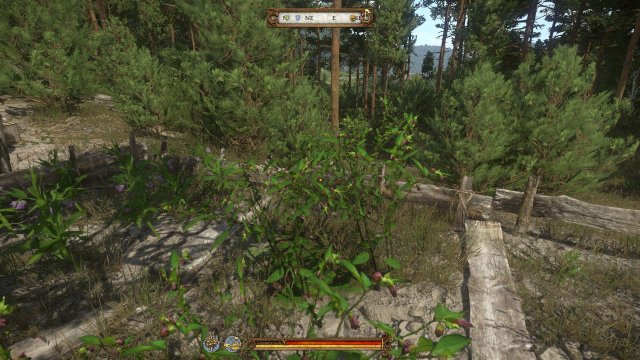 Belladonna is quite rare but widely used in brewing a lot of potions. If the supplies from those Alchemists cannot suffice, find them from the gardens. 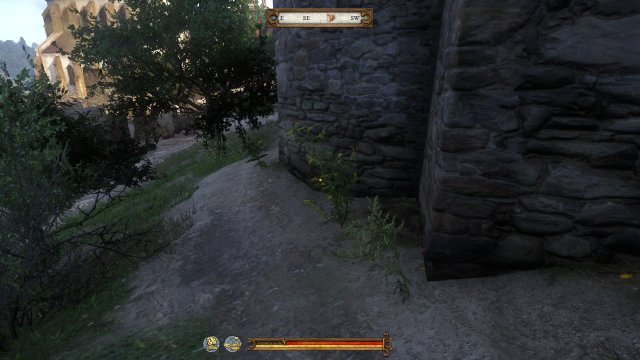 Wormwoods are basically everywhere but people can hardly tell them from common grasses. Pay attention to the yellowish colour at the top of it, you won’t miss it.

Yet you need not just herb but also other ingredients. Some potions require charcoal, boar tusk, antlers, cave mushroom and fly agaric.

Charcoal: Though there are charcoal burners all over Bohemia, you cannot actually purchase charcoal from them. Only merchants, blacksmiths and some Alchemists sell them.

Wild Boar Tusk: Not many merchants have them. However, as long as you don’t give a schnapp to poaching, head for the boar hunting spots on the map. Although it may take 4-7 arrows to kill a boar, the boar has a strange AI that never really want to run away. You will definitely kill it as long as you keep a proper distance.

Antlers: Merchants and Herbalists are likely to have them. You can also get it from male red-deer. They appear mostly near deer hunting spots and can be killed with one shot. There are two types of Antlers. One is carried by many NPCs, weights 4 pounds and cannot be allowed for auto-brewing. However you can still use it to brew potion. Another one weights 0.1 pound, can be harvested from male red-deer and purchased from merchants and Alchemists. Auto-brewing accepts this type of antler.

Cave Mushroom: They can only be found in caves. Luckily all caves in the game are marked. Herbalists also sell them.

Fly agaric: For some reasons, a few Herbalists may not provide them. They are mainly found within the dense woods. However, they are mostly distributed in woods near Samopesh and Merhojed.

The location of a necklace in a nest worth just over 1,000! I stumbled upon this very early in the game, just as I was doing the first quest in […]