Trams are only available with the purchase of the Snowfall DLC.

A tram sits between a bus and a metro. They are very similar, and operate much like buses except they have considerable advantages:

Trams are unlocked along with buses and even though they have nearly 15% higher upkeep cost, they provide an excellent buffer between buses and higher capacity transportation.

Put simply; they help your cims get to where they want to go a lot quicker.

Much like buses, trams only disperse from a tram depot once it is built, however unlike buses, trams operate on tracks which must be connected to your tram line (don’t worry there’ll be more on this later). As it tells you so here: 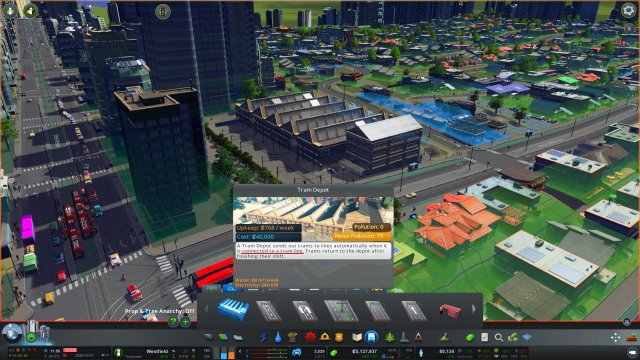 For now we’ll start with your depot.
Click on the “transport” icon in the services selection down the bottom. Select the “Trams” icon and click the first building which will be “Tram Depot”. Place the Depot wherever you like. 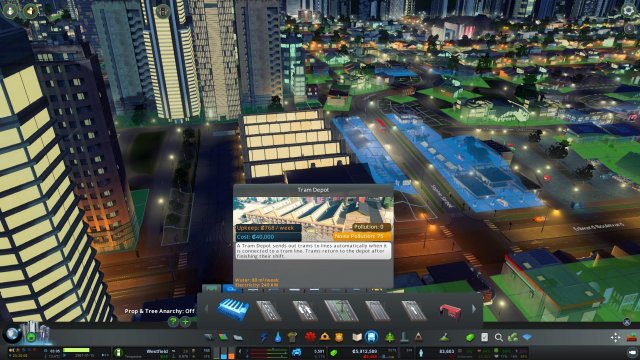 But remember this depot will eventually be connected to your tram line so place it where trams can gain access without causing headaches to your traffic. 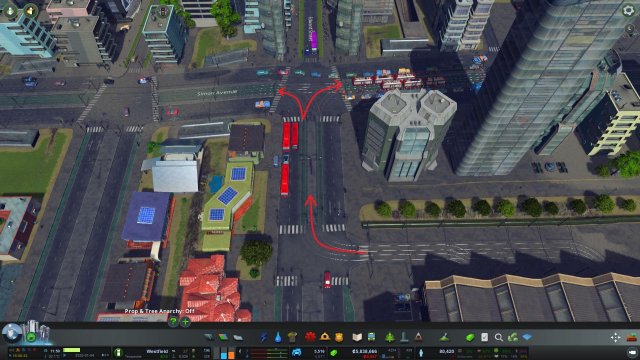 Similarly to bus depots, tram depots have nothing to do with routes stops or yours cims. It despatches trams, that is all.
Though, keep in mind it has a much higher noise pollution rating of 75, so be mindful with where you place it so you don’t upset those living around it. 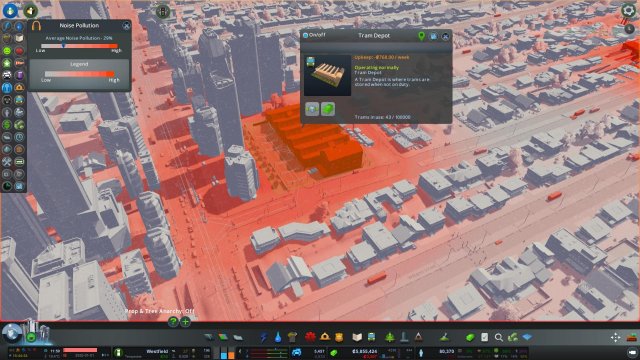 There is only one depot available at the moment costing $40,000 outright and $768 per week.

Trams have the option of: 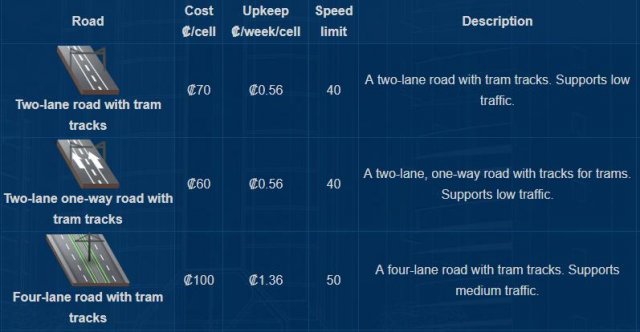 There are other roads you can download off the workshop but these are the standard vanilla options.

Tram only roads are only accessible through the Transport services tab under Trams. 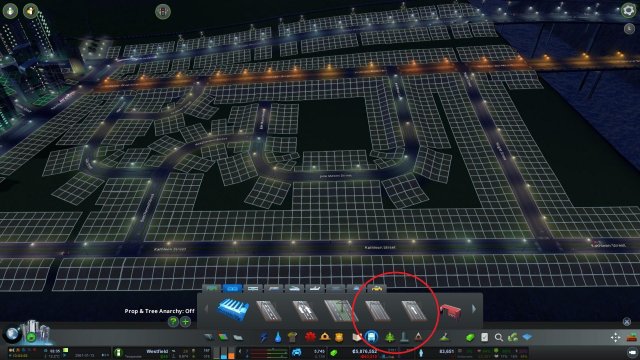 They’re created much like any other path or road network and are useful for a few reasons:

The roads with tracks built in are accessible either: 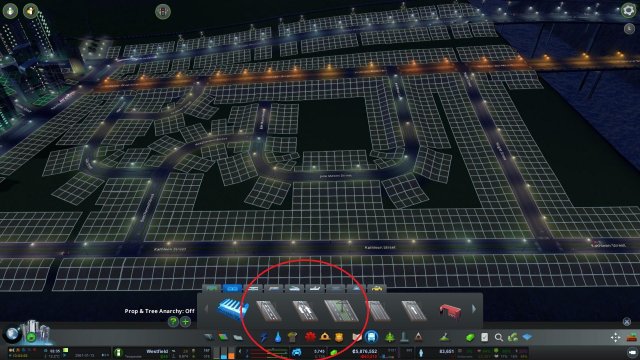 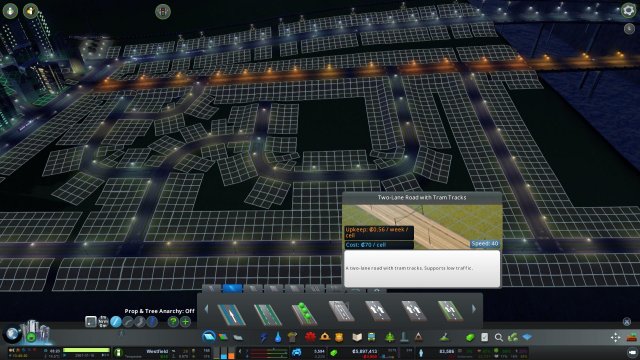 They’re fairly simple to use. Either:

Remember to link your tracks to your depot so your trams have access to it!

Tram stops can only be placed on roads that:

“B” only applies to one way roads with tram tracks as both buses and trams share that same lane. As shown below: 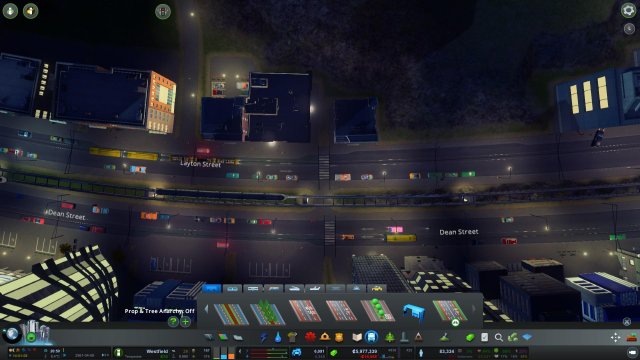 The tram stop being on the left, and the bus stop being after.
Bus and tram stops cannot be shared.

Creating tram lines are pretty straight forward. Click on the “Transportation” tab and select the “Tram” icon. Scroll to the end and click the “Tram Line” tool. 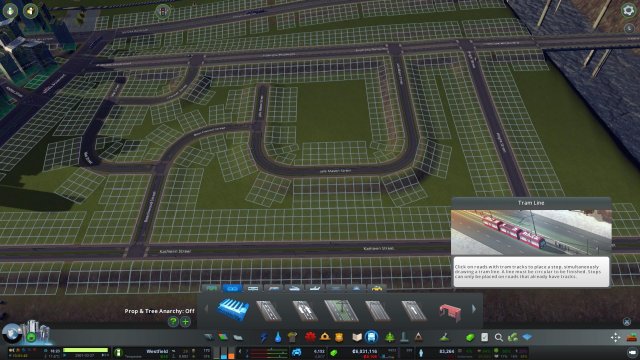 Simply click alongside any road with tram tracks to start your tram line. 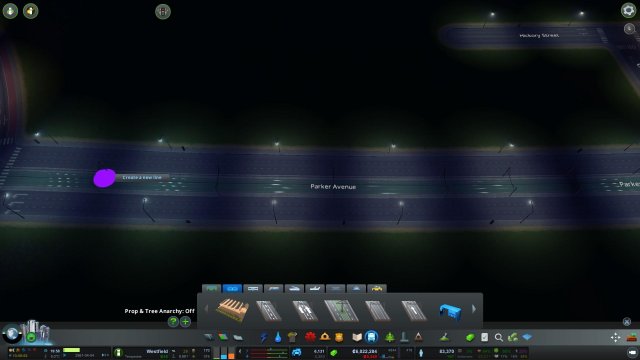 And, continuing along clicking alongside the road will then place down stops. 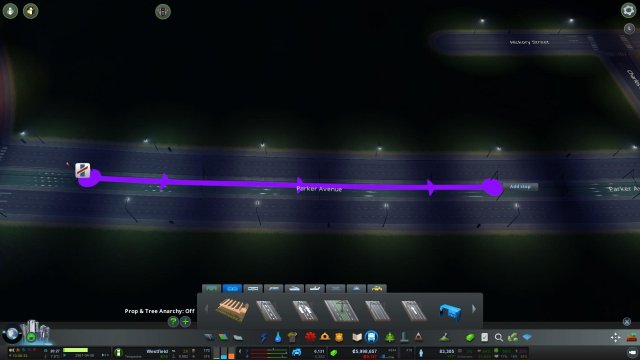 Keep in mind though to avoid placing tram stops near or right next to a major intersection due to the reason when passengers hop off the tram 90% will try to cross the road which isn’t fun for your traffic.

Line Length vs Amount of Stops

The distance between stops should be fairly vast, every 5-6 segments or so, and close to bus/ metro/ monorail stops to provide quick transfer. One tram stop can only handle 2 tram lines at the same time at max, provided the number of trams on the lines aren’t too high.

Remember a tram is twice as long as a bus, so if a stop starts to back up this can interfere with your traffic flow if the trams start to overhang through intersections.

Once you’re happy with your line, complete it by looping it around and making your last stop connect up with your first stop. The first stop will have an icon with a line crossed out indicating it is unfinished. All tram lines must be set as a “loop”. 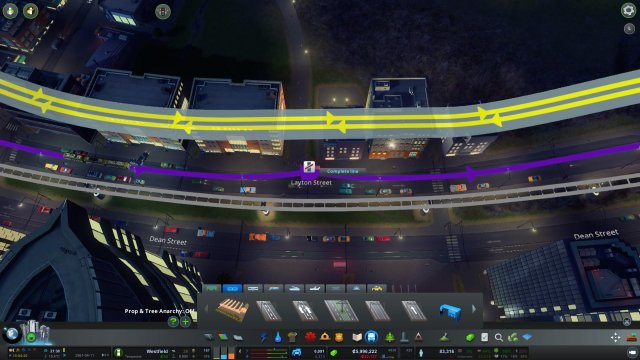 Once completed, the line will automatically start (trams will be despatched). Trams start their journey from the tram depot and will head to its’ assigned route, pulling into the stop of the first tram stop set.

In the unmodded vanilla game each tram has a capacity of 90 cims. Even though their capacity is not so great compared to that of other transportation, cims will still use them, especially if your road design is good.
Tram lines are like branches, they don’t cover streets but stretch through/ across/ around entire city blocks and districts in very straight circuits. 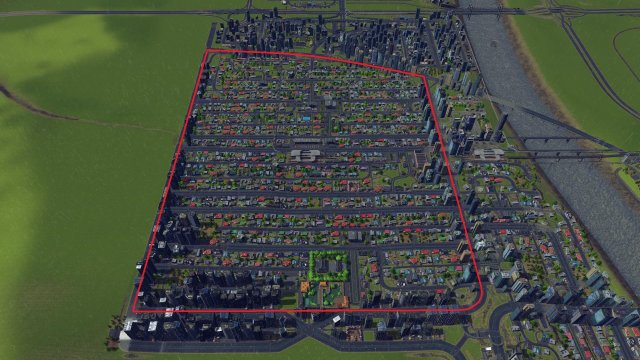 The red line being my tram circuit with lines running both directions.

They’re for inner city travel, collecting delicious cims from the first stage of transport (being buses) and quickly distributing them throughout the city and to the next phase of transport (whatever they may choose) and vice versa.

Without mods, once you have the ability to build incenerator plants and crematoriums you may find yourself wanting to get rid of the landfills and graveyards you have been using […]

I had assumed that a 10×10 grid was best, but it turns out it’s not. ContentsGuide to The Optimal Square GridIntroductionTime for MathematicsConclusionAppendix A: Medium or Large RoadsAppendix B: RectanglesAppendix […]