Bonuses in Death Wish do not have to be completed at the same time. You can complete one bonus without the other being obtained, and you don’t have to re-obtain them in order to earn the other.

There is no penalty for using Peace and Tranquility, asides from the consumption of certain collectables. The item used seems to change from Death Wish to Deat Wish; Beat the Heat requires 7 Yarn, for example, while So You’re Back from Outer Space requires 77 Pons.

Most importantly: pace yourself. This is a game mode you have to play off and on. Excessive frustration only leads to further mistakes, and being in a panic for too long (looking at you, Mafia Rift Collapse) isn’t great for your well-being. So listen to Peace and Tranquility, there’s no judgement in taking a break to come back later. This isn’t a game mode you finish all at once, so take your time.

Something I’ve noticed is that it takes 4 hits to turn a faucet shut. Whack it 3 times, wait a quarter second, then smack it and run- you won’t have to wait for it to finish and thus can bolt off hurriedly.

Without the video, here’s the process:

Just a good thing to note: this mission does not auto-finish once you complete the main objective. You can defeat all the Mafia first and then complete the others if you so wish.

Kill 5 Mafia without being punched: Just go to Mafia Town. This part is simple.

Kill 10 Pushy Crows without getting bullied: Go to the Alpine Skyline’s Birdhouse. Use the Time Stop Hat to navigate better, and never forget her homing attack. There should be enough to complete this bonus on the first go; if not, simply restart the level.

Kill every type of enemy: Let’s face it, you’re here for this bear. The types of enemies you need to kill are as follows:

So You’re Back From Outer Space: The Perfect Run

Use the Sprint Hat liberally! Abuse the Time Stop Hat if you’re having trouble with swaying object timing (just know it does not slow the timer, which you can see in the bottom right corner). Make sure certain Mafia don’t trip you up (in some cases, quite literally) and be sure you focus on only one of the bonuses at a time. If you fall at any point, just restart; you will not have time to make it in 65 seconds. You can make small slipups here and there (see video for proof) but more than 2 and you’re best off restarting.

Unlike some other Death Wishes, this one is just a straight gauntlet asking for gameplay mastery. As a result, there’s not much else I can say; actions really speaks louder than words here.

It took 37 more attempts but I managed to prove this Death Wish is completeable within 65 seconds, again! Re-recording hard Death Wishes like this is a pain.

Snatcher Coins are easy by default, in my opinion. You can equip the updated Compass Badge and find them with ease. Regardless, this is a 100% guide and I will post their locations anyway.

1. Atop the bell tower. To reach it, climb the Outer Space parkour area (but during the day, if it isn’t clear) and leap onto it. For perspective, there is a Rift Token at the end of the small section if you have not collected it already. 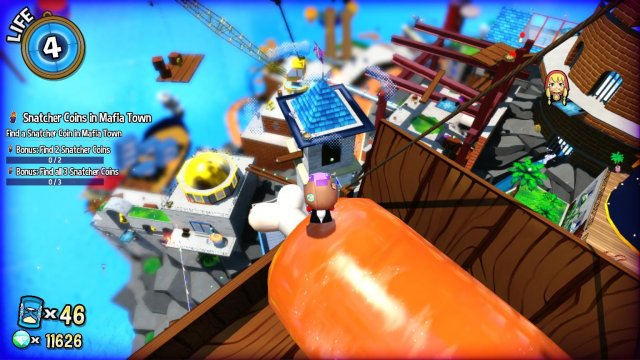 2. Near the end of the “Welcome to Mafia Town” level there is an unfinished tower atop the river, with the Shopkeeper standing atop it. If you go underneath where the river flows, you will find the Coin. 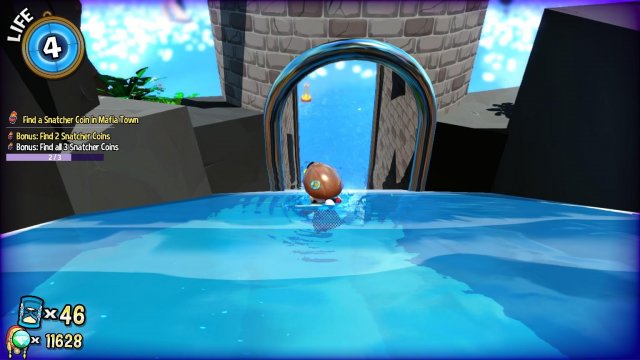 3. This can only be obtained by reaching the top of Mafia Town; thus, you must either beat “Heating Up Mafia Town” or start “Down with the Mafia.” Climb one of the golden Mafia statues in the front, then jump to either sun shade curtain. Leap atop the small statue’s perch, then jump atop the building; you’ll find the Coin in the center. 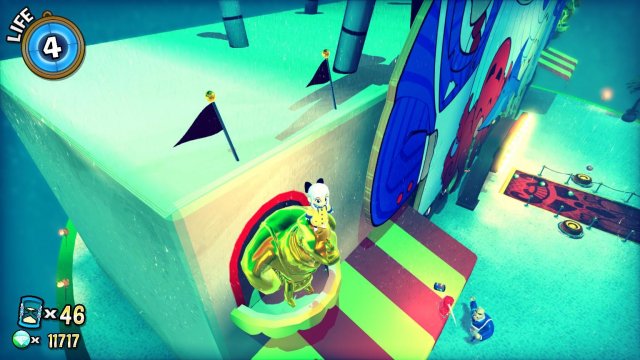 This challenge seems daunting at first, but in all actuality it’s far easier than it appears. Equip the Magnet Badge, the Sprint Hat, and psyche yourself not to panic. With all that squared away, you’ve already given yourself a fighting chance.

Collect-A-Thon has now been proven doable, and even better, my progression was proven to be lacking in any kind of optimization. Here’s some notes to help you, if you don’t want to watch the video.

The perfect Bonus run, you should check it out here:

This one is very straightforward, but this Death Wish is easily the most fluctuating in terms of performance. Your path through the town and treatment of interactions is a complex web of choices. Here’s the spiel:

And here’s my video showcasing a successful attempt:

Holey cow, and I thought the Collect-A-Thon was hard. In this Death Wish, you have to beat “She Came From Outer Space” without jumping more than 15 times. Thankfully, you can use the Ice Cap to short-hop; unfortunately, the hop height is inconsistent and varies drastically with even the smallest timing. Here are some important notes:

Here’s the video for this! By George, this one is hard to get until you see it in action.

Vault Codes in the Wind: 2fast4u

This is an interesting time challenge. You may think 30 seconds is way, way, way too short to obtain all 4 Codes, but there’s a couple interesting addendums that will make your life a lot easier. For you see, every time you collect a Code, the timer resets back to 30 seconds, and the Time Stop Hat affects the clock this time! Additionally, like many other Death Wish Bonuses, the two for this Death Wish are strict opposites of one another; you will not find the time to kill 10 Mafia without the Time Stop Hat, and vice versa. So pick the Bonus you wish to go for and stick to it.

Something also key to keep in mind: the timer ends once you open the Vault, so don’t panic about having enough time.

Follow the same steps as Finding the Time, but without beating up the Mafia. Before you collect the first Code, be sure to stand on the boat where its movement turns back around, and collect it there for more time.

You do not have to complete this Death Wish to earn the Bonus, merely defeat 10 Mafia before time runs out. So if this run is too much to finish as well, know it’s not exactly a tryhard effort. Just be sure to wear the Fast Hatter Badge and spam the Time Stop Hat at every possible opportunity!

The Bonuses for this Death Wish rapidly jump between “oh I’m probably going to get that on my completion attempt” to “holey crap you unholy swine I’m not a masochist.” Specifically, the first Bonus is never missing your attack cue; that is, you always hit him every time the Mafia Boss turns blue. The second, however, is completing the boss fight with the One-Hit Hero Badge equipped. No one is going to fault you for defaulting to Peace and Tranquility to get this Bonus. Heck, for this 100% guide, I downright recommend it; I’m doing the same myself.

Much like “So You’re Back From Outer Space,” this Death Wish is mostly about mechanical mastery. Here are some tricks I’ve found:

After some observation, I’ve noticed the Mafia Boss follows a certain behavioral pattern for when he starts using attacks, and the scaling involved with said attacks. Here’s the breakdown:

A Hat in Time – Some Tabs (Songs) for the Ukulele Mod

Made a couple of tabs for the ukulele, figured i might as well share em’ here. The Songs “|” means a brief pause, timing depends on the song. Never Gonna […]

Spooky times are around the corner for Hat Kid, and now she’s in the Snatcher’s home turf no less. Run, jump, dive, and clutch your soul tight, because tonight’s haunt […]