Crafting in Thea 2: The Shattering isn’t quite the same as crafting in any other game (including the original Thea). There are a few basic concepts that can help you get up to speed quickly, and which I’m guessing won’t change much during the course of Early Access. This is the first crafting guide for Thea 2, covering gathering, equipment making, building construction, and cooking. Along the way, I’ll explain what essence is, and how to choose which materials to use for your creations.

Resources can be gathered from within one hex of your group, once it has set up camp. So, if you set up camp here:

Then your gathering screen is going to look like this:

Notice that even though I have 5 characters in my group, only four of them can do any gathering: only two characters can collect from any given node. (Unlike in Thea 1, both characters get to use all of their gathering points. The guy with the beard hasn’t had his gathering points halved, it’s just that he’s a warrior, and the other one is a gatherer.)

Fruit nodes each need 70 points worth of gathering activity to deliver a bag of fruit. You can also see that each bag of fruit has four units of fruit, and that I have zero fruit currently in storage. In the top node, my workers add up neatly to 140 points, which means I’ll get two bags of fruit from that node. The hourglass shows that I’ll get some fruit at the end of this turn. In the bottom node, 65 gathering points won’t get me anything this turn, but I will get something next turn, so the hourglass shows that it’s 2 turns before I get anything.

At the end of the turn where I get something from the bottom node, I’ll have 60 gathering points left over, so once we get started, I’ll be getting 3 bags of fruit per turn for 12 turns (if I decide to stick around that long). If I break camp, then I will lose any gathering progress from previous turns .

Different items come with different numbers of gathering points needed, and different bag sizes. So if I was going to go mining for malachite (400 points needed), then I’ll probably want to make myself a gathering tool.

If I click on the Crafting button, I can see what I can craft using my starting supplies: 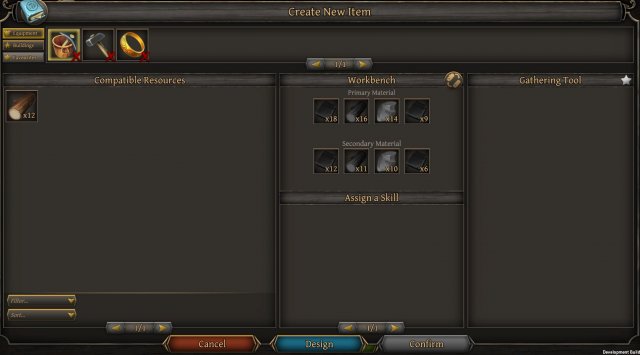 My 12 units of wood is not going to do the job, because I need to set a Primary and a Secondary ingredient, and if I’m going to use wood as my primary ingredient, I need 16 units of it. Fortunately, the design button is here, which allows me to see what outcomes I would get if I used ingredients that I don’t have. The cheapest solution would be to go with leather. 9 units of leather in the primary slot, and 6 units of leather in the secondary slot, and I’ll be ready to make a gathering tool! 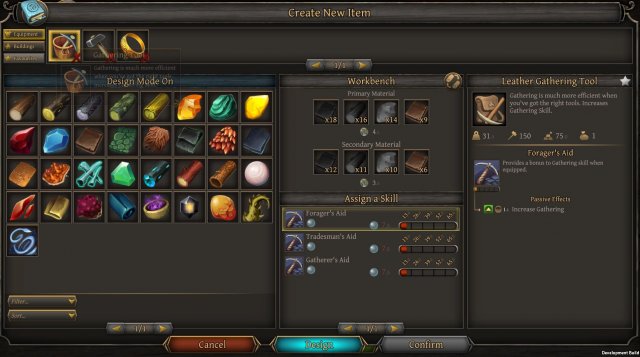 There’s a lot you can see in this image (especially if you click on it and see it full size). 9 units of leather as a primary ingredient is worth 4.5 units of essence. 6 units of leather as a secondary ingredient is worth 3 points of essence (because leather is worth 0.5 essence per unit). In the ‘Assign a skill’ section, you can see that this adds up to 7.5 units of essence, and that the bar is red. The minimum essence required to fill the first part of the essence bar is 13: I can’t actually make this item using this recipe, because there’s not enough essence for a level 1 item. Therefore, the Confirm button is grayed out.

My particular tribe knows two ways of making a gathering tool out of leather (your tribe may vary). If I switch to using lots of leather in the primary and secondary slots, then things improve: 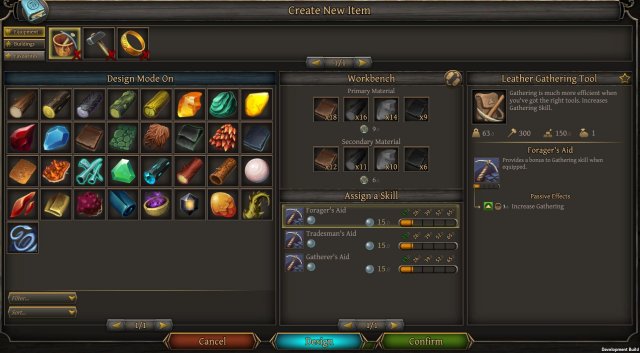 15 units of essence gets me parts the 13-point barrier, and (if I had the ingredients) this recipe would work. This particular “Forager’s Aid” gathering tool adds 3.6 points to the Gathering stat, which means 36 gathering points per turn. That’s a pretty meaningful early game upgrade.

Notice the red line drawn through the leather ingredient: I need 30 units and I have zero.

Note that tool making is portable. You can move from place to place while crafting equipment, and your crafters will keep working on things as you move about.

And that’s the basics of making gear: you can click through the available skills to find different powerups that you can give people. And if you ever manage to skin the snake that defends the World Tree, you might just be able to make a really high-quality leather gathering tool! 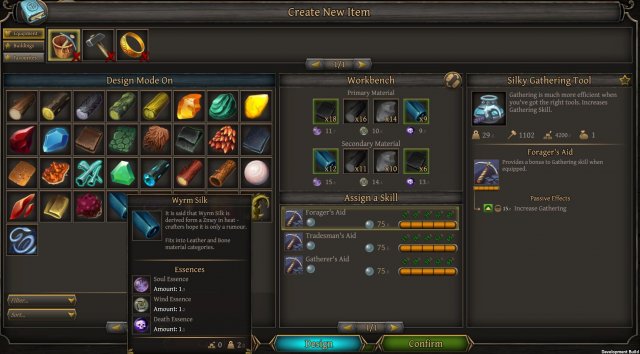 A somewhat more practical way of getting a gathering boost is probably to make a settlement.

Building a settlement is pretty much the same as building anything else, except that you go to the ‘buildings’ tab and select ‘totem’. 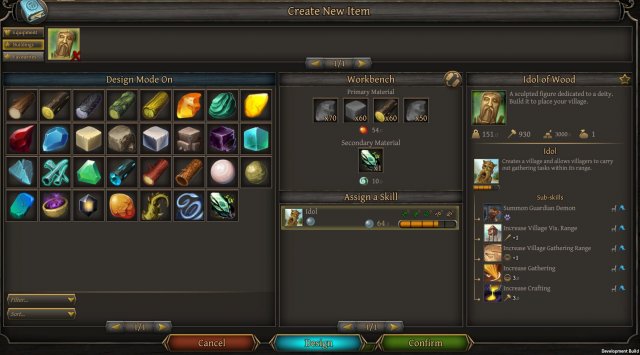 It’s a really good idea to use the Design view to see what bonuses your village will get from the totem you build: cosmic seeds are hard to come by, so you’ll want to think carefully about the resources available in your area, how much you’re going to need, and what you’ll get in terms of village bonuses. In the Kickstarter Early Access, I found that I like Dryad Wood because it’s not too hard to gather and it gives me a gathering radius of 2 around the village, with some nice gathering and crafting bonuses. This is very likely to be rebalanced, and there are some random numbers (which change on a per-playthrough basis) that influence it too: go to the design screen in your playthrough and give yourself a few minutes to decide what you want to do.

Unlike making a tool, you can’t move around while building a building.

Once your settlement is built, everyone in the group that built it will automatically move in.

Meals are basically tools that you eat.

You set a primary ingredient and a secondary ingredient. The combination determines exactly what you’re making. (In this case, a sandwich.) 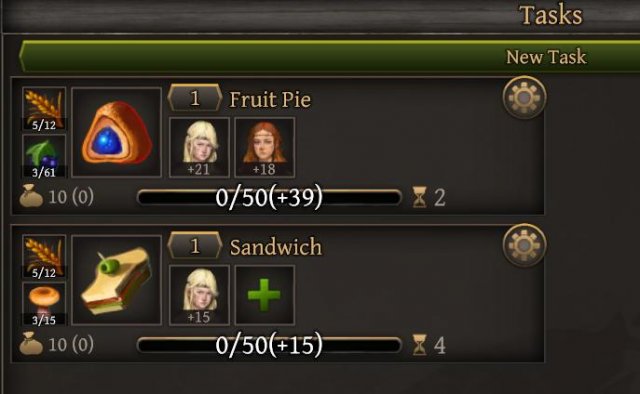 A variety of cooked meals is good for morale, so it’s well worthwhile to make lots of batches of lots of different meals.

All gathering is done using the gathering skill. All crafting is done with the crafting skill. The number of points that a character will contribute per turn is equal to ‘relevant stat * 10’. 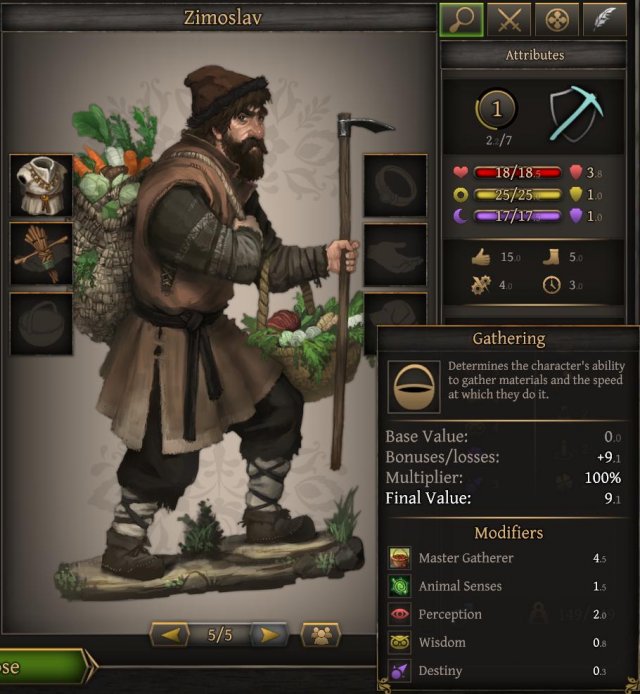 All in all, he’s a pretty efficient fisherman.

He’d be better if he had a gathering tool, of course.
The same principles apply to the Crafting skill, which is the skill used for cooking.

Thea 2: The Shattering – Tips and Tricks for Getting Started

Before you play the Thea 2: The Shattering game, you will definitely want to know these simple but useful tips and tricks. If you have any tips feel free to […]

Thea 2: The Shattering – How to Get Free God Points

A bug in the 13 February 2019 version of the game. Other Thea 2 Guides: Introduction to Crafting. Beginners Weapons Guide. Ringbearer Blues (Other Ring). Concept Challenges Made Simple with […]

This guide will explain some basic concepts about weapons. How damage calculated? What is the difference between different weapon types? ContentsBasicsSwords and GreatswordsClubs and MalletsHatchets and Battle AxesSpears and PolearmsRanged […]