This guide will explain some basic concepts about weapons. How damage calculated? What is the difference between different weapon types?

There are three types of challenges in Thea 2 where you can use items (weapons):

Most of basic weapons you will see in early game are used in Fights – a Physical challenge, where you are actually trying to kill opponents and they are trying to kill you. Characters use their weapons and skills to inflict damage. Sounds easy? Not so fast 🙂

You may notice that same sword equipped by different characters deals different damage!

Let’s look closely at some weapon. 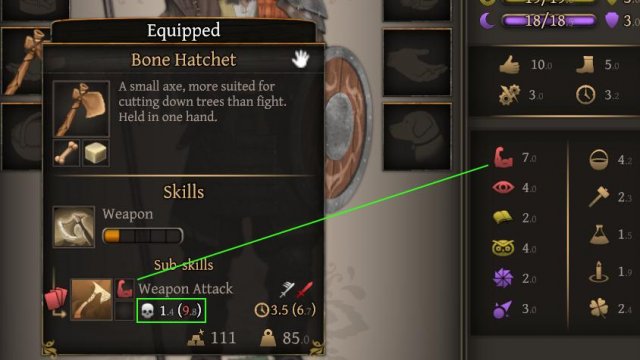 Number after skull is damage multiplier – 1.4 in our case. It is applied to the attribute linked to the skill. For most basic melee weapons this attribute is Strength.

But there are exceptions to this rule! Some weapons scale differently. Check out this Amber Spear: 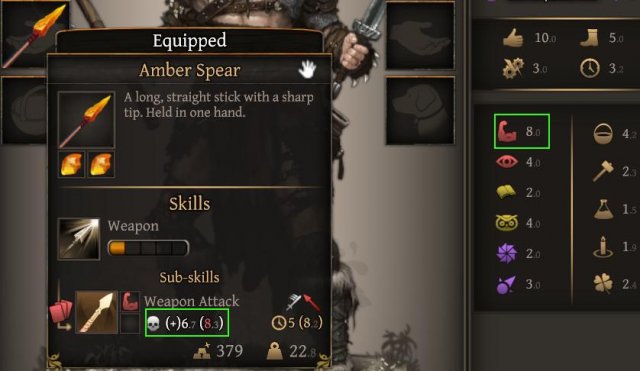 Do you see this small “+” after skull? This changes formula completely. Instead of multiplier – you’ll get an addition. Attibute (Strength) is still applied but to very small extent.

Those weapons can be very useful for characters with small attribute linked to the item. Your mage can now poke enemies with this Amber Spear and do some decent damage!

But damage is not everything!

Another important aspect of the skill (weapon) is Delay. All cards act in battle based on the delay. Some weapons are faster then other so you may kill you opponents before they can even hit you.

This where you can see the delay: 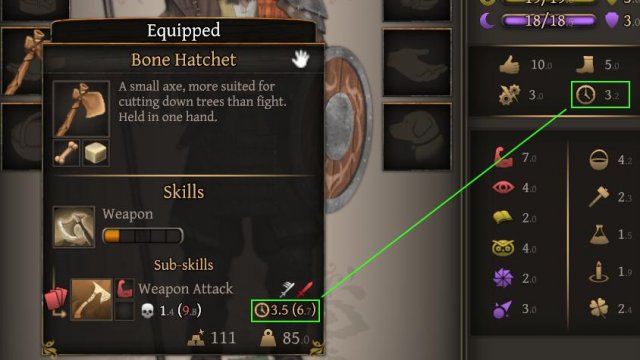 They both melee weapons, which means you’ll need to put your card in FIRST ROW to use it.
One-handed and Tho-handed swords have some important differences, so I’ll explain them separately.

Swords have a passive ability – Shielding. They provide shield in the challenges. It is a renewale protection that is expended before hit points.

One handed swords have the HIGHEST SPEED in the game and the LOWEST DAMAGE multiplier.

One-handed sword can hit only one enemy – the closest one. Advice – use it by your tanks in early game when you don’t have much armor.  Also it allows you to have a shield to further increase tankiness.

Their main feature is attack pattern.
Due to high speed and this splash damage your warrior can wipe out narrow battlefields before enemies can act.
Note that splash damage (by default) deals 50% of original damage. Some mid-late game weapons can change that.

These are slow weapons with T-Shape attack.

That makes hammers a good AOE. This is how works.
Warrior will deal 10 damage to the Boar and 5 damage to each adjanced card (if there will be). 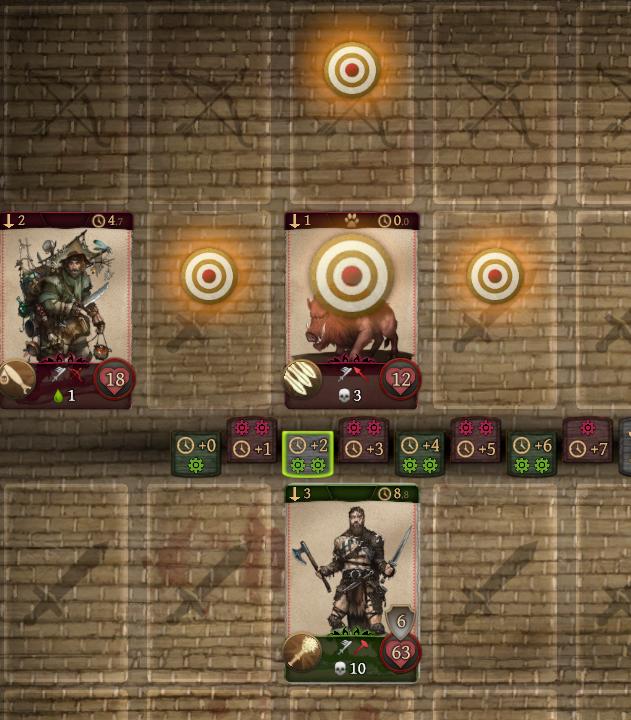 Axes have the HIGHEST DAMAGE and FAST SPEED in the game.

So what is the drawback?
Why not use it all the time?
It all about damage mode. Single melee only.

Playing with axe (especially 2-handed) might require you to have a good armor for protection.
Also it might be a good idea to put your axemen after enemy placed some glass cannon at their front line, so your damage potential won’t be wasted on some meat shield.

They have two main advantages over other weapons.
Vertical splash allows you to hit enemies at the back line. 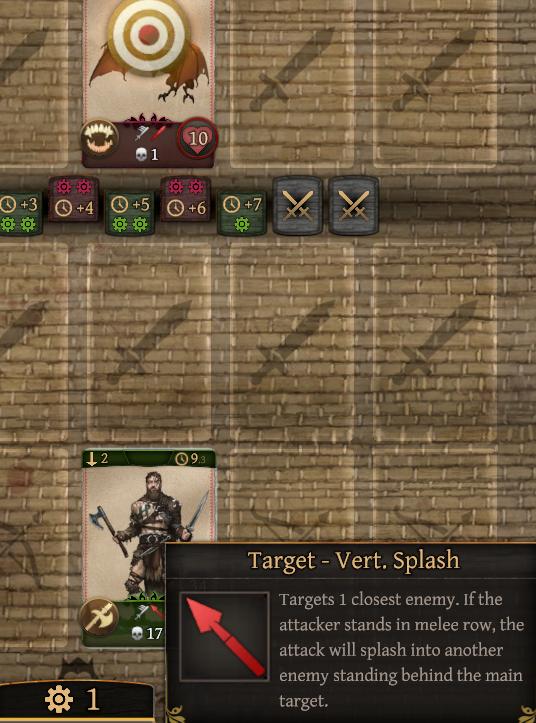 There are 3 types of weapons in this category: Bows, Wands and Javelins.
All of them allow you to put card at the SECOND ROW of the battefield – behind your melee characters.
In other aspects those 3 types are quite different.

Unlike basic melee weapons, bows scale with Perception instead of Strength.
Give it to your Hunter or Gatherer – they usually have good Perception.

Bows have LOWEST DAMAGE multiplier and LOW SPEED.
But cool part about them – you can aim if there is no one in front of you.

Note: Crossbows are no different to Bows from game mechanic point of view. If you’ll try to craft a bow from metal – you’ll get a crossbow.

They also scale with perception, but oh boy they hit hard!
Javelins have HIGH DAMAGE multiplier and the SLOWEST SPEED.
Their main drawback – they are not really “ranged” weapons.

If you hover mouse over wand you see that description is changing between two options. 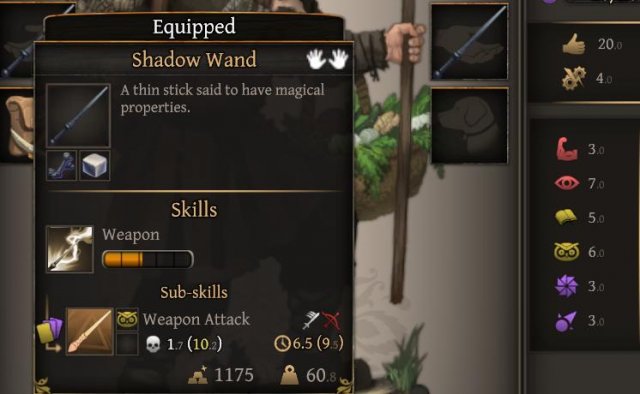 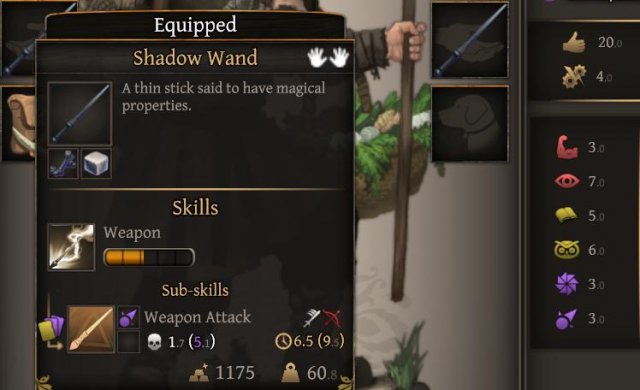 Also you may notice that cards icon is different.

If you remember beginning of this guide, I mentioned that there are 3 challenge types in Thea 2 (in fact there are 6, but let’s keep it simple for now).
There are Physical (RED), Mental (YELLOW) and Spiritual (PURPLE).
All other basic weapons we discussed so far can only be used in Physical (RED) challenges. And you’ll see RED card icons next to corresponding skill.
Wands can be used ONLY in YELLOW and PURPLE challenges.
And what is more importantly – different attributes will be used to scale damage in those challenges!

It is very important to understand that your mages wearing basic wands will be useless in RED fights.

Wands have AVERAGE DAMAGE multiplier and the LOW SPEED.
Just like bows, wands are ranged weapons that will allow you to choose you targets sometimes.

This guide is going to help you understand Thea core mechanics and equip you with tools that will allow you to explore its world. I don’t want to tell you […]

Thea 2: The Shattering – Planning Your Game

After playing this game for hours, I want to share my thoughts and how I would approach this game. This guide works amazingly well till Tier 4 materials. Which I’m […]

Thea 2: The Shattering – Concept Challenges Made Simple with Debuffs

This is a relatively universal strategy for Concept Challenges (the ones where you don’t sustain injuries) taking full advantage of debuffs. It’s very easy to use and the same build […]