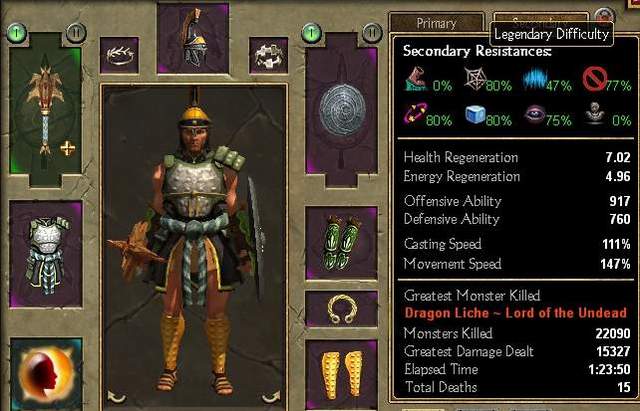 Defense Mastery (AKA The Tank)


Batter will server as your RMB attack. It’s on a cooldown so it’s not something you can spam so you’ll be using Onslaught when it or Shield Charge is on cooldown. With a point in Rend Armour you’ll be able to hit three targets in a 160 degree arc. Decent for dealing with groups but remember that it has its limitations. Max out Batter to buff the base skill and Rend Armour to reduce armour on enemies.

Adds a chance to stun with axe and mace. Obviously, if you’re not using an axe or mace as your one hander the skill is useless. If you’re are using one then the stun can be useful. I maxxed out the skill in my build but the skill isn’t mandatory, more nice to have. If you’re looking to free up your points to put into something else then this is one you can bypass.

Aura that buffs armour and defensive ability. I only dropped a single point into the base skill. The base skill is okay but not mandatory while the synergy skills are more useful imo. Iron Will gives you all the secondary resistances you’ll need and Focus gives you extra passive shield block chance.

Provide an emergency heal on top of your potions. I dropped one point into it early on and forgot to remove it later. Rally really needs to be maxxed long term if you decide to use it so it heals enough to be worthwhile. I had too many other skills I was interested in, the skill can be nice to have but not mandatory.

Good one point ability. Gives a nice boost to absorption and block for a limited time. Good when fighting crowds. If you have spare points you can put more into it but even with one point it’s pretty useful.


Charges an enemy. Drop one point into the base skill and pump up its synergy skill Disruption first.
Good way to get into melee range of casters and archers quickly, hits multiple targets, short stun and skill disruption. You can drop more points into shield charge when you have free points.

This trio of passive skills should be maxxed out. When attacking with Onslaught (or basic attack, Batter / Shield Charge will not trigger) and a shield equipped, you’ll get the chance to trigger their effects (reduced defensive ability, slower attack and 3 target reduced OA / skill disruption respectively). When they trigger, you’ll do your normal weapon damage + the skill effect / damage.

Grow to a large size and provides you with some substantial buffs. Great one point wonder anti-boss skill. Downside is the six minute long cooldown, the large size makes you harder to navigate and you can’t enter caves and such. Unless you have substantial recharge reduction you’ll want to save this for bosses and major fights. With extra points you’ll get more damage absorption and strength.

Warfare Mastery (AKA The Spank)

Boosts your offensive ability and attack speed. Nice passive to have, max it out

The Ignore Pain synergy buffs your physical and pierce resist. At 10/6 you’ll gain +20% to both. You’ll only have the buff when you have at least one Onslaught stack on. The physical resist is more useful as it’s harder to get than pierce resist. If you need points for something else, this is something you can pass on as it isn’t really a huge buff overall. You just need a single point here to unlock the later, more useful synergies.

Hamstring reduces defensive ability, armour and speed while Ardour increases movement speed and attack speed while you have at least one stack of Onslaught active. Max out both of these synergies.

Dual wield is a rather useful ability in Warfare that lets you attack with two weapons at once. Obviously, a skill designed around attacking with two weapons will clash with skills that require shields. You are able to swap easily between two weapon load outs (‘w’ is default keybinding) so one can swap between a one hander + shield to dual weapon fairly fast. However, dual wield require a lot of skill points invested to become good. If you want to dual wield you should play a build more focused on that. Harbringer or Assassin come to mind.

Increases your chance to dodge melee attacks. Worth dropping a couple of points into at least and can be maxxed if you feel like it.

One point wonder ability. Applies a short stun to all enemies within range. Useful when you’re fighting a big group to give you time to clear some first before you get mobbed, keep ranged enemies form running away or to interrupt annoying enemies (ex: casters or big damage dealers). Further points into the skill will increase the radius of the spell and the maximum stun length, however, the min stun length is always 1.5 seconds so it can be fairly inconsistent. Whether you want to invest more in the skill is up to you but a single point is effective.

The Doom Horn synergy skill is more valuable to put points into imo as it will debuff enemies’ health and armour in addition to the base skill’s stun. I wouldn’t say it’s mandatory through. Drop a single point into the skill and buff a little with +skill items or max it out depending on how you like the skill.

One of the best skills in Warfare, Battle Standard will give you huge buffs if you’re within its range. With one point, you’ll get +1 skills, half-energy costs, a bit of damage absorption and some offensive ability and extra damage. Maxxed out, you’ll get excellent damage absorption and even more offence. The Triumph synergy skill should be maxxed out as well and will debuff nearby enemies’ physical damage, physical resistance and stun resistance. This will mean you’ll take even less damage from them, your attacks will do even more damage to them and your stuns (from concussive blow and war horn) will be resisted less.

Battle Standard has a cooldown of 60s and only lasts 36s when it’s maxxed. If you can get some recharge reduction then this will allow you to get it out more often. Also, as it’s stationary, you may need to lure enemies towards it to get full advantage. There’s a noticeable difference between it being out or not.

War Wind is an another charge attack. It has a 360% degree arc but does terrible damage unless you drop tons of points into it. The base skill hits four targets at the beginning through and the Lacerate synergy skill will let you hit additional targets and add a bleed. It’s a bit redundant when you already have Shield Charge which I think is the far superior option overall. I would suggest passing on War Wind and using the points elsewhere.

Pretty effective with only a single point. Summon a trio of spectral minions to help fight for you. It has a long cooldown so will mostly be used for boss fights. The skill synergizes well with Battle Standard. Additional points will make the minions better and increase the number of spectral minions summoned. I only used one point in the build as I had other skills I thought were more important.

So what should you be dropping your attributes into? 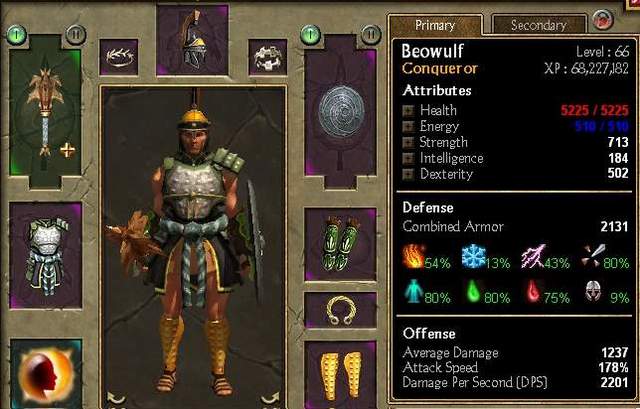 As you’ll be in the thick of things you’ll need to keep your resists up. This can be a bit of a pain in legendary. You can get away without resists in early normal but you’ll want to start building them by act 3 and definitely by act 4. By Epic you’ll want ~40% to all resists, legendary ~50% at a min if possible.

+4 all skills will allow you to max out ultimate levels on all your vital skills but is less important than getting your resists. If you need more damage just equip a better weapon. Try to max out resists against certain bosses and zones. For example, if you’re fighting Cerberus in Act4 you’ll want 80% poison as that’s basically all his damage except for some physical. Having a few rings in your stash can allow you to change your resists as needed on the fly.

You’ll burn through your mana fairly quickly using shield attacks but pots are cheap and you should just carry multiple stacks of them instead of worrying about getting mana or regen gear. Health is more useful as if it hits zero you die but still low on the priority list.

When leveling, a green weapon with a good prefix/suffix and socketed with a charm/relic is usually much better than any epics/legendaries for your level.

Use whatever good all around shield you have. If you have another shield(s) with good buffs to a certain resistance(s) then you can swap for certain bosses and fights.

Defence is pretty nice but a little slow at the start. I’d suggest going with Warfare at the start. Put some points into Onslaught for your LMB attack and so you can build up stacks on it in combat. Drop a point into Weapon Handling and work up the tree. Point into Dodge Attack, War Horn and Battle Standard.

At level 8 you can pick up Defence. Drop a point into Batter for your RMB attack, Battle Awareness and Armour Handling. For the time being leave them at one point and level up your mastery for more stats. Drop a point into Quick Recovery for dealing with groups and Shield Charge to counter ranged.

From this point work your way however you want. +skill items will be very useful early as it will allow you to level the masteries and use the +skill items to bulk the skills for the time being until you have unlocked all the mastery points. Unlocking the masteries will give you access to more abilities and more stats.