The Confederation for Peace Overwatch, from now on the “CPO”, writes the next report based in the witness and declarations of anonymous individual in the Great War, from now on “the war”, been fought between the Colonial Legion and the Warden nation.

This report, or guide, details and explains many tactics used in the war from both belligerent factions, in order to understand their ways to fought war in case of execute the “Peace Enforcement Protocol” for the safety of the Confederation peacekeeping force.

Narrative aside, this guide is for you player, it has a few tips and tactical ideas to help anybody enjoy the foxhole experience. Remember as tactics, during the conflict many things can go wrong, is up to you be ready to face those odds and achieve victory.

While the CPO has succeded in stopping the creation or supplying of weapons class 6 or higher class to both factions [Consult “Weapons class 6: Destroyers, aviation, underground warfare”], we have not been able to stop their total war economy and research in class 5 or lower weaponry, becoming self sufficient, and we have clues of many nations non alligned to the CPO trading weapons and tech to both factions [Consult “Report: Colonial-Warden Great war, foreign supplies”].

This is the list of weapons manufactured and deployed in combat.

A low caliber sidearm [Consult “9mm ammo and its effects in the body”] every conscript and volunteer is armed with one, even officers. While it can be easily outgunned, the low rate of fire and difficult to aim of many larger weapons, give a good chance to this gun if properly used.

7.62 mm bolt action rifle, used widely by both factions, it has a stopping power, only requiring two shoots to kill any soldier in the field. Also has one of the longest ranges for a non indirect weapon.

Its been confirmed the use of the rifle with grenade launchers and bayonets.

Using buckshot ammo, its devastating in CQC [Consult “Urban warfare and night combat”]. While its spread and low rate of fire are its weakness, it can easily outmatch anybody in 1v1 gunfights at short distance.

Its a low caliber rapid fire weapon [Consult “9mm as rapid fire ammo”], with a high spread as a main weakness, in short to medium combat if aimed properly in burst can outgun many weapons.

A .44 magnum, called by some users has “the handcannon” [Consult “CPO vote: Is magnum ammo legal in warfare?]. With the same power has the rifle, is a short range, easy to wield weapon, in good hands can land many shoots in short time.

7.92 mm bolt action, longest direct range weapon for the infantry in the war, difficult to aim but can easily disable or kill anyone with one bullet, possibly because of a Hollow Point modification or Cross Point made by the soldiers [Consult “Witness report: Abandoned Ward, the Stalker and its 37 confirmed kills].

With higher rate of fire than the rifle thanks to its semiautomatic reload-fire system, its a common weapon swap of the bolt action rifle.

Used in vehicles and wielded by the infantry, the colonials and warden manage to find a way to use it without a two soldiers team. It must be deployed first, and has a limited arc of fire, but can destroy structures and land a huge amount of damage to the infantry in a very short time thanks to its 12.7mm ammo [Consult “Witness report: Saltbrook Channel mass charges-mass casualties].

Its a bulky weapon, loaded with high piercing 13.5 mm rounds, it can do heavy damage to vehicles [Consult “13.5mm, Can be improved with HE charges?”] and used mostly as a defensive weapon. This soldier sized gun must be deployed like the HMG in order to be used.

With a 7.92mm ammo, its one of the most advanced and complex weapons deployed for the infantry, it can fire in two modes Single and Automatic, making it a very versatile weapon. [Consult “Thesis: Storm Rifles is the future of infantry warfare”]

Like the HMG, the factions managed to fin a way of using it without a second crewman, while more difficult. It can lay siege with heavy explosives, easily destroying fortifications or formations of enemies.

Firstly used for anti vehicle purposes [Consult “Witness report: Overkill”], it can destroy structures quickly and do heavy damage to vehicles, even the most armored ones, yet costly, used wisely it can turn the balance of a siege rapidly.

A explosive hand held explosive, it can be used in the grenade launcher of a rifle, due its shrapnel it can provoke disastrous damage to the human body. [Consult “Description of Colonial-Warden war Grenadier Brigades”].

Once it explodes, creates a dense cloud of smoke, harmless to the human body, used to conceal or block line of sight. [Consult “Witness report: Fall of Mercy Wish to commando’s group”].

Perhaps the most horrible weapon in moral terms, it violates many treaties of the CPO [Consult “CPO White and Black Pact: Chemical Warfare Restrictions”]. Of extreme concern, we have managed at least to stop the escalation of this kind of weapon in the war, only present as a hand held grenade format.

It deploys a green smoke cloud for a few seconds, and while the filters of gas mask can protect the user, the extreme corrosive quality of the gas will easily burn out the filter. Without protection the victim will die in two to three seconds [Consult “Green Ash: Diphosgene and Chlorine detected]. both factions use it widely, in defense and offensive ways.

As the name suggest, its a contact grenade with a huge explosion, capable of destroying structures and damaging vehicles easily.

Its a heavy grenade, with a short fuse. Both factions managed to research a sticky component similar to some sort of dense glue [Consult “CPO report: Shortage of bubble gum and increase of sticky bombs in the Colonial Legion and Warden nation, relation?] this let the grenade attach inmediatly to vehicles and explodes, causing severe damage thanks to its piercing material.

Very heavy explosive, but it can destroy many structures with one or a few more detonations, used by sappers, has a timer and a big radio of explosion, and must be deployed carefully first.

While we managed as CPO to stop the supply of this mine some time, both factions has managed to create once again their own variant, even more lethal to vehicles. Explodes after heavy pressure, or can be deactivated using a multitool wrench.

Narrative aside: This section will show many situations, many are quite common, and a possible solution for it.

With the help of a witness and in situ observations, the CPO can describe and know many tactics used during the war by both factions. While sometimes tend to evolve into mechanized warfare, most of the war its about attrition, whoever breaks first, lose. Its the reason of mass casualties.

Everyone and everything has a line of sight, while you can still shoot without being able to see anything, think if you are wasting resources and giving your position free. But the enemy garrisons CAN’T, so you can easily smoke them in order to sort the defenses or destroy them. Depends where you throw the smoke, the line of sight will be interrupted, allowing you and your team more or less movement safe zone. Like in this example: 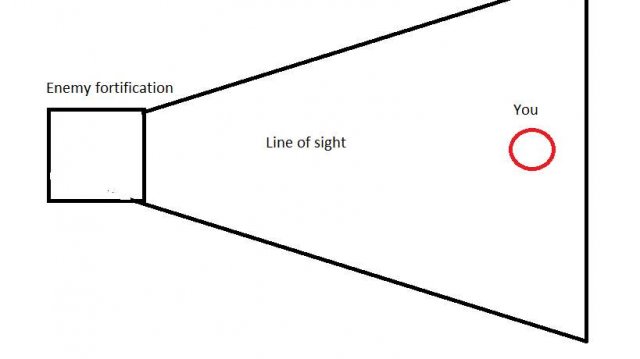 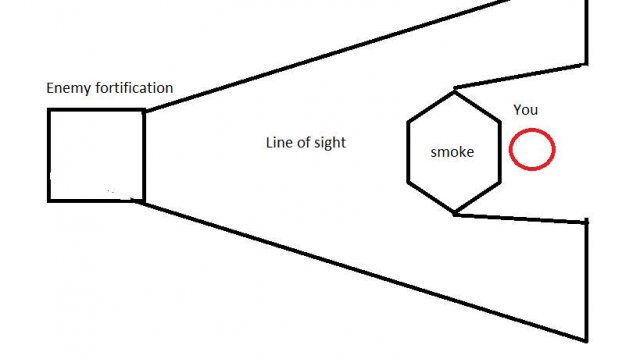 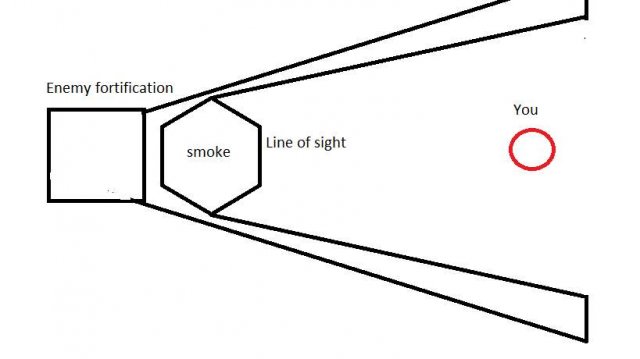 Smoke is used to blind or negate a sight of a certain zone for a short time, while we as humans can think “Ey in that smoke cloud must be something going on” we are not 100% what or in which part of the cloud.

Its a pretty straight forward tactic, pick a vehicle, charge the enemy sandbags. The easiest way to destroy sandbags its driving over them. So both factions use the cheapest vehicle and expendable vehicle at their disposal.

Vehicles can prove extremely useful in combat, but alone, not even the might of a tank can hold, so the infantry must protect the vehicle. The ideal number is 5, three in the front and two in the back side. If this can not be possible, the sides and the rear are always the most vulnerable parts and must be defended at all.

A mix of of 3 long weapons like rifles or carbines, and 2 CQC like SMG, shotgun and revolver must be carried by the escort team, the CQC primary target must be any soldier who aproach the vehicle, no matter what, and the long range focus on enemies with RPGs and AT rifles. 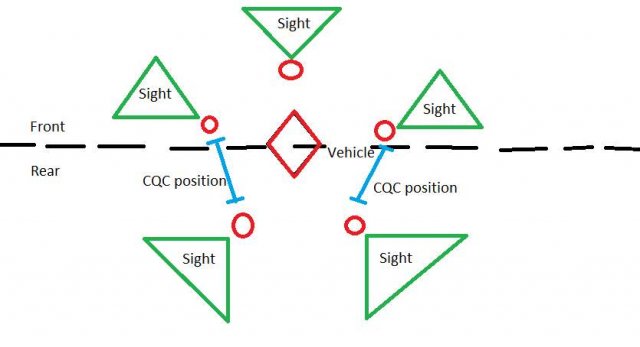 In the image, the light blue line indicates the position where the CQC soldiers must be moving, depends of the situation of course.
Also, the rear soldiers must not stand in the retreat way of the vehicle, if anyone survives a gunfight MUST be the vehicle, the troop its there to protect it, not hide behind.

The upper terrain its been always a highly important strategic advantage, and both factions can turn the tide of a battle if manage to control a higher area. In order to succeed and assault to a higher position, the most recommended way its to strike with indirect fire the enemy positions first.

Also the factions tend to use two separate forces if the terrain allow it, one distract, the other group flank.

Extreme casualties if a direct assault without support happen, most probably will fail. 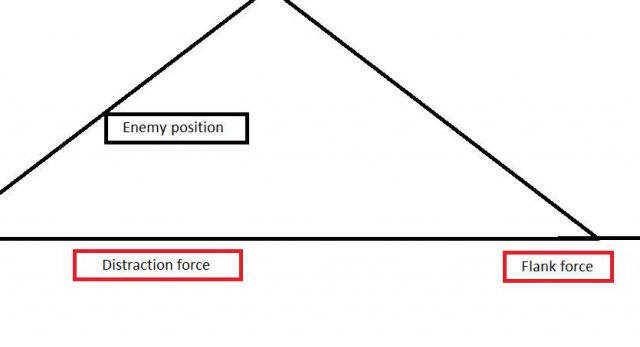 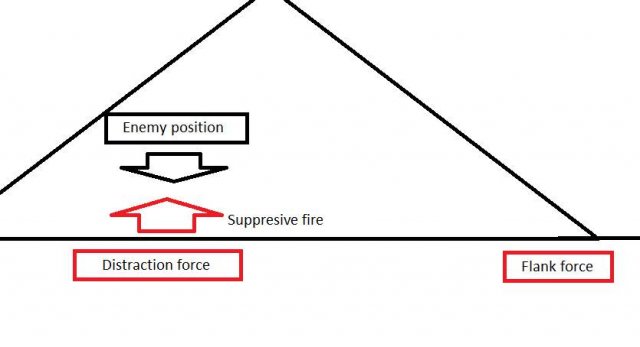 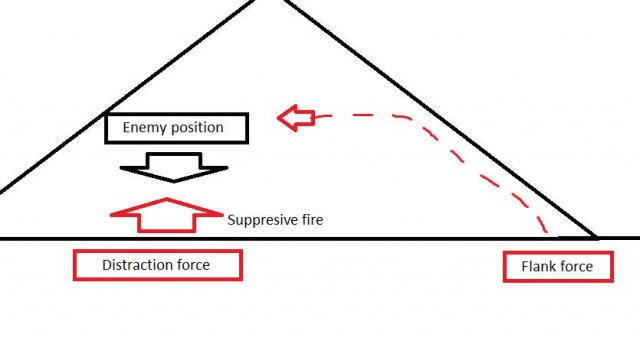 Uphill battle its a very difficult one if the high terrain faction manage to fortify the position, in such case, heavy bombardment and gas tend to work far better, at expense of more resources of course.

The CPO has confirmed a terror tactic used during the war, where enemy soldiers dont kill the opposing faction troopers, instead they let the enemy bleed out, traumatized in order to use him as bait, and finally lure more enemies to assist his comrade. 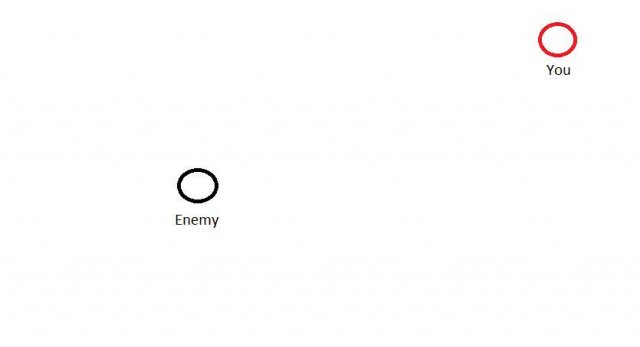 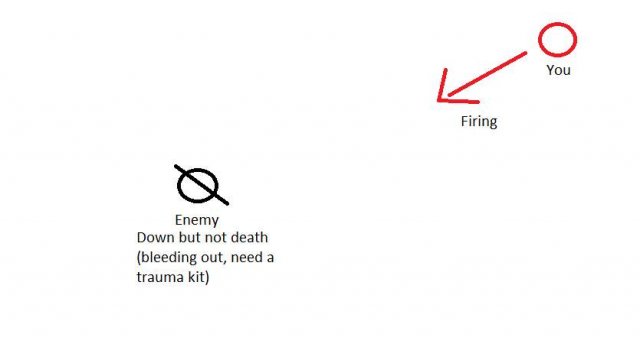 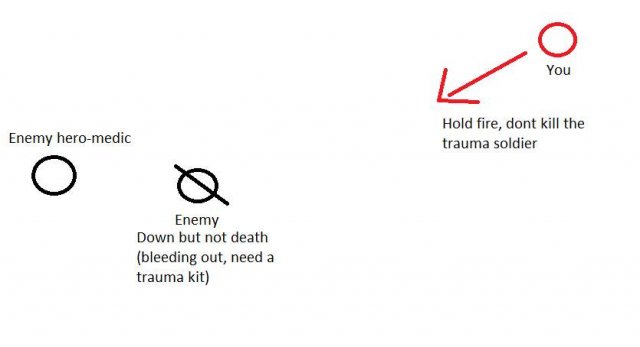 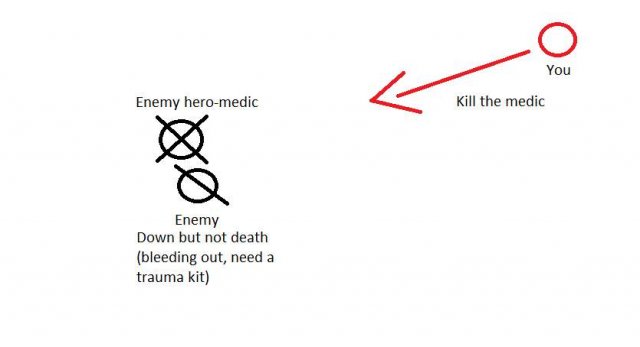 Based on the premise “they dont have enough bullets for all of us!” Its not uncommon to see mass infantry charges in the war, both factions tend to use this in order to overwhelm with numbers the enemy positions.

If the enemy doesnt count with many static defenses active, it can prove worth, but consider inmediatly you are not gonna to survive. Bayonets, suicide grenadiers, and CQC weapons are recommended in case of this….”tactic”.

This tactic paired with smoke or during night time can work pretty well. Just never, never, NEVER, charge straight ahead without a clear role, meaning, what will you do during the charge? Bayonet? Throw grenades? Smoke? Provoque enemy defenses to friendly fire the enemy? In the heat of the charge its easy to get lost, so go with one and only one objective, do it, and if the miracle of survive happen, please consider a better tactical aproach next time, mass charges pressure logistics to almost a breaking point, even more when its done in a dumb way.

A experimental tactic. Due the fact both nations have broken POC chemical warfare restrictions, the use of green ash could be worth in a mass charge.

The filters of gas mask burn out quickly, and there is a high chance the enemy won’t be using all the time a mask and a bunch of spare filters.

So many officers during the war had developed a terrorific tactic. Equiping chargers with gas masks, one or two filters, and a few green ash grenades, move as a single squad and gas the enemy position, keep moving forward until you ran out of gas, filters, die, or suceed.

This is just a gathering of tips for Foxhole that newer players should follow and try out. Other Foxhole Guides: Logistics: The Fundamental Guide for New Players. Weapons Damage Guide. […]

Foxhole – How to Get Free Tanks

In this, you’ll learn the basics of playing Foxhole. From basic movement, navigating the ingame world, weapon handling, and spawning into your first battle. This covers the basics you’ll want […]