A medical guide meant to help crewmembers understand how to properly use medicine. While not as in-depth as other medical guides, this guide provides important tips and protocols for treating the afflicted, and provides a basic understanding of medicine to otherwise ignorant crewmates.

I’m going to start off with basic information before I go further into depth. I highly recommend everyone reads this guide, because if you don’t understand meds well you’re probably gonna ♥♥♥ yourself over eventually. Thanks to the Halloween update, the most common cause of death is now opiate overdose. There are several types of damage and afflictions that someone / something can suffer, I’m going to inform you on all the possible afflictions and their treatments, without going too in-depth. The treatment options will be underlined, in order of most recommended to least. Also, remember that when I say “opiates” I am referring to opium, morphine and fentanyl. Morphine and fentanyl are advanced forms of opium.

I’m going to show you all the medical items now, and inform you on their effects and uses. I’m not going to go over any items that don’t give effects, or cures for most poisons since they’re pretty obvious as to how they look and work. Also remember that in-game sprites look different from in-inventory sprites. Take a look at the visual guide for help. You may not get as many uses out of a medical item if you skill is low, and the effectiveness will also be poorer. 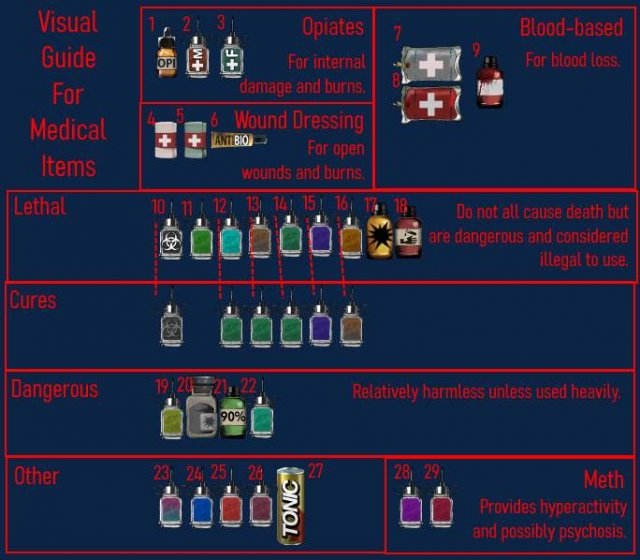 This information is very valuable to everyone, even non-medics. However, please remember that if you are not a trained professional, your treatment will be less effective. If you aren’t trained, you should also avoid performing CPR, as it will typically only cause more damage.

The Patient is in Critical Condition and / or Unconscious

Quickly figure out the most urgent health issue to address. Remember that the patient may stop breathing if unconscious for too long, and you should always consider this. Opiates also cause significant oxygen loss and overdose, so avoid resorting to opiates.

The Patient is Infected With the Husk Parasite

The patient is in the early stages if they do not have a visible husk appendage.

The patient is in the late stages if they have a husk appendage, or have already been taken over by the parasite completely.

The patient is nearing death due to an opiate overdose and / or withdrawal.

In the event that somebody is suffering from oxygen loss, the best solution is to provide the patient with oxygen and perform CPR. However, untrained crewmates will often do more harm than good. Remember that if you are not a doctor, you may only harm the patient with CPR. The best alternative is to administer stabilozine, liquid oxygenite, or deusizine. Get a medic to the patient as soon as possible, and allow the doctor space to perform CPR and treat the patient.

All doctors spawn with health scanners, which provide an overlay telling you about the health stats of whoever/whatever your cursor is over. This is very useful for identifying issues quickly. Typically, you’ll want to treat the affliction that is increasing most rapidly. The severity of afflictions range from 1%-200%.

Hopefully you can see why it’s best to leave doctoring to the real doctors, and this is why I prefer medbays being locked off from the general crew. Anyone with a little bit of morphine can quickly kill someone. To sum things up:

The Reactor is a semi-complex machine in Barotrauma but no worries! I’ll teach you how to efficiently work this lad out. Other Barotrauma Guides: Submarine Editor Basics. The Medical Doctor’s […]

The Barotrauma dev team’s official manual for building your own fleets. It’s the first, quick version, and a more in-depth guide coupled with a proper video tutorial is planned. This […]