This guide is a quick reference to deciding if a frigate is worth buying.

Guide to Buying a Frigate

Buying a frigate presents the player with a host of information, but it takes some effort to dissect the display and come up with a determination of if the ship is actually worth taking. All frigates can improve themselves, but many already have some of that potential unlocked when you buy them. A strong frigate may be strong only because it has already unlocked its potential, and can grow only a little. A weak frigate may be able to grow much further.

This guide focuses on providing the information necessary to get a full understanding of a frigate’s potential.

This guide was written as part of deciding on a Class-S Combat Frigate, the MV-7 Edogawa Prospector, pictured to the side. It will be used to provide an example in this process. 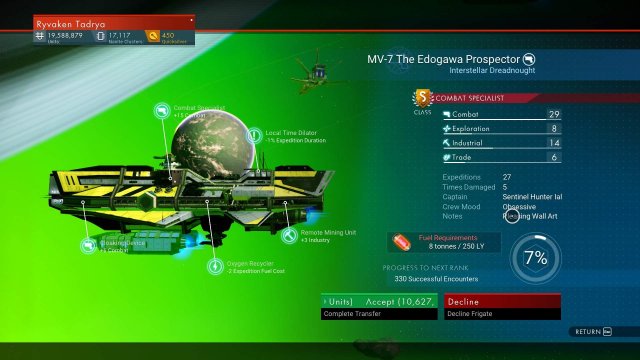 Frigates have four numerical statistics; Combat, Exploration, Industry, and Trade. These statistics are ultimately the most important part of the frigate as they determine the success and failure of any given expedition. To this end, the player is advised to get the best frigates possible.

According to examination of game files as reported to the No Man’s Sky wiki, any expedition can run a check on any statistic, although expeditions lean heavily on the statistic aligned with the expedition’s type and less on off-type statistics. For this reason, it is better to get an overall best total among statistics than to emphasize a frigate’s specialty.

A frigate’s displayed statistics are a sum of three values: its original base statistics, its gains from levelling up, and its traits. While only the final value matters, understanding the math allows one to judge the potential of a prospective frigate.

The frigate’s specialty does not directly alter its statistics, but it does change its access to statistic-improving traits.

The MV-7 is a Combat Specialist.

Every frigate has a specialty trait. For most frigates, this is a +15 bonus to the statistic of its specialty. Support frigates instead get a -15 fuel cost reduction. These traits are always present on every frigate and have no bearing on a frigate’s overall potential.

Some frigates have negative traits, shown in red, that decrease their statistics or increase their fuel rates. These traits are always lost as the frigate gains levels. While they can be annoying, a frigate with negative traits can grow to the same heights as any other frigate. Even the worst negative trait will vanish and be replaced with a positive trait in time.

Other positive traits are fixed. Positive traits can improve statistics, speed expeditions, harden a frigate against damage, or decrease the total fuel cost of an expedition. Once a trait is assigned it is permanent, and cannot be lost or improved.

The MV-7 has five positive traits, which can never change. It has a +6 bonus to Combat, a best in its specialty, and a +3 to Industry, a best in off-specialty. The other two traits, expedition duration and fuel cost, are the weakest examples of weak traits. This is a mixed bag.

A frigate levels up ten times based on its number of expeditions. Each level-up adds one point to each of its four statistics and two additional, randomly assigned points, for a total of 6 points per levelup. Existing frigates already have these levelups added to their statistics, which makes them more powerful right now but may make them poor in overall potential.

Frigates can either lose a negative trait or gain a positive trait when they level up. Positive traits are never lost or upgraded in this process.

Fuel cost is not changed by leveling up, except by the removing of fuel-consuming negative traits.

Levelups occur at the following number of expeditions completed:

The MV-7 has completed 27 missions and has leveled up 4 times.

Fuel costs are always expressed as a number of units per 250 light years. In planning an expedition, this rate is used to calculate the total fuel consumption of the fleet, then any fuel reduction traits are subtracted from that total, then finally the remainder is rounded up to the nearest unit of 50.

Small fuel reduction traits have limited value; they apply a flat reduction to the total and thus are often lost in the rounding. Support ships, with their larger traits and lower rates, are an exception to this rule.

Fuel increase traits affect the rate itself and can thus have a large effect, but like all traits will eventually be lost.

Fuel rate can be increased by negative traits, which will vanish as the frigate gains experience. Other than that, fuel rate is fixed and a frigate never becomes more economical.

The MV-7 has a fuel rate of 8, the best a combat specialist can hope to have. It also has a weak fuel reduction trait, but that isn’t a factor in the ship’s worth because the trait’s effect is too small to matter in most circumstances.

To find the Base Stat Total:

The base stat totals observed have ranged between -5 and +14, with an average of 4 to 5.

The MV-7 has a base stat total of nine. Above average, but not super.

The MV-7 has a mix of good and bad traits, a good stat total, and excellent fuel efficiency. On this basis, it is a good ship to have. It will never stand out as exceptional, but it will do its job well. I purchased the MV-7, and while I am certain I paid too much for it, I am equally certain that I will not soon replace it for something better.

No Man’s Sky – How to Utterly Destroy Economy

Here you shall learn how to make the Trade Terminals want to get rid of their Items. ContentsGuide to Utterly Destroy EconomyThe Inventory SizeLocate High Wealth SystemsThe Trading TrickYour Inventory […]

This guide aims to give players a run down on the frigate fleet mechanics the interstellar Freighters offer after obtaining them. It goes over Frigate types and how to obtain […]